In 1988, at the NASA/USRA (Universities Space Research Program) 4th Annual Summer Conference, Myrabo presented a paper titled
Apollo Lightcraft Project
. This paper was an in-depth look at a futuristic concept vehicle for launching astronauts into orbit in ships propelled by laser light.
5
In referring to the different phases he had envisioned for the manned versions of his vehicles, he had chosen to use the same names used in the original NASA manned spacecraft programs: Mercury, Gemini, and Apollo. The first design was to be a smaller unmanned Lightcraft, approximately six feet in diameter, though the basic design for all of the vehicles was very similar, something of an inverted acorn shape with the pointed hull facing forward during ascent (
Figure 14
). The smaller versions however, included a long and sharply pointed underside to aid in focusing the laser light. His designs then expanded to the largest Apollo model at nearly twenty feet across and with room for a crew of five. In the larger manned versions the pointed lower reflective surface was replaced with a blunt tapered shape that allowed for storage of a small amount of propellant that might be necessary at extreme altitudes. 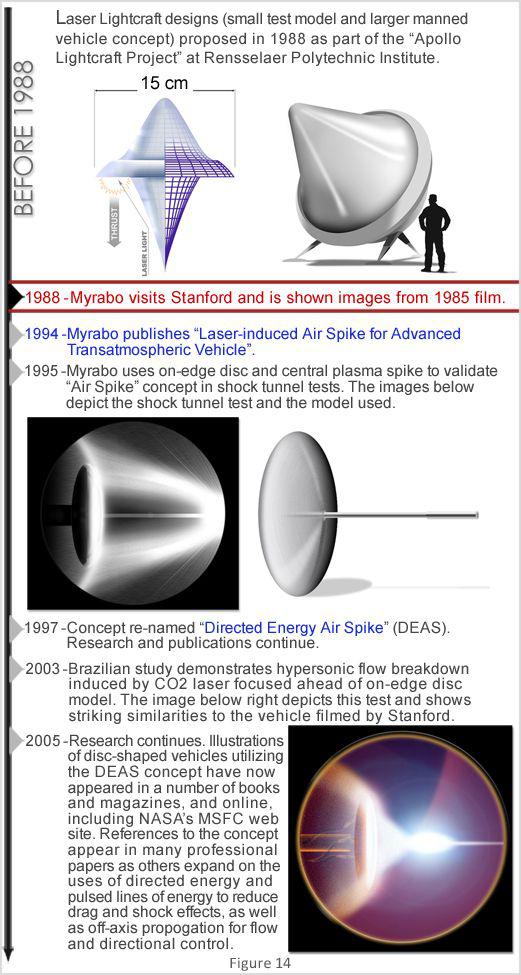 Rather than designing the vehicle with a separate engine, Myrabo’s concept turned the vehicle itself into the heart of the engine, with off-board lasers providing the energy source. There was no need to carry the weight of the propellant onboard during the trip. The unique unique tapered conicle underside of the vehicle focused the laser energy into a ringed shroud encircling the central body. There the focused energy would ignite the atmosphere and create a blast wave to propel the vehicle forward. The image of a vehicle riding a beam of light may seem like science fiction come to life, but the concept has been proven to work and could radically reduce the cost associated with launching vehicles into space. Unfortunately, at present, access to the laser power necessary to actually propel a Lightcraft all the way into space has been problematic.

Discovering that an engineer with the right background, something Myrabo certainly has, would be able to glean ideas from Ray’s film was not surprising. I have always thought it was strange that this phenomenon seems so often to be relegated to the domain of astronomers, at least publicly. Perhaps the long popular perception of UFO’s as vehicles from space makes astronomers seem like logical candidates to be experts. But when it comes to studying, analyzing, or examining evidence of technologically advanced vehicles, an engineer—an aerospace engineer in this case—is obviously a far better candidate for the job.

During this time I was still very interested in the events involving Paul Bennewitz. Though I had not been in contact with him for several years, what Paul had filmed and where he had filmed it had stayed in my mind. There had always been a strong possibility that he may have inadvertently filmed some extremely secret government or military project. There was no escaping the fact that they had been filmed over the grounds of Kirtland Air Force Base and the Sandia Military Reservation. For years there had even been rumors of material being stored in the four mountains east of Albuquerque, material other than nuclear weapons. If Paul had simply stumbled onto a secret U.S. project, and if that meant that someone somewhere had the knowledge and resources to build the vehicles he had filmed, I needed to find someone who might offer some ideas. Then it occurred to me, I did know someone who might help—Leik Myrabo himself might have some ideas. It would not hurt to ask, and a quick email would be just the ticket.

I wrote a short introduction explaining that I was a friend of Ray Stanford and that I knew he had been to visit Ray and had seen the pictures from Ray’s film. I explained just enough to let him know I was well aware of his connection to Ray. Then I asked if he, as an expert in aerospace engineering, would mind if I asked him a question on another issue, one unrelated to Ray. I sent the email and in a few days I got a simple two-word reply that I’ve never forgotten…”Fire away!”

In my second email to him, I began by referring him to a couple of online articles I had written about Paul Bennewitz’s experiences near Albuquerque and Kirtland AFB. Then I asked what I thought was a simple question. If someone in our scientific community could have built what Bennewitz filmed, who did he think might have been able to do it? I knew it was a hell of a question to ask and I half expected him to politely brush me off. Still, I felt sure that once he read my articles he would have to agree that it was an interesting case and that my question was certainly worth asking. I hit send, the email went on its way, and I sat back and waited.

When all think alike, no one is thinking very much.

As I waited and wondered whether I would ever get another response from Leik Myrabo, I occasionally searched the Internet for any new references to the Air Spike concept, the Lightcraft, or to him in general. One evening I made a rather startling find, especially in light of the fact that it was on a web page coming from RPI itself.

A course was being offered there under the name “Transatmospheric Vehicle Design” (TAVD). The images that filled the related web pages were of exotic disc-shaped vehicles, and it took no stretch of the imagination to see that, by anyone’s definition, these would easily have qualified as flying saucers. While the image I had originally found with the article in Popular Mechanics was very reminiscent of what was in Ray’s film, the images on the TAVD web pages contained even more elaborate vehicles. Silvery discs were illustrated soaring through the clouds, representing the potential of laser or microwave energy propulsion. All the images on the site presented the vehicle as a futuristic marvel. Also clearly illustrated, shooting forward from the center of the disc, was the telltale energy beam moving the atmosphere out of the way.

It was both exhilarating and frustrating to see what was clearly a concept derived from Ray’s film being woven into futuristic designs. For as long as I’ve known him I have encouraged Ray to reveal his films for everyone to see, to the extent that at one point I was actually signing my emails “your most persistent friend”. He deserves full credit for his years of determination and vigilance, and his success. When I saw the TAVD web site and the extent to which Myrabo was anticipating great things, I was still hopeful that sooner rather than later he would fully acknowledge Ray’s contribution and come out in support of his evidence. To me it was definitely prize worthy material. Myrabo may have decided not to answer my email from months earlier, but I had no reason to press the issue. I let it go for the time being. While it was perplexing not to get any response at all, I presumed he must have had his reasons. Still, I was curious what thoughts might be going through his mind and whether it mattered to him that I knew the things I knew.

But I was especially curious why, considering all that I knew, he never once contacted Ray to ask who I was.

In the following months I continued searching online for new articles and information about Myrabo and his Lightcraft. Not long afterward I happened across information that Myrabo had taken a sabbatical from his position at RPI. What was most surprising however, was learning that the Air Force was now supporting his laser Lightcraft experiments! Initially I had wondered if he had not replied to my earlier email simply because I had broached the subject of unidentified flying objects (though he knew full well what was in Ray’s film). Now I wondered if in writing to him I had unknowingly stepped into the middle of something else by asking him to comment on things that might be sensitive to the very people who were now supporting his work. Needless to say, I saw my hopes that this story would ever come out disappearing once again into the shadowy world of silence and military sponsorship.

All these coincidences only added to my frustration at seeing Ray and his incredible evidence going totally unacknowledged. So far as I aware, Myrabo had never spoken to Ray about the situation, which seemed to me to be almost beyond understanding. I thought again about Paul Bennewitz, with all that he had endured, being denied the respect he deserved as a concerned citizen who had tried to do the right thing. I may not have known enough to do more with the Bennewitz case, but I was certainly going to keep close tabs on this one.

"Those who say it can’t be done are usually interrupted by others doing it."

Although I had decided to say nothing for the time being, I was not about to sit idly by and do nothing. Being able to prove what I knew was still an issue, and to accomplish that I knew I would need good supporting evidence. To show that Myrabo’s Air Spike concept had almost literally come from “out of the blue” would involve watching for new scientific papers, articles, and experiments that followed his own and that built on the concept. I also began looking into earlier work on shock wave and drag reduction. How other researchers jumped in and explored and expanded on the Air Spike concept would demonstrate how new and original it was to the scientific community. Studying earlier work would also show that Myrabo’s concept was a previously unseen and unique idea. It would also establish that, prior to seeing the vehicles Ray Stanford had caught on film, none of Myrabo’s work had ever included a beam of energy firing from the center of an on-edge disc.

For several decades researchers have been studying ways to deal with shock waves. Since the mid-1950’s studies have been done using physical spikes to manipulate airflow, while other methods have studied injecting hot gases against the air stream, usually referred to as “counter-flow combustion”. Shock wave effects are an ongoing problem, and even now certain missiles are designed with a spike mounted on the nose cone to cause the shock wave to break ahead of the actual missile body itself. The reason many missiles have rounded nose cones is because that shape forces the shock wave to build up ahead of the missile body keeping the heat that forms from melting the nose cone itself. Sharply pointed nose cones are subject to excessive heating at the tip and can melt away. Any means of modifying the shock wave would have terrific benefits in addition to reducing drag. Reviewing a number of documents I have been able to find online, many from the American Institute of Aeronautics & Astronautics (AIAA), and looking through the numerous references to previous works cited, it was clear that finding ways to modify shock waves and reduce thermal problems had been a subject of interest to scientists for years. However, until a paper published by Myrabo and Raizer in 1994, no one had demonstrated using pure energy to create the shock wave out in front of a moving body, let alone use the process to other advantages as well.