Even if it had been possible to divert the light away from the mountain, there is still the matter of an intense blue-white burst of energy when the vehicles left the ground. As the vehicles raced upward they produced a bolt of energy that appears on film looking very much like an electrical or plasma discharge. This bright burst, stretching upward from the ground, can be clearly seen in one image. A similar blue-white burst appears on film close to one vehicle during a mid-air maneuver. It is inconceivable that this intense light would not have been easily visible, unless of course, the departures were planned for times when no one was expected to be outside watching.

Whether the vehicles were seen by the security personnel or not, the light from those brilliant vehicles left permanent images on the film Paul took those cold nights in the winter of 1979.

The Air Force and Sandia Security guards were expected to make occasional rounds, which Paul and his wife presumed were the headlights they had seen. The Air Force Security Police was the organization responsible for the area of the mountain complex itself and its guards patrolled inside the electrified perimeter fence.Looking at topographical maps, it is clear that the base of the hills two miles to the southeast is about two hundred feet higher in altitude than Paul’s home (
Figure 10
). From the roof of his house he would have been looking slightly above eye level. With the difficulty of judging distances at night, the strange vehicles he was watching could easily have been nearer or farther than headlights he observed. Even so, it is hard to imagine that they could have been missed by someone looking in the right direction at the right moment. Another curious observation Paul made was that when the strange vehicles were on (or near) the ground they appeared to be in a rough line and spaced about 250 feet apart. The separation of nearly 750 feet between the first and last vehicles does raise questions about the need for them to come down so far apart. Nevertheless, perhaps the trees, brush, and broken terrain had helped to obscure them from someone driving along the perimeter fence, presuming of course that the headlights were patrol vehicles. 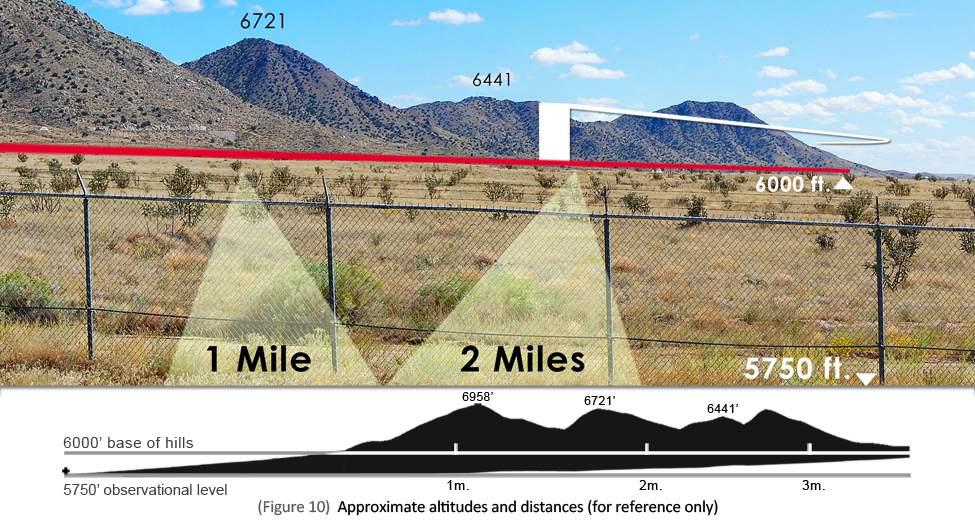 From Paul’s vantage point he also noticed some intriguing activity around one of the vehicles on the first night. Between one and two o’clock in the morning he saw what he had to conclude was someone walking around underneath one of the vehicles with a large flashlight. He used the term “flashlight” even though he specifically described the yellowish light as more intense and much larger than a typical flashlight beam. But it was clear to him from the motion and movement of the light on the ground that someone was walking around beneath one of the objects with what amounted to a handheld flashlight!

Having a good idea of where the vehicles were landing and being able to survey the area later in daylight gave Paul enough information to calculate their approximate sizes. Based on his calculations, three of the vehicles were approximately 18 feet in diameter. The fourth was twice that size, at approximately 36 feet across. Even though he saw them at night when it would have been difficult to gauge distances, he did know the distance to the mountains behind them, allowing him a baseline for his estimates.

The southernmost tip of the weapons storage area is about three miles distant. If the vehicles had been directly south of his position there would not have been any mountains behind them at all. Following a line of sight to where he had seen them he determinedthat the mountainside behind where they had been was about two miles away. Based on this, drawing a two-mile radius from his home and finding the spot where the mountains would have formed a backdrop presents an intriguing situation. If, as he described, the vehicles were between one and two miles away on a straight-line distance, then there is every reason to believe that they were down inside the electrified perimeter fence (
Figure 9.
) This is supported by a statement made by (then) Major Ernest Edwards, who was in charge of the security guards on the mountains at the time, that Paul had initially contacted him about what he (Paul) had seen “on the mountain”. 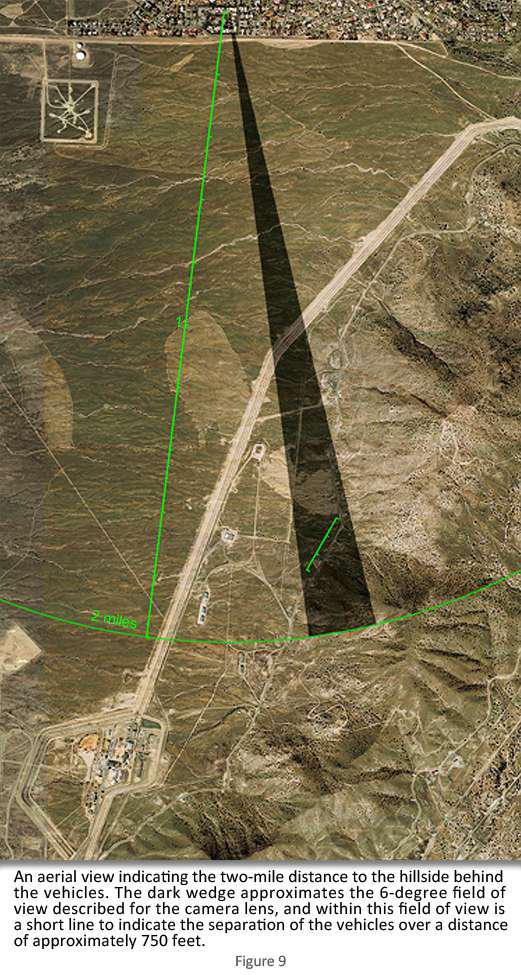 Though it may never be possible to say precisely where the vehicles came down, their presence clearly did not raise any alarms—at least none that Paul saw. That fact in itself is somewhat mind boggling if the vehicles were actually intruders. This was a highly secure area patrolled by trained guards responsible for protecting nuclear weapons and other classified material. Is it reasonable to believe that not one guard would notice several glowing vehicles entering the area and then pulsing in the darkness for several hours? Nevertheless, Paul apparently took the lack of alarm to mean that the guards were totally unaware of a potentially serious threat.

Sometime in the next few weeks, he placed a call to Air Force Security Police, spoke to Ernest Edwards, and reported what he had seen. At that point it is inconceivable that others in official channels would not have quickly learned about Paul and everything he had seen and done. However confused the facts became over the next few years, Paul’s entire reason for calling the Air Force—and what led the Air Force to his door to begin with—is traceable directly to what he saw and filmed those nights in December of 1979.

Kirtland Air Force Base, and land used by the Department of Energy, covers much of the area east of Albuquerque. This area, sometimes referred to as the Sandia Military Reservation, completely surrounds the four mountains of the Manzano Weapons Storage Area. East of the weapons storage area is a series of canyons that extend several miles into the Manzanita Mountains (
Figure 11
). Coyote Canyon, on the eastern side of the weapons storage area, stretches east toward Lurance Canyon, which surrounds a remote complex of buildings and structures. Lurance Canyon is the area alluded to in a controversial Air Force Office of Special Investigations (AFOSI) Complaint Form describing, among other things, an August 1980 incident in which several guards allegedly saw strange lights and a disc-shaped vehicle in the area (see Attachment A). (Considering the number of bogus documents and the disinformation that is now widely believed to have originated with AFOSI during that time period, this Complaint Form and its suggestion that a disc-shaped vehicle had actually intruded into the area should probably be considered highly suspect now.) 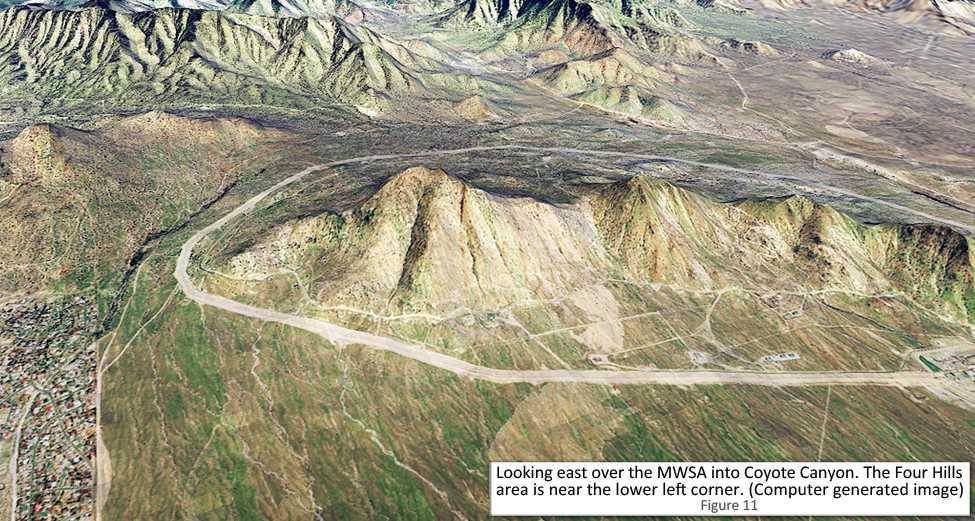 There has been speculation that what Paul saw might have actually been surveillance drones. The fact remains however, that his observations and descriptions—several eighteen to thirty-six foot glowing disc-shaped vehicles moving quickly into a sensitive military area and then sitting in darkness for hours while someone with a flashlight occasionally wanders around beneath them—do not suggest that as an explanation. The fact that Paul saw them enter the area from the other side of the mountains, stay for hours at a time and then leave, disappearing around the mountains again, makes it fairly easy to imagine something other than ‘intrusions’ may actually have been going on. It is also be worth noting that Paul never described seeing the vehicles he filmed dropping down out of the sky or of seeing any lights coming down or going up in the area east of the Manzano Weapons Storage Area. He saw them come in from the south around the mountains and leave heading south over the same route. Low flying vehicles approaching from the east could easily have traveled through Coyote Canyon to slip into and around the MWSA, as Paul described. Such a route would also have kept them over very secure territory the entire time. They would only have been widely visible on the west side of the weapons storage area for the few seconds it took to land and be lost in the darkness.

Something was definitely going on in the wee hours of the morning in late 1979. The flight path of the vehicles themselves makes a compelling case that they were trying to stay out of sight of the majority of Albuquerque, and very likely under the radar of the Albuquerque airport. The time, place, and temperature could not have been better suited to it. Wherever these disc-shaped vehicles came from and whoever was controlling them, it is undeniable that they were there and that Paul saw them and caught them on film. Every indication is that something extremely sensitive had been planned for a freezing moonless night when no one would have anticipated a civilian would be sitting on his roof with a camera.

Soon after seeing the vehicles and studying the films, Paul began wondering about how they were powered and whether it might be possible to detect electromagnetic effects when they were in the area. Unusual electronic frequencies in and of themselves, especially in the area he lived, would not have been enough reason to jump to conclusions as broad as potential alien threats. Still, film footage of bizarre vehicles, by any account “flying saucers,” possibly correlated with recordings of electromagnetic disturbances that occurred only when the vehicles were present—now that would be hard data, regardless of whose vehicles they were. With his background and expertise in electronics, and the facilities at Thunder Scientific at his disposal, he was in the perfect position to build the equipment he needed.

Though to my knowledge he never again described seeing the same vehicles he had seen in December, in short order (by May of 1980) he had a range of equipment set up in his home, including equipment intended to pick up video signals. Many of the later references to Paul’s work refer only to his detecting ‘signals’ and ‘frequencies’, both rather innocuous terms. The information I received from him indicates that he only began thinking about electronic detection in the first few months of 1980, after—and because of—those first sightings. Unfortunately, by that time he had already contacted the Air Force, and once they were aware of the situation, who can say if anything Paul saw or detected from then on was in fact “clean”.

One piece of equipment designed to detect fluctuations in magnetic fields was producing recording strips showing unusual disturbances. What may have been causing these fluctuations has been the subject of much conjecture because, understandably, any number of sensitive projects could have been going on in the area around Kirtland Air Force Base. Fluctuations in local magnetic fields would be very suggestive if he had been able to correlate them to vehicles like those he had caught on film. Signals, on the other hand, which generally imply communication or telemetry, could have been coming from anywhere…even across the street.

While Paul seemed convinced that what he was detecting was related to the vehicles he had filmed originally, just how it might have been related is a question in need of an answer. As an Air Force expert would later suggest, those frequencies could have come from any number of conventional sources in the area, and perhaps they did. Whatever Paul thought he was receiving, who or what was doing the actual transmissions remains a big mystery.