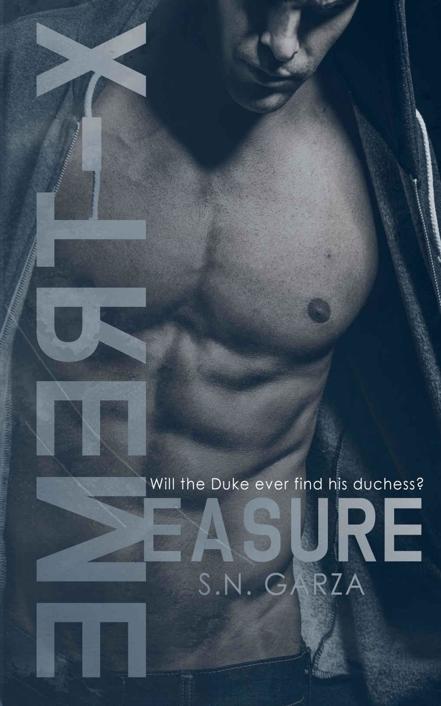 X-TREME MEASURE: where everything is for your pleasure.

Daniel 'The Duke' Greensboro wants nothing more than to take care of his little girl. Being a male stripper and escort made that happen. He wasn't looking for anything else. Until she moved into the apartment next door and turned his world upside down.

When Moriah's financial aid is cut off, she has to find a new place to live and going home to deadbeat parents wasn't an option. Finding a posh apartment in the heart of Houston was her only choice. She didn't anticipate meeting hot, sexy-as-sin, single dad Daniel Greensboro…the neighbor across the hall. When he asks for a favor, she just can't say no.

Then one night Moriah goes out with the girl's from work and they head straight for X-treme Measure. She has no idea what to expect, until she sees Daniel, heating up the stage.

Seeing Moriah at X-treme Measure is shocking but it provokes him to give her just a little tease of what she could have.

Sometimes you find love in all the wrong places. Every once in a while, it's so worth it.

This book is sold subject to the condition that it shall not, by way of trade or otherwise, be lent, re-sold, duplicated, hired out, or otherwise circulated without the publisher’s prior written consent in any form of binding or cover other than that in which it is published and without similar condition including this condition being imposed on the subsequent purchaser.

This is a work of fiction. Names, characters, places and incidents are either the work of the author’s imagination or are used fictitiously, and any resemblance to any actual persons, living or dead, business establishments or locales is entirely coincidental.

Available in eBook and paperback publication

Diamonds Are a Girl’s Best Friend

“Miss Augustus, I’m sorry, but you're no longer eligible for financial aid.”

I just looked at my academic advisor with wild, crazy eyes as he told me I was no longer getting financial aid for my tuition. This was not happening.

“I'm sorry? What do you mean? I support myself; have no help from anyone and I'm no longer eligible?”

Mr. Echols put his bony forefinger and thumb on the frames of his glasses and took them off grabbing a cleaning cloth with his other hand, he tried cleaning the ‘imaginary’ smudge on his glasses. I'm sure he was only doing this because he didn't want to see how freaked out I was becoming. And he was blind as a bat, so all he’d see was a blur. The blurry mess that was me.

The only financial aid I got was room and board. I had to pay for my food, books, and supplies.

I was majoring in Psychology, which wasn’t the easiest major to go for. I wanted to be a kid’s psychologist. I was in my third year, and everything had been working out just fine.

Mr. Echols sighed and pushed his glasses back on. With a look of pity and sympathy, he said, “I'm sorry, Moriah. The eligibility requirements have changed. You work on campus and with your job, you make just above what is required.”

“How am I supposed to find a place to live? I can't commute between Downtown Houston and Liberty. And I don't even have a place to live there anyway. My parents are deadbeats. That's too far. Just above, as in, what a few hundred dollars? Can't there be like an exception?”

“I'm sorry. If we give one person special attention—

“Mr. Echols, please. There must be something.”

“Of course you are. You don't have to keep saying it. It's not helping. Thank you, Mr. Echols.”

I got up, strapped my backpack over one shoulder and hurried out of the cold, sterile offices of the admin building.

This day sucked. Big. Balls. I already registered for classes in the fall. I had all summer to work and save but tuition money to hold a dorm had to be paid in advance. Could I get a loan? Doubtful. I had to save up four grand to buy my measly rust bucket Chevy Cavalier. Yeah. That's how old my car was. Ten years. It was in good condition with only a hundred thousand miles on it. I've had Rusty for almost three years. This was messed up beyond recognition.

The Texas summer heat hit me like a tidal wave as I pushed out of the building. Students were milling all around, unaware of my inner meltdown. I felt like I was about to hyperventilate.

I would have gone back to Liberty for the summer, worked at the Chili’s there to save money for books, supplies and the little stuff I needed. I definitely couldn’t afford campus apartments. I couldn’t pay thousands of dollars upfront and then have money left over for books. I was a full-time student, worked a thirty-hour job at the one of the local Chili’s restaurants and then I worked fifteen hours a week at the campus library.

I wasn’t kidding when I told Mr. Echols my parents were deadbeats. They were welfare people who used and abused the system as much as they could. I had the bare necessities growing up. As soon as I hit sixteen I practically begged the manager at Chili’s to hire me. I had tried other restaurants, but they didn’t want to hire someone with such little experience. And fast food places were not an option for me.

There was only so much Texas ghetto I could take. I had gotten a few raises since I had started working there and when pay check time came around, I had to give my parents ‘living expenditures’. You’re like what? I know. Sixteen, and I was paying my parents’ rent, bought my own food, and took care of buying myself clothes or whatever I needed, which usually came from Goodwill. And if I was lucky enough, they had some pretty decent items.

I had always dreamed of going to a university, living in a dorm, and being away from this place as much as possible.

I saved up for a car. Took me two and a half years of saving to get Rusty. I was proud even though she was a used, old car.

To get into college I did an extreme amount of financial aid programs, signed up for grants, and filled out scholarship applications. I had stayed away from loans. There would have been no way I’d be able to pay a loan back. I was able to get the Texas grant but it was only good for room and board. Which was great. I ate a lot where I worked, but I was only given so much, and with my diabetes and high metabolism, I ended up snacking a lot.

First thing, I needed to find a place. I had a few friends, but not people I felt comfortable with to ask if they wanted a roommate. I walked around campus looking at all the boards to see if anyone needed a roommate. A lot of college kids went to their hometowns for the summer, so it shouldn’t be too hard. I lived in the dorms for all three years I’ve been here. I knew I could probably live in one of the on-campus apartments but it was a bit more than I could afford. Like I said, upfront costs, not really my thing. Especially when I had financial aid to take care of that.

I snagged about five possible phone numbers that looked promising and headed back to my dorm room. I had a single bedroom, no roommate. Thank God. I liked my solitude. If I was going to look around Houston for a place, I’d have to room with someone. It would be bye-bye solitude, hello busy-roomie. I had a big work load this semester and had loaded down with so much crap, I had practically ran myself ragged. But it was so worth it, now that it was over. I couldn’t say the same during. It felt like I was going insane.

When I got inside my room, I dropped my bag onto my desk and sat down, taking out the numbers I had collected. Looking them over, I gave them better examination with price descending.

Ashley Wells. Roommate wanted. $430/month. Room with walk-in closet. Private bath. (Address given, no number. Not really smart. If I went there I’d have to tell her about privacy and safety. Although I don’t know if that amount was okay for me.)

I looked them over and then put my head down.

“God, please send me a prayer and a miracle none of girl’s are psycho, creepy, rude, mean, or crazy ass chicks with shit for brains. Sorry. Gotta survive in your big, scary world. A little help would be great. In your precious name. Amen.”

Okay. Sending up a prayer gave me just the juice I needed to call the numbers on these papers.

By the time I got to the fourth name, the three cheaper rates had found a roommate—which in my mind I'm thinking ‘Then get your ass out here and take down your advertisements, lazy losers.’ In which case I was almost feeling down and depressed. The fourth, Philys, didn't answer. So maybe I could try and call later. The one that only gave an address was only a five-minute drive according to my phone’s GPS, so I got in my car and got to a really nice apartment building. As in so nice I didn’t think $430 was enough. Was this chick for real? There’s no way someone would charge
only
$430. But since I was here, there was no use turning back. These looked like apartments people with serious money rented. Like two grand a month charge. Balconies and everything. Holy crap.

I walked up to the fourth—I tell you FOURTH—floor and realized I was totally out of shape for that kind of exercise. But I was desperate so I knocked on the door. I really hope she was home because I didn’t want to have come all this way for nothing. I faintly heard footsteps and then the door was opened to reveal a seriously hot guy. Like, muscular, tall, with milk chocolate skin and holy mackerel, blue eyes that gave me a run for my money. I could barely speak. I didn’t normally think myself attracted to guys like this, I mean hey, Shemar Moore, a.k.a. Derek Morgan from Criminal Minds was hot like lava but this guy? Wow.

“Hi, yes. I was looking for Ashley Wells. Is she home?”

The guy tilted his head to the side and looked at me with curious amusement.

“Can I ask why you’re looking for Ashley?” this guy talked like he should be an English professor.

“Yes, sir,” hey, the guy was older than me, maybe by five-six years, and I wasn’t about to disrespect somebody I just met. “I saw an ad on one of the community boards at school that there might be a room?”

Really? Was this guy really going to keep me from meeting the girl who lived here? I was getting irritated, add that with the four flights of hell on earth stairs and this hot as hell weather, and I was ready to smack someone.

“Listen, dude, it’s been a really rough day. If she’s not home, tell me now so I can keep looking. I mean, who would just charge $430 for a place like this? These apartments are at least two grand. And you have a balcony looking over Houston. Prime real estate. You know what? Forget it.”

I turned to head back the way I came when I heard a chuckle lift from his lips. Which was really annoying.