Read You Are Here Online 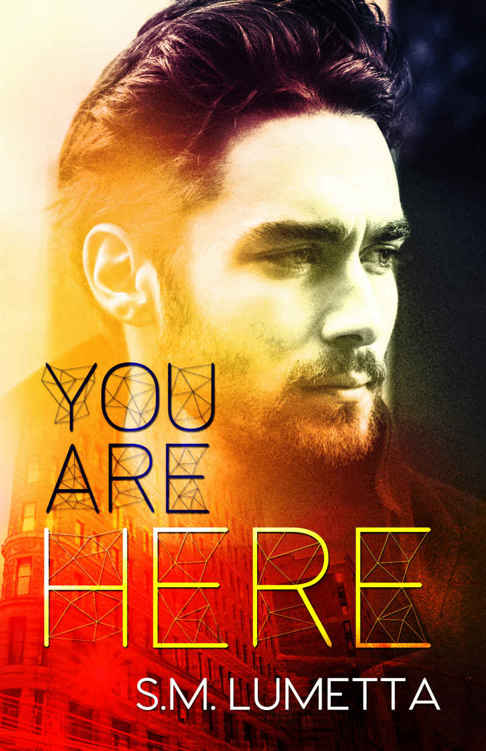 All rights reserved. No part of this book may be reproduced in any form or by any electronic means, including information storage and retrieval systems, without permission of the author — except reviewers, who may quote a brief passage in a review.

Printed in the United States by CreateSpace

For my mom, who refuses to let me give up. Ever.

“That’s not a feeling, Lucie.”

“You asked me to describe how I feel, Vivien. I woke up from a coma just …
blank
.”

“Fair enough.” Her smile was sympathetic, which was a little irritating. “I think you should call me Dr. Bonnar.”

“Fair enough.” I could hear the snark in my voice and wondered if I was always such a bitch.

She attempted to be subtle when she sucked her teeth in frustration.

I smiled like a brat. I hadn’t set out to be difficult, but mining for feelings I couldn’t describe grated against me.

“I’m concerned you’ve not had
any
significant emotional reactions upon discovering what happened to your parents. To
you
.”

“Amnesia provides a strange form of comfort in its emptiness.”

My fears, hidden between skin and sinew, sparked at the idea of complete memory inundation. I breathed deeply and exhaled the wave of stress. I pinched and scratched the hem of my hospital-issued pajamas. I wondered what my actual clothes had looked like before they were ash.

“I know what happened. My parents were murdered point-blank, execution-style. Whoever did it tried to kill me, too, and burn the joint down while they were at it.”

Her expression was pained, but I steamrolled forward, holding up my bandaged arms and fingers. “Got the burns to prove it, but only here. I can
see
them, feel the pain—well, until I get another dose of drugs. Apparently, I’m allergic to morphine. Didn’t know that, either.”

“It doesn’t matter though because I don’t feel a connection to any of it. Why do you keep asking me questions? I don’t have the answers. If you’re so smart, why don’t you tell me?” My voice rose and I cleared my throat, not ready to be repentant.

She pushed her glasses up her nose and sighed. “Examining how you respond to any information, personal or not, can open a path to memory.”

I rolled my eyes and couldn’t understand why on earth we kept rehashing facts that rang
no
bells whatsoever, specifically with such horrific details. Vivien Bonnar was a stunning woman—brilliant and well-spoken—and really getting on my nerves. Or maybe it wasn’t her at all.

“Am I doing a goddamn research paper? My
feeling
on this information is that it’s tragic. All of it. Sure, I want to know everything I used to know, but I don’t. And I can’t explain to you why that doesn’t upset me! I know it should and I know I should be sad, crazy depressed even, but I’m not. What can I do about that?”

I stopped when I felt my chest heaving, panting with quick frustrated breaths. I was beginning to think the good doc liked to piss me off on purpose. Self-conscious, I grabbed a lock of hair and twirled it before noticing that Vivien was watching me. I tucked the strand behind my ear, noting that something about the action felt wrong. My hair had caught fire and the hospital staff had apparently chopped off a great deal. Maybe my body remembered, even if I didn’t.

“Lucie,” she began with that microscopic smile I’d gotten used to being annoyed by, “you’ve been sitting across from me every day, sometimes twice a day, for weeks. Not once have you raised your voice to the point of showing anything but confusion, let alone anger.”

She just kept on with that pursed-lip smugness.

I took in a deep breath. “All right, you may have a point.”

The smile was more perceptible this time. “I’m not your enemy.”

“So, I can rule you out as the killer, then? Bonus. Session’s over,” I said quickly, my discomfort more palpable now. I stood. “I can go now, right?”

She glared over the top of her tortoiseshell glasses with her deep brown, almond shaped eyes, volleying between me and the seat I’d vacated.

I fell back into the chair. It wasn’t as if I had things to do or hordes of visitors waiting—in fact, I hadn’t had a single visitor since I’d woken from the coma. I felt a painful twinge in my chest.
Something
bothered me, but I hadn’t the first clue how to voice it. I was afraid it wouldn’t help to even mention it. My irritation waned, and I admitted to myself that the petulant act was likely overboard.

She shrugged. “You’re not my first rodeo, you know.”

She grinned, acknowledging my lame quick-change act while accidentally revealing a sliver of actual personality. “Definitely an inappropriate doctor-patient activity.”

“No sex, I swear.” I winked, bolstered by her amusement but it was short-lived.

“Let’s talk about the visions.”

I looked away as my stomach jumped and twisted as if attempting escape. They were the source, the reason
he
was all I thought about. I wished I’d kept that clairvoyant little detail to myself, as she certainly thought me a psycho while
he
was my beautiful delusion.

“I’d rather not,” I said, lost in his fathomless blue eyes and a smile like ice cracking as it corrupted his lightly freckled cheeks.

Reality slipped away while his words caressed my ears, tickling a waltz down my spine to the tips of my curling toes.

I shook my head, initially unwilling to speak. Blinking hard, my focus sharpened and our eyes locked. “Just remembering the first.”

The first.
Though not the only one I’d experienced since I woke up in the hospital several weeks ago, it was my most prominent rerun. Every word and its cadence, timbre, and note had been committed to memory like a favorite song, a looping soundtrack to the heartbreaking face cast on the back of my eyelids. How my skin anticipated his touch. I couldn’t begin to guess but I knew his hand in mine. I knew the heat of my body’s physical reaction. My veins pulsed with the need for him, a current of electricity that kept me moving and breathing. For the life of me, I couldn’t grasp why a man I’d never met was the key to the life I didn’t remember and to a love I could hardly dream of. How could a stranger be the reason to move forward? It was impossible to rationalize, but this connection was the only thing that truly seemed to soothe me.

Maybe that was why I didn’t want to talk about these “visions.” For someone who had no past to have issue with, there was more than enough emotion chained to my purported future to sink me. It was exhausting enough, trying to get through this therapy session.

I inhaled deeply and returned my gaze to Vivien, who—despite my fledgling doubts in her ability to do her job—was more at ease with my entire situation than I was. It was unnerving, but a serious goddamn relief.

“It’s all right.” Her voice slid downhill, a cushion of empathy wrapping around me as I heard a tissue pulled sharply from its box. “Here.”

Befuddled, I looked at her until I felt the tears running over my cheeks. Taking the proffered tissue, I pressed it to my face and briefly hid behind it.

“What am I supposed to do?” I whispered, shocked by the fear in my voice.

“Exactly what you are doing.” She made it sound like she hadn’t been trying to shove me off this cliff for the past three weeks.

“Because you need to.”

“Thanks, Vivi,” I said reflexively. It was both familiar yet foreign on my lips. The nickname had appeared on the tip of my tongue, though I’d never before thought to use it. I had purposefully ignored her request to keep the formalities because it felt like one thing I could control, but this was different.

Suddenly my breath stuttered, my eyes fluttered closed, and my nails dug into the upholstery as I tensed and I gripped the arms of the plush chair. Like trying to run away in a dream, I felt paralyzed.

A tall, broad-shouldered man stands grinning like the cat who ate the canary. The mantle above the fireplace behind him is decorated with a thick, green garland and scarlet silk ribbon. Multiple silver frames weave between the loops, displaying family pictures. It’s a Christmas party.