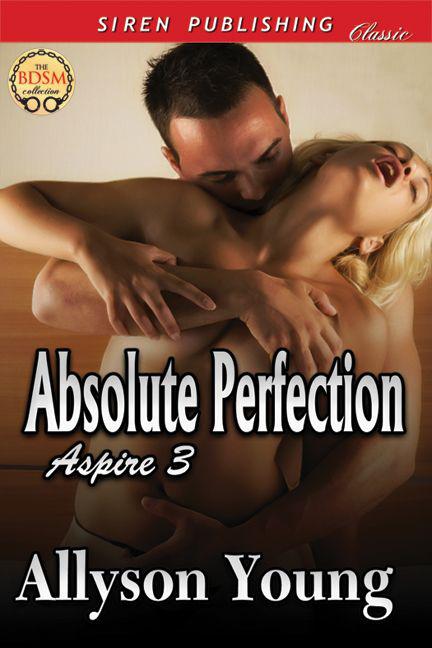 Georgios Andreas’s wife, Jane, left him and died under mysterious circumstances. Afterward, he avoided relationships outside of club play.

At a ceremonial claiming, he meets the sister of the submissive, there to bear witness to her sister’s claiming. Iris Snider draws him, initially because she looks like Jane, but he quickly realizes she is so much more. He is powerless against the attraction.

Georgios sweeps her off her feet, insisting she too is submissive. Iris, for the first time in her life, leaps before she looks. She falls in love and submits to Georgios, hoping for more than a D/s relationship, and he, too, dares hope for more.

Iris then sees a picture of Jane and is devastated by her resemblance to Georgios's dead wife. She refuses to take the leavings of a ghost. Georgios gives her space, inadvertently putting her in danger. Jane’s killer is still out there, and he, too, has seen the resemblance. And he hates George.

If you have purchased this copy of

by Allyson Young from BookStrand.com or its official distributors, thank you. Also, thank you for not sharing your copy of this book.

This is Allyson Young’s livelihood.

It’s fair and simple. Please respect Ms. Young’s right to earn a living from her work.

For Kathy. You try harder than anyone I know.

George Andreas ran his thumb across the lettering on the embossed wedding invitation. So Chalmers finally talked his sub into marrying him. Gordon Sinclair’s name wasn’t noted on the heavy white card stock, but George knew it was there in spirit, like some invisible absolute. Warren Chalmers and his best friend Gordon Sinclair were in a ménage with Haley Snider. He didn’t know all the details, but Haley had originally been with Warren, who’d pulled his usual
I don’t know if this relationship is what I really want
bullshit with the girl. Only this time the sub had given the Dom the kiss off. Talk about a wake-up call.
Warren
tracked her down and found her with his best friend, and somehow, instead of a throw down, they’d decided to share Haley. She’d led them both on a merry chase, but when
Warren
was hurt in some kind of altercation, saving Haley from a madman wielding a knife, it seemed she decided this ménage was the life for her.

And he was distracting himself from the emotional barrage the invitation stirred to life. Things still had a way of doing that, sneaking up on his blind side and reminding him of his own fuckup. Not that Chalmers’s situation exactly mirrored his own. Nope,
his
sub had run all right, but not because he’d driven her away. Or maybe he had. He came home from work that day and she was gone, with just a note saying she didn’t love him anymore and wasn’t interested in his Lifestyle any longer. George really didn’t know what had happened, and seeing as Jane was dead and the police were satisfied he had nothing to do with it, it was something he tried to lay to rest. Because there was no one to ask, and he’d explored all the avenues available to figure it out. He closed off that part of himself and built his business, attending the club for play and physical release. This man was indeed an island.

He tossed the invitation toward the trash. Chalmers would have invited him because he’d tried to find Haley for the other man, and
Warren
never forgot his friends. Friends. Well, more like business acquaintances. George didn’t have friends. And he didn’t do weddings.

“Mr. Andreas?” His temporary secretary leaned a hip against the doorjamb, her dyed blonde hair showing faintly green under the fluorescent lighting but not detracting from her pretty face and pert breasts beneath the clinging fabric of the top she wore. George noticed it all dispassionately. He never shit where he worked, although Eve clearly wasn’t averse to a little dalliance. His sexual expectations might just change her immature little mind, however.

Her smile faltered at his brusque reply, but she fluttered her eyelashes. “There’s a gentleman here without an appointment. He says he has information for you about a pressing matter.”

George managed not to roll his eyes. Mrs. Ward was on vacation for another week, and Eve wouldn’t be back as his secretary, ever. “Show him in.”

Eve flounced out, and he noted her high, tight buttocks, outlined by her little skirt. A crop would have those striped and pinked nicely, but she’d be screaming before he started. George spent time with trained submissives only. Not only would training someone new to the Lifestyle be too much work, he simply had no interest. Morgan Johnston poked his ugly face around the door, and George forgot all about Eve.

“Hello,
Johnston
.” George waited for the other man to state his business.
Johnston
wasn’t one of his favorite people, but he had an amazing talent for the nature of the work. People saw him as their nice old uncle or something and told him things they wouldn’t share with anyone else. He knew the man’s mind was a sewer. Private investigating tended to rub off on a person as they saw all the sordid things in life. George hadn’t fallen that far, he hoped.

Johnston
pulled out a little notepad and an envelope of pictures from his creased brown suit, and the next hour flew by as they compared information and put together a case that would make an aspiring local politician bow out of the next electoral race. The public didn’t like frauds and charlatans, even if politics and those less-than-inspiring attributes tended to go hand in hand. George ordered a check cut for
Johnston
on the spot and had the client on the phone almost before the door closed on him. Arrangements were made to share the information and the promise for immediate payment established.

He hung up and pressed his fingertips against his eyelids for a moment. It was the end of the day, and now he had to decide if he should go home to his empty house with only the television for company while he worked out in his basement gym or go to the club. The club option won, by a slight margin. He picked up the duffle bag he kept underneath his desk and shifted it to his other hand. It held his leathers and his favorite toys. He idly wondered who might be in need of some domination tonight and then shrugged. It didn’t matter. He took whoever was available and didn’t get close. George didn’t look inward very often, afraid of what he might find. Maybe something that had driven Jane so far away, something keeping him from picking up on a hint of what had gone wrong, blocking even a suspicion she was going to run from him…He pushed the thoughts away. The club would satisfy his sexual appetite and need for control, and he didn’t require anything more than that.

“George!” Warren Chalmers’s voice pulled him from his contemplation. He had been deciding whether to use his single tail or his favorite tool, a beautifully made crop. He and Alexis had come to an agreement for the evening, and the little blonde was a pain slut, so he wanted to choose wisely. She was also very talented in giving blow jobs, and George thought his energy level would probably equal hers tonight.

“Hello,
Warren
.” He made himself use the other man’s given name. Chalmers had become far more relaxed and nearly jovial since becoming established in the relationship with Sinclair and their little sub. “How are you?”

“I’m truly fine, George. Getting married, you know, and Haley is pregnant with our first child. Well, Gordon’s child, but I’ll get some practice for when the next one comes along.”

George belatedly remembered the wedding invitation and awkwardly offered his congratulations,
Warren
’s sincere happiness somehow managing to penetrate even his well-established ennui and cynicism. He felt himself smile and offered his hand. Chalmers was a good customer, too, and George found himself saying he’d take great pleasure in seeing him tie the knot.

Warren
laughed. “Hardly your style, George.” His face sobered, and he looked uncomfortable. George knew he was remembering Jane and cast about for something to say that would move things along, but
Warren
was recovering.

“Come to the ceremony here instead. I was just double-checking to ensure everything would be in place. Gordon can’t marry Haley, too, but we’ll be doing an exchange of vows here the week after the wedding in the church. Haley didn’t want a big deal, but we decided she deserved and needed it. We’ll make it the real thing here.”

George took a moment to reflect on how two dominant men somehow entered into arranging a vanilla wedding ceremony for their woman, their submissive, and then heard
Warren
’s words again in his head. She deserved and needed it. They knew Haley and made it happen. He wondered what that would be like, to actually know what a sub needed to make her happy outside of sex and discipline. He could read subs very well in the club. He never fucked up with any of them and was in great demand. But he’d failed at reading Jane, failed at reading his wife, in the outside world. He forced another smile and thanked
Warren
for letting him off the wedding hook and promised to attend the club ceremony. As
Warren
strode away, George snatched up the crop. Alexis needed him for his expertise, and he hung onto that thought like a talisman.