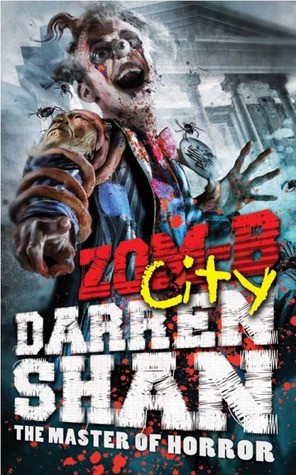 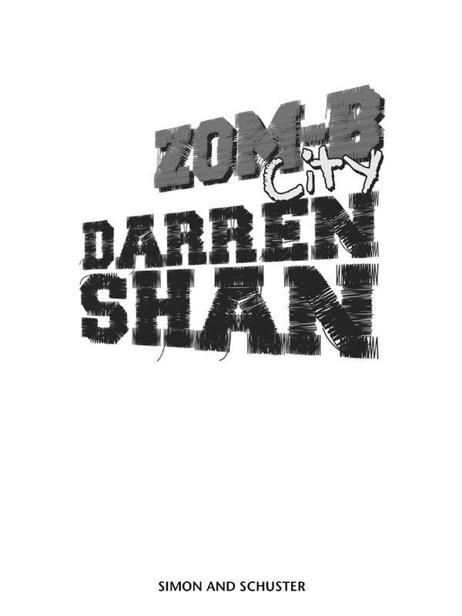 The right of Darren Shan to be identified as the author of this work has been asserted by him in accordance with sections 77 and 78 of the Copyright, Designs and Patents Act, 1988.

OBE (Order of the Bloody Entrails) to:

Edited in a swanky city apartment by:

A man with owl-like eyes visited Becky Smith one evening and told her there were dark times ahead. A few days later zombies attacked her school and one of them ripped B’s heart from her chest. But because the zombies didn’t eat her brain, she came back to life soon after her death, as a monster.

Most zombies were unthinking killing machines, but some regained their senses and became revitaliseds, undead creatures who could reason as they had before they died. But to stay that way, they needed to eat human brains. Otherwise they regressed and became savage reviveds again.

Months after her transformation, B recovered her mind. She was being held prisoner in an underground complex, guarded by a team of scientists and soldiers. She was part of a group of revitalised teenagers. They called themselves zom heads. When B refused to cooperate with her captors, all of the zom heads were denied brains as a punishment.

Shortly before the teenagers lost control of their senses, a nightmarish clown and a pack of mutants invaded the complex. The clown’s name was Mr Dowling. B had never seen him before, but she had crossed paths with a few of the mutants.

Mr Dowling’s followers uncaged the zombies and slaughtered any humans they could lay their hands on. The zom heads made a break for freedom. When one of them was found to be a living boy who had been disguised as a zombie, the others ripped his brain from its skull and tucked in. Only B resisted.

As B mourned the loss of her friend, a soldier called Josh Massoglia tracked down the zom heads and instructed his team to burn them to the bone. But for some reason he spared B and let her go. Weary and close to her conscious end, she staggered through a tunnel, out of the darkness of the underground complex, into daylight and a city of the living dead.

The sunlight is blinding to my undead, sensitive eyes. I try to shut my eyelids, forgetting for a moment that they stopped working when I was killed. Grimacing, I turn my head aside and cover my eyes with an arm. I stumble away from the open door and the nightmare of the underground complex, no idea where I am or where I’m going, just wanting to escape from the madness, the killing and the flames.

After several steps, my knee strikes something hard and I fall over. Groaning, I push myself up and lower my arm slightly, forcing my eyes to focus. For a while the world is a ball of lightning-sharp whiteness. Then, as my pupils slowly adjust, objects materialise through the haze. I ignore the pain and turn slowly to assess my surroundings.

I’m in a scrapyard. Old cars are piled on top of one another, three high in some places. Ancient washing machines, fridges, TVs and microwave ovens are strewn around. Many of the appliances have been gutted for spare parts.

A few concrete buildings dot the landscape, each the size of a small shed. I came out through one of them. I guess that the others also house secret entrances to the underground complex.

I pick my way through the mess of the scrapyard, steering clear of the concrete sheds, ready to run if any soldiers appear. I still don’t know why I was allowed to leave when the others were killed. Maybe Josh felt sorry for me. Or maybe this is part of a game and I’m going to be hauled back in just when I think that freedom is mine for the taking.

A stabbing pain lances my stomach. I wheeze and bend over, waiting for it to pass. The ground swims in front of my eyes. I think that I’m about to lose consciousness and become a full-on zombie, a brain-dead revived. Then my vision clears and the pain passes. But I know it’s only a short respite. If I don’t eat some brains soon, I’m finished.

I search for an exit but this place is a maze. I can’t walk in a straight line because it’s full of twisting alleys and dead ends. It feels like I’m circling aimlessly, trapped in a web of broken-down appliances.

I lose patience and climb a tower of cars. On the roof of the uppermost car I steady myself then take a look around, shielding my eyes with a hand. Exposed to the sunlight, my flesh starts itching wherever it isn’t covered, my arms, my neck, my face, my scalp, my bare feet. I grit my teeth against the irritation and keep looking.

The scrapyard feels like a cemetery, as if no one has been through it in years. I came out of one of the secondary exits. The main entrance must be housed elsewhere, maybe in a completely different yard or building. I’m glad of that. I don’t want to run into Mr Dowling or any of his mutants as they’re trotting back to wherever it is they hailed from. 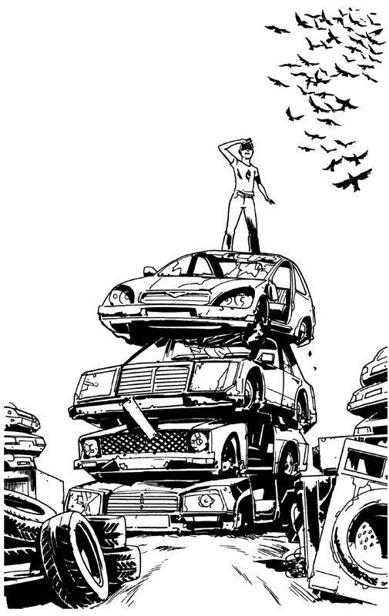 The yard is ringed by a tall wire fence. I spot a gate off to my left, not too far away, maybe fifteen metres as the crow flies. I start to climb down, to try and find a path, then pause. One of the concrete sheds is close by and there are a few piles of cars between that and the fence. If I leap across, I can get to the gate in less than a minute.

I gauge the distance to the shed. It’s leapable, but only just. If I don’t make it, the ground is littered with all sorts of sharp, jagged cast-offs which could cut me up nastily, even . . .

I grin weakly. I was going to say,
even kill me
. But I’m dead already. It’s easy to forget when I’m walking around, thinking the way I always did. But I’m a corpse. No heart – that was ripped out of my chest – and no other properly functioning organs except for my brain, which for some reason keeps ticking over. If I misjudge my jump and a pole pierces my stomach and drives through my lungs, what of it? I’ll just prise myself free and carry on my merry way. It will hurt, sure, but it’s nothing to be scared of.

I back up, spread my arms for balance, then race forward and jump. I expect to come up short, or to just make the edge of the roof. But to my shock I overshoot it by three or four metres and come crashing back to earth with a startled shriek. My fall is broken by a stack of dishwashers, which scatter and shatter beneath the weight of my body.

Cursing, I pick myself up and glare at the shed. I didn’t do much leaping around when I was captive underground. It seems the muscles in my legs are stronger than they were in life. I think I might have just broken the women’s long-jump record. B Smith — Olympic athlete!

I climb on to the roof of the shed and jump to the next set of cars, putting less effort into the leap this time. I still sail over my target, but only by a metre. Next time I judge it right and land on top of an old Datsun, a short hop away from the gate.

I stare around uneasily before getting down. I’m expecting soldiers to spill out of the sheds, guns blazing. But I appear to be all alone in the yard.

At the gate I pause again. It’s a simple wire gate and it isn’t locked. But maybe it’s electrified. I stick out a wary hand and nudge the wire with one of the bones jutting out of my fingertips. The gate swings open a crack. Nothing else happens.

One last glance over my shoulder. Then I shrug.

‘Sod it,’ I mutter and let myself out, slipping from the scrapyard into the silent, solemn city beyond.

The area outside the scrapyard is deserted. Old boarded-up houses, derelict for years. Faded signs over stores or factories which closed for business long before I was born. The only thing that looks halfway recent is the graffiti, but there’s not even much of that, despite the fact that this place boasts all the blank walls a graffiti artist could dream of. It feels like a dead zone, an area which nobody lived in or visited any time in living memory.

I stagger along a narrow, gloomy street, seeking the shade at the side. The worst of the itching dies away once I get out of the sunlight. My eyes stop stinging too. The irritation’s still there but it’s bearable now.

Halfway up the street, the stabbing pain in my stomach comes again and I fall to my knees, dry-heaving, whining like a dying dog. I bare my unnaturally long, sharp teeth and thump the side of my head with my hand, trying to knock my senses back into place.

What Doesn't Kill You Makes You Zombier by Wade, Allison
The Uninvited by William W. Johnstone
L. Frank Baum by The Master Key
Dead Wrong by Mariah Stewart
Tipping Point in the Alliance War by Lefler, Terry
JF03 - Eternal by Craig Russell
Run Wild With Me by Sandra Chastain
Temple of the Traveler: Book 01 - Doors to Eternity by Scott Rhine
Death in Gascony by Sarah d'Almeida
Beastie Boys&#146; Paul&#146;s Boutique by LeRoy, Dan