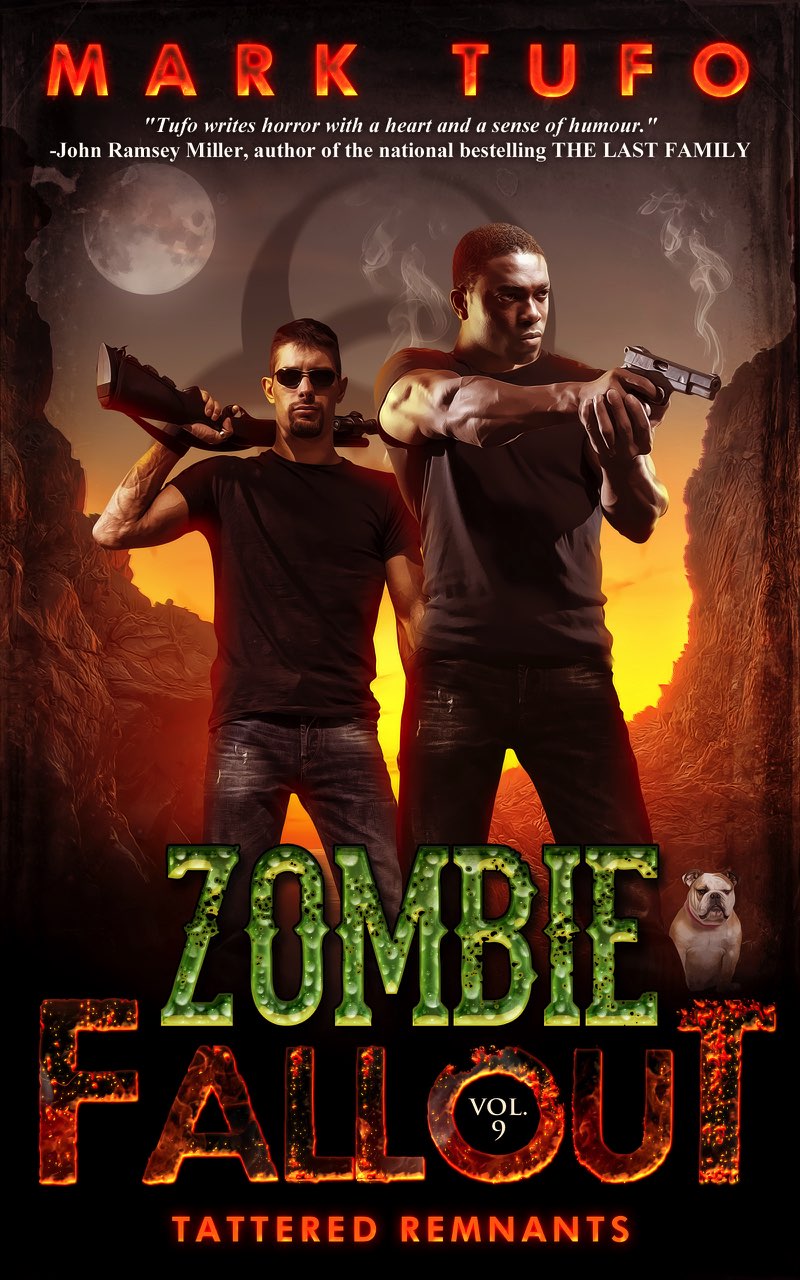 This ebook is licensed for your personal enjoyment only. This ebook may not be re-sold or given away to other people. If you would like to share this book with another person, please purchase an additional copy for each recipient. If you're reading this book and did not purchase it, or it was not purchased for your use only, then please purchase your own copy. Thank you for respecting the hard work of the author.

Discover other titles by Mark Tufo

and
http://zombiefallout.blogspot.com/
home of future webisodes

editing by Lisa and Tommy Lane

T
o the wife
: I don't think the missus gets it. Without you woman, none of this is possible. I love you.

To my beta readers: Kimberly Sansone, Vix Kirkpatrick and Susan Di Muzio, words really only scratch the surface. Your attention to detail and your unique approaches to my books help me put my best foot forward and for that, thank you.

To Laura Blair and Richard Ilsley their vivid imaginations have brought to life some of the worst pop-tart flavors imaginable!

To all the first responders and members of the armed forces. You help to make our country the great nation that it is, the Tufo family will forever hold you in our thoughts and prayers. (To those three cops that let me slide after my recent bout of speeding violations, the barbecue starts at two)

T
his is just
a small token of appreciation for my fans and those that have helped out along the way, whether through helping to fund our Kilts That Care fund raiser or leaving responses on our podcast! And also a small shout out to the admins for my fan pages in the US and the UK, Pauline Milbourn, Kathy Pippen Turner, Jeff Smith, Baylie Poller and Richie LoBo Edgar Shiers, you guys do a bunch of work and I just wanted to let you know I greatly appreciate it!

A
hearty thank
you to everyone that donated on the GoFundMe campaign. The families that receive your donations will be most appreciative!

M
rs. Deneaux felt pretty
good about herself as she exited the Demense building. Tommy hadn't necessarily been her enemy, but he was aligned with Michael, and that bastard had a way of inspiring those around him to be relentless in pursuit of his adversaries. She walked into the garage. She would have preferred one of the Cadillacs or Mercedes Benzes parked there, but instead settled for one of the military trucks, knowing that it would not need keys. She started the engine before lighting a cigarette. She let her head rest against the back of the seat while she exhaled a large plume of smoke.

“There were times, Michael, I did not believe I would beat you. You were a worthy adversary.” She took another drag. It was lost on her that Mike didn't consider this survival of the fittest but rather survival of them all. “I will miss you.” Then she cackled, “Not really.” She was half way through her third smoke when a zombie smacked up against her window. She calmly rolled the window down just far enough to put the barrel of her firearm through before placing a round neatly between its eyes. She backed the truck up and pulled out of the garage.

“Now where, Vivian?” She drove a block away and parked in the parking lot of a long-disused electronics store that had closed its doors a few years previous. “First things first. I'm going to need more cigarettes and bullets.” She'd checked the stores for both, and they were dangerously low. “Should I go back to the Talbot stronghold? Those twits would let me back in. How rich would that be to find refuge among them!” The truck was in drive, and she was just about to get going when the first shells rained down upon the building she'd just vacated.

“What's this? A cigarette and a show, how nice.” She sat back and reveled. Her icy blood ran colder when she saw the van barrel out of the building from the same egress she'd used. “It can't be!” she shrieked. A small coughing fit erupted as she swallowed an intake of smoke incorrectly. “You cannot have lived, not after that!” But she knew better. Michael fucking Talbot had once again cheated death.

Vivian couldn't remember ever being so angry and enthralled at the same time. She held some self-directed anger for ever allowing herself to get on the other side of such a fierce enemy, but even more for not just ending it. Never before had she allowed such a threat in her life to go untended for so long. “Only one of us can be standing when this is all over, Michael, and I fully intend on it being me. We'll meet again, someday. I'm sure of it. But for now, I'm going to dig my toes into the Pacific Ocean as far away from you and yours as I can possibly get.” She drove off.

D
uring the ride
back from North Carolina, I was as emotionally high as I could remember being since the zombies had come. What I would feel going forward would always be tempered with the losses we'd suffered along the way. So the baseline would be a lot lower to start with; it was an evil born from the devastation. Still though, to feel elation, love, accomplishment, just the mere fact of being alive, healthy and among friends and family was nearly beyond words. Of course it was short lived and false, but we had it in our grasp, if only for a moment. We did not tempt fate much on that trip. We topped all the vehicles off with gas and filled everything else that even remotely resembled a liquid container so we would not have to stop again. We took shifts driving, and in twenty-four hours, we had gone from our own reunion to pulling into my brother's long, lonely stretch of dirt roadway for another.

There was a moment when we were coming in that I thought I was hallucinating. My Jeep, my awesomely beautiful fire engine red Jeep, was parked off to the side. But that wasn't possible. There was no way in hell anyone would risk their lives to go cross-country to retrieve it. As nuts as I sometimes could get, the thought of doing this would never cross my mind. Okay wait, that's a falsehood. I have thought about it. Although for the sake of fairness, I've also thought about riding a whale and eating thirty-six hot dogs, none of which I would actually carry out due to the potential liability. And to be honest, I would be pissed at whoever had done it here. To what fucking point?

“Mike?” Tracy had asked as I walked around the Jeep.

“Well there's still Henry drool down the back windshield, I'm sure I could get that DNA tested. But unless someone is really into master pranks, I'm not sure how they could have known what license plate to put on. I had Marine Corps plates. When the state of Colorado offered them I was like “Hell yeah!” Figured I was even going to get a little discount on them for my time in the service. Gotta admit I was a little let down when they charged ten dollars more for them. I opened up the side door; dog smell came out. Henry barked like mad as BT took him out and placed him on the ground. He rushed over to me and placed his paws on the running board. This was my cue to pick his ass up and place him inside. He started sniffing like someone had rubbed bacon all over the back seat.

His stub of a tail would alternate from swinging back and forth wildly to going stiff as a board when he came to certain scents he wasn't sure about or did not like.

“Someone that knew it was at the sheriff's in Vona.” I looked up to Ron's house. It was just then I noticed how dark it was, and I also saw no movement. We hadn't come in beeping horns and playing rock music loudly, but still it was three cars in a world gone silent. We should have been heard for miles. I got a sick feeling in my stomach. Had my Jeep been used as a Trojan horse? But those particular enemies were dead. Weren't they?