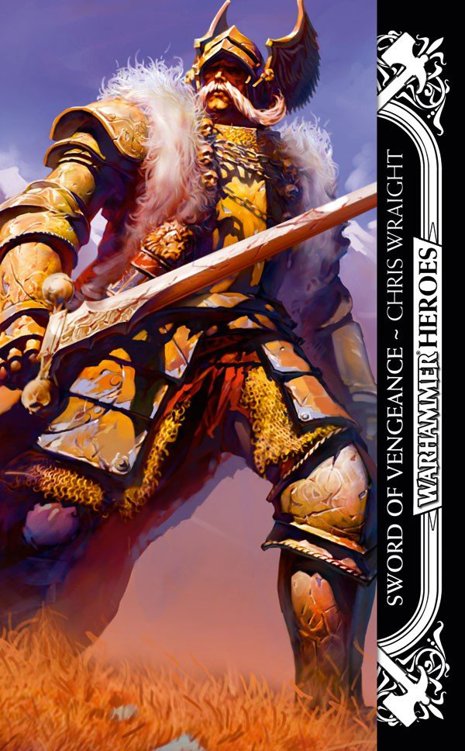 A WARHAMMER NOVEL
SWORD OF VENGEANCE
A KURT HELBORG NOVEL

This is a dark age, a bloody age, an age of daemons and of
sorcery. It is an age of battle and death, and of the world’s ending. Amidst all
of the fire, flame and fury it is a time, too, of mighty heroes, of bold deeds
and great courage.

At the heart of the Old World sprawls the Empire, the largest
and most powerful of the human realms. Known for its engineers, sorcerers,
traders and soldiers, it is a land of great mountains, mighty rivers, dark
forests and vast cities. And from his throne in Altdorf reigns the Emperor
Karl-Franz, sacred descendant of the founder of these lands, Sigmar, and wielder
of his magical warhammer.

But these are far from civilised times. Across the length and
breadth of the Old World, from the knightly palaces of Bretonnia to ice-bound
Kislev in the far north, come rumblings of war. In the towering World’s Edge
Mountains, the orc tribes are gathering for another assault. Bandits and
renegades harry the wild southern lands of the Border Princes. There are rumours
of rat-things, the skaven, emerging from the sewers and swamps across the land.
And from the northern wildernesses there is the ever-present threat of Chaos, of
daemons and beastmen corrupted by the foul powers of the Dark Gods. As the time
of battle draws ever near, the Empire needs heroes like never before.

WHAT HAS GONE BEFORE

The first part of this story was told in
Sword of Justice.

The summer of the year 2523. The province of Averland has
been without an elector since the death of the mad Count Marius Leitdorf.
Wearying of the long process of selection, Emperor Karl Franz dispatches his
Champion Ludwig Schwarzhelm to Averheim to expedite matters, accompanied by his
personal spy, Pieter Verstohlen, and an army of Reikland halberdiers.

The electorship is contested by two men: Rufus Leitdorf, second son of the
old elector, and Heinz-Mark Grosslich, a relative unknown. During the long
months of conflict between them, Averland has drifted into misrule. Reports
arrive of orcs massing in the east, and most of Schwarzhelm’s forces are sent to
secure the distant marches. Back in Averheim, Schwarzhelm is subject to severe
pressure. When reports reach him that his commander in the east has been killed,
he immediately rides out to avenge him.

Meanwhile, Verstohlen investigates the origins of the
narcotic traffic in joyroot, and stumbles across Leitdorf’s wife Natassja at the
centre of a Chaos cult. Barely escaping with his life, Verstohlen flees to the
safety of Grosslich’s forces. Promising him the electorship if he will declare
war on the Leitdorf’s, Verstohlen instigates open conflict between the two
camps, and prompts the city Steward to send messages to the garrison of
Reiksguard in Nuln. These are commanded by Schwarzhelm’s great rival, Kurt
Helborg.

Schwarzhelm is swiftly victorious over the orcs and rides
west back to Averheim. On the way to the city, Schwarzhelm discovers the bodies
of messengers and half-burned orders which seem to implicate Leitdorf in their
murder. Nuln is referred to as well, fanning the flames of Schwarzhelm’s already
heightened suspicion of Helborg.

In Averheim, Grosslich and Verstohlen drive Leitdorf’s forces
to the edge of the city. As Helborg and his Reiksguard arrive, they see Averheim
in flames and Grosslich’s men running rampant. Helborg moves to quell the
fighting, takes Leitdorf into custody and begins to orchestrate the capture of
Grosslich.

Schwarzhelm arrives just as the fighting reaches its climax.
Seeing Helborg riding against Grosslich, he leaps to the conclusion that the
Reiksguard have turned traitor. Schwarzhelm’s anger, stoked by days of fatigue,
breaks. He fells Helborg with a terrible blow. Before he can kill him, the
Reiksguard manage to pull their leader from danger. Taking Leitdorf with them,
they flee the city, pursued by Grosslich’s forces.

In the aftermath of the battle, Schwarzhelm fulfils
Verstohlen’s pledge and crowns Grosslich Elector of Averland. He returns to
Altdorf, and is removed from active duty by a devastated Emperor. Disconsolate,
Schwarzhelm confides in his old mentor, the swordmaster Heinrich Lassus. During
the conversation, Lassus unwittingly betrays the truth: that Helborg and
Leitdorf are innocent, and Grosslich given over to Chaos, together with
Natassja. The two devotees of Slaanesh begin to enact their terrible plan for
Averland with all the resources of the elector’s office at their disposal.

Working alone now, Schwarzhelm vows to return. Leitdorf and
Helborg are hunted by Grosslich’s troops, moving from safe house to safe house
in an effort to evade detection. As Helborg fights for his life, surrounded by
enemies, the Sword of Vengeance lies in the vaults of the Imperial Palace, far
from its owner’s hands. 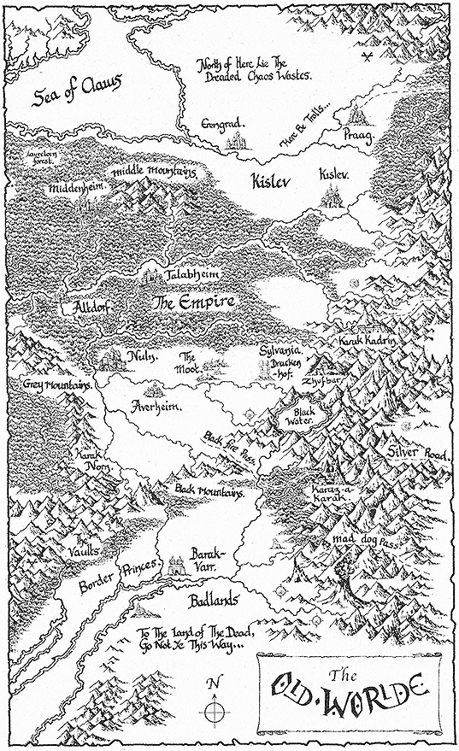 Running didn’t help. They were faster, unnaturally faster,
and they didn’t give up. Anna-Helena tore round the corner of the old bakery,
dragging snatched breaths into her overworked lungs, her fingers scratching
against the stone as she grabbed at it. The alley beyond was dark, far darker
than it should have been. She couldn’t see the end of it. Panicked, she started
to twist back around.

Then they were on her. Three of them, wheezing like animals.
She broke free of the first grasp, hearing the fabric of her dress rip and come
away in shreds. There was nowhere to go but further down into the shadows, away
from the horror, deeper into the cool valley between the silent buildings.

“Mercy of Sigmar!” came a voice, her own, shrill and
panicked, on the edge of hysteria. The sound sank deep into the uncaring stone.
There was no one awake to hear her, no one to come to her aid. It had been
foolish,
stupid,
to cross the river after dark. She’d heard the stories.
Everyone had. But the woman with the deep eyes had whispered such kind words,
and she’d promised root.

Her bare feet, criss-crossed with lacerations, made no sound
as she sprinted across the filthy cobbles. Her fear made her fast, even as her
tattered dress hugged at her thighs.

Not fast enough. She felt the first grip dig in deep, talons
sinking into the flesh of her shoulder. She was pulled up, dragged back. She
whirled round, ignoring the pain, trying to shake them off. Her heart raced out
of control, flooding her body with hot, terrified blood.

“Get off me!” Her voice was almost bestial with horror, the
cry of a prey animal.

Another of them seized her other shoulder, pinning her down.
Their weight was crushing, forcing her to her knees. She fought back, panting
and ineffectual. A blank helmet gazed down at her, distended into a muzzle.
Broken wheezing came from behind the closed grille.

“What are you?” she sobbed, slumping in defeat as the grip
tightened. They towered over her, the three of them, saying nothing, holding her
down. “Love of Sigmar, what
are
you?”

A fourth man appeared then, walking between them. She’d not
seen him earlier. He was short, hunched-over with age. He had the grey skin of a
scholar and black rings around his deep-set eyes. He pushed one of her pursuers
aside and grabbed her chin, holding her face up to the scant moonlight. She
gazed, trembling, into a cold and pitiless face.

“Let me
be…”
she protested, feeling hot tears run
down her cheeks.

The man ignored her, pinching her flesh and rocking her face
from side to side. He was looking at her like a housewife buying fruit,
assessing suitability.

She was dragged to her feet by the helmeted warriors. They
started to haul her back down the alley, back the way they’d come, back to the
building site and its hidden workings.

“Where are you taking me?” she screamed, jerking pointlessly
against their iron-hard clutches.

The hunched man smiled sadly at her. It had been spirited of
her, to run, but not much more than that. None of them got far.

Averland had sweltered under the beating sun for too long,
and the weather had turned at last. Cold air tumbled down from the peaks of the
Worlds Edge Mountains, ruffling the long grass of the plains and stirring the
waters of the rivers. The herds of cattle felt it as they grazed, as did the
peasants in their hovels. The wind had changed.

Averheim looked perfectly serene in the golden light of the
afternoon. The recent battles in its alleyways and squares had done little to
dent the facades of the elegant streets. More damage had been caused by the
months of dereliction beforehand, during which men had lain in the streets
half-sensible, their mouths open and drooling from joyroot. Back then
thoroughfares had succumbed to piles of filth, and sewage had been left to
gather in the heat, crawling with flies. Now discipline had returned, and the
drift of the past was being expunged.

After his coronation, Heinz-Mark Grosslich had moved his seat
of power from the ancestral Alptraum castle to the Averburg, the ancient citadel
that dominated the east bank of the river. Now the gold-rimmed device of the
boar’s head hung from every battlement. Signs of conflict, most notably in the
Vormeisterplatz, had been scrubbed clean by an army of drudges. The fires had
gone. Companies of armed men walked the streets at night, the merchant guilds
had come back, and trade along the river had returned.

Dagobert Tochfel, Steward of the Averburg, walked down the
wide avenue from the citadel to the Griffon Bridge, the oldest crossing over the
river. He could smell the water as he drew near, dank and cool. The worst of the
scum on its surface had been cleared away and the barges had come back. As he
went along the quayside, he could see at least a dozen of them, jostling and
bumping as they jockeyed for position by the warehouses.

Worth Fighting For (Little Blue Book 1) by Tigertalez
Halfway To Hollywood: Diaries 1980-1988 (Volume Two) by Michael Palin
Code Talker by Chester Nez
Four New Words for Love by Michael Cannon
The Reluctant First Lady by Venita Ellick
The Counterfeit Crank by Edward Marston
Deadly Night: Jenni and Katie's Untold Tale: A Short Story From the As The World Dies Universe (As The World Dies Untold Tales Book 4) by Rhiannon Frater
A Bookie's Odds by Ursula Renee
Burning for the Fireman by J. L. Taft
The Fifth Child by Doris Lessing