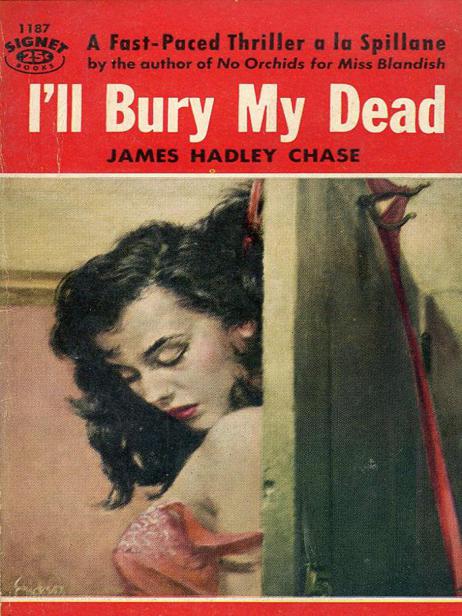 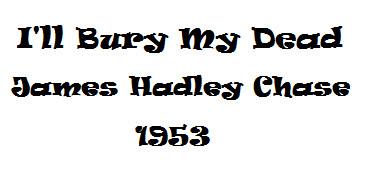 H
arry Vince came into the outer office, and hurriedly shut the door behind him, cutting off the uproar of men’s voices, each apparently trying to shout down the other, the sound of raucous laughter and the shuffling of many feet.

‘Sounds like a zoo in there, doesn’t it? And - phew! - it smells like one, too,’ he said, as he crossed the room, moving between the empty desks to where Lois Marshall sat at the telephone switchboard. He carried a bottle of champagne and two glasses which he set down carefully on a nearby desk. ‘You don’t know what you’re missing, staying out here. You couldn’t cut the atmosphere in there with a hacksaw.’ He mopped his face with his handkerchief. ‘Mr. English says you are to have some champagne. So here it is.’

‘I don’t think I want any, thank you,’ Lois said, smiling at him. She was a trim, good-looking girl around twenty-six or seven, dark, with severe eyebrows, steady brown eyes and the minimum of makeup. ‘I’m not mad about the stuff, are you?’

‘Only when someone else pays for it,’ Vince returned as he expertly broke the wire cage and thumbed over the cork. ‘Besides, this is an occasion. We don’t win the Light Heavyweight Championship every day of the week.’ The cork sailed across the room with a resounding pop! and he hurriedly tipped the foaming wine into a glass.

‘Thank goodness we don’t,’ Lois said. ‘How long do you think they’re going to stay in there?’

‘Until they get chucked out. They haven’t finished the whiskey yet.’ He handed her the glass. ‘Here’s to Joe Ruthlin, the new Champ. May he continue to flatten them as he did tonight.’

He poured champagne into the second glass.

They drank, and Vince grimaced.

‘Maybe you’re right. Give me a straight Scotch any day. He put down his glass. Why didn’t you let Trixie look after the board? It’s her job.’

‘Think of the company she would have to mix in. They know better than to bother me, but Trixie. . .’

‘Trixie would have loved it. She likes a guy to pat her fanny occasionally. She thinks it proves she’s desirable. Anyway, those apes in there are more or less harmless. Trixie would have taken care of herself if you had given her the chance.’

‘Maybe, but she’s still a kid. Sitting around in an office until long past midnight isn’t the sort of life she should live.’

‘You talk like a grandmother,’ Vince said, grinning. ‘If anyone has to stay late, it’s always you.’

‘Do we have to talk nonsense, Harry?’

Recognizing the danger signals, Vince said, ‘You were with Mr. English when he started this caper, weren’t you?’

‘Yes. We had only one small office, the typewriter was on hire and the furniture, what there was of it, wasn’t paid for. Now we have this place – thirteen offices and a staff of forty. Good going in five years, isn’t it?’

‘I guess so.’ Vince lit a cigarette. ‘He has the magic touch all right. It doesn’t seem to matter what he takes on. He has to make a success of it. Fight promotion this week, a circus last week, a musical show the week before that. What’s he going to do next?’

‘He’ll find something.’ She looked up at Vince, seeing a square-shouldered man of medium height, around thirty-three, with a crew haircut, pale brown eyes that looked worried and uneasy, a good mouth and chin and a straight narrow nose. ‘You’ve done pretty well for yourself, too, Harry.’

‘Thanks to Mr. English. I’m not kidding myself. If he hadn’t given me the chance, I would have been still sweating my guts out as an accountant with no prospects. You know, sometimes, I just can’t believe I’m his general manager. I can’t make out why the devil he ever gave me the job.’

‘He has a good eye for talent,’ Lois said. ‘He didn’t give you the job because he liked the way you wear your clothes, Harry. You earn your money.’

‘I guess I do,’ Vince said, running his fingers through his close-cut hair. ‘Look at the awful hours we keep.’ He glanced at his wristwatch. Eleven—fifteen. ‘This shindig’s going on until two o clock at least.’ He finished his champagne, waved the bottle at Lois. ‘Have some more?’

‘No, thank you. Does he seem to be enjoying himself?’

‘You know what he’s like. He’s been standing around all evening watching the other guys drink. Every so often he puts in a word here and there. He acts like he has just dropped in on somebody else’s party. Abe Mendelssohn has been trying to corner him for the past hour, but he’s having no luck.’

‘He wants Mr. English to finance his women wrestlers.’

‘That’s not a bad idea,’ Vince said. ‘I’ve seen some of those babes wrestle. I wouldn’t mind getting a job as their trainer. I’d like to have the chance of showing them a few holds.’

‘Better talk to Mr. English. He might give you the job.’

Lois pushed in a plug and picked up the harness she had laid on the desk.

She listened while Vince watched her. He saw one of her dark eyebrows lift in surprise.

‘I’ll ask him to speak to you, Lieutenant,’ she said, and laid down the harness. ‘Harry, would you tell Mr. English Lieutenant Morilli of the Homicide Bureau is calling? He wants a personal word.’

‘These coppers!’ Vince said, grimacing. ‘Wants some favour, I’ll bet. A couple of fight dockets or free seats for a show. You don’t want me to disturb Mr. English to talk to that chiseller, do you?’

She nodded, her eyes serious.

He gave her a quick look, then slid off the desk.

He went across the big room and pushed open the door that led into Nick English’s private office. The uproar of voices surged past him as he went in.

At the other end of the line Morilli grunted.

‘Better get his car to the door Miss Marshall,’ he said. ‘When he hears what I’ve got to tell him he’ll want some fast action.’

Lois thanked him, plugged in another line and told the garage attendant who answered to have Mr. English’s car at the front entrance right away. As she pulled out the plug, Nick English came out of his office, followed by Vince.

English was six foot three in his socks, and broad, giving the appearance of massiveness without fat. He was on the right side of forty, and his hair was jet—black, cut short and inclined to curl. There were white streaks on each side of his temples that helped to soften an otherwise hard and relentless face. He had a high broad forehead, a short blunt nose, a thin mouth and a square dimpled chin. His eyes were wide set, pale blue and piercing. He was arresting to look at without being handsome, and gave an immediate impression of granite-hard strength.

Lois moved away from the switchboard, indicating a telephone on a nearby desk.

‘Lieutenant Morilli is on that line, Mr. English.’

‘What’s on your mind, Lieutenant?’

Lois moved quickly over to Vince.

‘Better get Chuck out here, Harry. I think he’ll be needed.’

Vince nodded and went into the inner office.

Lois heard English say, ‘When did it happen?’

She looked anxiously at the big man as he leaned over the desk, frowning into space, his long fingers tapping on the blotter. She had known Nick English now for five years. She had first met him after he had thrown up an engineering job in South America and had opened a small office in Chicago to promote a gyroscope compass he had invented to be used in petroleum drilling operations. He had engaged her to run the office while he had walked the streets in search of the necessary capital to manufacture the compass.

There had been difficulties, but she had quickly learned that difficulties and disappointments only made English work harder. She discovered he had an undefeatable spirit. There had been times when she had gone without salary and he had gone without food. His optimism and determination had been infectious. She knew he must succeed. No one who worked as hard as he did could fail to succeed. But it had been a year of no rewards and constant setbacks and had forged a link between them that she had never forgotten, but at times, she wondered if he had forgotten. Finally the compass had been financed and had proved a success. English had sold his invention for two hundred thousand dollars plus a royalty on future sales that still brought him in a comfortable income.

He had then looked around for other inventions to promote, and during the next three years he built up a reputation for himself as a man who could get money out of a stone. With his newly acquired capital, he broadened his scope, and went into the entertainment business, promoting small shows and nightclub cabarets, and then branching out to bigger and more ambitious shows.

Money began to pour in, and he formed companies. More money poured in and he took over the lease of two theatres and a dozen nightclubs. Later, when money became almost an embarrassment, he moved into the political field. It was his money that put Senator Henry Beaumont into power and was keeping him in office.

Looking at English now, Lois realized just how far he had come and what a power he had become, though she regretted his rise to a height where she could no longer be of real use to him, when she was just one of many who served him.

Vince came out of the inner office with Chuck Eagan, who drove English’s car and did any job that English wanted done without argument or question. He was a small, jockey-sized man in his late thirties. He had sandy coloured hair, a red, freckled face, stony eyes and quick, smooth movements. He was looking at his worst at the moment: a tuxedo didn’t suit him.

‘What’s cooking?’ he asked out of the side of his mouth, edging up to Lois. ‘I was enjoying myself.’

She shook her head at him.

English said into the telephone mouthpiece: ‘I’ll be right over. Leave things as they are until I get there. I’ll be less than ten minutes.’

‘The car?’ he asked, looking at Lois.

English hung up. As he turned the three stiffened slightly, their eyes on his, waiting for instructions. His solid suntanned face told them nothing, but his blue eyes were hard as he said, ‘Get the car, Chuck. I want to be away at once.’

Por sendas estrelladas by Fredric Brown
Breaking Stalin's Nose by Eugene Yelchin
McKenzie’s Branson Brainteaser by Shari Barr
Escorting The Billionaire #2 (The Escort Collection) by Leigh James
DC03 - Though Mountains Fall by Dale Cramer
What You Do to Me (A Breathe Epilogue) by Sloan Parker
Captain Future 25 - Moon of the Unforgotten (January 1951) by Edmond Hamilton
InstructionbySeduction by Jessica Shin
The Riddle of Penncroft Farm by Dorothea Jensen
Dead Men's Tales (Tales of the Brass Griffin Book 5) by C. B. Ash