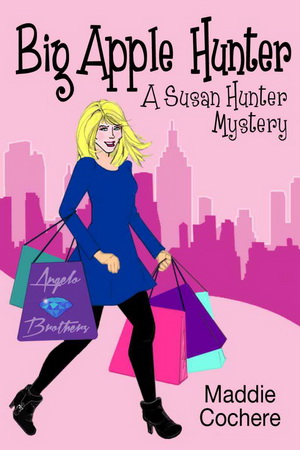 All rights reserved, which includes the right to reproduce this book or portions therof in any form whatsoever except as provided by US copyright Law.

This ebook is licensed for your personal enjoyment only. This ebook may not be re-sold or given away to other people. If you would like to share this book with another person, please purchase an additional copy for each recipient. If you’re reading this book and did not purchase it, or it was not purchased for your use only, then please return to Amazon.com and purchase a copy for yourself. Thank you for respecting the hard work of this author.

This is a work of fiction. Names, characters, places, and incidents are either the product of the author’s imagination or are used factiously. Any resemblance to actual events, locales, organizations, or persons living or dead, is entirely coincidental and beyond the intent of either the author or the publisher.

Angela, an attractive 25-year-old brunette with
a
short,
bob haircut
, was my assistant manager at Slimmers Weight Loss. She had just stuck her head through the doorway of our small conference room and delivered the unpleasant news to me.

My presentation to two potential members, Courtney, a plump 19-year-old waitress from the diner in downtown Carbide City, and Janet, a curvy
,
33-year-old
,
stay-at-home mom, was going to have to wait.

A bri
ef look at Courtney showed
she was staring at Angela with her mouth h
anging open. Janet
put her head down and
fidgeted
in her seat with discomfort. “Ladies,” I addressed them, “please excuse me. I'll be right back.”

I rushed to the small bathroom and saw Mrs. Colter standing beside the sink
staring at
a puddle on the floor. My eyes widened. “Mrs. Colter, we talked about this before
,” I said sharply. “
Are you still peeing on keto sticks? Yo
u know we don't do that anymore.
” I raised my voice higher, “and how does it get on the floor?”

“Oh, Susan, I'm so sorry,” said the gray-hai
red woman as she stood
clutching her purse to her chest. She looked miserable, and seemed genuinely sorry
.
“I manage just fine at home. I don't know why it gets away from me here.”

“
I'm sorry, too,” I told her shaking my head in frustration. “I'll get
a
mop
and clean this up, but if it happens again, you'll be doing the cleaning. And please throw those doggone sticks away!”

I had to restrain myself from swearing at the 6
4
-year-old woman. I took a deep breath, softened my tone
, and said. “Mrs. Colter, if you
follow the program, and let us help you, you'll keep losing weight. You don’t need to do anything else. Take a seat in the waiting room, and I’ll have Angela go over your food diary with you.”

I
made a nice salary
managing the center, but some
days it didn't feel
worth it. A quick peek in
to the waiting room showed
two of the ladies waiting for possible enrollment had already slipped out. Grace was coming through the door to help me and Angela, and three more
women
interested in enrolling were right behind her.

An advertising campaign was being waged for two weeks to drive members to Slimmers
Weight Loss
centers, and we were slammed this morning. When
I
arrived at 10:00, twelve women were waiting either for weigh-in consultations or for information about enrolling in the program.

Slimmers was a large national chain of weight loss centers. Our center was in an office building near the shopping mall on the east side of Carbide City. The layout was narrow with three sections. The waiting room was at the front of the center, the next section was the weigh-in area and a small bathroom
;
beyond that was a short hallway leading to the conference room and my office.

The center was decorated modestly with light blue and mauve throughout. Pink accents added a touch of brightness making the entire center warm and inviting. There were plans at the corporate level to make major changes after the first of the year. Centers would be remodeled, there would be more food choices, and a men's program would be integrated; but for now, it was still women only. Our dress code was business casual, and today I was wearing a hunter green pencil skirt with a white silk Henley shirt. I hated the thought of cleaning the bathroom in the white silk and approached the detail cautiously.

When finished, I re-entered the conference room and sat down facing the two women once again. I
directed warm smiles to Courtney and Janet
and said, “Ladies, I’m
sorry for the interruption. Our advertising has been a huge success, and we’re much busier than usual today.”

“W
e didn’t mind waiting,” said Janet sweetly. “Courtney and I have been talking, and she’s going to do some babysitting for me this weekend.” Courtney smiled, and the two ladies
appeared to be best friends now
. That was always a good sign.

She blushed
and said,
“I'm embarrassed to admit
I've put on 25 pounds since I start
ed working at the diner. I
need
help to figure out how to work there, and eat there, and not gain weight. I take food home with me, too, so it's diner food all day long.
And the biggest problem is,
I love it. I just love me some mashed potatoes and meat loaf.”

“Oh, I do, too,” chimed in Janet with her eyes lit up and shining. “I've been to the diner many times, and the meatloaf there is the best. Ooh
,
and your lemon meringue pie is to die for.”

Courtney perked up even more. “Thank you!” she said excitedly. “I make the pies myself. I go in early before we open and make all of the pies for the diner. The lemon meringue is my mother’s recipe, and it’s my favorite.” She looked sheepishly at me and confessed, “I taste a lot of the fillings in the mornings, and sometim
es I squirt whipped cream
into my mouth
right
out of the can. Maybe I should get some help with that, too.”

The two women were practically
drooling.
I needed to reel them back to topic. I turned to Janet and
asked
, “Janet, what made you want to come in today?”

“Well,” she hesitated,
glanced at Courtney
, and then plunged ahead, “I want to lose weight, but I'm not really sure if I should.”

“Why would you think
you shouldn't lose weight?” I asked her. It was such an odd thing to say.

She looked a little flushed and said, “I get too hot when I lose weight.”

I wasn't sure what she meant. “Too hot?” I questioned.

“When I lose weight and feel better about myself, I feel sexier,” she said as she started to fidget in her chair.

“Well, not really
,
”
she said.
She looked at Courtney again and then somewhat whispered her answer, “I get too hot. I want sex all the time, and it drives my husband crazy. He wouldn't like it if he knew I was here.”

I was stunned. My training manual didn't cover how to overcome that objection to enrolling in the program. Courtney'
s mouth was hanging open again.
I clenched my jaw at her, and she clamped hers shut.

Just as I was beginning to fumble for some words, Angela stuck her head through the doorway again with another look of panic on her face. I'm usually mildly irritated when Angela brings up center business in front of
potential members
, but this time I was grateful for the interruption. “What is it, Angela?” I asked her.

She was nearly in tears when
she replied, “Mrs. Colter
had a hot flash and stripped down to her underwear in the waiting room.”

The two women giggled. I hung my head in defeat.

I didn't leave the center until closing at 7:00 P.M. By the time it was all over, Courtney
had
decided to go back to the diner where, according to her, it wasn't so hectic, and Janet freaked out about being too hot and sexy again and bolted with Courtney. But we signed eight new people throughout the day with four more wanting to think about it and possibly coming back later. We also weighed, measured, counseled good eating habits, and sold food products to 46 regular
members. After
a rocky start, the day ended up being very successful
.

I was scheduled to work at the racquetball club, Carbide Racquet & Fitness, from 9:00 until midnight, so I left the center right at closing with the intention of coming in an hour early in the morning to catch up on paperwork.

I slipped behind the wheel of my bolero red
'67 Chevy Chevelle that I
loved. It had been beautifully restored by my dad, and he had given it to me as a gift for my 27th birthday when he and my mom moved to Texas over a year ago. I pushed in the 8-track tape and was greeted with
Daydream Believer
by the Monkees. I always
thought it was such a hoot
Dad had scoured flea markets to buy old 8-track tapes with music from 1967 to
match the year of the
car. There were at least a dozen tapes in the car's console.

I decided to swing by Martin's Deli
to pick up a
few things before heading for home. Martin was
in his nineties
and still ran the deli himself. He and my dad had known each other since my dad was a teenager
,
and they still stayed in touch at least once a month. Martin kept Dad up-to-date with all of the town gossip.

I
stepped
through the door
way
, and before I could even say hello, Martin gave me a stern look of disapproval and said, “Susan
Hunter
, I
can’t fathom
what's gotten into you lately. It's getting harder and harder to talk to your
father
and not tell him how that dad-blamed car
has changed you, and how you’re
ruining your life.”

“Martin,” I said smiling and shaking my head, “I have no idea what you're talking about.” I hadn't had a spee
ding ticket in over six months, and I couldn’t imagine what blame he
was placing on the car now.