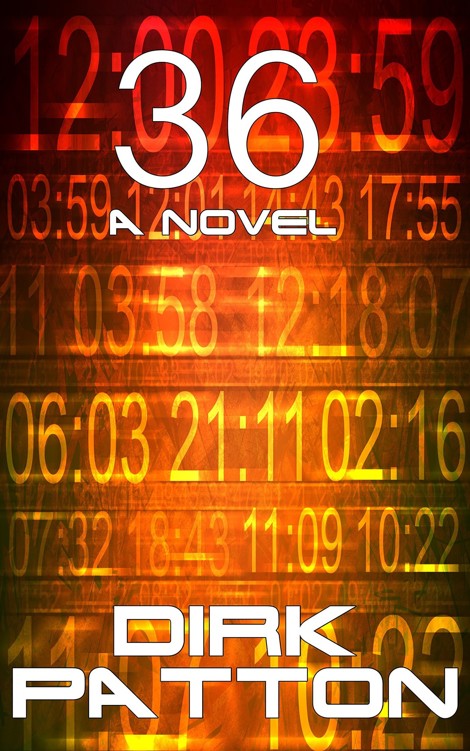 This book, or any portion thereof, may not be reproduced or used in any manner whatsoever without the express written permission of the copyright holder or publisher, except for the use of brief quotations in a critical book review.

This is a work of fiction. Names, characters, businesses, brands, places, events and incidents are either the products of the author’s imagination or used in a fictitious manner. Any resemblance to actual persons, living or dead, or actual events is purely coincidental.

Other Titles by Dirk Patton:

Thank you for purchasing 36.

I know, you’re probably thinking “Oh crap, not another time travel book”.  Can’t say that I blame you.  That’s why I hope you’ll find that what I’ve created is something a little different and unique.  Is there time travel?  Yes, there is.  But I believe I have achieved a good balance where the reader’s enjoyment of the story isn’t dependent upon their ignoring the theories posited by Einstein that prove movement through time is impossible.

At its heart, 36 is the story of a lost soul who is miraculously given a second chance at life.  He’s not a bad man, but he’s made some bad choices and very nearly paid the ultimate price.  Now, he gets to start over.  Just like most of us wish we could at some point in our lives.

So sit back, tighten your seatbelt, and enjoy the ride.

You can always correspond with me via email at
[email protected]
and find me on the internet at
www.dirkpatton.com
and follow me on Twitter @DirkPatton and if you’re on Facebook, please like my page at
www.facebook.com/FearThePlague
.

Trevor Solverson sat watching the massive white and green ferry slowly approaching Pier 52 on Seattle’s waterfront.  The sun was shining brightly, gleaming off the boat’s bridge windows.  It was another glorious, summer day in the Pacific Northwest, the waters of Puget Sound almost impossibly blue under the clear sky.

All around, cars and trucks were lined up, waiting to board the ferry which would transport them across the open waters of the Sound to Bainbridge Island.  It was a short trip, taking no more than 35 minutes from dock to dock, and was one of the busiest routes served by the Washington State Ferry System.

Trevor lit a cigarette with nervous hands, his stomach threatening to rebel.  He was only 17 years old and this would be the first time he had ever driven a vehicle onto one of the massive ferry boats.  For that matter, it was the first time he had driven beyond the confines of his well-heeled, suburban neighborhood other than a few practice runs with the truck.  Navigating the maze of freeways and surface streets had been nerve wracking for the young driver.  Doing it in choking traffic had nearly caused him to abandon his quest.

But he had persevered.  Pushed on.  Reminded himself that he was doing God’s work.  That thought had given him the strength to calm his racing heart and keep pushing the large GMC truck to the docks.  Now he sat, waiting as vehicles began streaming off, sweating as he puffed on the cigarette.

He jumped when his cell phone rang.  Snatching it out of a cup holder between the seats, he sent the call to voice mail after checking the caller ID.  His mother.  Checking the time, he realized why she was calling.

Trevor was on probation with the King County Juvenile Court, and she had probably tried calling him on their home phone.  He wasn’t supposed to be anywhere other than at his residence.  No school.  He’d been expelled after what his father had taken to calling “the incident”.

He hated that term.  Somehow it trivialized not only what he’d done, but everything he believed.  It made light of not only him, but the global cause in which he’d gladly become a soldier.  A holy warrior.

Four months ago, half way through his Junior year of high school, Trevor had slipped out of the house late one night.  Sneaking through his quiet neighborhood, he had arrived at his school in the early morning hours.  Getting in had been simple.  A window in one of the classrooms had broken easily and he was able to reach through and unlock it.

But, he was only 17 and knew he could still commit many crimes that would never go beyond the authority of the juvenile court system.  Short of a violent felony, he was confident he’d get nothing more than a slap on the wrist and could look forward to his record being sealed when he turned 18.

So he’d moved through the dark hallways, heading for the large vestibule where visitors first entered the school.  There, in a glass display case, was a well worn, leather bound bible.  It had belonged to Luke McRedmond, the founder of the small city of Redmond in which Trevor lived.  The bible, and several other historical artifacts, were on loan to the School District from the Historical Society as part of an effort to foster interest in local history among the younger generations.

The presence of the bible, and several writings that prominently featured bible verses, were offensive to Trevor.  He had been raised in a Catholic home, but his parents were far from devout Christians.  Mass on Easter and Christmas Eve had been enough for them, and as he had grown into his teens, Trevor had begun looking for something more than what his parents professed to believe.

Like most middle and high school aged children, he’d turned to the internet.  Surfed the plethora of web sites devoted to different religious beliefs around the world.  For a time, he had identified with Shinto, then quickly moved on to Buddhism.  But neither sparked his interest the way Judaism did.

For several months he devoured everything he could find about the history of the Jewish race and faith.  Accounts of the holocaust fascinated him, and as he learned about the formation and struggles of the nation of Israel, he decided he wanted to emigrate and become a Jew.

It was during his searches for information on how to do this that he began to encounter sites and chat rooms where the visitors were calling for the destruction of Israel and the annihilation of all the Jews.  At first he was horrified and incensed, but for some inexplicable reason he kept reading.

Reading eventually became posting questions.  He didn’t understand the hate filled speech being directed at such a small population.  Many of the posters responded vehemently, calling him a Jew lover or an infidel.  He was taken aback at the level of animosity directed at him for simply asking questions.

There was one man who responded articulately and with extreme courtesy.  They began talking each night.  Trevor’s new online friend patiently explained the plight of the Palestinian people at the hands of Israel.  He had slowly and meticulously drawn the impressionable teen into his dialogue before carefully branching out into examples of how the United States and its Western Allies were keeping their boot firmly on the throat of the Arab world.  Within a month they were having deep discussions about Allah and his prophet Mohammed.

Trevor withdrew from his friends and family as he learned the “truth” of what Christianity and Judaism were really all about.  He soon came to believe that all of the death and despair in the world that he saw on the internet was coming directly from US foreign policy.  A policy intended to hold down any non-Judeo-Christian nation.

Two months after meeting Abdul in the chat room, the man suggested they move their conversations to a more secure forum.  Trevor had a Play Station and happily began using it to communicate.  They would both login to an online game at the same time each evening, speaking directly over headsets connected to the gaming consoles.

Trevor was surprised the first time he’d spoken to Abdul.  With nothing more than movies and caricatures to draw on, he’d expected a voice with a thick, Middle Eastern accent.  The last thing he’d been prepared for was a man with a quiet, cultured tone who spoke with a slight English accent.

They talked for hours at a time, Abdul telling him about the struggle against the Great Satan.  Trevor reveled in the stories, feeling envious of the soldiers fighting and dying in the global jihad.  Soon, with Abdul’s instructions, he was praying multiple times a day, prostrating himself before Allah as he faced Mecca.

Desperate to belong to a cause, any cause, and wanting to impress his new friend, Trevor had decided to take action when the McRedmond bible went on display at his school.  If he had told Abdul what his plans were ahead of time he would have been talked down, but he had wanted it to be a surprise.

As he entered the vestibule he’d noted with disgust that a small spotlight was on, illuminating the bible in its display case.  Prepared for the moment, he’d brought along a hammer, a homemade stencil and a can of fluorescent red spray paint.  Smashing the glass, he put the cardboard cutout in place and carefully began working.  He sprayed the words “Allahu Akbar”, first on the cracked leather binding, then on dozens of the internal pages of the antique book.

Finished, he looked around and smiled when he saw the large American flag standing in the corner.  Pulling it down, he spread it across the floor.  Using the stencil again, he defaced it with the same words across the white stars on the blue field.  He was standing over his work, mumbling a Muslim prayer under his breath when a brilliant flashlight spotlighted him.  He hadn’t known the school had an alarm system.

Several court appearances later, and the calling in of multiple favors by his father, Trevor was placed on supervised probation until his 18
th
birthday.  He’d been expelled from school and his parents had taken away his computer and Play Station.  Most 17 year olds would have been lost without the conveniences of modern technology, but he had retreated into his newly acquired faith.

With approval from his parents and his probation officer, Trevor had enrolled in an online high school.  While they thought he was showing promise, he had no intention of wasting another moment on his education.  He just wanted to regain access to the internet so he could talk to his friend.

Shaken Up by Alex Morgan
Rise of the Phoenix (The Phoenix Trilogy Book 1) by M.R. Ferguson
First Contact by Walter Knight
Dig by Corwin, C.R.
The Prom Goer's Interstellar Excursion by Chris McCoy
Snatched by Unknown
Galactic Battle by Zac Harrison
Seduction by Violetta Rand
Living with the Dead by Kelley Armstrong
Waylaid by Ed Lin