A Room on Lorelei Street 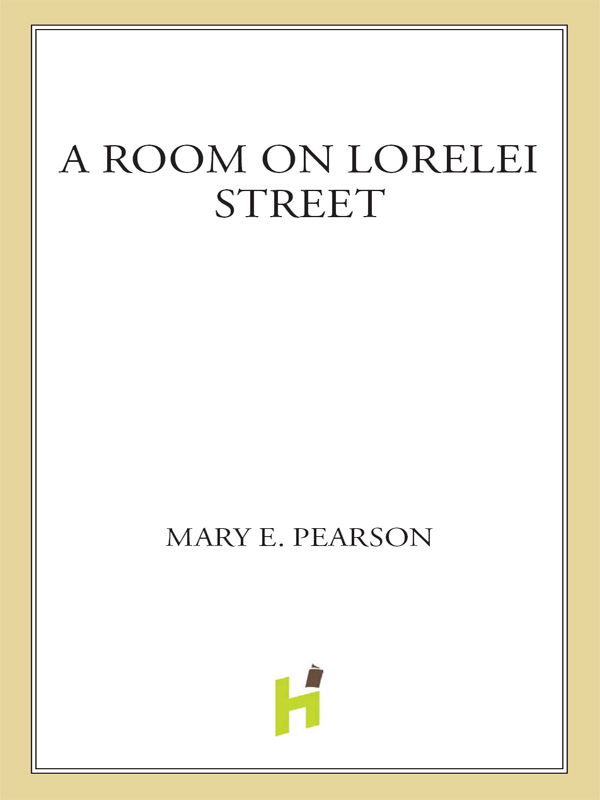 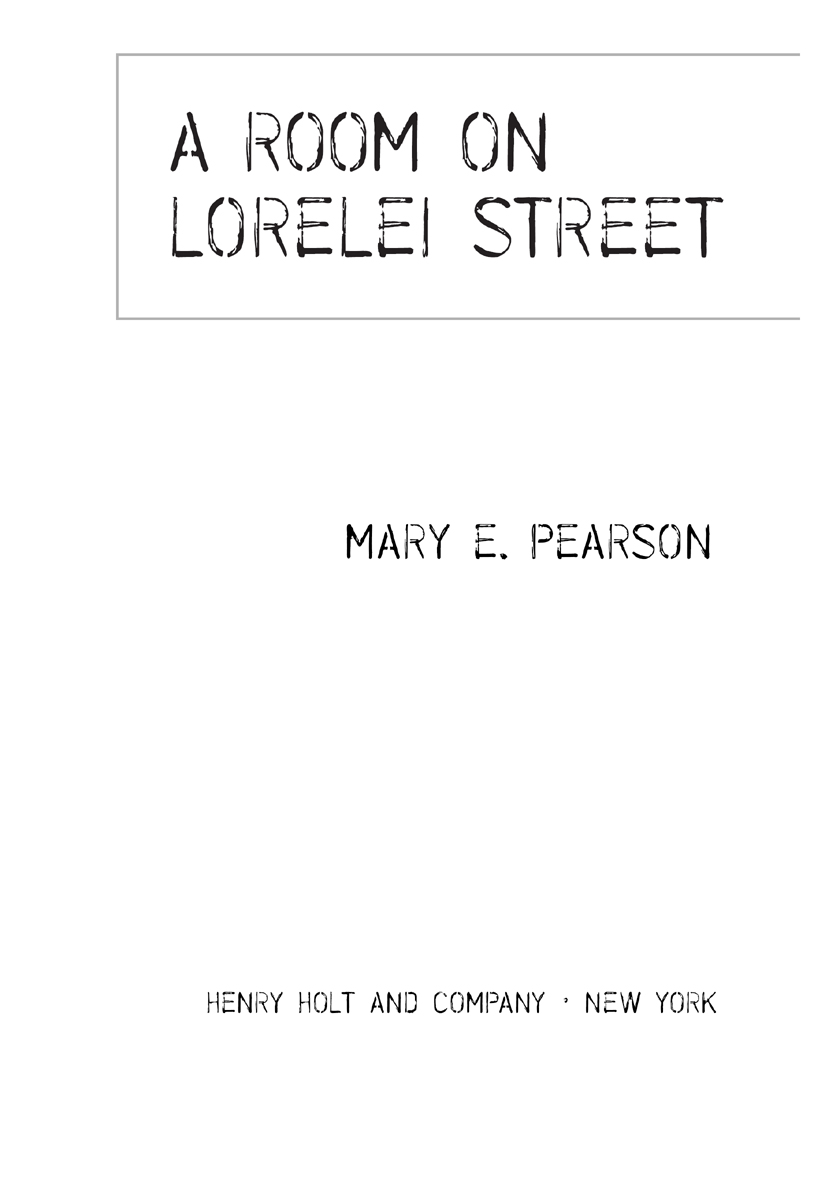 So many thanksâ¦
to Amanda Jenkins, Catherine Atkins, Gail Giles, Nancy Werlin, Shirley Harazin, and Laura Wiess, for being so generous with their time, insights, advice, and encouragement; and to Jill Rubalcaba for pushing me to begin and then being there from start to finish. Her expertise, support, and creative nagging got me through.

My gratitude to Rosemary Stimola for finding me the perfect match. And deepest thanks to Kate Farrell, for her gentle guidance and for loving Zoe as much as I do.

And always, my everything to Dennis. He makes it all happen.

“â¦but you excel them all.”

For Helen and Dorothy,
with my love and thanks

It used to be a house.

You could almost have called it pretty.

She stares at chain-link threaded with weeds, a few of them blooming. Her vision blurs on white petals and regains focus on a patch of lawn the fence holds inâor what might have been a lawn once. She can't remember that it has ever been green but knows it once was more than the dusty stubble it is now. She thinks about the rough texture between her toes, running across it, barefoot, with the hot Texas sun pressing down from above and a cool, lazy sprinkler refreshing from below. She remembers a six-year-old girl whose laughter came easy. She remembers but wonders, Was it ever really that way?

No pretense is made of throwing out a sprinkler now. It is not a house anymore. She knows that. The only life is in the weeds that live in the protection of the chain-link.

She throws down her cigarette and mashes it on the sidewalk, kicking it over with a pile of a dozen others. She breathes out one last, smoke-filled breath and almost smiles. There is still a little pretense left. She slips a peppermint into her mouth and lifts the latch of the gate. It groans, low and heavy, whispering,
Don't go in. Don't go in.

The front room is heavy with the smell of dusty furniture and stale cigarettes. She walks to the kitchen and sees a plate of eggs and buttered toast, untouched, still sitting at the kitchen table where she left it this morning. She shoves aside dishes, unopened mail, and brimming ashtrays, and sets her books on the counter.

There is no answer.

The floor beneath her creaks as she walks down the short hallway. The first door is open, the room dark. Her hand slides around the wall and flips on the light. The room is empty, but she yanks back the shower curtain just to be sure.

She has to be sure.

The bathtub is empty, the glimmering white a macabre gift, and a faint, strangled noise escapes through her throat as she turns off the light and continues down the hall. The door opposite her own is closed, but she turns the knob and slivers it open, just enough to see bare legs across rumpled sheets and a never-made bed. Heavy breathing, the sound of deep slumber, drifts out of the room along with the smell of hair spray, oily linen, and anisette. She closes the door, shutting in the smells and sounds, and steps across the hall to her own room. The air is hot and still.

She hits the switch on her fan to high and scans the room.
What should I take? What?
She grabs a duffel bag from beneath her bed and begins to fill it. Jeans, underwear, T-shirts, pajamas, the blanket from her bed? There isn't room for it all. She empties the bag and starts over, trying to decide what must go. When the duffel is full, her pillowcase is stuffed with more. Her ragged Eeyore, headphones, a framed picture of her and Kyle, her broken jewelry box with the plastic ballerina. She steps back and stares at the duffel bag and bulging pillowcase lying on her bed. Full and waiting. Stares at them for four minutes, imagining them resting on a different bedâa bed in a room, down a hall, in a house, on a street named Lorelei.

A pretty name. What does it mean? Maybe a flower. Maybe a sparkling, rushing river in a faraway part of the world. She whispers it aloud, “Lorelei.” The sound makes her ache, makes the word even more beautiful, even more real. Her eyes close, and her hands inch up to hug her arms. The only sound is the whirring and chink of the fan as it oscillates back and forth.
Lorelei.
The fan whirs and whispers again and again,
Lorelei, Lorelei, Lorelei
.

Her eyelids flutter open. This is not Lorelei Street. She unzips the duffel. Piece by piece, everything is put back exactly where it had been. The same with the pillowcase, until it only holds a limp, beaten-down pillow. Her eyes lock onto the deflated case for another silent minute and then she goes to the kitchen to wash dishes and throw forgotten eggs down the disposal.

The dishwasher is brokenâit has been for monthsâso she fills the sink with hot water and squirts in dish soap. Soft bubbly water rises, enveloping cereal-crusted bowls, coffee cups with smeared lines of lipstick, and glasses with burgundy-colored stains. They are swallowed by the white bubbles, erasing three more days and promising a fresh start.
A fresh start.
Again, she almost smiles and dips her fingers into the hot water searching for the sponge.

She turns and sees Mama leaning against the doorway, still rubbing sleep from her eyes. Mama is pretty, striking, even as she is now. She looks at Mama's legs, each day growing thinner, taut, the knees protruding like bony knobs while her trunk bloats like a barrel. Her eyes are puffy, her shimmering white-blond hair, brittle. But still, Mama is beautiful, delicate and light like a fragile china doll.

“I thought you were going to work today, Mama,” she says, turning back to the sink, searching for the sponge hidden beneath the bubbles. She finds it and vigorously scrubs the first glass.

“I called and there weren't any appointments for me.”

There haven't been appointments in weeks. No one wants Mama anymore. Her hands shake, and Mama talks about things no one wants to hear. The glass is clean, but she continues to scrub. “There's always walk-ins. Sally always has walk-ins for you.”

“I just wasn't up to it. Not feeling too well. Iâ”

“You didn't eat the eggs I made you. You said you would. Before I left for school you saidâ”

Mama leaves. She walks from the kitchen to the front room, brushes week-old newspapers from the couch to the floor, and lies down. “Come on in here, sugar. I'll get those dishes later. Come sit with me and talk.”

Talk. She rinses the glass and feels her stomach squeeze. There will be no
talk
. Only listening. And listening.

She dries the glass swirling the towel over and over, around and around, till it squeaks, pleading for a breath, and then she dries it again. “I can't,” she whispers, so lightly the sound is lost behind the humming refrigerator and the squeaking of the dry glass.

She stops drying and slips the glass back into the soapy bubbles. “Coming, Mama.”

Mama talks, and she listens. There is no explosion, no suffocating, no dyingâjust listening and listening to stories and retellings she has memorized. She adds a word here and there, because Mama needs her to.

She glances at her watch. Her shift at the diner starts in an hour.

Mama finally remembers. “Oh. Today was your first day. How did it go?”

She looks at Mama's hand curled around her own. It is warm and soft. “I got the classes I wanted. Not all the teachers, but I did get the classes. Sixth-period P.E., too, so I can go straight to tennis.”

“After school, Mama. I'm on the team. I already told you.” She's been on the team for two years. Mama has never seen her play.

“Oh, that's right. I forgot.” Mama begins to drift, her eyes half closed.

There is more about her day that Mama should know. Should she tell? A smile plays behind her eyes, comes nowhere near her mouthâthe pretense is there againâMama still signs the notes, is still on the parent information card at school.

“There is one other thing. You might be getting a phone callâfrom the principal.”

She sees the clarity she yearns for.

“It was a cussword, Mama. Just one little cussword that slipped out before I knew it. It didn't mean anything.”

“Is that all? One little word? Don't worry. I'll talk to the principal. He'll forget all about it.” Mama rolls to her side and closes her eyes.

She thinks about fifth period. American Lit. The principal won't forget. She tries to remember exactly how it happened. Was it the afternoon sun? The rising temperature and overcrowded classroom? Going without a cigarette all day? Or was it the way Mrs. Garrett looked too much like Grandma when she tilted her head? Too much like Grandma when she looked down her nose over half glasses while calling roll but never once bothering to look into a single face in the classroom? Or maybe it was the muffled laughter that rolled through the room when Mrs. Garrett called her nameâ¦.

A sprinkling of laughter. And then, like it amuses her, like an encore performance, Mrs. Garrett calls again. Slowly this time, louder, so she owns the name. “Zo?”

It isn't exactly a snap. More like a simmer with steadily increasing heat.

And then the simmer grows hotter and she stands.

A nervous, hushed titter runs through the classroom.

“Zoâeeeee,” she says again, to be sure she is clear. She has to be clear. “Got it?” she finally asks.

“Ohâ¦
yes,
” Mrs. Garrett says, setting aside the roll sheet and looking over her glasses in a classroom where there is no air to breathe. “I got it.”

She steps closer, her feet pushing her to the front of the classroom like in a dream.

Zoe stands, releasing Mama's limp hand, and thinks it probably wasn't the heat or the cigarettes or the overcrowded classroom at all.
Zoe,
she thinks, and then says it aloud to make it more real. “Zoe.” But the breathless little word is lost in a room of dust and clutter, because Mama is asleep, and there is no one else to hear.

Smallbone Deceased by Michael Gilbert
Quantum Night by Robert J. Sawyer
Obstruction of Justice by Perri O'Shaughnessy
Love of the Dragon (Her Dragon's Bane 4) by Harmony Raines
Lacy Williams by Roping the Wrangler
The Queen of Patpong by Timothy Hallinan
Lone Rider by B.J. Daniels
Ambush by Sigmund Brouwer
'Til Death - Part 2 by Bella Jewel
The Chaplain's Daughter by Hastings, K.T.