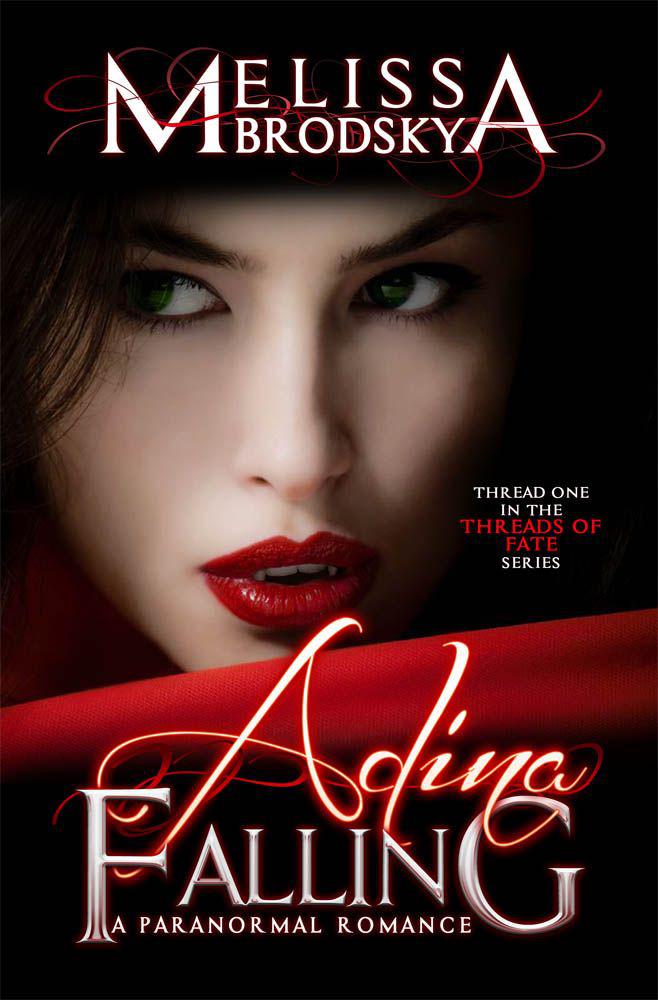 Adina Falling
Copyright © 2013 by Melissa Brodsky
Cover by R.A. Mizer of ShoutLines Design
This book may not be reproduced, scanned, or distributed in any printed or electronic form without permission from the author. Please do not participate in or encourage piracy of copyrighted materials in violation of the author's rights.
All characters and storylines are the property of the author and your support and respect is appreciated. The characters and events portrayed in this book are fictitious. Any similarity to real persons, living or dead, is coincidental and not intended by the author.
All rights reserved.

First and foremost, I would like to thank all my Beta Readers who helped make this story flow in the right direction. Nadine Collings, Amber Snyder, Jenny Small, Gemma Aspinall and Sean Cleary. I know I forgot some names but that doesn’t make you any less important in this process. THANK YOU.

I’d like to also thank Rachel Mizer of Shoutlines Designs for creating the incredible cover.

I first created Adina, the main character of the story when I was flying home from LA after being on the Dr. Phil show. It was 2009 when Adina came into my life. I had been trying, for all these years, to figure out how to finish her story, the original part being the prologue of this novella. And one September morning, when the kids had gone back to school after a long summer vacation, it happened. Her life finally revealed itself to me. All I had to do was type. It poured out onto the screen and the Threads of Fate series was created.

Thank you for reading,

To my husband, Eric,

who encouraged me to take Adina and run with her.

I slid into a rock star parking space in the heavily crowded, downtown parking structure. I smiled smugly and looked up toward the heavens and thought See God, you do gaze kindly upon vampires. Sometimes.

I opened the door, swung my very shapely legs around to get out, and put my keys into the pocket of my old yet favorite Chloe Paddington bag. My Choo-clad feet barely made contact with the pavement when I caught his strong scent. It made me shiver and gasp with delight and anticipation. I, Adina LaCroix, would find him and make him mine for the night.

His scent of anger and darkness made me hot. It was the perfect mix for the cocktail I was craving, one that would completely intoxicate me on this deliciously warm evening.

I was hungry. Ravenous. But I liked the anticipation. I got off on prolonging my satisfaction. It was foreplay for the sweet release.

The stalking was one thing I loved about being a vampire. The thrill of the hunt was an exciting finale to my mundane day. After all, for all practical purposes, I was a sort of serial killer. A predator. I took my role in the theater of life very seriously. I played my part with an award-winning performance. Well, I liked to think that I did. I considered myself to be quite the actress.

By night, I lived the life of a stereotypical vampire, I hunted for blood. Not all the time, though. Some nights, I was perfectly content to stay home and just drink from my personal stash I kept in my refrigerator. By day, it was a different story. Contrary to widespread popular belief, many vampires had evolved and were able to carry on regular, almost human-like lives. They got married, they had careers. Some of them were even able to procreate which was something I would consider in the future. Right now I felt as though I were still too young and selfish to be tied down to a husband and children. I wanted to go out and enjoy life’s experiences while I still could, before the Elders forced me to settle down.

I started walking with a confident stride, following my nose. My senses were alert and tingling. Whenever I thought of myself that way, I was reminded of Spider-man. My steps made no sound as I glided along the busy street in search of my evening plaything.

I paused in front of a large picture window, a place swarming with nightlife. Window shopping but saw nothing I really wanted. So I moved on, toward the scent that beckoned me with sweet promise.

Downtown Birmingham seemed to be the happening place tonight, full of sex, desperation and alcohol. Not a good combination for mortals but a succulent feast for vampires. I could sense that I was the only vampire in the city, at the moment. Most of my friends were hanging out in Detroit. They didn’t want to venture into the “burbs” during the week; there was not enough happening for them to make the trip. Cities, even Detroit, had more things to do and people to do it with. So, I decided to solo-it this evening.

Typically I only preyed on men while many of my kind were indiscriminate. I went after cheaters and criminals; it was the least I could do to aid society. Savory characters, in more ways than one. Men with hidden agendas and dirty secrets like the one I was stalking tonight. These were the ideal quarry.

On rare occasion, I would hook up with a woman but that mostly depended on what sort of selection there was in the masculine department. I preferred to be in the company of men but a girl has to eat and sometimes my options were a little more limited. It had been a very long while since I had been with a woman for anything more than a quick snack, and by that I meant blood only.

Walking a little further, I felt him. His presence was stronger; I knew I was getting closer. I shuddered again, anticipation rolling down my spine. I probed his mind and for a moment, I actually felt sorry for his wife. He was a prick, without a doubt. His character, or lack thereof, didn’t matter to me; I wouldn’t be with him for the long haul. I was simply going to use him to meet my needs, however long that would take.

Without realizing it, I had stopped in my tracks. I had arrived. Looking up at the awning, I recognized I was finally at my destination. Effortlessly, I pulled open the heavy door to the bar and I walked down the stairs. Propelled by the heavy masculine pheromones beckoning me, I pushed past the crowd waiting in line to get in . His aroma was taunting me, teasing me by mixing itself with flowers and spices. I felt a tugging in my sex, a desire I couldn’t wait to drown in.

Stereotyping didn’t matter to me at the moment; all I was interested in was this man. The man whose scent I had followed since I stepped out of my car. And when I was done getting off, I would do the world a favor and suck him dry, erase his memory and leave him with a thought, so deeply implanted in his mind that he will never hurt anyone again. It was my public service to the female population. The perfect climax. The cherry on top.

He was standing next to a stunning blonde, leaning closely to her, trying to seduce the woman by whispering promises in her ear. His Mediterranean heritage was as obvious as the dark aura that encompassed him, to me anyway. His teeth glowed in the black lights, strong and straight. He was gorgeous. I wanted to high-five myself; he was the perfect specimen for my evening plaything.

I wanted him. A primal drive so deep that, despite the warmth radiating from the sea of bodies that crowded the room, I suddenly shivered. I loved when this happened to me, when I found the flawless entertainment. It didn’t happen all the time, sometimes I just had to settle with second best. Not tonight, though. Tonight, the only thing that would be settled was my ravenous appetite for sex and blood.

I found myself wanting to go up to him, whip down his pants and wrap my mouth around his cock. I wanted to taste his juices. All of his delicious juices from all of his arteries. I ran my tongue along my teeth in anticipation and gazed seductively at him. I had to exercise caution though or my fangs would expose themselves. It happened when I was too hungry, turned on or both.

Eye contact was made and I caught his attention further with a little help from vampire glamour. He walked abruptly away from the blonde and sauntered casually toward me, never taking his eyes off mine. In my peripheral, I noticed the blonde sulk and walk away in search of someone else to bring home with her. She was on a hunt, too? Cocking my head to the side, I noted the girl was not human but I did not sense she was Vamp either. Fae? Oh yes, I caught a whiff of the intoxicating aroma of the Fae blood. Any other time, I might have chosen to feast on Fae over human; even if it was from the female of their species. Not tonight, however. Tonight, I wanted all male. I wanted to feel the warmth of his skin, to run my hands over his hard abs and even harder cock. I wanted to indulge in testosterone. Glancing over to the pretty blonde, our eyes met briefly. Fear radiated from the female Fae but I shook my head, signaling that for tonight she would be safe from me. She was a pretty little thing, though, I thought.