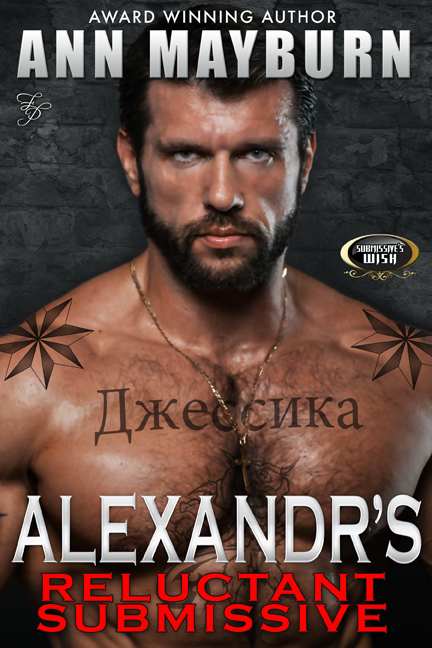 This ebook is licensed for your personal enjoyment only. This ebook may not be re-sold or given away to other people. If you would like to share this book with another person, please purchase an additional copy for each person or use proper retail channels to lend a copy. If you’re reading this book and did not purchase it, or it was not purchased for your use only, then please return it and purchase your own copy. Thank you for respecting the hard work of this author. To obtain permission to excerpt portions of the text, please contact the publisher at
[email protected]
.

‘Alexandr’s Reluctant Submissive’ is part TWO of a two part story. Please read ‘Alexandr’s Cherished Submissive’ first so you get the full enjoyment of the rather complex story. My Iron Horse MC series crosses over with my Submissive’s Wish, so if you want the background on some of the characters from Iron Horse that make an appearance, check out the first book in the series ‘Exquisite Trouble’ .

As always I would like to thank my Beta readers Lisa Simo-Kizner, April Symes, Angela Plumlee, Diana Sandvik, Kara Belseth, and Meghan Dickinson for their tireless efforts to wade through my illiterate first draft crap. I would also like to thank my editor Kelli Collins for not making me cry. And to you, my beloved reader, thank you as always for giving me the chance to entertain you. Now buckle up your seatbelt and grab a cold drink and a fan because you are in for a hell of a ride.

a mhuirnín
- Irish for ‘my darling’

bogger
- An Irish term for someone outside the city, a farmer, someone country/redneck

Bratva
- The Russian Mafia, more specifically it’s often used to denote the different organizations. For example, the Novikov Bratva, or the Sokolov Bratva.

Eto piz`dets
- This is fucked up

Gobshite
- A variation of shit, especially in Ireland and the United Kingdom

prinsessa moya
- Russian for ‘My princess’.

Sinn Féin
- is an Irish republican political party active in both the Republic of Ireland and Northern Ireland.

Sladkaya moya-
Russian for ‘My sweet’.

Sovietnik
- ("Councilor"), is the advisor and most close trusted individuals to the Pakhan, similar to the Consigliere in Italian-American Mafia crime families and Sicilian Mafia clans.

To, chto ty delayesh' so mnoy
- Russian for ‘What are you doing to me?’

Ti takaya krasivaya
- Russian for ‘You are so beautiful to me.”

Ti tak velikolEpna
- You are so beautiful

Solid warmth blanketed Jessica, a soul-healing scent flavoring each slow breath she took. She floated in divine comfort, her hands roaming over the expanse of a man’s cloth-covered chest, the softness of his jacket pressed to her cheek. God she loved the feeling of a high-quality suit perfectly fit over hard muscle. Rubbing her nose against his solid pectoral muscle, she soaked up his essence and sighed. Her body rose and fell with his deep breaths, and she relaxed further, perfectly content to let him pet her, knowing nothing would ever be able to harm her while he held her so tenderly.

Big, strong hands stroked her as gently as could be, running up and down her body, over and over again, warming her from the inside out. Those long fingers were familiar; the scarred, tattooed, massive hands that could kill a man yet barely skimmed her body in a controlled sweep. Everywhere he touched, her skin tingled with little sparks of heat, even where his caress was hindered by her clothing. And he stroked her everywhere except where she wanted his clever fingers the most.

She frowned at that thought, stiffening, then the soothing petting motions stopped for a moment and someone tenderly kissed her forehead, someone with facial hair and pillow-soft lips.

The need to see who held her tried to surface from her overtaxed mind, but he’d resumed his cuddling and she abandoned herself to his body-melting touch. She’d forgotten how good it felt to be with a man who worshiped her, who did everything he could to bring her pleasure because it made him happy. The more he touched her, the more aware of him she became. Her skin grew sensitive and she wanted to explore more of his intriguing body. The muscled expanse of his chest under her fingertips trembled for a moment as he let out a shuddering sigh. The smooth weave of his open suit coat slid like silk against her skin and she took a moment to relish the erotic promise of his muscled torso covered by his thin dress shirt.

His scent filled her, an exotic blend of key lime, bergamot, and cedar wood that worked with his natural scent in a way that was divine.

Whoever this dream man was, his heart pounded so hard she could feel it drumming against her palm like a hummingbird’s wings. He fairly trembled with tension while she continued to hold her hand against his body, absorbing his heat. His stroke lingered on her side, then his thumb brushed her breast and a hard bolt of desire shot straight to her pussy, dampening her panties in a rush of longing.

His light touch skimmed every part of her body he could reach, over and over again, as if he was memorizing the feel of her. Every once in a while he’d stop to lightly kiss her somewhere. Once he did it on both of her cheeks, then the pulse point of her wrist and each of her fingers.

What an odd dream.

Her thoughts surfaced a bit more from her sleep and she flinched, her gut filling with dread.

God no, she was dreaming of
him
again. The man she was forbidden to think about. Her illicit craving. A shocking sense of loss filled her and she curled in on herself, so terrified to let this fantasy take root, to let her sick mind abuse her broken heart with things she could never have again. While awake, she could guard herself from these delusions that felt so real. The dreams themselves were wonderful, stolen moments reliving memories of her past where she reveled in his love. Unfortunately, when she woke up, they always left her with the heart-bruising sensation of having lost him all over again.

Fuck, she hadn’t had one of these dreams in weeks. Like a junkie, she was unable to force herself wake, her resistance only intensifying the feeling of being with him. A shudder worked through her as she raised her hand to his face, not daring to open her eyes. Sometimes, when she was dreaming of Alex, not looking at him somehow seemed to extend her time with him. God, how she treasured those stolen moments, when her waking mind couldn’t block her bittersweet memories. They cut like glass and she craved the numbing pain.

Her fingertips encountered the prickle of a beard and she paused momentarily, trailing her fingers along his jawline. When he’d been her husband he’d had a goatee. He’d started growing a beard two years ago but she’d never dreamed of him with one.

“
Jessica
,” he said, with such painful emotion that the tears threatening her eyes finally escaped and flowed hot down her cheeks, their salty wetness dripping over her chin.

“Alex,” she sobbed without shame, his name broken by her hitching breath.

How could she ever forget the power of his voice? Even if she was just imaging it, the deep sound rippled over her skin like a caress, making her aware of her body being cradled on his lap. Audio caramel, sticky-sweet and sinful.

The longer this dream went on the more intense it became, and she found herself daring to open her eyes. Oddly enough, even in her dream her vision was blurry from crying with her contacts still in. With a practiced blink, she quickly removed her colored contact lenses, putting them without thought into the pocket of her jacket.

As her gaze focused, she realized right away that she was in terrible, terrible trouble, because this was not some harmless fantasy.

This was reality, hard and unbearably cruel.

With her body frozen, she stared up at Alex and died a thousand deaths as she drank in every inch of his face with a starved desperation, both terrified and elated.

No, this had to be some desperate fantasy her mind made up. There was no way she was in Alex’s arms, on a brown leather couch in the middle of an enormous Mediterranean-style bedroom. It was merely a dream.

Trying to refuse the reality of her situation, she looked everywhere but at the man holding her. She’d dreamt of Alex more times than she could count, enough to quickly realize that the situation she was in right now was different from even her most vivid imaginings. She’d never have dreamed of an older Luka staring at her with such intensity that she almost became trapped by his mesmerizing hazel-green eyes.

The reality of her situation came crashing down around her as she stared at her old friend, barely breathing, her gaze locked with his. Luka had changed, his face harder than it used to be, his eyes blanker, and he had a stillness to his entire being that kind of freaked her out. Instantly her mind went to the most likely—and prayed for—explanation as to why she was here.

Hope filled her and her voice came out shaky as she said, “Luka, did Krom send for me? Is it safe?”

He gripped the back of the nearby brown leather chair he was standing next to, sagging as if she’s slapped him, his full lips parting in shock. “What?”

At his baffled look, her heart plummeted. “Is it safe!? Krom said if it was safe he’d bring me back to Alex. Is. It. Safe?”

He couldn’t have looked more puzzled, more shocked, if he’d tried. “I do not understand.”

“He promised me,” she near shouted, aware of Alex watching her as she lifted a little from his arms, unable to process him on any level at the moment and doing her best to ignore him entirely. “He promised he’d come get me when it was safe. He swore it! Is it safe?”

With a shaking hand, Luka ran his fingers through his thick light-brown hair. “
Eto piz`dets
, Krom does not remember anything from that night, no matter how hard he tries.”

Her lower lip trembled and she hated how broken her voice sounded. “He forgot?”

“Yes, from being shot in the head. Jorg’s men found him near the back of the house. He was near dead from blood loss.” Luka shook his head repeatedly. “All this time he’s been thinking he was responsible for your death, when he saved your life. I swear to you, Jessica, he didn’t know that you weren’t really dead. He would have moved heaven and hell to come for you, we all would have.”

Another male voice captured her attention from across the room, one she’d desperately yearned to hear. “Jessica, sweet lass, we’re so glad you’re alive.”

Her breath hitched in her chest as she slowly turned toward the sound of that familiar brogue. The sight of her uncle Peter had her blinking as fast as she could to try to keep her tears at bay. Her uncle had a lot more wrinkles than when she’d last seen him, and more white in his hair, but other than that he was still the robust man she remembered. He moved as if to come to her, but the arms gripping her tightened and the man she’d forbidden herself to think about growled that familiar growl.