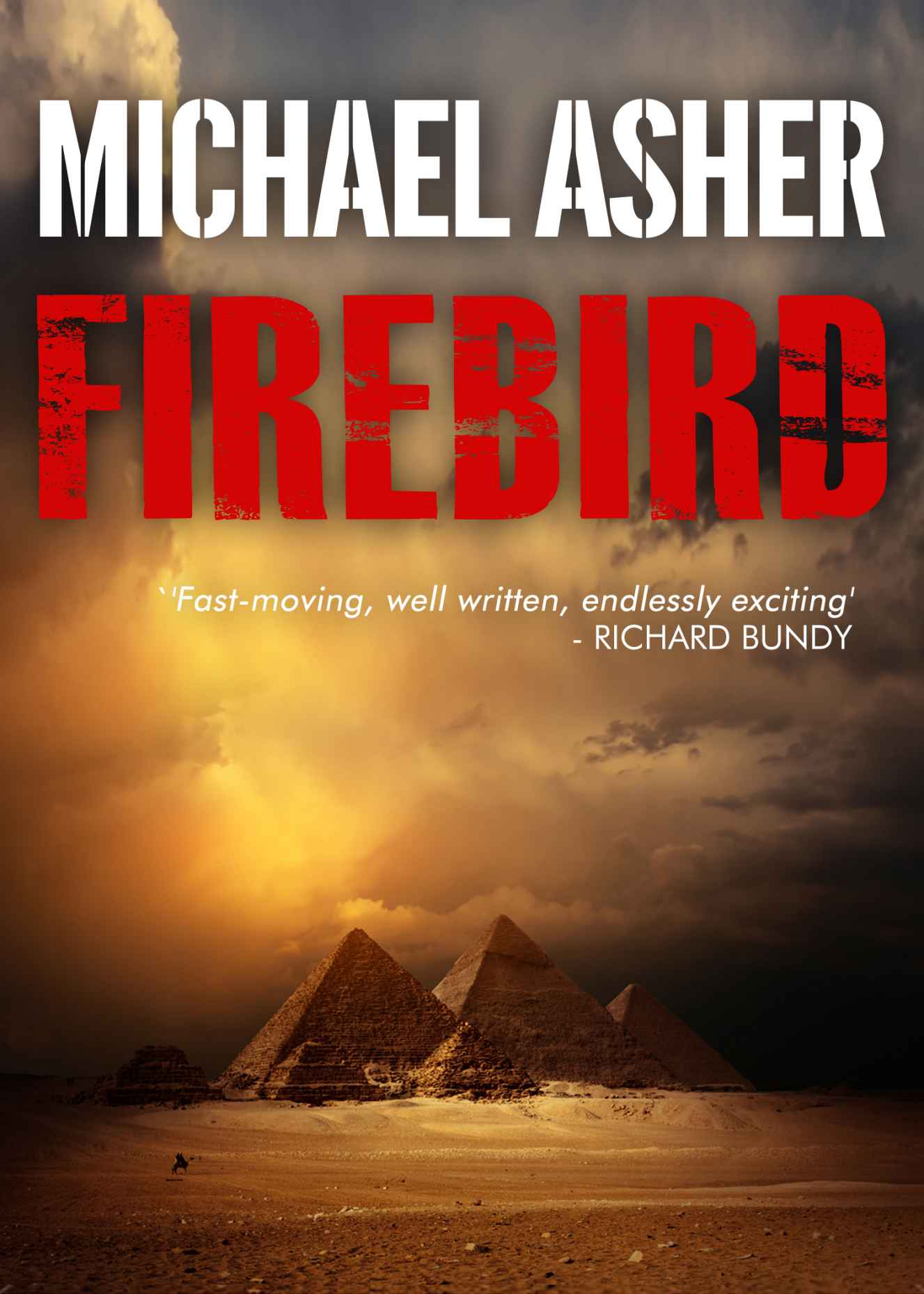 Michael Asher has asserted his rights under the Copyright, Design and Patents Act, 1988, to be identified as the author of this work.

This edition published in 2015 by Endeavour Press Ltd.

Extract from
Shoot to Kill
by Michael Asher

A storm was coming. The heat pulsated from a sapphire and ultramarine sky streaked with veins of blood coloured dust among the foaming eddies of altocumulus. Professor Milisch Andropov smelt fire ash on the air and frowned as he watched an Egyptian vulture plunge down like a stone, taking refuge in the branches of the tallest eucalyptus tree. He savoured the breeze, trying to calculate how long it would be before the storm struck, and reluctantly gave the gardeners the order to shut off the water cocks. He lit a cigarette and watched the last of the water draining out of the feeders that took it among the olives, almonds, figs, oleanders, bougainvilleas and jasmine that filled the monastery garden.
Damn
the
storm
, he thought. In the twenty years he’d been coming to St Samuel’s he’d seen the monastery transformed from a virtual ruin into a living, thriving religious community, and water had been the key to that change. He’d put in bores to tap the aquifers deep under the desert surface, harvested the occasional rains by turning every cloister and rooftop into a conduit, designed a reclamation system which meant that in a good year the place could exist in almost perfect homeostasis — the ecologist’s dream. Andropov glanced up again and saw that the sky had darkened, the clouds coalesced into a single dark configuration that hung over the monastery like the claw of a giant. He shivered. It was a
ghibli
— the fearful southern wind that had been known to blind men and scour the paint off cars. The plants in the cloister garden hadn’t evolved in the desert, and a severe
ghibli
could wreck the place and set back his irrigation work by weeks. He stared at the vulture high in the eucalyptus tree, a hunchback shape with a piercing eye that glared back at him like a malevolent old witch.

It was a bad omen, he thought.

His reflections were interrupted by a high pitched keening, and he looked down to see a procession entering the cloister through the main arch. The wind was whispering and sifting sills of dust across the quadrangle, and for a moment it seemed to him that the party had been blown in willy nilly by the storm. Even from this distance, though, he could make out that the figures were Bedouin, and that they were carrying something among them on a makeshift stretcher. The stiffness and formality of their movements suggested to him a funeral cortege. A moment later the monastery’s lay medical assistant, Da’ud — a grizzled Copt from Asyut with a permanent scowl — came shambling towards him. ‘Professor, come quickly please!’ he said breathlessly. ‘Someone has been hurt!’

At the gate there were five or six sullen Bedouin in dirty
gallabiyyas
and turbans coiled tight around their heads against the wind. On the crude rope bed they held what looked like a bundle of bloody rags from which the head of a boy protruded — a boy with blood smeared hair, an ash white face and fixed, staring eyes. A woman in black behind them wailed and screeched, ‘
Waladi
!
Ya
Waladi
!’ My son! My son!

‘For God’s sake, shut up, woman!’ Andropov snapped in Arabic. ‘To the infirmary! At once! At once!’

Da’ud led them across the square to the infirmary building, and Andropov trotted along behind, fumbling in his pocket for the key to the operating room. There was no incumbent doctor at St Samuel’s and the Patriarch, Father Grigori, who normally supervised the sick, was absent. Andropov had been a medical student before he’d shifted to Earth Sciences, and though he’d never practised professionally he’d seen enough sickness and injury in his time to double as medic when he was staying here. He urged the cortege into the little operating room and the men laid the boy on the table. He washed his hands quickly, put on gloves and told Da’ud to set up the intravenous drip, then switched on the operating light. The Bedouin pressed around him muttering and the woman blubbered to herself. He gripped the oldest looking of the tribesmen tightly by the arm.

Outside, the storm was swelling, pressing against the window with probing fingers. When the rest of the tribesmen had gone, Andropov peeled back the sheet and what he saw almost made him retch. Half the skin of the boy’s torso had been flayed off and his genitals had been mutilated beyond recognition. There were lacerations on his legs, arms and shoulders so deep that in places he could see the arteries pulsing and glimpse the ends of shattered bones. The boy’s breathing was laboured, and he was quivering in shock. Andropov drew a deep breath and explored the thigh wound gently. His first impression was that the boy had been slashed with a machete or cut with an axe, but on second look he realized the wounds were too ragged — they looked more like they’d been gouged with a rake, he thought.

The man was old, with skin like tanned goat hide, his face long and curved at both ends like a crescent moon, with outsized ears and an expression of such dolt like blankness that Andropov knew it had to be false. He was a village headman, he guessed, probably from one of the settled tribes who claimed Bedouin ancestry but were actually peasant farmers. Andropov knew the monks despised them, because their religion was a hodge podge of Islam, superstition and witchcraft. They had their own medicine men, he knew, and would never have come to the monastery if the boy hadn’t been at death’s door. The Bedouin’s eyes were as cold and hostile as a fish’s.

‘I never saw it,’ he said. ‘Nobody here did. When we got there he was already bleeding.’ He stared at the floor. ‘Probably a bull camel,’ he said, ‘It’s the rutting season. You stand in the way of a rutting bull camel on heat and he’ll rip you apart.’

‘I’ve seen camel bites,’ Andropov said, ‘and this isn’t one of them. Camel bites show signs of crushing, and this doesn’t. It’s almost...almost as if he was mauled by a leopard.’

‘No leopards round here,’ the old man said, lifting his eyes to Andropov. ‘Used to be, maybe in my grandfather’s time, but now there’s only caracals and they beat it as soon as they get a whiff of
Bani
Adam
.’

Andropov sized the man up again and noticed that he was carrying a big, greasy service revolver stuck in his belt. ‘Why do you bring firearms into a monastery?’ he demanded. ‘Don’t you know this is God’s place?’

A cold smile spread across the Bedouin’s wrinkled features. ‘There’s only one way of dealing with a murderous bull camel,’ he said. ‘Besides, you never know when you might come across a blood enemy.’

Andropov stared at him for a moment. The tribes here were riddled with feuds that lasted for generations, and he wondered if that was what lay behind the boy’s injury. Without knowing quite why he suddenly snatched the pistol from the man’s belt and opened the chamber. It was filled with silver bullets. ‘What’s this?’ he said, picking out a round and holding it up in the light to the medical assistant. ‘Silver bullets? Da’ud, what in God’s name is this about?’

Da’ud looked at the silver slug then stared at the boy’s shattered body. An expression of terror slowly crept into his eyes. ‘God protect us from the devil!’ he gasped, stepping back from the operating table. ‘Don’t touch him, Professor! This is the work of a ghoul.’

Andropov glared at him. ‘Ghouls? Witchcraft?’ He turned to the old man with fury in his eyes. ‘You tell me what’s going on here,’ he snapped, ‘or I’ll send for the police.’

The old man blanched, then nodded slowly and watched Andropov with bulging, sand shot eyes. ‘All right,’ he said. ‘It was a ghoul. God preserve us from Satan! Only silver bullets can kill a ghoul.’

The old man’s mouth curled into a crooked smile, showing a mess of yellow teeth. His eyes remained cold as needles. ‘I know a ghoul’s work when I see it,’ he said.

‘You said it wasn’t the work of a camel — true, but it wasn’t a leopard or a caracal or a hyena neither. There were tracks near the body — strange tracks. The man who found the boy said he saw a creature running into the desert — a hairy thing that walked upright on bandy legs. We tracked it out into the
khala
, and we’d have got it too if it hadn’t been for the
ghibli
.’

Andropov shivered and turned his back on the old man. ‘Very well,’ he said, ‘wait outside.’

There was a waft of fine dust as the door opened, and the momentary drone of the wind. The boy was moaning softly, his eyelids fluttering. As the door closed, Da’ud stared at the patient again and backed away. He made the two fingered sign against the evil eye. ‘Leave him, Professor. The ghoul is within him. If it knows he’s dying it will cross over.’

Andropov gave him a withering look. ‘Shut up! Give me some morphine — quickly!’

The Copt fumbled in a glass cabinet and came out with a sterile syringe, a needle and a phial of clear liquid. The Professor grabbed them from his shaking hands, fitted the needle, then snapped off the top of the phial with calloused fingers. When he’d filled the syringe he held it up to the light for a moment and flicked it with his index finger. He was about to insert the needle into the side of the boy’s buttock, when his eyes snapped open, his body convulsing wildly, his head writhing from side to side. The back of his hand caught the syringe and flipped it skittering across the floor. The Professor made a grab for him, and as he did so the boy grasped his wrist and gripped it with the strength of a drowning man. The look of horror in his eyes was so shocking that the Professor recoiled. ‘What happened?’ he asked. ‘What was it?’

The boy stared sightlessly at the ceiling, his eyes bright with death. His purple lips moved haltingly. ‘Ghoul!’ he whispered. ‘Ghoul!’