Read Amanda Carter in the L.A.Z., life after zombies Online

Amanda Carter in the L.A.Z., life after zombies 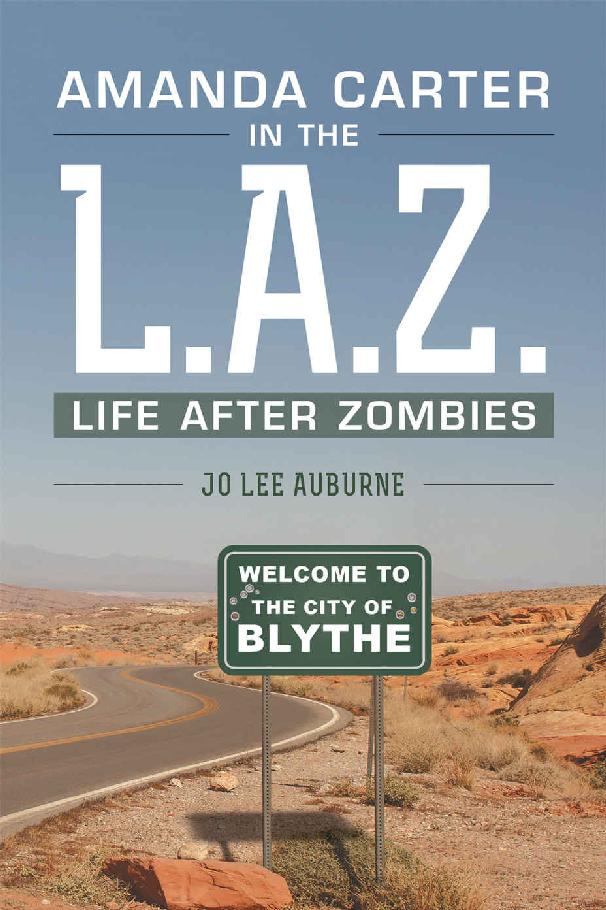 T
he tunnel had a dank, damp smell. The stale air had combined with leftover chemicals that burned her nostrils. She tried not to breathe too deeply. This wasn’t the safest place to seek shelter for many reasons. The mine had last been in full operation during the late 1800s, and since then, young people had used it to party in, homeless desert rats had made camp here, and a few ambitious amateur miners had tried to turn a profit from it. But considering the circumstances, it was probably the best of her current choices to lay low for a while.

She desperately needed rest, and her body ached from exertion; salty sweat dripped from her pores, its residue clinging to her skin. The seemingly relentless desert sun showed no mercy and wouldn’t for another couple of months.

She felt an urgency to get back to the others, to make sure that they were safe, but for now, she was cut off. She had abandoned the overheated truck several miles back, along with all the supplies that she had managed to scavenge from town. There were others left that would kill for those supplies, and they were desperately needed back at camp. She questioned whether she had made the right choice in leaving it, but still, no other option presented itself.

With any luck
, she considered,
I will be able to circle back around and see if the truck is salvageable
. The best-case scenario was that once it cooled down, she’d be able to put some water in it and head back to the others. They were waiting for her, depending upon her, and a life hung in the balance of the choices she would make today. The worst-case scenario was something that she preferred not to think about: besides being caught by “them” and dying out there, the truck might not start up even after it cooled down and she added fluid. If that happened, she would have to hike the fifteen or so miles back to camp, carrying as much as she could, while avoiding the creepers and the raiders. She shuddered.

Amanda bit down on her lip while she considered her options. Camp had another vehicle, a Jeep that was low on gas. She could carry some water, gas, and a little food, plus the medicine, back to camp, then grab Roy and drive back to the truck. Roy, being a mechanic, might be able to get the truck started if she could not.

The Jeep wouldn’t hold everything that was in the truck if they had to abandon the truck altogether. There was a hundred-gallon metal drum filled with eight hundred pounds of very-needed water that the Jeep simply wouldn’t be able to carry. Sweat dripped down her brow and into her eyes, stinging. She reached to brush it away. These days in the LAZ were filled with life-altering decisions that needed to be made on a daily basis. Amanda was becoming accustomed to making tough choices like the one she had already had to make today.

The old mine shaft was at least ten, if not, fifteen degrees cooler than the outside temperature. She had to guess at that because it wasn’t like she could look it up on a cell phone. There were no more apps for that. She had read someplace that the properties of earth, dirt, made for a terrific insulator.

Amanda let out a deep breath and took too big of a drag of rancid air. She coughed.

Before moving any farther into the shaft, she slung her pack off of one shoulder and let it hang upon the other while she reached in and pulled out a sports drink. This was a much-coveted item, and they were becoming harder to find as the days went by.

Even as she enjoyed her drink, she batted her thoughts around, looking for suitable solutions. But even so, she remained alert, ears listening, eyes watchful. She knew that she might not be the only one or only thing in here.

All was quiet, save for the sound of the wind tearing at the mouth of the shaft. Still, even a little ways into the mouth, the wind was hot but effective at whisking away the sweat that still dripped down her body, soaking her clothes. She decided to move forward a few more feet and let the wind sluice her. Her clothes dried almost instantly, and a white, salty film was visible on some of her skin.

Amanda stepped back, finishing the last of the sports drink. She tossed the bottle aside. Plastic doesn’t burn clean, and there were no more places to recycle it. The bottle would remain there, probably for decades.

Well
, she thought,
the world might have been overrun by a faulty creation
. Society, as she had known it, might have entirely collapsed, but all was not lost. She shimmied out of her pack and then slithered down the wall of the tunnel into a seated position. She unzipped the pack and felt around inside it until her hand located that which she was seeking: a bottle of spiced rum.

It was really against her nature these days to let her guard down, especially when out alone with no one to watch her back. Then there was everyone back at camp, wondering if she would return, waiting for supplies. By now, they would be rationing water more than usual. But Amanda knew that right now there was nothing to be done about any of that. She needed to wait it out, and that was the only way that she would make it safely back to them.

It felt so right and so wrong, as she cracked the cap on the bottle. She took a moment to bask in the smell of the rum. Since the world had become overrun, it seemed like everything and everyone smelled. The creepers smelled even before they could be put out of their misery. People smelled of a lack of hygiene and hygiene products. Human waste had no proper disposal. Corpses littered any area that was once populated; but mostly, people stank of fear, and that was a powerful smell.

In contrast to all the other smells, the rum was a delightful bouquet. She took a swig, feeling the burn as it passed down her throat.
Glorious
, she thought, taking one more, smaller sip.

It was a stupid idea to be drinking alcohol in this heat. It would only add to the dehydration factor, but she had already taken so many risks today that adding one more wouldn’t make much of a difference.

Feeling satisfied, she slipped the glass bottle back into the pack, hearing the rattle of the pill bottles that she had luckily come across during her scavenging. Medicine was an extremely rare commodity.

Amanda had, she realized, been careless in another way that would have to be remedied, and so she stood. She could still feel the burn in her throat, but unfortunately—or perhaps, fortunately—she was not feeling even the slightest bit of a buzz from the alcohol.

She unclipped her flashlight from the pack. Turning, she shone the light down into the dark shaft. The light successfully pierced the darkness but only so far as to cut into it, like a knife slicing into cake. Much of the tunnel remained hidden from sight, even with the light. She began walking farther into the shaft, deciding to play the light back and forth so as to illuminate as much of it as possible. The last thing she wanted was to discover a nasty surprise.

Even if there were no creepers in here, there was still the chance of encountering raiders, rattlesnakes, mountain lions, or bobcats. This shaft would offer little by way of escape routes, which didn’t put her in an ideal situation. “But let’s face it,” she told herself, “these days’ living was dangerous.”

As she moved farther in, she could hear or see nothing except earth, the steal tracks that were partially covered—where a mine car had once slid, and the occasional debris left over from days long ago. The light unveiled the metal head of a pick ax, but its wooden handle had long since disintegrated. Once, not too long ago, she had taken great delight in making discoveries like this, photographing them and logging their locations into her journal. But those days were gone, and she couldn’t foresee them ever returning.

Amanda was familiar with this particular mine shaft; she had explored it in her life before the catastrophe, though she had not been here recently. She walked carefully, being certain to examine her steps before she placed them. Up ahead, she knew that the floor had collapsed, leaving a fifteen- to twenty-foot drop into another shaft below this one that appeared to be running parallel, though that tunnel had collapsed at the entrance long before she had ever discovered it.

She walked farther down the tunnel, feeling a little uneasy as she went, listening to the occasional groaning of the earth around her. She had remembered that this was not the most stable of all the mines that she had explored.

Finally, she came to the place where the original floor had dropped. The chasm that the collapse had left was about six feet wide. Someone, not too long ago, had bridged that gap with a two-by-six piece of lumber. She tested the board. It had some spring to it, but it appeared that it would hold her weight. Carefully, she stepped across the board until she reached the other side.

Amanda had been correct; it was much cooler this far back into the tunnel. But the quality of the air felt worse. Without proper ventilation, the air was stale—maybe worse than stale.

Her imagination told her that these tunnel systems went for miles under the ground, but she did not know this for certain. She traveled no further into the shaft. No creepers would have been able to negotiate crossing the plank, and there was a strong likelihood that there were no raiders here either.

Amanda pulled the plank over to her side, ensuring that the gap would not be crossed, thus buying her a measure of safety. She decided to get some sleep for an hour or two. By then, she imagined, the herd of creepers that she had escaped from should have passed. Then she could get to work on making her way back to the others.

She had thought that sleeping here under these circumstances would be difficult, but she was wrong and quickly fell into a deep sleep. In her sleep, creepers had come down the tunnel, filling it from side to side. As each one came to the drop in the floor, it would fall—first one, then another, and another, until the entire bottom floor was littered with creepers that had no way out. In her dream, she found this to be funny.