CHAPTER 9
The World Turned Upside Down

PEOPLE OF THIS GENERATION

SONGS OF THE SIXTIES

BREAKING THROUGH THE SILKEN CURTAIN

THE LIBERATION OF WOMEN

THE PERSONAL IS POLITICAL

PART IV • The Crosswinds of Freedom

CARTER: THE ARC OF MORALITY

CHAPTER 13
The Culture of the Workshop

THE DICING GAME OF SCIENCE

THE RICH AND THE POOR

PART V • The Rebirth of Freedom?

CHAPTER 14
The Kaleidoscope of Thought

CHAPTER 15
The Decline of Leadership

THE STRUCTURE OF DISARRAY

A REBIRTH OF LEADERSHIP?

MEMORIES OF THE FUTURE: A PERSONAL EPILOGUE 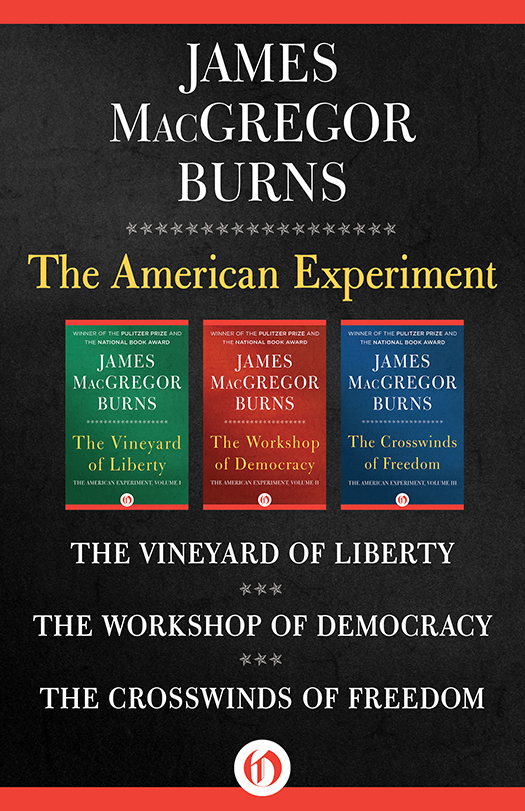 The American Experiment
The Vineyard of Liberty
James MacGregor Burns

To the vital cadres of history—the archivists, librarians, research assistants, and secretaries—who make possible the writing of history

I sought in my heart to give myself unto wine; I made me great works; I builded me houses; I planted me vineyards; I made me gardens and orchards, and pools to water them; I got me servants and maidens, and great possessions of cattle; I gathered me also silver and gold, and men singers and women singers, and the delights of the sons of men, and musical instruments of all sorts, and whatsoever mine eyes desired I kept not from them; I withheld not my heart from any joy. Then I looked on all the works that my hands had wrought, and behold! all was vanity and vexation of spirit! I saw that wisdom excelleth folly, as light excelleth darkness.

From
Ecclesiastes,
as quoted by Thomas Jefferson, 1816

PART I • Liberty and Union

CHAPTER 1
The Strategy of Liberty

A RAGE FOR LIBERTY

THE COURSE IS SET

DIVISIONS ABROAD AND AT HOME

CHAPTER 4
The Trial of Liberty

THE VENTURES OF THE FIRST DECADE

SHOWDOWN: THE ELECTION OF 1800

“THE EYES OF HUMANITY ARE FIXED ON US”

TO LOUISIANA AND BEYOND

CHAPTER 6
The American Way of War

“THE HURRICANE …NOW BLASTING THE WORLD”

FEDERALISTS: THE TIDE RUNS OUT

CHAPTER 7
The American Way of Peace

VIRGINIANS: THE LAST OF THE GENTLEMEN POLITICIANS

THE CHECKING AND BALANCING OF JOHN QUINCY ADAMS

JUBILEE l826: THE PASSING OF THE HEROES

CHAPTER 8
The Birth of the Machines

FACTORIES: THE LOOMS OF LOWELL

CHAPTER 9
The Wind from the West

THE REVOLT OF THE OUTS

THE DANCE OF THE FACTIONS

MAJORITIES: THE FLOWERING OF THE PARTIES

CHAPTER 11
The Majority That Never Was

PART IV • The Empire of Liberty

CHAPTER 12
Whigs: The Business of Politics

THE WHIG WAY OF GOVERNMENT

THE ECONOMICS OF WHIGGERY

CHAPTER 13
The Empire of Liberty

TRAILS OF TEARS AND HOPE

THE GEOMETRY OF BALANCE

CHAPTER 14
The Culture of Liberty

THE ENGINE IN THE VINEYARD

SCHOOLS: THE “TEMPLES OF FREEDOM”

LEADERS OF THE PENNY PRESS

ABOLITIONISTS: BY TONGUE AND PEN

PART V • Neither Liberty Nor Union

“IT WILL RAISE A HELL OF A STORM”

CHAPTER 16
The Grapes of Wrath

THE POLITICS OF SLAVERY

THE FLAG THAT BORE A SINGLE STAR

MEN IN BLUE AND GRAY

THE BATTLE CRIES OF FREEDOM

A
S AMERICANS GAINED THEIR
liberty from Britain in the 1780s, they had only the most general idea of the great lands stretching to the west. But the scattered reports from explorers had indicated abundance and diversity: a huge central plain and valley drained by a river four thousand miles long; beyond that, an endless series of mountain ranges rising to rocky peaks and interspersed with burning deserts; and then a final mountain range sloping down to a green coastal fringe on the Pacific. There were stories of boundless physical riches in the bottomlands of the rivers, the herds of buffalo stretching for hundreds of miles, primeval forests so thick that migrating geese could fly over them for a thousand miles and never see a flash of sunlight on the ground below.

People living in the thirteen states in the east savored these reports, but they savored even more the diversity and abundance of their own regions. They too could boast of lush valleys and lofty mountain ranges, ample farmlands and invigorating climate. New Hampshire farmers could still be battling blizzards while Virginians saw their first tobacco plants breaking through the red soil. And their own explorers spoke of the matchless beauties of the east. One of these was Thomas Pownall, an eminently practical young Englishman who had helped plan the war against the French and Indians, and in the 1750s had been rewarded with the governorship of Massachusetts.

A tireless traveler along the seaboard and into the mountains, Pownall set about making a map of the “middle British colonies.” A no-nonsense type, he ended his map at the Mississippi and dismissed most of the topography of central Pennsylvania as “Endless Mountains.” But Pownall, in doing his work, was constantly distracted by the charm and luxuriance of the land he charted—the wild vines and cherries and pears and prunes; the “flaunting Blush of Spring, when the Woods glow with a thousand Tints that the flowering Trees and Shrubs throw out”; the wild rye that sprouted in winter and appeared green through the snow; above all, by the autumn leaves: the “Red, the Scarlet, the bright and the deep Yellow, the warm Brown,” so flamboyant that the eye could hardly bear them.

Pownall was eager for Americans to learn from European experience with the cultivation of crops. But he was cautious about trying to transplant
European vines to the American climate, with its extremes of dry and wet, its thunderous showers followed by “Gleams of excessive Heat,” when the skins of “Exotic grapes” might burst. Better, he said, that Americans try to cultivate and meliorate their native vines, small and sour and thick-skinned though the grapes be. Given time and patience, even these vines could grow luxuriant and their grapes delicious.

Some ten thousand years ago or more, big-game hunters from Siberia crossed over the Bering Strait and pushed down along an ice-free corridor through Canada to the grasslands below. These were the first Americans. As they fanned out to the south and east they hunted down and killed countless bison, mastodons, mammoths, and other game with their grooved spears. It took the descendants of these onetime Mongols about a hundred and fifty years to reach the present-day Mexican border and the Atlantic coast, and another six hundred to cross the Isthmus into South America. By that time, they had killed off almost all the big game and had mainly turned to growing maize and other grains.

By the 1780s, Americans living along the Atlantic—immigrants from the opposite direction, the east—had lived with the Indians, as they were misnamed, for a century and a half. Whites tended either to idealize red people as noble savages or to fear and despise them as shiftless, thieving, cruel, ignorant, and Godless. Actually, the Indians were as polyglot and diverse in character as were the European Americans three centuries after Columbus had arrived in the New World with his ship’s company of Spaniards, Italians, Irishmen, and Jews.

Vodka by Boris Starling
How to Read Literature Like a Professor by Thomas C. Foster
The Book of Madness and Cures by O'Melveny, Regina
Figures in Silk by Vanora Bennett
Betting on Love by Jennifer Johnson
Bonded: Book One of the ShadowLight Saga, an Epic Fantasy Adventure by Matthews, Mande
The Misfits by James Howe
Asgard's Secret by Brian Stableford
Krewe of Hunters 8 The Uninvited by Heather Graham
If He's Noble (Wherlocke Book 7) (Paranormal Historical Romance) by Hannah Howell