Read An Affair of the Heart Online

An Affair of the Heart 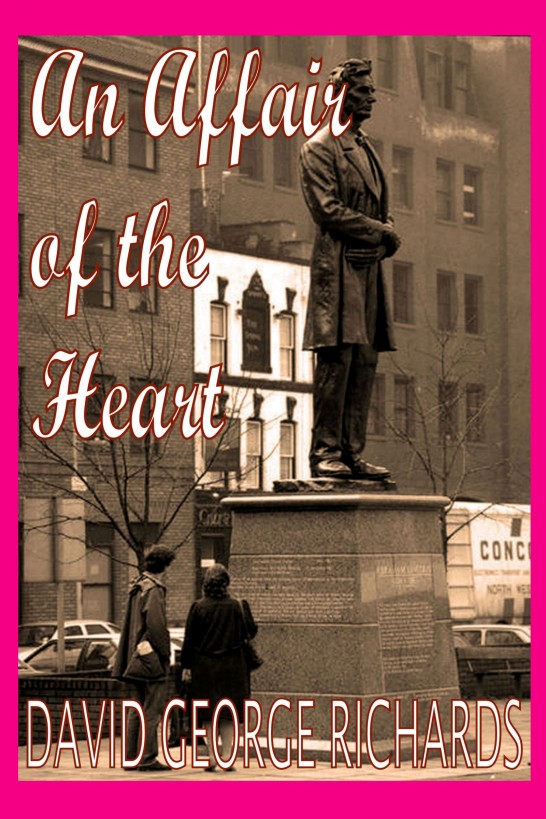 DAVID GEORGE
RICHARDS is married and lives in Manchester, England. He has been
writing for several years on a regular basis. He writes science
fiction, thrillers and romance stories with particular emphasis on
leading female characters. Visit his website at
www.booksandstories.com.

An Affair of
the Heart

The Look of
Love

The Beginning
of the End

A Gathering of
Angels

Walking with
the Enemy

In the Shadow
of Mountains

The Return of
the Sixpack

The Tale of the
Comet

An Affair of
the Heart

This ebook is
licensed for your personal enjoyment only. This ebook may not be
re-sold or given away to other people. If you would like to share
this book with another person, please purchase an additional copy
for each recipient. If you’re reading this book and did not
purchase it, or it was not purchased for your use only, then please
return to Smashwords.com and purchase your own copy. Thank you for
respecting the hard work of this author.

There’s more
to love than meets the eye
…

Chapter
One
The Object of
Desire

Sarah wiped the
tears from her face as she drove through the brightly lit streets
towards the city centre. She felt no remorse after the argument
with Alex. He had it coming. It had been a devil of an argument,
though, a real blazing row. They had shouted and screamed at one
another for what seemed like hours, it must have lasted for most of
the evening. And then he had struck her. She was stunned at first,
and even Alex had looked sort of shocked. But the pause had not
lasted long. She had thrown crockery in retaliation. Lots of
expensive crockery. Alex had dodged about screaming at her to stop,
but a vase had caught him above the left eye and he had fallen
down. That was when she had finally left.

All her plans
with Robert had gone out of the window. It was all going to be
so meticulously planned and carried out. God, they had even
opened new accounts for her in a false name. But everything
was still at the house. She hadn’t even brought her handbag or a
coat with her. She had just snatched the car keys from the
sideboard and left. All she was wearing was a tee shirt and
jeans. She felt so stupid, and yet triumphant as well.

It was finally
over. She couldn’t have stood it any longer. Her marriage with Alex
was destroying her; he was destroying her.  Slowly,
relentlessly, he was squeezing the vitality and spirit out of her.
He was hardly ever there, and when he was, he questioned
everything she did. Who she saw, where she went, how she behaved.
What had once been love had turned into infatuation and a
possessiveness that was bordering on paranoia. He had become
insanely jealous. But she had never dreamt that he was opening her
mail, or that he would actually hire someone to follow her.

When he had
accused her of having an affair with Robert, everything had just
come out. It was such a relief to tell him, to get it all out into
the open at last. When she had actually uttered the words, telling
him, finally, that she was leaving him at last, it had been such a
blessed relief. Alex just seemed to explode. How could he think
that he could stop her? What could he possibly tell her to make her
stay now? And what else could he do? Lock her in her own
bedroom?

Sarah laughed.
She was glad she had left him. And so what if she had brought
nothing with her? She didn’t care. She was just glad to be out of
it. She didn’t care about the money, the house, or any of it
anymore. She just wanted to be rid of it all. She wanted to be with
Robert. She wanted people to see her with Robert. She was sick of
hiding their affair, of always having to be secretive and furtive.
Now that her marriage was over, she wanted everybody to know.

Soon she would
be at Robert’s apartment, crying in his arms, telling him
everything. He would know what to do. She could be with him at
last.

The car came
out of nowhere. Sarah snatched at the steering wheel and stamped on
the brake in panic. The tyres squealed in protest as her white
convertible swerved and skidded onto the wrong side of the road.
The driver of the other car also fought with the steering wheel,
and Sarah had a fleeting image of his young face, teeth bared. He
seemed very young, and there were other young faces in the car with
him. Just boys and girls. Then the car flashed past, and Sarah saw
the second car behind it. It was coming straight towards her, as
her own car slid sideways right into its path. The driver of this
car was also a woman, probably not much younger than herself, and
Sarah could see her eyes grow round with terror as all four wheels
of her car locked up, and it continued to skid relentlessly
forward.

Sarah knew that
the car was going to hit her on the driver’s side, broadside on;
that there was nothing she could do to stop it, and that it was
going to injure her very badly. But for some reason she was not
scared. And in the last drawn out moments before the cars collided,
she thought briefly about Robert, worried that he wouldn’t know
which hospital she had been taken to. But the authorities wouldn’t
tell him, would they? No, only Alex would be told. Sarah realised
with mounting horror that she didn’t want that to happen. She
wanted Robert to be at the hospital, she wanted Robert by her
bedside, not Alex.
She wanted Robert
. There was an explosion
of glass accompanied by a very loud crunching, crumpling sound, as
the door and bodywork flew in at her in a sudden rush. Sarah felt
the impact against her body. But then the doorframe hit her head
hard. After that, there was nothing...

Robert McCord
sipped his Bacardi as he picked up the telephone. He was surprised
by who was on the other end. He smiled.

“You can get
the hell back to America, you lying, cheating bastard! That’s what
you can do for me!”

Robert’s smile
grew wider. “Oh, I see,” he replied, taking another sip from his
drink. “Any particular reason for your sudden request?”

“You know damn
well why!” Alex shouted down the telephone, his voice hoarse. “I
know all about you and my wife! And you’re not going to get away
with this, do you hear me!”

“By the way
you’re shouting down the phone, I should think my partners in
Chicago can hear you!”

“Don’t try and
be funny! I tell you I’m onto your little game, McCord, and it’s
not going to work! Sarah might have been taken in, but not me! I
know about the money, McCord! I know everything I tell you!
Everything! And you’re not going to get away with it! Do you hear
me! Because once Sarah hears the truth, you’re finished!”

Robert felt a
hint of panic. Could Alex really know what was going on? Everything
had been planned so carefully, and Sarah had gone along with every
step. It couldn’t go wrong now. He had to do something. Best to
admit the affair, it would give Alex something to chew on. But not
the rest. No, not yet.

“You don’t fool
me!” Alex almost snarled down the telephone. “You’ve lost, McCord!
Get out of the country while you still can!”

“How dramatic!”
Robert laughed. “What happened to your stiff upper lip, Alex?” he
added.

“I’m warning
you, McCord!” Alex went on. “If you’re still in the country
tomorrow, I’m going to ruin you! Do you understand me? I’ll destroy
you completely!”

“Okay, Alex!
The jokes over!” Robert’s voice grew stern. “I don’t like threats,
and to be honest, I don’t like you either. Now, my law firm is
doing real fine here in Manchester, and my partners are real
pleased with the way I’ve been handling things here in England, so
I have no intention of leaving. And remember, Alex, I’ve been your
lawyer –sorry, solicitor– for over six months now. That means I
know everything there is to know about you, and your business. So
if you even try and give me a hard time, you’re the one who’s going
to be sorry!”

“You just don’t
know what you’re dealing with, do you? You’ve got no chance of
winning, McCord! And do you know why? Because I don’t give a toss
about anything except Sarah. I don’t care if it costs me absolutely
everything so long as I get her back and smash you!”

Robert took his
cue to put the knife in. “Sarah’s already left you, hasn’t she?” he
said coldly. “That’s what all this is really about, isn’t it? She’s
already on her way. Good! I’ll be thinking about you when she gets
here, Alex, and I know you’ll be thinking about us, too. Thinking
about me holding her in my arms, touching her, kissing her, and
making love to her…”

The telephone
went dead. Robert put the receiver down carefully and took a deep
breath. He stared out of the window of his top floor apartment at
the view of Castlefield below. He could see the canal basin with
the pubs lining the waters edge, and the many people milling about,
drinking, talking and smiling. Robert suddenly flung the drink he
still held across the room. It smashed against the wall; its
contents staining the wallpaper. “Shit,” he muttered.

“Joy riders
make me sick!” WPC Foster said to her partner as she drove down the
A556 towards Knutsford.

“I know,” PC
Roberts replied. “But they were only kids. And I don’t think they
realise how dangerous it is. I mean, they don’t want to die, do
they?”

“It serves them
right, I say!”

“But they were
only kids, Jill.”

“So what? Those
two women they killed were the only innocent parties. And now we’ve
got to tell some poor sod that his wife’s dead. And for what?
Nothing! It wasn’t even her fault! I just think it’s a shame that
the fourth little git didn’t die as well.”

“Don’t let the
Sarge hear you talk like that!”

“He probably
thinks the same as me.”

“Thinking and
saying are not the same thing,” PC Roberts pointed out.

Jill Foster
became silent. She had been a police constable for two years. And
this was the third time she had been involved in a road traffic
accident and had to pass the news of the death of a loved one on to
a relative. She hated it. It always made her feel so stupid and
inadequate. And it was always for no good reason. Fog. Drunken
driving. Joy riders. She sighed. What sick person had thought up
that name?

It had taken
two hours of manic pursuit by six police cars around the city
centre before the chase had finally come to an abrupt end. Faced
with a roadblock, the driver of the stolen car had attempted a
180-degree hand brake turn and had got it wrong. The car had
overturned, rolled five times, and then demolished a lamppost.
Three of the four occupants had died almost instantly, the fourth,
a young girl, was now in intensive care in Manchester Royal
Infirmary.