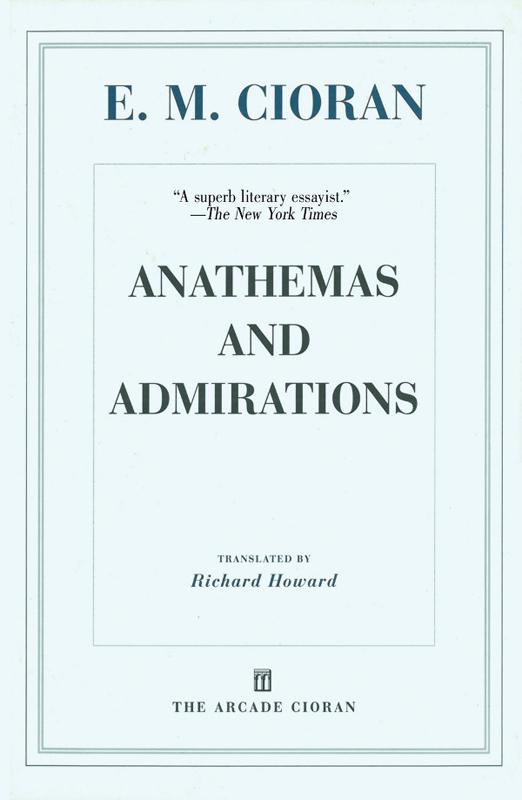 Translated from the French by
RICHARD HOWARD

Arcade Publishing® is a registered trademark of Skyhorse Publishing, Inc.®, a Delaware corporation.

1 On the Verge of Existence

5 The Lure of Disillusion

20 She Was Not of Their World

We like to imagine that poets die poetic deaths. One thinks of Shelley, who, after having reportedly seen his doppelgänger, drowned off the coast of Tuscany while sailing out to sea in his boat, the
Don Juan
. Or Nietzsche, the “mad” philosopher and iconoclast who suddenly collapses in Turin while witnessing the flogging of a horse, his tear-leaden arms thrown around the animal’s neck. In the 1990s, an emaciated, elderly man with sharp eyes and wavy hair is found sitting on the side of the street somewhere in Paris’s Latin Quarter. He is lost. He can recall neither the way back home nor even his address. He is taken home. Eventually he stops eating. After an accidental fall, he is brought to a hospital. He drifts in and out of lucidity, rarely recognizing those closest to him. He stops speaking entirely. After slipping into a coma, Emil Cioran dies, on June 20, 1995.

For Cioran, the twilight philosopher who once noted “the stillborn are the most free,” the end came not with melodramatic fair but gradually and quietly, though it was no less tragic. For several years, the Romanian-born writer had been grappling with Alzheimer’s. Writing became more and more difficult. Traveling, lectures, and interviews were impractical. Even a walk out the door took on an almost absurd risk. But Cioran’s final silence was, in a way, a long time coming. By the early 1980s, he was finding it more and more difficult to write, though the themes of his writing—pessimism, despair, melancholy, and a certain ecstatic antagonism towards the world—these continued to find their way into his increasingly sparse work. Now well into his seventies, he and Simone Boué continued to live in their Rue de l’Odéon apartment, where he divided his time between long walks in the Jardin du Luxembourg (where he and Samuel Beckett would often cross paths) and writing aphorisms in the cheap, multicolored Joseph Gibert notebooks he had been using for years, and that piled up on his desk in the hazy light of his top-floor writing alcove.

The present volume is a hybrid of Cioran’s last two major publications. In 1986, the solitary stroller who once wrote: “Solitude: so fulfilling that the merest rendezvous is a crucifixion,” published a book about friends and colleagues entitled
Exercices d’admiration
. It collected short articles written between the 1950s and the 1980s; some of them are about writers with whom Cioran had long-standing friendships (Samuel Beckett, Mircea Eliade, Henri Michaux), while others were about writers with whom he shared a certain temperament (Jorge Luis Borges, F. Scott Fitzgerald, Paul Valéry). There are lesser-known names, too: the Spanish philosopher María Zambrano, the Italian journalist Guido Ceronetti, and the Romanian-Jewish poet Benjamin Fondane.

The list is highly eclectic and situational, and between each essay, Cioran’s tone varies widely. Sometimes his writing becomes a hymn that sings the praise of an author, sometimes it takes on a personal, even autobiographical form, and sometimes the writing is cagey and contentious—often Cioran’s tone will encompass all of these at once. Of Beckett, for instance, Cioran has this to say: “He lives not in time but parallel to it, which is why it has never occurred to me to ask him what he thinks of events.” Of Borges, he writes: “The misfortune of being recognized has befallen him. He deserved better. He deserved to remain in obscurity, in the Imperceptible, to remain as ineffable and unpopular as nuance itself.”

Exercices d’admiration
is accompanied here by another, quite different book. Struggling with the gradual loss of his memory, in 1987 Cioran publishes
Aveux et anathèmes
(which could be translated as “Confessions and Curses”), a short book of aphorisms on the persistence of time, memory, and mortality. Composed of short, staccato fragments, the writing has all the urgency of a last word, and yet the almost tranquil distance of a documentarian: “How age simplifies everything! At the library I ask for four books. Two are set in type that is too small; I discard them without even considering their contents. The third, too ... serious, seems unreadable to me. I carry off the fourth without conviction.” Following the publication
of Aveux et anathèmes
, Cioran decides to stop writing altogether. But it is a gesture already in his mind early on. In a 1980 letter to a friend he notes: “Even the idea of writing makes me queasy, and with it comes disgust, failure, and a complete lack of satisfaction that, not daring to admit this to itself, turns sour.”

True to form, Cioran’s final writings were the result of a lived contradiction. A hermit singing the praises of others, an amnesiac obsessed with the persistence of memory and time. Circumstance or chance has deprived Cioran of the romantic death; all that remains is writing that leads to its own silence. But if there is a “poetic” image of the later Cioran, perhaps this is it.

In any book governed by the Fragment, truths and whims keep company throughout. How to sift them, to decide which is conviction, which caprice? One proposition, a momentary impulse, precedes or follows another, a life’s companion raised to the dignity of an obsession. . . . It is the reader who must assign the roles’, since in more than one instance, the author himself hesitates to take sides. The epigrams constitute a sequence of perplexities — in them we shall find interrogations but no answers. Moreover, what answer could there be? Had there been one, we should know it, to the great detriment of the enthusiast of stupor.

On the Verge of Existence

W
HEN CHRIST HARROWED HELL, the Just under the old law — Abel, Enoch, Noah — mistrusted his teaching and made no answer to his call. They took him for an emissary of the Tempter whose schemes they feared. Only Cain and those of his race adhered to such doctrine, or professed to, and followed him out of hell. Such was the doctrine of Mareion. “The wicked prosper,” that old objection to the notion of a merciful or at least honorable Creator — who consolidated it better than this heresiarch? Who else so acutely perceived its invincibility?

Kusanagi by Clem Chambers
Murder at the National Cathedral by Margaret Truman
Soldier of the Queen by Max Hennessy
Spells & Sleeping Bags #3 by Sarah Mlynowski
Out of the Ashes (Rise of the Empire Book 3) by Ivan Kal
Someone Like You by Cathy Kelly
The Greatest Gift by Michael John Sullivan
Galen by Tianna Xander
Respect (Mandasue Heller) by Mandasue Heller
Sizzling Nights with Dr. Off-Limits by Janice Lynn