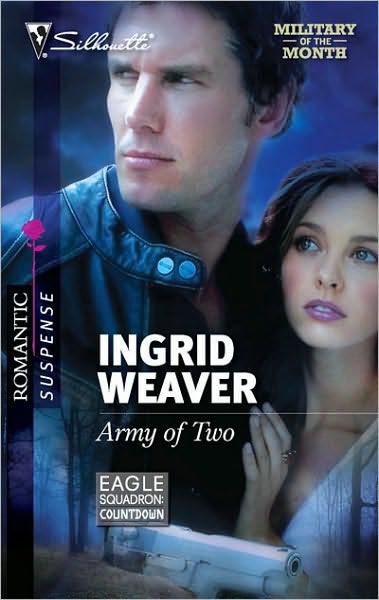 “Don’t you feel, Mitch? You act as if nothing touches you. Nothing bothers you. You’re always in control.”

He freed his fingers from hers, reversed his grip and held her palm to the side of his neck.

“Don’t mistake control for a lack of feeling, Chantal. I feel everything,” he said. “I’m as worried as you are about the welfare of the hostages, maybe more, because I’ve seen what can happen when situations like this go wrong.” He pressed her hand more firmly to his skin. “I’m concentrating on my duty so I can shut everything else out, but I can’t turn it off entirely.”

She shuddered. “That’s what I mean. I can’t turn it off, either.”

“And if things weren’t already complicated enough, for the last ten minutes, I’ve felt your body under mine and your hair tickling my cheek. A minute ago I felt the curve of your breast under your jacket and right now I can feel the trembling in your fingers. I’ve been doing my damnedest to ignore all of that, too.”

Leave it to Mitch not to beat around the bush.

Become a fan of Silhouette Romantic Suspense books on Facebook and check us out at www.eHarlequin.com!

Army of Two
was a labor of love for me right from the start. I’ve had a crush on Major Mitch Redinger since he popped up in the first book of my original EAGLE SQUADRON series. He was so noble, so dedicated to his men and his missions—and so handsome in his uniform!—he deserved a story of his own. Many of you readers agreed.

The only problem was, I had given him a wedding ring. Luckily, I hadn’t given him a wife to go with it. Believe me, I combed back through the books to make sure she was no longer in the picture. Those stories had been my first experience with a miniseries, and I hadn’t realized when I started how many details had to be kept straight. I can only hope that no one was too confused by one character’s changing eye color. Maybe he’d decided to wear colored contacts and had forgotten to tell me.

Anyway, I knew Mitch wouldn’t give his love easily a second time. Thus I needed to find a character like Chantal, who had loved him first. To my delight, her crush on the major turned out to be even bigger than mine.

propped an old manual typewriter on her children’s playroom table to write her first novel. Twenty-six books later there’s a computer in place of the typewriter and a RITA
®
Award on the corner of her grown-up-sized desk, but the joy she found in creating her first story hasn’t changed. “I write because life is full of possibilities,” Ingrid says, “and the best ones are those that we make.” Ingrid lives on a farm in southern Ontario, where she gardens in the summer and knits in the winter. You can visit Ingrid’s Web site at www.ingridweaver.com.

This book is dedicated to the real heroes, the men and women who serve in our armed forces.

T
he Aerie perched on an outcropping of rock that thrust straight out from the hillside. Its entire front wall was made of glass, providing a bird’s-eye vantage point that wasn’t for the faint of heart. From the second-floor gallery, Chantal Leduc could see across the lake to the line of distant mountains that held the northern end of the Appalachian Trail. Above it all stretched a wild and endless expanse of sky that never failed to lift her spirits.

The view was only one of the reasons she loved this place. She loved the homey smell of wood smoke that lingered in the log walls, and the solid, here-to-stay sound her footsteps made on the plank floors. There were misty mornings when the lake was a mirror and the air was so pure it tasted sweet. On clear nights, the stars were as thick as the pebbles on the shore. Every winding trail strewn with orange pine needles and each majestic spruce that swept its branches up the hillside had a regal, timeless beauty. Here was the peace she’d struggled to achieve. Here was sanctuary.

None of that would change simply because
he
was coming. He would only stay a week. She could manage that.

Chantal curled her hands around the gallery railing and peered into the lobby. The boy who looked up at her was all pre-adolescent arms and legs, as eager to please as a puppy. His father was the cook, his mother the resort’s accountant and assistant manager. The pair had been part of the package when Chantal had taken over the business, although they felt more like family than employees. She remembered how Henry had been a mere toddler the first summer she’d come to work here. Some of the furniture in the dining room still bore the scratches of his toy trucks. “Yes, Henry?”

“I think that’s them,” he said, pointing out the window.

She scanned the sky, and her hands tightened on the railing. He’d picked out what she hadn’t yet seen. There was a speck to the southeast above the horizon that glinted in the rays of the lowering sun. Though it was too far to distinguish any details, it had to be the helicopter they were expecting. No one strayed this far into Maine’s North Woods by accident. “Let your dad know we’ll be serving dinner in an hour,” she said.

He waved and disappeared beneath the gallery. Chantal could hear the rhythmic thump of the aircraft now, vibrating through the walls and windows. She remained where she was and watched the speck grow larger while she went through a mental checklist. Linens. Towels. Food and liquor. Wood for the fireplaces. Gas for the outboards. The storage batteries from the solar panels were fully charged and should handle their power needs, but there was also plenty of extra fuel for the emergency generator. “Rustic luxury” was how she described the atmosphere in her brochures, and that’s what she aimed to deliver. The Petherick Corporation had paid handsomely for the exclusive use of the lodge for a full seven days.

The request hadn’t been unusual. The Aerie’s isolation made it an ideal site for corporate retreats. Chantal wasn’t the only one who had discovered the restorative powers of this place. She had a growing client base of city-weary executives. Normally she enjoyed providing the means for them to unwind, do team building or entertain their customers. This was what she did, and she was good at it. She should be feeling a pleasant glow of anticipation right about now.

Yet what she felt was too intense to be called pleasant. Major Mitchell Redinger would be on that helicopter. And the knowledge made her feel like an inept teenager, as awkward and eager to please as Henry.

On the inside, anyway. Outwardly, it had to be business as usual. So what if Mitch was on his way here? It shouldn’t make any difference. He was part of the delegation from the army that the Petherick Corporation was trying to woo. He would eat the food she had chosen, sleep in one of the bedrooms she had decorated, watch the same sunrise that she did and perhaps stroll the same pine-needled paths. Just like any other guest.

Yes, and that’s how she had to treat him. Like any other guest. It had been seventeen years, after all. He might not even remember the last time they’d seen each other.

But she did. Oh, God, how could she forget a humiliation like that? Every excruciating moment of it had been burned into her memory.

“Miss Leduc, did you lock the door to the meeting room? I can’t get it open.”

Chantal drew in a steadying breath, straightened her spine and turned away from the railing. One of the college students who had hired on for the season was balancing a tray of water glasses in one hand while she used the other to shove against the door at the far end of the gallery. She should have realized at the Aerie, only the guest rooms needed locks.

Chantal eyed the wavering glasses as she hurried forward. “Hang on, Rhonda,” she said. She grasped the knob in both hands and gave it a sharp, upward jerk. The latch clicked immediately. “The wood swells sometimes,” she said. “Especially when we get the kind of downpours we had last week. It’s one of the lodge’s idiosyncrasies.”

Rhonda thanked her and carried the glasses inside. She was followed by her brother, Tommy, another student, who was carrying a large bottle of purified water on his shoulder. He installed it on the cooler opposite the long slab of polished pink granite that served as the top of the conference table. The room faced the hillside rather than the lake. Only yards from the window, a living wall of evergreens blended with maples that had been colored by frost.

The room Chantal had prepared for Mitch was at the front, with a view of the water. She’d thought he would enjoy that. And for her own peace of mind, the selection put him as far as possible from her own suite at the back of the staff quarters. Cowardly, perhaps. Unnecessary, for sure. He was no more likely to care whether he saw her now than he had cared seventeen years ago.

Extreme Prey by John Sandford
Ain't Gonna Be the Same Fool Twice by April Sinclair
Men After God's Own Heart by Dijorn Moss
Melody of Truth (Love of a Rockstar Book 3) by Nicole Simone
Deadly Blessings by Julie Hyzy
Leah's Story Finding Jake by Hoy, E.S
The Wedding: A Faces of Evil Short Story by Debra Webb
How to Beguile a Beauty by Kasey Michaels
A Feast of Ice and Fire: The Official Game of Thrones Companion Cookbook (A Song of Ice and Fire) by Monroe-Cassel, Chelsea, Lehrer, Sariann
From Morocco to Paris by Lydia Nyx