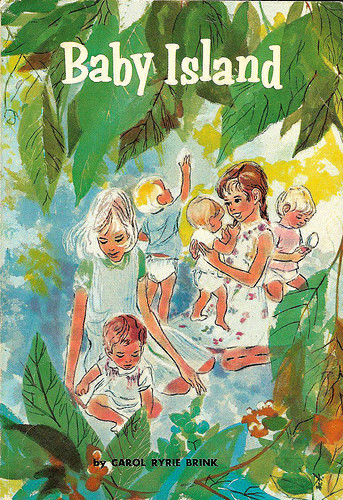 Shipwrecked! For twelve-year-old Mary Wallace and her ten-year-old sister Jean, floating on the sea in a lifeboat seems more like a dream than reality—actually, more like a nightmare. But they’re not the only survivors of the ocean liner, sunk on its way to Australia. On board their tiny boat with them are four bouncing babies. Whether or not any of them will survive, though, is questionable.

Hope comes in the form of a deserted island. But will this become their home for the rest of their lives?

This is the classic tale of courage and dedication by one of the most popular authors of children’s books, CAROL RYRIE BRINK. Her other titles include Newbery Medal-winner
Caddie Woodlawn, Magical Melons,
and
The Bad Times of Irma Baumlein
, all available from Aladdin Paperbacks.

Copyright © 1937 by The Macmillan Company

All rights reserved including the right of reproduction in whole or in part in any form.

Summary: Twelve-year-old Mary Wallace and her ten-year-old sister Jean survive the wreck of an ocean liner on its way to Australia and manage to make it to a seemingly deserted island in a lifeboat with four babies.

When I was a small girl, it was the fashion in our circle to borrow the neighbors’ babies. I myself was never a very accomplished nursemaid, although I had many happy hours pushing the perambulator of a young cousin; but some of my friends had a positive genius for taking care of and amusing babies. They never thought of receiving pay for this delightful pastime. Minding a baby was its own reward.

It is more difficult to borrow babies now, I understand. Whether this is due to a scarcity of babies or to more particular mothers, I am unable to say. But I am quite sure of this: there are just as many little girls who love babies as there ever were, and it is especially for them that I have written the story of BABY ISLAND.

XIII Mr. Peterkin Has His Ups and Downs

XIV Lost in the Storm

XVI An Answer to Jean’s Letters

O
N THE
night of September twentieth the
S.S. Orminta
, two weeks outward bound from San Francisco to Australia, was struck by a tropical storm and badly disabled. In the general panic which followed, nobody thought of the two little girls who were traveling alone to meet their father in Australia. But, although nobody remembered
her
, twelve-year-old Mary Wallace immediately thought of the babies. She was a motherly girl who was never so happy as when she had borrowed a baby to cuddle or care for.

So, when she woke up and found that the boat was sinking, she thought at once of the three Snodgrass babies. She dressed herself, shook her sister Jean and made her dress, and ran to help Mrs. Snodgrass rescue them. Jean, who was ten and a sound sleeper, followed her sister down the corridor with just one eye open and that open only part way. She had been dreaming that she had already reached Australia and was riding beside her father in a big red wagon. When Mary made her get up and dress and follow her through the corridor, she really didn’t wake up at all, but
kept on dreaming that the wagon had broken down and that she was obliged to walk.

Mary, however, was as wide awake as a girl can be. She saw at once that she must be very quick if she were to help the Snodgrasses save their babies, for the big ocean liner was already tipping far over toward one side, and people were frantically rushing hither and thither in the darkness. Somewhere a woman was screaming, and the great engines deep inside the boat were pounding and throbbing terribly. Most girls of twelve would have been frightened, but Mary Wallace was not an ordinary girl. She made her way very coolly and deliberately to the far end of the boat, where Mr. Snodgrass, the Methodist field missionary, shared a large cabin with his wife and three babies. When she reached the cabin, she found the door open and the room apparently deserted.

“They are gone!” cried Mary, and she couldn’t help feeling a little disappointed that they had not needed her help. “The babies are saved!”

But she had spoken too soon, for just then a feeble wail arose from one of the berths. Mary plunged into the dark cabin, calling: “Mrs. Snodgrass! Mr. Snodgrass! The boat is sinking!”

There was no response. Whether the missionary and his wife had gone for help or merely to ascertain the gravity
of the wreck, Mary did not know. But it became plain to her at once that, if the babies were to be saved, she must save them herself. She took Jonah, the very young Snodgrass baby up quickly, and wrapped him as warmly as possible in his blankets. Finding his half-emptied bottle of milk beside him, she wrapped it in the blanket with him, and thrust the whole bundle into the arms of sleepy Jean.

“Don’t you dare to drop him, Jean,” she cautioned.

Then, wrapping the twins with the same hurried care, Mary took one under each arm, and, staggering under their
combined weight, made her way up on deck. There the first thing she saw was a group of frightened sailors who were hurriedly preparing a lifeboat. Without a moment’s delay Mary presented herself before them and said, “Will you please save us?” The sailors readily did what they could for her, and Mary and the twins, the still-drowsy Jean and Jonah were securely installed in the small open boat.

“Oh,” murmured Mary to herself, “if I only could have saved Ann Elizabeth, too! But, of course, she has two parents with only Ann Elizabeth and the white poodle to save, so she will probably be taken care of.”

A great creaking windlass suddenly swung the lifeboat out over the side of the sinking vessel. They hung suspended in midair.

Her Sweet Talkin' Man by Myrna Mackenzie
Burn by Sarah Fine
The Act of Roger Murgatroyd by Gilbert Adair
Troubleshooter by Gregg Hurwitz
Odette's Secrets by Maryann Macdonald
Boys in Blue 02 - Reasonable Doubt by Mia Watts
The Boys on the Bus by Timothy Crouse
The Blast That Tears the Skies (2012) by Davies, J. D
Surrender to Mr. X by Rosa Mundi
Secret Cravings by Sara York