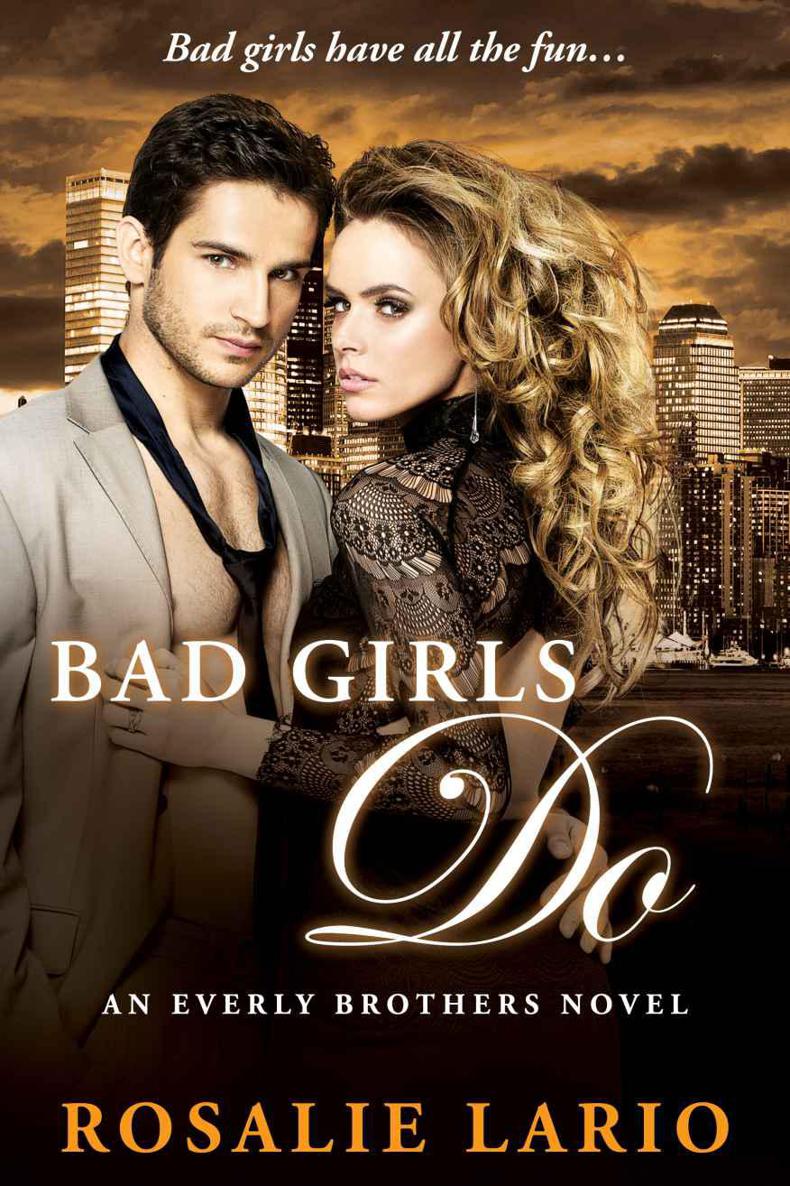 Bad girls have all the fun…

Trying to fit in with expectations has left Diane Milstrom lonely and dateless for yet another New Year’s Eve. After being forced to witness her ex proposing to the woman he dumped her for, she has one too many drinks and makes an uncharacteristically impulsive decision: she’s not going to be good anymore. It’s gotten her nothing but heartache, and besides, everyone knows bad girls have all the fun.

Sam Everly enjoys the lifestyle his family’s wealth provides, but he hates the trappings of society that come with it. If he has to attend one more family function full of bored socialites, he just might lose it. Diane Milstrom, his eldest brother’s ex-girlfriend, is the worst of the lot…or so he always thought. But when he overhears her making a Bad Girl To-Do list, he starts to wonder if maybe there’s more to her than meets the eye. Curiosity gets the better of him, and he volunteers to help her with some of the more…ahem, explicit items on her list.

When Sam points out that being naughty with her ex’s brother is something only a bad girl would do, Diane can’t help but see his point. Besides, she could do worse than a little between-the-sheets action with a sexy guy who makes her heart beat in ways his brother never could. It’s only supposed to be a fling, a way to help her stretch her bad girl wings. But the more items they cross off her list, the higher the stakes become. Because if they aren’t careful, she just might fall in love…and that’s one thing a bad girl should never do.

For news on upcoming stories and special discount prices,
click here to sign up for Rosalie Lario’s Newsletter
.

All rights reserved. Without limiting the rights under copyright reserved above, no part of this publication may be reproduced, stored in or introduced into a retrieval system, or transmitted, in any form, or by any means (electronic, mechanical, photocopying, recording, or otherwise) without the prior permission of the copyright owner.

This e-book is licensed for your personal enjoyment only. This e-book may not be resold or given away to other people. If you would like to share this book with another person, please purchase an additional copy for each person you share it with. If you're reading this book and did not purchase it, or it was not purchased for your use only, then please purchase your own copy. Thank you for respecting the author's work.

G
olden orbs hung suspended from the ceiling, reflecting glittering streams of light in the festively decorated ballroom. Revelers drifted throughout the crowded space, their faces aglow from the holiday merriment. Some of them were watching Ryan Seacrest count down the seconds to the New Year on a big screen TV mounted to one of the ballroom’s walls, but not Diane Milstrom. Her gaze was instead riveted on the scene unfolding just a few feet before her.

A handsome man wearing an expensive, tailored tuxedo was bent on one knee before a pretty brunette with a mass of curls that fell partway down her back. The sequins on her slinky, purple gown glimmered as she lifted her hands to cover her open mouth.

“Hailey Thompson, I can’t imagine my life without you,” the man said to the brunette, yelling so she could hear him over the din of the crowd. “Will you marry me?”

“Oh my god.
Yes
.” The brunette sniffled, a few stray tears streaming down her face. “Yes, of course, I will.”

He slipped the ring on her finger and then, beaming with happiness, rose to scoop her into his arms, just as Ryan shouted, “Happy New Year!”

“Well, shit,” Diane murmured. Of all the things she’d expected to see tonight, this hadn’t been one of them.

Her friend, Angela, made a soft sound of sympathy and gave her arm an awkward pat. “Ouch, sweetie. Are you okay? Is there anything I can do?”

After glancing down at her half-forgotten champagne glass, Diane downed the contents, then held the empty glass out to her friend.

Angela winced but, smart girl that she was, said nothing as she accepted the glass and left to refill the contents.

It wasn’t so much that it was her ex, Andrew Everly, who’d made the proposal, or even that he was proposing to the woman he’d dumped Diane for. No, what really got Diane was that he’d done it right in front of her, as if she were invisible.

Come on, face it. As far as he’s concerned, you
are
invisible.

Andrew wasn’t a cruel man. A little cold sometimes, and an undeniably ruthless businessman, but not mean-spirited. So the odds were he hadn’t even noticed her standing there, less than ten feet from where he’d just mapped out the rest of his life with another woman.

Proving herself to be just as quick as she was helpful, Angela returned with a full glass of champagne for Diane. She gave it to her and then guided Diane by the elbow, turning her and marching them through the crowd.

Diane made sure to hold her head high, just in case anyone she knew had seen what had happened. But they all seemed caught up in their own celebration. Well, at least she didn’t have to contend with a group of witnesses to her personal shame.

When Angela led her to the nearest empty table, Diane gave her friend extra credit for placing them right near the open bar. She had a feeling she was going to be availing herself of that particular option much more before the night was through. Thank god she lived in New York City, where cabs abounded.

“I’m sure he didn’t do that on purpose,” Angela said lamely as she took a seat. The shimmering lights glinted off her auburn strands, which she’d tucked into an elaborate up do.

Years of etiquette training prompted Diane to sit with her spine straight. Of course, that effect was probably ruined by the big gulp of champagne she took, but she couldn’t bring herself to care right now. “I figured that out already.”

“So…how are you feeling?”

Diane thought about it. Honestly, she couldn’t even bring herself to be the slightest bit heartbroken about Andrew being off the market. Their relationship had been lackluster, to say the least. They’d been thrown together by her father, who invested in Andrew’s company and had thought Andrew would be a good match for her. Or, more likely, that Andrew’s wealth would be a good addition to her family’s.

Although she could objectively recognize Andrew’s good looks, they’d suffered a complete lack of chemistry. So much so that they’d dated for months and hadn’t gone further than a few halfhearted goodnight kisses.

So no, it wasn’t his being engaged that bothered her so much. It was the fact that he hadn’t given her a second thought.

“How am I so boring and forgettable that he doesn’t even consider whether or not it would bug me to witness him proposing?”

“I know, I know. But…” Sighing, Diane chugged the rest of the liquid in her glass.

“Take it easy, sweetie,” Angela murmured. “You know you’re not a big drinker.”

Angela let out a short laugh. “You’re not allowed to make that kind of decision when your ex-boyfriend just proposed to his new girlfriend in front of you.”

Diane decided to ignore the fact that Angela was right. She rose to her feet and glided over to the bar, thanking the elegance of her shimmering gold ball gown for at least giving her a bit of confidence. Truth be told, she was feeling pretty undesirable right now.

Sliding her empty glass onto the bar top, she said to the older gentleman in the bowtie, “I’ll have another.”

The bartender took one look at her and said, “You look like you could use something harder. Vodka tonic?”

“Yes, please.” Anything to dull the slow simmer of anger that threatened to heat to boiling.

Angela caught up with her at the bar, worrying away at her lower lip. “Are you sure you should be drinking that?”

Her friend was right to worry. Diane never had more than a glass of wine or champagne. A drinker she was not. The second glass of champagne she’d just consumed was already making her tummy flutter and her head feel spacey.

Just what she needed right now.

Her eyes roved past Angela and landed on the older gentleman who stood halfway across the room, engaged in conversation with another man. Time had thickened his waist and grayed his hair, but her father looked every bit as imposing as he had on the rare occasions she’d seen him growing up. As always, the sight of him elicited multiple emotions. The need to please. The desire to be seen. Anger that he didn’t care for her more than he did. She thought her feelings would’ve dulled after moving in with him earlier this year, but it seemed she still held that childish hope her father would pay her more attention.

Well, she was a fool. The ball had dropped more than ten minutes ago and he hadn’t even bothered to make his way over to wish her a happy New Year.

Her eyes still locked on the figure of her father, she announced to Angela, “My mother thinks I should have a casual affair.”

Angela blinked and a stuttering sound escaped her mouth. She turned back to the bartender. “Make that two.”

The bartender made Angela’s drink with admirable efficiency then set it down in front of her.

Angela grabbed her glass, watched as Diane took another sip, then curled her fingers around Diane’s and led her back to the table. The moment they sat down, she leaned in close. “Let me get this straight. Your
mom
suggested you have casual sex?”

Diane smirked at Angela’s disbelieving tone. She supposed it might seem strange to many people, but she’d only just met Angela when she moved to New York back in February. Angela had no clue what her mother was like.

“If it puts things into perspective”—she took a long pull of her vodka tonic and made a face as the strong liquor burned its way down to her stomach—“my mother just divorced her fourth husband and her newest lover is five years younger than I am.”

Diane glanced toward her father. “I wish I were more like her.”

“Like your mother?” Appearing fascinated, Angela took an absentminded sip of her drink, then let out a hard cough. “Do tell, how so?”

“She’s never cared about propriety or what anyone thinks of her. She lives her life the way she wants to.”

It was something Diane had always both admired and hated about her mother. Simone Edwards was the epitome of a French woman, full of joie de vivre. For a little girl who’d cared too much about others’ opinions, especially her father’s, growing up with Simone for a mother had often been quite difficult.

“When she came to visit last month, she brought her lover to the family dinner. You should have seen my father’s face when he realized the guy was barely old enough to legally drink. It turned all red and purple.”