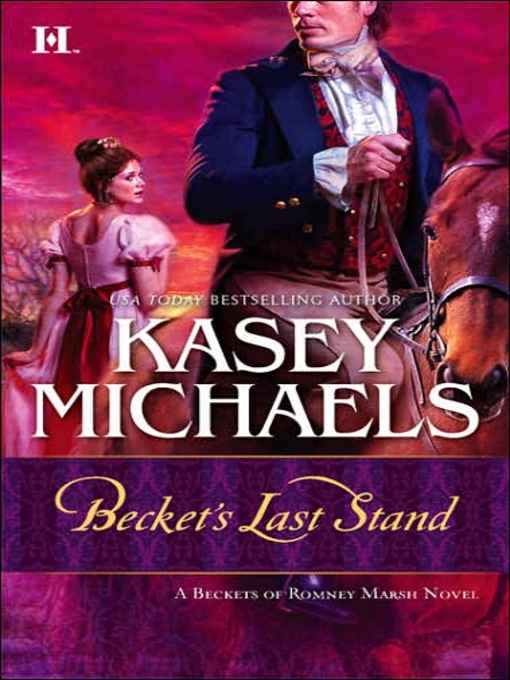 1798
An unnamed island near Haiti

IT WAS THE HEIGHT of summer, hot, crushingly hot, difficult-to-breathe hot. But behind the thick walls of the two-story house set among the towering shrubs, nestled among the swaying palms, the air was relatively cool in the large bedchamber. And that air was sweet with the smell of Isabella's perfume.

Courtland sat cross-legged on the wide-planked floor, holding the young Cassandra in front of him, encouraging her to stand on her chubby little legs. But the child wasn't cooperating. She was much too enthralled with the idea of pulling off Courtland's nose, giggling as she reached for him.

"She's too young to stand," Odette the Voodoo woman warned him as she brushed Isabella's long, dark curls. "Her legs will bow like Billy's and she'll roll when she walks, with you to blame for it all."

Isabella laughed, a sound like the sweetest music, as she leaned closer to the large mirror, slipping sapphire bobs into her ears. "Oh, stop teasing our poor Court, Odette," she said, "that's not true. My sweet baby would never roll when she walks. She will glide, like an angel, and she will float in the dance in this London Geoff promises us, the belle of every ball. We will all be so grand, won't we?"

And then she swiveled on the small padded chair and smiled at Courtland, blew both him and the infant Cassandra a kiss.

Courtland felt his heart skip a beat and knew hot color was creeping up into his cheeks, for he loved the beautiful Isabella with every fiber of his thirteen-year-old being. He didn't know that, of course, because love had never been a part of his life before coming to the island. He only knew he lived for her, would die for her. He lived for Cassandra, and would gladly die for her, too, because she was a part of Isabella, a part of his savior, Geoffrey Baskin.

Cassandra went to her hands and knees, her favored form of locomotion, and crawled onto Courtland's lap, stuck her thumb in her mouth, and within moments was asleep in the afternoon heat. He could pick her up, take her to her cot in the dressing room, but it felt so good to hold the small, trusting body that he leaned his back against the wall and contented himself watching Odette brush Isabella's hair…and thinking of the past, of the day he'd first arrived on the island.

The day had begun as usual, with his seven-year-old self being roughly kicked awake by the boot of the man who insisted Courtland call him Papa. But would a father kick a son, make him sleep with the huge, bad-tempered dogs that were allowed to roam free in the shop at night, fight them for the food that was always too little and often too spoiled to eat? Courtland couldn't be sure, but he didn't think a father should treat his son that way.

The other thing that was usual about the morning was that his papa was drunk. Mean drunk, nasty drunk. And Courtland was sick, having eaten some of the meat that the dogs had left for him, and the vile-smelling vomit on the floor beside him was his own. He didn't want to wake up, he didn't want to clean up his mess. He just wanted to sleep. Sleep forever.

That's when Courtland had heard the worst sound, that of his father's whip being untied from his belt, the braided leather with its several small ends, each tipped with a small lead ball, snapping hard against the floor an inch from his head. He would have cried out, but he'd learned not to do that. He'd learned not to talk at all, not to ever make a sound. It was safer that way. He could almost be invisible, if he didn't talk. Sometimes. Not this morning.

He tried to scramble to his feet, but he was too slow, had moved too late. The whip snaked out again, this time catching him hard across the back, cutting deep into his young skin in at least a half-dozen places. Again. And again. Over and over, until Courtland thought he might die, like the dogs.

But then the blows stopped, and his father cursed, and Courtland heard another man speaking. Quietly, firmly. He dared to lift his head, and saw a tall, dark-haired man dressed in fine black clothes, holding tight to his father's wrist, looking down into his face.

"Billy, take the boy outside. Mind his back as you carry him," the man said as he squeezed harder, and the whip slipped to the floor. "And Jacko, my friend, man the door, if you would, please. This lump of offal and I have something to discuss, and need our privacy."

Courtland had felt himself being picked up, oh so gently, and carried out of the shop, into the morning sun. The man holding him crooned to him, told him he was all right, that the Cap'n would take care of him, that nobody would hurt him, not ever again. That he'd be "just like the other one, most like, God help us all."

But Courtland hadn't really been listening, because the whip had cracked again, only this time not against his back. He heard his father yell, curse. Again, the crack of the whip. His father yelled again, but this time he didn't curse. He had begun to plead, to beg. "Stop! Stop! You can have him— but I'll be paid!"

The whip cracked again, three times in quick succession, and Courtland listened for his father's voice, but it never came. He looked to the door, to the huge, smiling man who stood there, blocking it, and waited for his father to walk out, holding the whip, coming for him once again.

When the door opened, however, it was the tall man who emerged, hesitating only to throw the whip back into the dimness of the shop. He walked over to the man named Billy and held out his arms, so that Courtland felt himself being transferred.

"Hello, son," the man said quietly. "I'm Geoffrey Baskin, and you'll come live with me, if you want. No one will beat you ever again, I promise. What's your name?"

Courtland remained silent, which is how he came to be Courtland, named for a sailor on one of Geoffrey Baskin's ships who had perished of a fever a few months earlier, and he remained silent for nearly six years, until Geoffrey had brought home an angel named Isabella, whose smile and sweet ways had eventually coaxed him into speaking once more.

His very first word spoken on the island had been
Callie,
a gruff, rasping mispronunciation of Isabella's and Geoff's newborn daughter, Cassandra, who would never be called Cassie again, at Isabella's order.

There were other children now, all of them brought to the island by Geoffrey Baskin. Chance, who had already been in residence when Courtland arrived. A newborn infant, Morgan, was brought back from another trip to Haiti. Three years later a half dozen more children, survivors of an attack on a church on another island. Finally, a wild young hothead named Spencer.

Courtland didn't mix with the other children very often. He didn't speak, and they seemed to think that was funny. He stayed by himself, watching, always watching, always waiting for the first sick singing of the whip before it bit into his back. But it never came.

Isabella. She had arrived instead. An angel as beautiful as his rescuer, Geoffrey Baskin, was handsome. And after years of cautious watching, the young Courtland was ready to give his trust, his heart.

Courtland flushed once more and got to his feet, careful to hold Cassandra close as he turned his back, walked over to the open doors that led out onto the veranda that faced the sea.

"Court? Do you see him yet?" Isabella asked, getting to her feet, shaking out the full skirts of her grass-green gown. "I'm so anxious, aren't I? He promised they'd be back before dinner tonight. And then no more grand adventures for my Geoff, not without me by his side as we all sail to our new home. Imagine it, Court. Nearly three hundred of us, all sailing off together, leaving this island behind, a whole new world opening up ahead of us. But still no sign of Geoff?"

Courtland squinted, concentrating on the horizon, the place where brilliant blue-green water met a cloudless blue sky. "No, ma'am, I don't see them. Not yet."

She came to stand beside him, not all that much taller than he, and kissed the soft brown curls on her sleeping daughter's head. "Are you anxious to sail to England, Courtland? Will you miss our small paradise?"

"Papa Geoff says it's time to go. Time to be respectable and safe."

"Being a privateer is respectable, Court," Isabella told him. "Just not respectable enough for my silly husband. He teases that he prefers cold and damp England to our warmth and sun here, and that we will, too. We shall soon see if he's right, won't we?"

Courtland nodded, then looked at the expanse of vibrant greenery and chalk-white sand that led to the water, the horseshoe of land surrounding the natural harbor filled with small houses belonging to the crews of the two ships owned by Geoffrey Baskin. Everywhere was bustling activity as the women added to the small mountains of belongings soon to be loaded on the ships. Transporting three hundred people across the wide ocean was no minor undertaking, but they would be ready to sail within the week.

His gaze singled out Spencer wrestling with Isaac and Rian, two of the boys their Papa Geoff had rescued from the destroyed church. And there was young Fanny, wearing the striped dress cut from extra material from Isabella's new gown; her hair so blond it was nearly white, daring the small wavelets in her bare feet; charging, retreating. He couldn't hear her laughter, not up here, but he knew she was laughing, for Fanny was a happy child, her memory of her mother's death in that same church fading as she grew.

He watched as Fanny began to jump up and down, pointing out to sea, and he followed her direction with his eyes, caught sight of sails flashing in the sunlight as they came around the northernmost part of the island, into the natural harbor. He sighed in relief, knowing Papa Geoff's last adventure as a privateer was now over, that he would be safe. Yes, Courtland supposed he was happy to be leaving here, no longer being forced to worry for his Papa Geoff, his savior, each time the two ships sailed out of the harbor.

"They're back," he said, his breath catching in his throat. "Just as they said they would be."

Isabella kept her hand on his shoulder, also peering out to sea. But then her fingers dug deeper into Courtland's shoulder. "No, that's not Geoff. Three ships, Courtland, see? Three ships, not our two."

Courtland looked at Isabella, saw the worry in her beautiful eyes, and then looked toward the ships once more. What was wrong? No, they weren't their ships, the
Black Ghost

Daughter of the Winds by Bunt, Jo
rock by Anyta Sunday
Leaving Eva (The Eva Series Book 1) by Sivec, Jennifer
For Life by Lorie O'Clare
The Witch's Desire by Elle James
Leave it to Eva by Judi Curtin
Agent 21: Reloaded: Book 2 by Ryan, Chris
How to Find a Job: When There Are No Jobs (Book 1) a Necessary Job Search and Career Planning Guide for Today's Job Market (Find a Job Series) by Rega, Paul
Jaywalking with the Irish by Lonely Planet
La ola by Morton Rhue