Read Bedding Down, A Collection of Winter Erotica Online

Bedding Down, A Collection of Winter Erotica 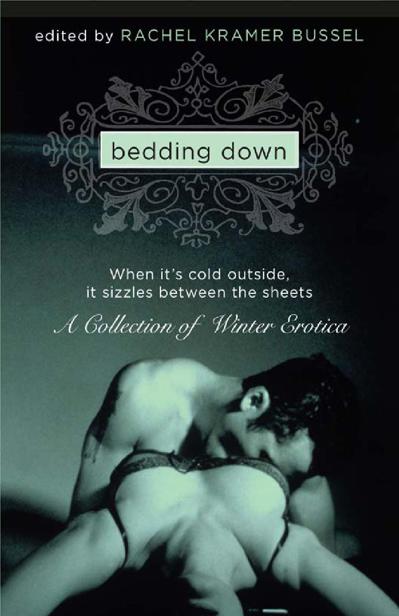 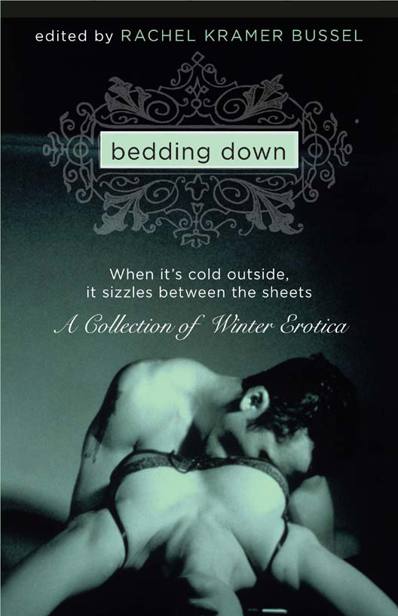 One Night in Winter

It’s Not the Weather

Introduction
:
The Perfect Chill As I write this, the weather in New York has just started to turn chilly, bringing those first crisp breezes, the first hint that winter will soon be here. While summertime is known as the season

when flesh is bared, the truth is that winter is probably when

we need companionship the most, someone to cuddle up with

beneath the sheets, or in front of a roaring fireplace. Someone to keep us so much warmer than any heating device ever could.

The seven novellas presented here offer up stories in which

passions rise in winter, where the flurries of snowflakes provide not just something pretty to look at but an excuse to drop everything and get naked, sometimes actually in the snow. These

characters boldly stare down winter, daring it to derail their

In Kristina Wright’s “One Night in Winter,” a woman con-

fronts a man she thought she’d left far in her past, only to have him get under her skin in the exact same way he used to do. As

she tries to elude him, she only finds herself more and more at-vi

tracted to him, the inclement weather conniving to keep them

together. Gwen Masters brings us a loner hero who’s deliberately secluded himself in the woods, without phone or television or

anything resembling human companionship. But when he finds

a woman trapped in the woods, he takes her in for a stay that’s far longer, and more intrusive, than he intended. California girl Alison Tyler puts a spin on the very meaning of winter with her heroine’s resolutely anti-winter boyfriend; no matter how sexy

of a snow bunny she makes herself, he just can’t quite warm her up in the right ways. The lengths she goes to to woo him are seductive and surprising. In Marilyn Jaye Lewis’s “Baby, It’s Cold Outside,” a couple almost break up over a breakdown. They’re

forced to discover that their passionate memories of lusty out-

door sex spur not only their arousal, but their love for each

other, as they try to rekindle their romance. Another couple trying to revive their former glory is seen in Isabelle Gray’s “Northern Exposure,” as the pressures of marriage weigh heavily on

them. The “Hidden Treasure” in Sophie Mouette’s story turns

out to be much naughtier than the criminals seeking it expect,

and provides the inhabitants of a historic museum the chance to repeat the hottest parts of history. Rounding out this collection, Shanna Germain gives us something delicious and delightful to

curl up with in “Sweet Season.”

make these men and women forget about the chill in the air,

forget about the potential dangers and discomforts of winter,

and simply revel in the thrill of having someone nearby to ward off the cold. Someone whose kiss is enough to ignite a fire deep within, who can make magic happen with a touch of their lips

or a sensual caress. Winter here is both a state of mind and a

time to bed down, to remember what you loved about a person

the first time, and fight to hold onto that sensation. It’s a time when we may bundle ourselves in layers, but are just waiting for the right person to come along and peel them off. It’s as sexy

as sprinkling snow over a lover’s naked body, as huddling close into his jacket, of breathing deep and letting go, and having a special man there to savor it with. I hope
Bedding Down
will keep you warm this winter.

One Night in Winter

Winter came early to Minerva, Virginia. Even the oldest resi-

dents couldn’t remember snow falling before Christmas, but on

Thanksgiving night the mercury dropped. By the time the last

turkey platter had been washed and piece of pumpkin pie con-

sumed, the snow had begun to fall. It was an anomaly, one of

cause there really isn’t anything else to talk about. Then Susannah Greer blew back into town on Thanksgiving night and gave

everyone a different topic to discuss over their morning coffee.

If the editor of the
Minerva Daily News
hadn’t been so preoccupied with announcing “Winter Comes Early!” on Friday morning,

he might have run a headline saying, “The Home Wrecker is

Back! Hide Your Men!”

Of course, no man would have her dressed as she was, look-

ing like an ice princess in a white bridesmaid’s dress. Susannah smiled wryly as she studied her image in the full-length mirror
4

at the Bridal Boutique. The dress was lovely, emphasizing the

dramatic, but it was just so darn . . . white. The other bridesmaids got to wear black dresses, but the maid of honor—her—

“In the event the bride is unable to fulfill her duties,” she

muttered under her breath.

“I can’t believe you’re here,” screeched the bride-to-be as she burst into the dressing room and wrapped Susannah in a bear

hug. “I thought I’d have to send Brad out there to drag you

Susannah felt a moment’s guilt. “Out there” was Seattle, about

country. She hadn’t been back to Minerva in four years. Liz had visited her twice, but not once had Susannah made the trip back to her hometown. Unlike Liz, who was six years younger and

whose memories weren’t as tinged with bitterness, she couldn’t

move on with her life as long as she was mired in her past.

“Hey, sis,” Liz said, meeting her gaze in the mirror. “I’ll be an old married lady like you by tomorrow.”

At the reference to her marriage, Susannah instinctively

looked at her ring finger. The weight of her diamond and plati-

num wedding rings was nearly unbearable, and she tried to dis-

tract her sister to avoid the topic.

“So, everything ready to go? Bridesmaids organized? Grooms-

“Brad and Derrick are picking up the other groomsmen from

the airport tonight and Brad’s sisters have already had their last dress fitting,” Liz said.

At the mention of Derrick, Susannah flinched. She hadn’t

seen Derrick Frost in four years. If she never saw him again for the rest of her life, it would be too soon. Unfortunately, her luck simply didn’t run that way.

“How is the dick—I mean, Derrick? He must be working on

his fourth wife by now, right?”

Liz sighed. “As far as I know he’s only been married once. I

don’t even think he has a date for the wedding.”

Susannah tried to ignore the little jump in her pulse rate.

“The better to bed the female wedding guests. Not that being

married would stop him.”

same time. Once upon a time, she had been hopelessly infatu-

ated with Derrick Frost, the star quarterback of Minerva High

School. She’d been a lowly sophomore when he was a senior,

lived next door to each other.

In the span of one year, her mother had abandoned her and

the nerve to tell him how she felt about him. They spent time

together during the summers, but it was never the same between

them once she was living across town with her grandparents and

trying to be a mother to her sister. By the time Derrick returned to Minerva to settle down—with both a Juris Doctor and a new

bride—Susannah had been on her way to graphic design school

Derrick had arrived back in Minerva in June and she had

been gone by August, but one hot night in July their paths

had crossed at the only dive bar in town. Susannah had been

celebrating her birthday with girlfriends, and Derrick had

looked awfully sad sitting by himself at the bar. By the end of the night, they were at her apartment, having earth-shattering

For a few weeks, they’d had a tumultuous, wild, secret af-

fair. When she asked him about his marriage, he only said it

had been a mistake and he wasn’t ready to settle down. It had

been enough for her. She had never felt so alive as she did during those few weeks with Derrick, but the feeling came at a

very steep price. Derrick’s wife had found out and told every-

one. Derrick wouldn’t answer her calls and then time had run

out and she had to leave for Seattle. His silence, more than the rude comments of people she’d once considered friends, had