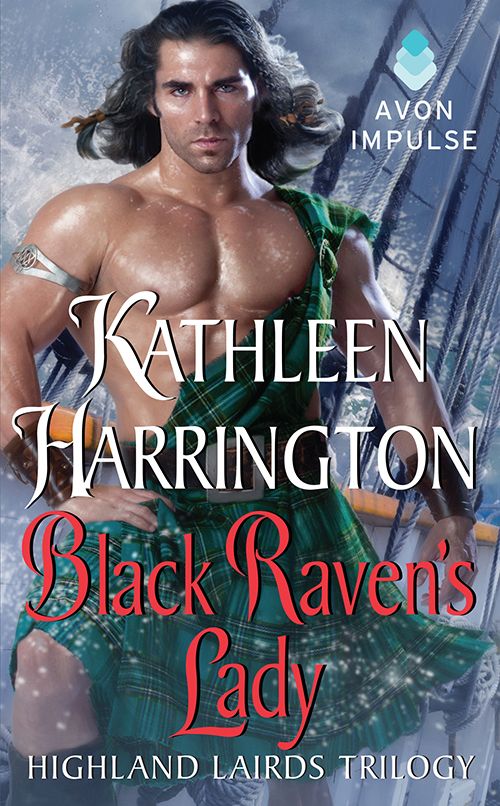 Dedicated with affection and esteem

to my sister writers of the

Thanks, ladies, for all you do!

“C
OME AWAY
WITH
me tomorrow, Nina,” the dark-haired man implored. “Meet me here at daybreak, and we’ll flee together. If you love me, dearest, come with me.”

His deep brown eyes filled with tenderness, he drew the beautiful lass close and kissed her tenderly on the forehead, then used the edge of the yellow-and-black tartan pinned to his shoulder to wipe away her tears.

“My father has received an offer of marriage for me from Laird Cameron,” Nina replied, her voice shaking with fright. “Should I run away with you, Torcall, my parents might never forgive me. Perhaps, if we pleaded with them together, they would understand how much in love we are.”

“I can’t wait any longer, dearest,” Torcall said. “The king has pronounced my father a traitor and with him all our clan. I must go and help defend our home and our lands.”

Nina clutched his strong hand in both of hers and brought his fingers to her lips. Her hair, a stunning red-gold, gleamed in the forest’s dappled sunlight. “Oh, Torcall, I do love you so.”

“Don’t be afraid, darling lass,” he told her, his voice ringing with the optimism of youth. “We’ll go to Steòrnabhagh. My father’s castle on the Isle of Lewis is impregnable. We’ll be married there. One day I’ll be chief of Clan MacMurchaidh, Nina, and I will give you all the things I so long to give.”

She smiled, her blue eyes filling once more with tears. “Your love is all I need, my dear, and all I want.”

Torcall hugged her close, then bent his head to place a gentle kiss on her lips. “You’ll meet me here tomorrow, then?” he asked. “You’ll run away with me?”

Nina nodded, a smile curving her lips. “Aye, I’ll flee with you, Torcall. I’ll meet you here, right by this tall pine tree, when the sun rises tomorrow.”

In the faint light of the following morning, the glen where the couple had stood seemed to wait in hushed anticipation of the coming dawn . . .

H
ER HEART POU
NDING,
Raine awoke with a start and stared at the bed’s canopy above her head. She’d first had the dream when she was fourteen years old. The year after her father, Gideon Cameron, had been murdered. Raine knew it wasn’t an ordinary dream. ’Twas a vision of her mother and Raine’s natural father.

“T
HEN YOU’VE
MADE
up your mind,” Aunt Isabel said.

Raine looked up from her packing to see her aunt enter the bedchamber and quickly close the door behind her.

Isabel’s eyes twinkled mischievously. “I don’t suppose there’s anything I can do to prevent this foolhardy escapade?”

Raine returned to the task of shoving her journal, containing remedies for everything from gout to the relief of painful menses, into the leather satchel that held her herbal concoctions. “You won’t say anything until I’m gone?”

Isabel lifted her plump shoulders, but the smile curving her lips assured Raine of her intent to keep her own counsel. At least for the moment. “What exactly do you have planned, my dear?”

It was Raine’s turn to shrug. “All I know for certain is that I’m going to find my father.”

“Your father is buried in the kirk cemetery,” Isabel chided softly. “He was a brave and honest man.”

“Gideon Cameron was brave and honest and noble,” Raine agreed. “No one could have asked for a better father. But you and I both know, Aunt Isabel, that your older brother was not the man who sired me.” Raine knelt and reached under her bed to pull out a canvas bag.

“Have you tried asking your mother again?” Aunt Isabel suggested.

Raine gave a soft snort. Every time she’d touched on the subject, Lady Nina had reacted with swift admonishments, scolding Raine for even hinting that Gideon wasn’t her father. Though they loved each other dearly, the matter had caused a feeling of estrangement between mother and daughter.

“What should I say?” Raine asked. “Oh, by the by, Mama, I’m quite certain that you deceived the honorable man you married, and I was the by-blow of that traitorous liaison?”

“Don’t be too harsh in judging your mother, dearest,” Isabel admonished. “We mortals cannot choose with whom we fall in love. Why, even the faery folk show very limited willpower when it comes to their romantic proclivities.”

“Perhaps not. But we can resolve to act with honor and dignity. We’re not chained by our baser inclinations.”

Isabel sank down on the feather mattress, picked up a velvet gown, and started to fold it. Traces of oatmeal rested on her shoulders, sprinkled there to ward off the faeries. Bits and pieces fell on the smooth red velvet. “Where will you begin to look, Raine? Have you had another vision?”

Raine sat back on her heels and closed her eyes. “Not a vision, really. Well, sort of.” Bowing her head, she buried her face in her hands. “I’m not sure what I saw.” She looked up and met her aunt’s worried gaze. “But of one thing, I’m certain. If I don’t go now, ’twill be too late. I’ll never meet my father.”

Isabel nodded in understanding. “You could be heading into danger, child,” she cautioned. “Seeing what’s going to happen in a vision doesn’t mean you can prevent it. Quite the contrary.”

“I’ll be traveling with a group of Poor Clares who leave this morning from St. Margaret’s Nunnery. They’re to set up a hospital in Inverness dedicated to Saint Columba. They’ll carry the saint’s finger bone with them for protection.”

Relief washed over Isabel’s round features. “Still,” she said, “perhaps you should take a strong servant to guard you.”

“The nuns will have a retinue of servants with them,” Raine reassured her. “Should it become necessary, I can hire a bodyguard at Moray Firth, until I can board the ship. But where I’m going, there’s only one man who can protect me.”

Isabel nodded, her hazel eyes filled with compassion. “You speak of Keir MacNeil, of course.”

Raine swallowed painfully. The thought of having to ask the chief of Clan MacNeil for help nearly choked her. “Of course.”

“Well, darling of my heart, if you were a voluptuous female of questionable repute, MacNeil would most likely hasten to your assistance. At the very least, you’d have his complete attention for the space of an evening. But as it is . . .”

There was no need for Lady Isabel to point out the fact that Raine’s figure lacked the curves so admired by the opposite sex. Her aunt raised her brows in calm speculation. “Since the two of you have never gotten along, I have to wonder why you think he’ll agree to help you find the man who sired you.”

“Pooh,” Raine countered. She pursed her lips and scowled. “Who
could
get along with The MacNeil? He’s loud and rough and a a braggart. He’s totally unlike his half brothers, Rory and Lachlan. Besides, the stubborn dolt has no belief whatsoever in magic.”

Raine looked away in an attempt to hide her feelings from her astute aunt. Since the summer she’d turned seventeen, Raine had fought an inexplicable attraction to Keir MacNeil. ’Twas a purely physical attraction. One she was determined to squelch, for the notorious womanizer seduced and discarded mistresses the way other men tossed out their stained shirts.

She rose to her feet and tossed the canvas bag on the bed beside her aunt. “Don’t bother folding that fancy gown, Auntie,” she said with a rueful smile. She bit her lower lip and blinked back the sudden tears that pooled in her eyes. “There won’t be dancing where I’m going. A few plain dresses will have to do.”

“Still,” her aunt said with a loving smile, “a lady should always take a few pretty gowns with her whenever she travels.”

Raine nodded and stuffed the red velvet along with several others into her bag.

“Pray, don’t be afraid, sweetie,” Isabel said in a hushed tone. “I believe ’tis your destiny to discover the identity of your natural father and learn why he left your mother while she carried his bairn. Be brave, niece, and do not falter.”

Raine sat down beside Lady Isabel, who immediately put an arm around her shoulders. “Sometimes,” Raine said,” I think I’m foolish searching for him, when he’s never made any attempt to find me. Perhaps he doesn’t even know I exist. He may deny that I’m his daughter.”

“You will never know the truth,” Isabel said, “unless you’re brave enough to search for the answer.”

It was barely dawn. The faint morning light peeked through the partially drawn curtains. Raine intended to leave the manor grounds before sunrise on the pretense of an early-morning ride. A sinking feeling churned in the pit of her stomach. ’Twas a ride from which she might never return.

She’d be traveling into the center of a storm.

War had come to the Highlands.

Six months before, Donald Dubh, the illegitimate son of Alexander Macdonald, the last high chief of the Isles, had been rescued from imprisonment in the island fortress of Innischonaill. A band of Macdonald clansmen had made their way unobserved through the heart of Campbell country, rowed silently across Loch Awe, rushed the castle, and freed its nineteen-year-old prisoner. He was immediately proclaimed lord of the Isles. The whole of the Hebrides rallied to his cause. Nearly every Macdonald in the Highlands and Isles, and their allies with them, rose up in rebellion against James Stewart.

The king of Scotland had designated Laird Keir MacNeil master and commander of a squadron in the royal fleet. The king had commissioned him to help put down the rebellion. Keir’s stated goal was to capture the traitors and bring them to Edinburgh for trial and hanging. One of those traitors was the man Raine believed to be her natural father, Torcall MacMurchaidh.

She had to reach him before Keir.

“I have something to give you,” Aunt Isabel said with an encouraging smile. She placed a smooth stone which had been chiseled into the shape of a heart in Raine’s palm. Uncounted years before, the stone had been engraved in an ancient language, incomprehensible today to most people. Only those familiar with the riddles and enchantments of the Tuatha De Danann—the faery race—could discern its meaning.

Raine brushed her thumb across the strange symbols. “What does it say?”

“ ’Tis a rune for your safety, my dear. Keep it with you at all times.” Isabel reached down and lifted a richly embroidered purse, filled with coins, off the bedcovers. She pulled the cords loose and dropped a handful more into the bag. “Here’s a few more gold unicorns to take with you, dear heart.”

Raine nodded as she placed the rune carefully inside her purse and fastened it on her girdle. Drawing a deep, steadying breath, she rose from the bed and held out her hands. Her aunt took them in her firm grasp and moved to stand beside Raine.

“When you reach the Isle of Lewis,” her aunt said, “you must go to the stones of wonder at Calanais. I’ve told you much about them, but you should visit the temple to the Mother of the Universe yourself.” Isabel clasped Raine by the shoulders and kissed her forehead. “I, too, have had a vision, my dear. I believe you will remain safe as long as you stay with Keir. ’Twill be very important that you are not separated from him during your journey.”

Raine slowly shook her head. “I don’t think the chief of Clan MacNeil will be agreeable to my hanging on to him like a bawling halflin.”

The picture that came to mind made them both laugh.

Laird Keir MacNeil was the most formidable warrior in the whole of Scotland. And beyond.