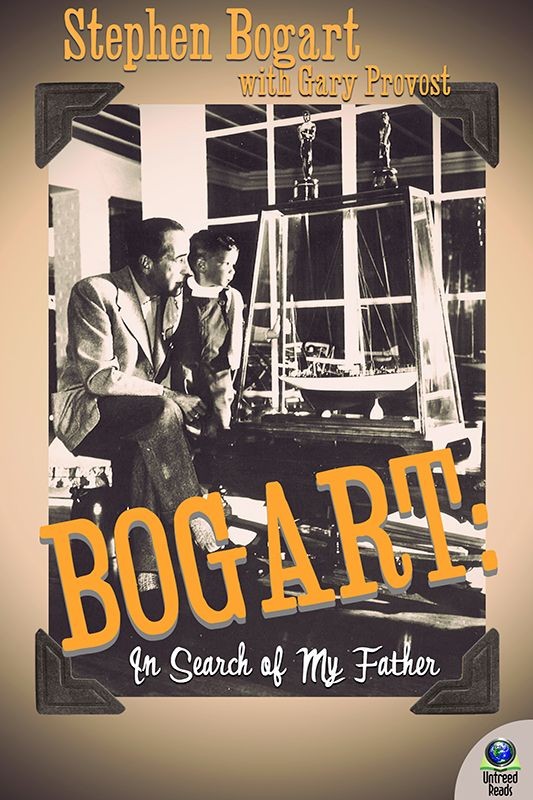 BOGART: In Search of My Father

Bogart: In Search of My Father

By Stephen Bogart with Gary Provost

In Search of My Father

For my father, my three children, Jamie, Richard and Brooke

And in memory of

It is a long road he has travelled since that day on Janu
ary 6, 1949, when Stephen Humphrey Bogart entered the
world. Having firsthand and intimate knowledge of that time,
I would say his first eight years of being Humphrey Bogart’s son were happy years. After that, with the death of his father,
he learned too soon about endings. Growing up as the son of
Humphrey Bogart, with all the curiosity of others that would
bring, and his yearning to somehow emerge with an identity
of his own, was quite a different matter. Having had to cope
with the indescribable pain of loss, the confusion and anger
that accompanies it, the sense of isolation from his two-
parent peers—all throughout his most impressionable, form
ative, and needy years—must have presented obstacles and
miseries beyond comprehension. He did not have the good
fortune of time spent with his father or that most precious
thing—memories—happy memories—to comfort him.

Added to that came the rebirth of Humphrey Bogart;
the discovery of him by new generations elevated Bogie to an
icon, to cult status (a status, incidentally, that now encompasses the world).

But it began while Steve was in his teens.

So it is no surprise that Steve dropped the curtain—not
only to forget the pain of loss—but to try to find a place for
himself.

For many years I have been hoping and praying he
would find a way to come to terms with being his father’s son, would get to know him, and perhaps begin to under
stand the rare qualities that Bogie had as a man—why he rep
resents the kind of character and integrity so hard to find in
today’s world, and why he has become such an important fig
ure to so many.

It cannot have been easy for Steve to face the unearthing
of the past, to face for the first time the reality of his denial,
to face himself. But he has done it. These are his words, his
feelings, his discovery.

Though I cannot say I fully agree with each of his con
clusions, I am happy and proud that he has taken the time
and made this extraordinary effort. I am filled with admira
tion for his accomplishment. And for me, perhaps, what is
most satisfying in these pages is that I think he is now ready to be Humphrey Bogart’s son, with pride, and to pass on all
that he has learned and feels to his children.

I respect him, love him, and am proud to be his mother.
I am thankful that he has opened his heart and mind to what must have been a terribly painful—though I hope enlighten
ing and rewarding—time.

When I was a kid I had it all. Just like Bogie and Bacall.
In fact, I had them, too. Humphrey Bogart and Lauren
Bacall. They were my parents.

In the early 1950s we lived in a beautiful fourteen-room
house at 232 South Mapleton Drive in Holmby Hills, which is a pricey little slice of real estate between Bel Air and Beverly
Hills. It was a great house, two stories of whitewashed brick,
hidden from the street by hedges and trees. At the entrance
to the driveway there was a two-foot brick wall. On it my fa
ther had hung a sign: DANGER, CHILDREN AT PLAY.

For years the house was only partially furnished. The liv
ing room, especially, always looked incomplete, as if the
family had just moved in. I’m not sure why, exactly. I think it
was because my mother had promised Dad that if he came
up with the money for the house she would furnish it slowly.
Dad really wasn’t interested in having a big house. He was
the kind of guy who could be happy with two rooms, as long
as one of them had a bar in it.

We also had a tennis court, a four-car garage, a lanai
with wrought-iron tables and chairs, and an expansive lawn
where my little sister, Leslie, and I used to do somersaults
and play on the jungle gym that my father had bought us. After we moved in, Mother installed a swimming pool, where even today you can see the footprints that Leslie and I left in
the concrete.

Along with the two movie stars and the two kids, there
were three dogs named Harvey, Baby, and George. To serve
us all there was a maid, a butler, a gardener, and a cook.
Just as well. My mother was no cook, and my father was
no handyman.

I must have thought that everybody lived this way. Sybil
Christopher, who was Mrs. Richard Burton when I was a kid,
says she took me to see
Hans Christian Andersen
when I was six
years old and she remembers that when we walked up to the
balcony of one of the huge old opulent movie theaters in Los
Angeles, I asked her, “Whose house is this?”

The early fifties were an idyllic time and I have many
fond memories of Mapleton Drive. But when I think of the
house, I think, too, of my greatest regret, the fact that I had
so little time there with my father. It is a regret made more
poignant in recent years by the fact that I ignored his mem
ory for most of my life. I resented Humphrey Bogart for rea
sons I only now understand, and for almost four decades I avoided learning about him, talking about him, and thinking
about him. It was only with the marriage to my second wife,
Barbara, in 1984, and with the birth of our two children, Richard and Brooke, that I began to pull from my shoulder
a chip the size of Idaho that had been there since the death
of my dad when I was eight.

I think in the early days of our marriage Barbara was
shocked when she began to realize that I knew less about my
father than many of his fans. Here I was, telling my new wife
that the most important thing to me was family, and I
couldn’t even score well on a Bogie trivia test at the back of
a magazine.

It’s not as though nobody had ever urged me to find out about my father. Mother had been doing it for years. But you
know how it is when your mother tells you that you should do
something. It’s practically a guarantee that you won’t do it.

I might have gone on forever, fleeing my father’s ghost
at every turn. But Barbara wouldn’t let me. She understood
how I was feeling about it, understood certainly better than I
did, and she didn’t try to change my feelings. She simply
showed me how important it was to know who my father was
if I really wanted to understand who I was. She let me see
that just because I didn’t want to glorify my father, that didn’t
mean I had to ignore him.

“Find out about your father,” she said. “Talk to your
mother. Talk to his friends. I want our children to know
about their grandfather.”

And so I began to read about my father. I delved, reluc
tantly at first, back into my memories of him. And I visited
people who knew him. I talked to people he did business
with, like Sam Jaffe, his agent, and Jess Morgan, one of his
business managers. I talked to people who had played in
movies with him, like Katharine Hepburn and Rod Steiger. I
talked to some of his writer friends, like Alistair Cooke and
Art Buchwald. And I talked to family friends, like Carolyn
Morris, and people who had known him briefly, like Domi
nick Dunne, and friends who had written about him, like
Joe Hyams.

Perhaps if I were not Humphrey Bogart’s son, but just
some guy writing about Bogie, I would have spent more time
with Lauren Bacall than with anyone else. But she’s my
mother. I already know her opinions on the subject. She
helped me a great deal, but ultimately she wanted me to do
this without having her as a crutch. But I think Mom is
pleased. My father has become a character of folklore, and
there are so many contradictory stories about him, that I
needed to hear what a lot more people other than my
mother had to say. Also, Bogart lived more than three-
quarters of his life before he met Bacall. So if there are mis
takes in this book, and I’m sure there are, don’t blame Mom.

And don’t blame the other people I spoke to. It is the
nature of a legend like Bogie that the stories about him get
embellished, relocated, even folded in with other stories. The
precise truth is always elusive. But there are many people
who took the time to tell me the truth about my father as they knew it, and I want to thank them:

I want to thank, too, the many celebrities and writers
whose written words have led me to greater knowledge of my
father. Special thanks go to Joe Hyams for
Bogie
and Nate
Benchley for
Humphrey Bogart.
Thanks go also to Katharine
Hepburn for
The Making of
The
African Queen, Janet Leigh
for
There Really Was A Hollywood,
Richard Schickel for
Legends:
Humphrey Bogart,
Melvyn Bragg and Sally Burton for
Richard Burton: A Life, 1925–1984,
John Huston for
An Open Book,
Gerold Frank for
Judy,
Bob Thomas for
Golden Boy,
Charles
Higham for
Audrey: The Life of Audrey Hepburn,
Vera
Thompson for
Bogie and Me,
Edward G. Robinson for
All My Yesterdays,
and Lawrence J. Quirk for
The Passionate Life of Bette Davis.

Road to Glory by Tessa Berkley
The Romulus Equation by Darren Craske
The Lizard Cage by Connelly, Karen
Last Known Victim by Erica Spindler
Insecure in Love: How Anxious Attachment Can Make You Feel Jealous, Needy, and Worried and What You Can Do About It by Leslie Becker-Phelps
A Secret Gift by Ted Gup
I Want to Kill the Dog by Cohen, Richard M.
Peeling the Onion by Wendy Orr
The Dead Lie Down by Sophie Hannah
The Senator: A Blake Jordan Thriller by Ken Fite