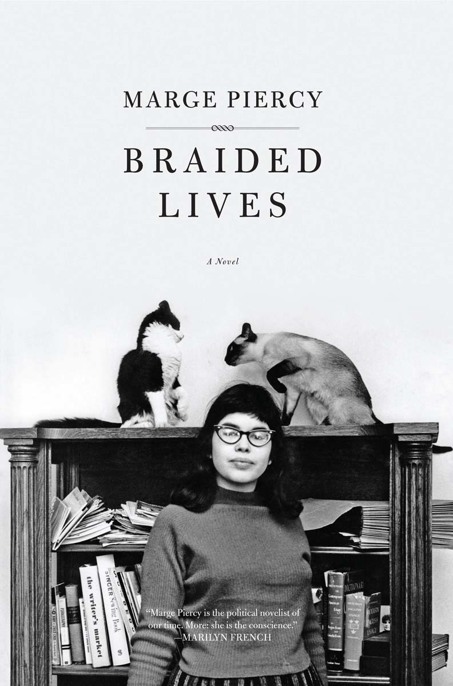 “This book demonstrates the maturation of Piercy’s native talent for storytelling … we would have to look to a French writer like Colette or to American writers of another generation, like May Sarton, to find anyone who writes as tenderly as Piercy about life’s redeeming pleasures—sex, of course, but also the joys of good food, good conversation, and the reassuring little rituals like feeding the cats, watering the plant, weeding the garden.”

“A delicious binge of a book. I had a wonderful time reading
Braided Lives,
crying real tears at the sad parts and feeling real elation at the happy ones.”

“This big, rich book has an authenticity of time and place that draws us into the story. The theme. That sex without birth control and abortion without legal protection cost lives. Piercy handles her theme deftly, so the lives of her characters and not the rhetoric of the author make us keep reading.
Braided Lives
is a novel that tries not to simplify but to clarify … and by so doing, it adds a great deal to our understanding of how things came to be as they are, and what some of yesterday might have meant.”

“Marge Piercy is
the
political novelist of our time. More: she is the conscience.”

“A magnificent achievement. With beauty and mastery, she palpably creates, recreates a decade.
Braided Lives
is one of those rare, rich, valuable books that reveal how realities, class, sex, one’s times—shape generations.”

“Absorbing. Marge Piercy recreates the college campus of the fifties with all the desire, confusion, hypocrisy, and pain of young women’s emerging sexuality.”

Other books by Marge Piercy

Colors Passing Through Us

The Art of Blessing the Day

What Are Big Girls Made Of?

Mars and Her Children

Circles on the Water

The Moon Is Always Female

Living in the Open

To Be of Use

Woman on the Edge of Time

Dance the Eagle to Sleep

City of Darkness, City of Light

The Longings of Women

He, She and It

The High Cost of Living

Pesach for the Rest of Us

So You Want to Write (with Ira Wood)

The Last White Class: A Play (with Ira Wood)

Sleeping with Cats: A Memoir

Parti-Colored Blocks for a Quilt: Essays

This novel is a work of fiction. Names, characters, places and incidents are either the product of the author’s imagination or are used fictitiously. Any resemblance to actual events or locales or persons, living or dead, is entirely coincidental.

All rights reserved. No part of this book may be transmitted by any means without permission in writing from the publisher

Grateful acknowledgment is made to the following magazines, where excerpts of
Braided Lives
previously appeared:

Earlier short stories incorporated into
Braided Lives
were published in:

One of the poems in
Braided Lives
was included in
4-Telling,
Trumansburg, NY: The Crossing Press, 1971.

Printed in the USA, by the Employee Owners of

F
OR ALL THOSE WOMEN WHO BUSSED TO STATE LEGISLATURES TO HARANGUE REPRESENTATIVES, MARCHED IN THE STREETS, TOOK WOMEN TO DOCTORS WHO WOULD HELP OR DID THE ABORTIONS THEMSELVES UNTIL THEY GOT SOME PART OF WHAT WOMEN NEEDED.

I
T IS UNFORTUNATE
that
Braided Lives
is so timely, since women’s hard-won rights are under vicious attack from the Right and from fundamentalists, from Congress and from state legislatures. It would be nicer if we could read this novel as historical fiction, but we are undergoing a powerfully funded attempt to roll back history. We are witnessing men who fantasize a return to the conditions of the fifties, plotting so that era’s constraints can return and women once again find their sexuality and fertility completely out of their control.

The television program
Mad Men
has made vivid to viewers some of the enforced sexual roles of that time. Unfortunately, television makes pretty what was far from it. That era was far more bloody than cute.

Most of you who will read this novel have never lived in a world before
Roe v. Wade
made abortion legal (if not affordable or procurable) for a lot of women. In
Braided Lives,
you enter a world that may be as strange and barbaric to you as the world in historical novels like my own
City of Darkness, City of Light,
in which an apprentice is hanged by the neck until dead for stealing a loaf of bread. Women of that time lived with a fear that may be hard for us to understand: that desire or even true love could kill; that to become pregnant when you do not want to is to enter a world of illegality and danger, of uncertainty and pain.

In a world before
Roe v. Wade,
women faced the experience of forced motherhood, of signing babies away, of abortions carried out without anesthetics. There was also a very real fear of bringing shame on your family, of losing your scholarship or job, of being forced to drop out of school and perhaps not being able to return, of ruining your relationships, of arrest and imprisonment, of accidental sterility, of infection and pain, of death. Even after death, the shame would continue. Dying of an abortion was not at all uncommon, but usually covered up. Such a death would be a newspaper scandal if revealed, so it would be concealed if the family were able to persuade the doctor to fudge the cause of death (“her heart stopped”). When abortion was illegal, an estimated 40 percent of maternal deaths were from botched abortions or self-inflicted abortions. You could die a great many ways then: of bleeding to death, of septicemia, of tetanus.

Braided Lives
revolves around the friendship of two women in and after college. The main protagonist, Jill, is the closest I have ever come to basing any fictional character on myself, and this is one of the few times I’ve written fiction in the first person. It was a tremendous loosening and, to this day, I love the style of this book. Of any prose I’ve written, I think it’s closest to the way I think and speak, except for my poetry. It is not a truly autobiographical novel, although some episodes are similar to or the same as what I’ve done and gone through in my own life. If you read my memoir
Sleeping with Cats,
you can tell the difference.
Braided Lives
is more of a large, intricate structure built on events of those years, some of which are drawn from lives far different than my own.

At the core of this novel is what young women’s lives were like when they were forbidden to have sex outside marriage, although probably a majority of them did so anyhow. It depicts what it was like when contraception for unmarried women was as difficult to come by as the Republicans would like to make it today. It tells what happened to women when abortion was illegal and anticipates how women—yes, women, not politicians, not the Supreme Court—forced the issue until they had gained control over their own fertility.

The two main characters in this book come from Michigan’s industrial working class: Jill from Detroit, Donna from Flint. Jill is Jewish, although mostly in a cultural sense. Donna was raised Catholic. Both struggle with their sexual identities, their ambitions, and their relationships with men—in one case the same rich, cold, manipulative Freudian, Peter, who pits them against each other and almost destroys their friendship.

The novel is full of the cultural wars of the fifties; the incipient, mostly underground, political ferment that led to the sixties; the rebellion of women against the rigid sex roles (and the equally rigid clothing and undergarments that fill some aging men with desperate nostalgia) that emerged later in the women’s movement; and the desire for something other than the conventional straitjackets of marriage that ruled those times. It centers on what it was like to be a woman when the men who hate female sexuality had full control of the laws and the medical establishment and the work and social options available to a girl coming of age.

Braided Lives
is also full of vividly created characters: Jill, dark and street-smart, falls in love easily until it almost kills her. Jill is seeking to find her way as a poet, seeking a way to be authentic in her relationships. A bit of a thief and an adventurer, inchoately political, she is a survivor who compares herself to an alley cat. Donna—a fragile, pretty blond—hopes to find security and fulfillment through men, while compulsively using sex as obliteration. Mike, Jill’s first adult relationship, is a follower of Ezra Pound and D.H. Lawrence—a heady mental cocktail of the era—who tries to dominate and control Jill absolutely. Howie is Jill’s friend from high school and emerges as her strongest relationship and most powerful lover, but he is also the same for Stephanie, the flirtatious coquette who believes that a set of rules will guarantee success in the game of love that she plays using perennially renewable virginity.