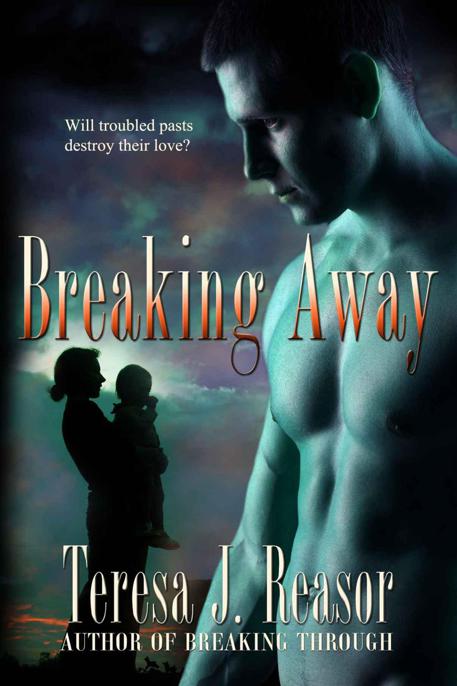 BOOK 3 OF THE SEAL TEAM HEARTBREAKERS

To all the families of our men and women at arms, thank you for your many sacrifices. Without you standing firm and keeping the home fires burning, they could not do the job they do. God Bless you.

And to the Lethal Ladies. You are the bomb!

This is a work of fiction. Names, characters, places and incidents are the product of the author’s imagination or are used fictitiously, and any resemblance to actual persons living or dead, business establishments, events, or locales is entirely coincidental.

All rights reserved. No part of this book may be used or reproduced in any manner whatsoever without written permission from the author, except in the case of brief quotations embodied in critical articles or reviews.

Part One:
Going It Alone

Other Books by Teresa Reasor

Connect with Teresa on Substance B

Breaking Away came to me as two separate stories, and is told in that way for the first third of the book. I wanted you, dear Reader, to know the
whole
story of what had happened to Lieutenant Junior Grade Harold Timothy Carney, better known as
Flash
to his team members, and to the readers of the first two SEAL Team Heartbreakers books, who have patiently waited for his story.

And I felt it important for you to know how Samantha came to be where she needed to be, physically and emotionally, so she could find her way into Flash’s arms and heart.

Most books will begin in the middle of the action, or the mid point instead of the beginning. But that would have left many questions about Flash and Samantha’s circumstances and meant a great deal of backstory would have cluttered up the story. So, I’ve broken a
romance
rule and given you Flash and Samantha’s
whole
story, in the order it happened, just as it unfolded to me.

I hope you enjoy
Breaking Away
.

PART ONE
OF
BREAKING AWAY

L
ieutenant Junior Grade Harold ‘Flash’ Carney sighted, one by one, the four tangos on the adjoining roof through the thermal scope of his MK-11 sniper rifle. Each sentry guarded a corner of the building, making it damn hard for his guys to slip inside. With the suppressor on his rifle to muffle the report, he could take out two, maybe three of the guards, but the fourth might just make it down the stairs to warn the fuckers below of his team’s presence. He’d have to wait
. Shit!

Despite the chill in the Iraqi night air, sweat ran along his spine beneath his body armor. He ignored it. Every breath tasted like dust, as though the sun had scorched the earth earlier in the day and kicked ash into the air. He suppressed the urge to spit and, with a grimace, swallowed.

Hawk’s signal on the com system clicked in his ear. He was already inside the building and in position. Good.

A man slithered up to a window on the back side of the structure, cut a hole in the glass, then reached through to unlock and raise the pane. He slid inside soundlessly and signaled. It was Bowie. Another man followed close behind him. Doc. A few minutes later more clicks sounded. Strong Man and Cutter.

And now Flash waited, keeping the four tangos in his sights. The lull gave him too much time to think about the visitors he’d met with back at the base. Cutter was on his ass to tell him what was going on, but he couldn’t. They’d ordered him to keep this secret. Their reason—members of his team could be involved in something illegal.

That was bullshit. He knew these guys. He’d place his life in any of their hands without a second thought.

Zach “Doc” O’Connor was one of the best medics in the teams, and had risked his life more times than Flash could count to recover the wounded and keep them alive. No way would he to even think of doing anything as dishonorable as smuggling.

Other than fishing and women, Dan “Bowie” Rivera didn’t spend any money and had no financial woes. So, no reason to smuggle.

Oliver “Greenback” Shaker, the only married member, wouldn’t do anything that would take him away from his wife and new baby.

Flash had discovered by accident an assault charge against Derrick “Strong Man” Armstrong had been dropped a few months before their deployment. Could someone be blackmailing him into smuggling for them? Flash couldn’t see it. With Strong Man’s anger issues, they wouldn’t last long enough to compromise him. He’d pound them into the ground.

Brett “Cutter” Weaver was the counselor of the group. If anyone had a problem, they’d be dishing to him. In fact he’d gotten the impression Strong Man had been doing just that on the helo before the drop. He’d talk to Cutter and see if together they could figure out what was going on with Strong Man. Just in case. He’d have to be slick about it. Cutter was a vault when someone confided in him. Which was why the guys used him as a sounding board.

As he maintained a watch on the rooftop tangos and the street below, Flash resisted the urge to wipe the trail of sweat that streaked down his cheek from beneath his Boonie hat. He could understand why NCIS had approached him about this assignment. He knew all the guys in the company well, and he had gambling issues. When he was flush he was flush. And when he was down…

It made sense to choose the one team member with a history of financial ups and downs, with a history of gambling, for this undercover assignment. His apparent addiction left the impression that he could be compromised. The thought twisted his gut with anger and pain. He wasn’t addicted to gambling. He used his trips to Vegas to supplement his income, but he wasn’t addicted.

Hawk’s clicks sounded over the com, jerking Flash out of his reverie. The prearranged signal notified everyone on the team he’d finished placing his charges and exited the building. Strong Man’s clicks sounded soon after. Flash’s attention jumped briefly to the men on the roof, then dropped again to watch the movement on the street below. He spied Doc and Bowie through the thermal scope, as they crawled out through the same window they’d entered. Their identities were verified by their clicks moments later. Where the hell was Cutter?

Minutes crept by. His muscles tightened with tension. The timers connected to the C-4 were running. They needed to get the fuck out of here. Why hadn’t Cutter checked in?

For a moment those words clanged through Flash’s head like alarm bells.

Derrick cut through his reaction with, “C’s a no show, over.”

How the hell could Strong Man sound so fucking calm?

“Cutter, come in, over.” Hawk’s voice, holding much the same even tone, was met with silence.

Flash took a deep breath and homed in on one of the sentries. Had Cutter been attacked inside? Captured? No. These terrorist assholes would be going ape shit if they’d discovered him. Something else was going on. Could Cutter’s com system have screwed up?

“Ground floor. I thought he was right behind me,” Derrick replied.

Why the fuck had they opted to go old school with the explosives?

Because the structure of the buildings made a remote receiver unreliable. And they’d wanted to be far, far away before it went off.

Shit! Flash mouthed the word. His heartbeat cranked up, pounding in his throat, his temples.

He checked the location of the rooftop sentries.

Minutes ticked by like hours. One of the sentries called down to someone on the street and Flash eased the rifle barrel in that direction. The man on the street answered and slipped inside.

Movement to the right caught Flash’s attention and he turned just as a man slithered into the window Bowie and Doc had exited through before. The man’s Boonie hat fell off and landed on the ground beneath the window. Who the hell was it? Flash’s thermal imager only showed the man in white, without any identifying details.

Shit! Three members of the team were inside a building rigged to explode in three minutes.
Jesus!

And he was sitting up here, unable to do a damn thing to help.

The sound of an MP-5 submachine gun came from inside the building, and two of the armed sentries ran toward the rooftop door. Flash sighted the lead runner and took him down. The second man paused just long enough for Flash to pick him off, too.

The other sentries took up a position at the front of the building. All hell broke loose down on the street as his team fired, lighting up their positions. The two sentries dropped behind the low brick wall bordering the roof.