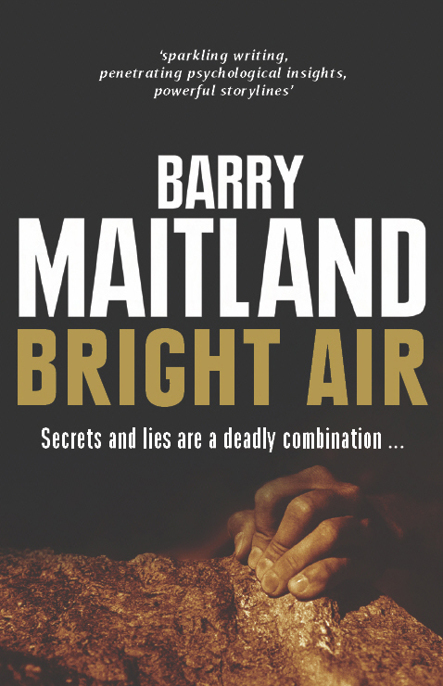 “Maitland offers his readers a gripping drama … It’s a mark of his skill as a crime writer that we leave the book wiser, more knowledgeable about the natural world, as well as deftly entertained.’
—
Weekend Australian

‘… will entertain those after an intelligent, realistic crime novel.’
—
Canberra Times

‘Consummate powers of description distinguish Maitland’s thriller from the pack as he takes a break from his British police procedural series for an ambitious exploration of loyalty, betrayal, loss of innocence and guilt.’
—
The Advertiser

‘… a compelling story in an original setting you won’t want to miss.’
—
Woman’s Day

‘… disarms criticism with his sparkling writing, penetrating psychological insights and powerful story-lines. Maitland also ruminates about risk and contingency, and there are curious parallels with Tim Winton’s
Breath
in the exploration of extreme demands on physical and moral courage.’
—
The Monthly

Cataloguing-in-Publication details are available
from the National Library of Australia
www.librariesaustralia.nla.gov.au

And with many thanks to Annette, Angela, Ali, Kirsten
and Lyn for their invaluable advice, and to Tim
for sorting my Jumars from my prusiks

Heart hammering, she leaped up onto the ridge and began to run. The rock was fractured, treacherous, and her flailing feet sent stones skittering down the steep slopes on either side, from which flocks of seabirds rose protesting into the air, swooping and squealing. The equipment attached to her harness chinked and banged against her thighs as she ran, threatening to make her stumble. From behind and below she heard the shouts of her pursuers, calling her name, pleading with her to stop, but rage and fear drove her on. How could they have done this? She thought she heard one of them cry out in panic, as if falling, and she half turned her head to see, missing her step in the process. She scrambled for a handhold as her feet slid out from under her and she found herself hanging from the rock face. Looking down she saw the huge breakers crashing into the base of the cliff, a hundred metres below.

Love casts a strange light over everything. I recall the moment precisely, as if watching a loop of dazzling film played at half speed.

Through the French windows I can see one of our regular guests, Justice Rory McGregor of the Supreme Court, sitting on the terrace with a fat document on his knees. It is a late Sunday afternoon in August, the last weekend of winter, and a warm breeze has tantalised all day with its heartachey smells of jasmine and pittosporum blossom. The low western sunlight flickers through the angel’s trumpet tree above the judge, who sips from a cup of tea. I have the impression that he is having difficulty concentrating on his papers, for he’s staring down over the rooftops to Rushcutters Bay, glittering with sailing boats being readied for spring.

My Aunt Mary has gone to her bridge club leaving me in charge, and I am in the dining room, setting the tables for the next day’s breakfast and thinking how odd it is that I should find such a routine chore so comforting, like placing the pieces for a game of chess—cup, saucer, plate, knife, fork, spoon—in which no unexpected moves are permitted. This place—Mary’s little hotel—is a refuge, an old house screened by thick foliage from the tower apartment blocks that have grown up around it, a place of quiet predictability, of shady nooks and heavy dark timbers sheltering beneath a spreading orange tile roof. I have returned to the land of cosy
abbreviations—the garbo, the ambo and the firey—and I just want to sink into it and disappear.

The reception bell sounds from the hall and I put down the cutlery to go and see, and there, standing at the counter, is Anna.

The sight of her jolted me, an Alice-in-Wonderland moment, as if I might be drawn back down some long vertiginous tunnel to the past. She wasn’t aware of me and I was tempted to step silently back behind the shelter of the dining-room door, but that would have been absurd.

She spun around, the smile forming immediately on her lips, not at all surprised to hear my voice. Clearly she had expected to find me here.

As she came towards me I was momentarily at a loss, not sure how to greet her. We were old friends, but time and circumstances had formed a yawning gap, and though it was only four years since we’d last met, we both hesitated to cross it. She reached out and held me at arm’s length for a moment, examining me, then ducked her face forward to kiss my cheek. I held her for a moment, feeling a little surge of affection alongside the foreboding.

‘You’ve changed, Josh,’ she said. Her smile was genuinely warm, that familiar ironic grin threatening to break into a laugh of pleasure at seeing me, and I felt ashamed that my initial reaction had been to run.

‘Mm.’ Her head cocked to the left. ‘You look more serious, a man of the world.’

‘It’s good to see you again, Anna. Is this a chance visit?’

‘I heard you were coming back.’

‘Really?’ That surprised me. ‘How was that?’

‘I ran into your aunt in town a month ago. Didn’t she tell you? She said you were coming home. Is it for good, or just a visit?’

We settled ourselves in the comfortable armchairs by the windows of the empty lounge. I’d been back ten days, but the place still had an air of unreality about it, as if I might jerk awake at any moment and find myself in a crowded tube train. I relished the abstraction of it, the invisibility of the stranger, knowing that it wouldn’t last, especially now that Anna had come.

The smile faded from her face, and without that sparkle I realised how much she, too, had changed. She’d lost weight, and her features seemed to have become a little harder and, in the process, to have developed more character. There was a small scar on her temple that I was sure hadn’t been there before, and shadows around her eyes, and I wondered if she might have been ill. Certainly she was much better groomed than in the old days, in a smart blouse and skirt, her face neatly framed by an immaculate helmet of black hair.

She turned to me with a serious look, as if trying to read something from my expression, and I felt a need to say something innocuous to head her off. ‘That’s our judge.’ I nodded at the figure through the window, now in murmured conversation with Socrates, Mary’s labrador, sprawled at his feet. ‘Justice McGregor. He’s due to hand down sentence tomorrow on the man who murdered those two women on the train.’

‘Oh, that case. How terrible. He looks as if he’s discussing it with the dog.’

‘Could be. They have a lot in common. The same sense of humour, for instance—the judge likes to hide the dog’s rubber bone, while Socrates steals his gloves. And though the judge spends his time wrestling with complex moral issues while Socrates can’t spell cat, I’m not sure that there’s such a fundamental difference between them, actually.’ I stopped abruptly, realising that of course it was Luce who’d taught me to think like that.

I shrugged. ‘Cheers. So what are you up to these days, Anna?’

She was a manager at an aged-care nursing home out at Blacktown, she said. I found it hard to imagine this. The four-year gap was shrinking again while we talked, the physical differences fading as I tuned in to the Anna I’d last known, a 22-year-old student.

‘Must be a responsible job, I suppose?’

‘Fairly.’ She frowned, creases forming between her dark eyebrows. ‘They … need a lot of help, our clients.’ The way she said it sounded almost like a penance. ‘And how about you? How was London?’

I took a deep breath and did my best to be entertaining without going into too much detail. ‘It got pretty intensive towards the end,’ I concluded. ‘Good money, you know, but pressure, and hellish hours. After four years I felt I needed to come back, at least for a while.’ I thought I sounded reasonably plausible, becoming a better liar with practice.

‘Well, you’ve had lots of responsibility too. Can I have some more wine?’

It suddenly occurred to me that she was anxious, hesitant about bringing something up, and I thought I knew what it
was, the same unspoken thing that had been preoccupying me ever since I’d first caught sight of her.

I stood up to fill her glass, and then, as if it had just occurred to me, said, ‘You know, I was devastated not to make it back for Luce’s service. There was a mix-up with your message—I’d moved to a new address and by the time it reached me the date had passed and there didn’t seem any point in flying back. I’m sorry. It must have been terrible.’ I realised I was asking her to forgive me.

‘Yes,’ she said simply. ‘It was.’ I gathered that not only was she not going to make it easy for me, but that this wasn’t what she’d come about.

‘Her father took it hard, I suppose.’

‘I don’t think he replied to anyone.’

Outcast by Erin Hunter
Kiss of an Angel by Janelle Denison
Men in Miami Hotels by Charlie Smith
An Iron Rose by Peter Temple
KanesBounty by A.S. Fenichel
Shadow Baby by McGhee, Alison
The Star of Lancaster by Jean Plaidy
The Maze - the Lost Labyrinth by Jason Brannon
Identity Crisis by Melissa Schorr
Mama Black Widow by Iceberg Slim