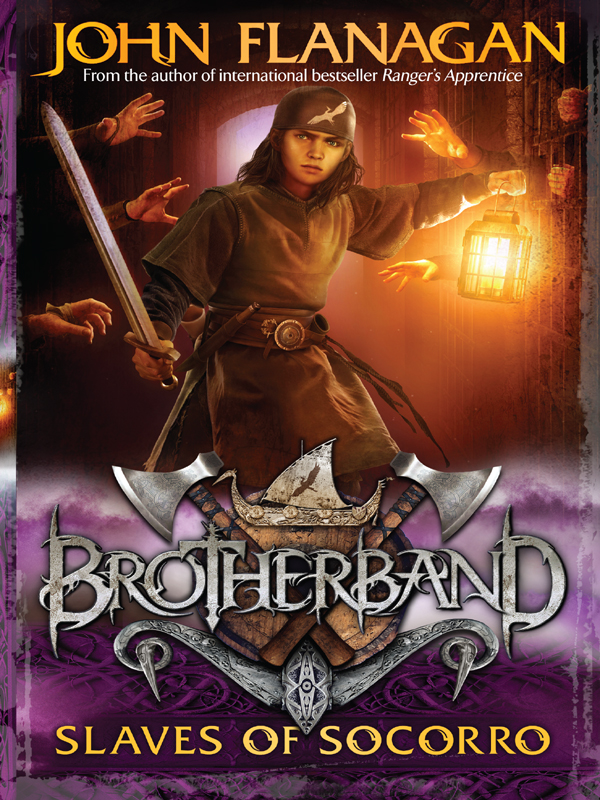 When the Heron brotherband become the Skandian duty ship to the Kingdom of Araluen, they’re excited at the challenges ahead. Hal, Stig, Thorn and the Herons eagerly set off for the trip – with an unexpected new crew member aboard.

But an enemy from their past returns, throwing the Herons into a dangerous quest to free captured Araluans from the slave market in Socorro. Even with the help of an Araluan Ranger, the task may be too much.

Return to the seafaring world of Hal and his intrepid ship’s crew in the fourth book of John Flanagan’s epic Brotherband series.

Go Back to Where It All Began

B
ecause this book involves sailing ships, I thought it might be useful to explain a few of the nautical terms that are to be found in the story.

Be reassured that I haven’t gone overboard (to keep up the nautical allusion) with technical details in the book, and even if you’re not familiar with sailing, I’m sure you’ll understand what’s going on. But a certain amount of sailing terminology is necessary for the story to feel realistic.

So, here we go, in no particular order.

Bow:
The front of the ship, also called the
prow
.

Stern:
The rear of the ship.

Port and starboard:
The left and right sides of the ship, as you’re facing the bow. In fact, I’m probably incorrect in using the term ‘port’. The early term for port was ‘larboard’, but I thought we’d all get confused if I used that.

Starboard was a corruption of ‘steering board’ (or steering side). The steering oar was always placed on the right-hand side of the ship.

Consequently, when a ship came into port it would moor with the left side against the jetty, to avoid damage to the steering oar. One theory says the word derived from the ship’s being in port – left side to the jetty. I suspect, however, that it might have come from the fact that the entry port, by which crew and passengers boarded, was also always on the left side.

How do you remember which side is which? Easy. Port and left both have four letters.

Forward:
Towards the bow.

Aft:
Towards the stern.

Fore and aft rig:
A sail plan where the sail is in line with the hull of the ship.

Hull:
The body of the ship.

Keel:
The spine of the ship.

Steering oar:
The blade used to control the ship’s direction, mounted on the starboard side of the ship, at the stern.

Tiller:
The handle for the steering oar.

Beam:
The side of the ship. If the wind is abeam, it is coming from the side, at a right angle to the ship’s keel.

Yardarm or yard:
A spar (wooden pole) that is hoisted up the mast, carrying the sail.

Masthead:
The top of the mast.

Bulwark:
The part of the ship’s side above the deck.

Gunwale:
The upper part of the ship’s rail.

Oarlock or rowlock:
The pegs that hold the oar in place.

Telltale:
A pennant that indicates the wind’s direction.

Tacking:
To tack is to change direction from one side to the other, passing through the eye of the wind.

If the wind is from the north and you want to sail north-east, you would perform one tack so that you were heading north-east, and you could continue to sail on that tack for as long as you needed to.

However, if the wind is from the north and you want to sail due north, you would have to do so in a series of short tacks, going back and forth on a zig-zag course, crossing through the wind each time, and slowly making ground to the north. This is a process known as
beating
into the wind.

Wearing:
When a ship tacks, it turns
into
the wind to change direction. When it wears, it turns
away
from the wind, travelling in a much larger arc, with the wind in the sail, driving the ship around throughout the manoeuvre. This was a safer way of changing direction for wolfships.

Reach or reaching:
When the wind is from the side of the ship, the ship is sailing on a reach, or reaching.

Running:
When the wind is from the stern, the ship is running. So would you if the wind was strong enough.

Reef:
To gather in part of the sail and bundle it against the yardarm to reduce the sail area. This is done in high winds to protect the sail and mast.

Trim:
To adjust the sail to the most efficient angle.

Halyard:
A rope used to haul the yard up the mast (haul-yard, get it?).

Stay:
A heavy rope that supports the mast. The
backstay
and
forestay
are heavy ropes running from the top of the mast to the stern and bow (it’s pretty obvious which is which).

Sheets and shrouds:
A lot of people think these are sails, which is a logical assumption. But in fact, they’re ropes. Shrouds are thick ropes that run from the top of the mast to the side of the ship, supporting the mast. Sheets are the ropes used to control or trim the sail – to haul it in and out according to the wind strength and direction. In an emergency, the order might be given to ‘let fly the sheets!’. The sheets would be released, letting the sail loose and bringing the ship to a halt. (If
you
were to let fly the sheets, you’d probably fall out of bed.)

Way:
The motion of the ship. If a ship is under way, it is moving. If it is making leeway, the wind is blowing it downwind so it loses ground.

Back water:
To row a reverse stroke.

So, now you know all you need to know about sailing terms, welcome aboard the world of
Brotherband
!

Dreamology by Lucy Keating
TAKING THE FALL - the Complete Series by Alexa Riley
Sliding Into Second by Ella Jade
Top O' the Mournin' by Maddy Hunter
A Hunter By Any Name by Wireman, Sheila
Through the Storm by Maureen Lee
Riptide Love ( by Melissa Lopez
Romancing the Pirate 01.5 - Beneath The Water's Edge by Jennifer Bray-Weber
Blood In The Stars by Jennifer Shea
Faith and Love Found by Claudia Hope