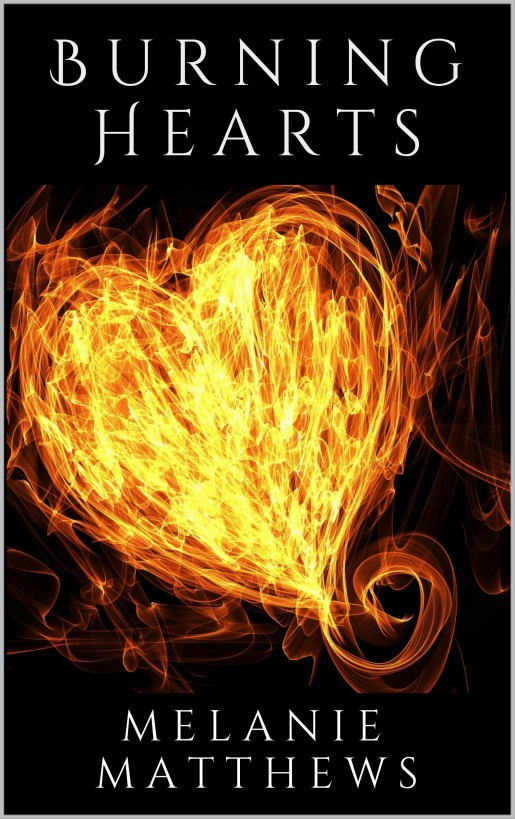 Thank you for downloading this ebook. This book
remains the copyrighted property of the author, and may not be
redistributed to others for commercial or non-commercial purposes.
If you enjoyed this book, please encourage your friends to download
their own copy from their favorite authorized retailer. Thank you
for your support.

Burning Hearts is a work of fiction.

Any references to historical events, real people, or
real places are used fictitiously. Other names, characters, places,
and events are products of the author's imagination, and any
resemblance to actual events or places or persons, living or dead,
is entirely coincidental.

Jenna Love, a seventeen-year-old who’s the target of
nasty rumors and insults by her former beau and friends, finds out
there are far worse baddies in the world. They’re the Jinn, proud
members of Team Evil. And Jenna’s the lucky gal chosen for demon
disposal, burning them to ashes. So it makes perfect sense for her
to fall in love with one, right?

Malcolm King, a half-human, half-Jinni from Egypt, is
different. Seeking to start a new life in Oasis, Arizona, he acts
more like an angel than a demon, keeping his bad half under lock
and key. Jenna’s off the hook from killing him, which is great
because he’s the best boyfriend she’s ever had.

So what could go wrong? Oh, how about the arrival of
Malcolm’s ex-girlfriend, a demon with abandonment issues? With her
crafty ways, she’s trying to lure him back. Half-human, he’s
susceptible to her suggestion; half-demon, his dark side yearns to
be reunited with hers. Jenna knows she’s up against a powerful
rival, but she won’t back down until the demon ex is in her line of
fire.

21 THE DEVIL COULDN’T MAKE
IT

23 THE END AND THE
BEGINNING

He doesn’t want to
die.

Too bad he doesn’t have a
choice in the matter.

The slayer raises her knife.
His fiery eyes burn with fear and hatred, staring at his
executioner, gripping the instrument of his ruin. They move at the
same time: his arm shooting up to block her attack, while she
thrusts the bronze blade toward his heart. She’s quicker. The knife
goes deep, down to the cedar hilt. He screams. She twists the
blade, and he screams again. Then she wrenches it free,
blood-soaked, and watches as he burns from the inside out, the
roaring flames muffling his whimpers.

Death finally arrives,
reducing him to a pile of ashes.

There’ll be no place of rest
for him. No urn. No marker. No stone with engraved identification.
He doesn’t deserve to be remembered, to be mourned.

She takes her shoe and
desecrates his remains, smearing his ashes into the dirt. And then
she walks away, head held high, eyes on the horizon.

Jenna Love has no doubt that
she’s a hero.

No wait, she was wrong.

Jenna knew that vile, deceptive voice. She
could pick out his nails-on-a-scratchboard tone from a crowd of
thousands.

Well, he didn’t sound that bad, but it was
only proper for a girl who’d been dumped to think her ex-boyfriend
was the scum of the earth.

Jenna had been in a trance during the middle
of class, thinking about killing. It’d happened once that morning
while she was eating breakfast at home. Well, tried to eat. The
daydream or waking nightmare was so terrifying that she’d puked up
all her cereal.

And it’d happened again during Mr. Orin
Graves’ senior history class—but thankfully without the puking
part. The students were in groups of four, working together to
answer questions from the textbook’s chapter on the Crusades.
Apparently, Mr. Graves thought it was better for the students to
teach themselves while he sat at his desk, circling low-rent
apartment vacancies in Phoenix.

Jenna looked away from the
bane of her existence, Valentine Lockhart. She hadn’t been staring
at him, per se, but more at his chest—clothed in a faded yellow
T-shirt with
OASIS HIGH SCHOOL
in red chipped lettering above the school’s
mascot—a half-peeled red scorpion iron-on with its stinger still
perfectly intact, poised to strike.

She hated that Mr. Graves had put her with
three of the seven people who she hated. None of her friends were
in history with her. No wonder she was close to failing. Not to
mention Mr. Graves’ subpar approach to education.

It was Jenna’s last year. She had senioritis
even when she was a freshman. Back then, she’d been friends with
the Stuck-Ups. They used to talk about the joys of graduation—which
meant freedom. Jenna still cared about graduation, but it had more
to do with never seeing the Stuck-Ups again.

She looked over at Mr. Graves, still circling
prospective places to run away to. Despite his don’t-give-a-damn
demeanor, she wished him luck on his quest to flee from the quiet
town of Oasis, Arizona where nothing really happened.

The biggest news of the year was when local
deputy Harris “Tiny” Harrison won the hotdog eating contest in
Scottsdale, and then died a day later from a heart attack. Mayor
Grahame Goode had put up a grand statue of Tiny on Main Street. For
either a tribute or an insensitive and thoughtless gesture, the
town had served free hotdogs to all attendees.

Despite the ridiculousness, Jenna had gone to
the ceremony. No one passes up free food.

Jenna turned away from Mr. Graves’ hopes for
a better life and stared at her former friend, Sadie Pierce. She
was platinum blond and beautiful in her tight tee and jeans. She
was sitting next to Val, whose golden blond hair was a sexy wild
mess. Sadie’s boyfriend, Kit Cavanaugh, rounded out the rotten
trio, scratching at his brown beard that was fuller than the buzz
cut on his head. He’d never said anything mean but Jenna still
hated him; he was guilty by association.

Jenna gave Sadie a false smile. “I see
someone’s been paying attention in English. ‘Acknowledge.’ Such a
big word for you, Sadie. Go home and tell your parents. I bet
they’ll be so proud!”

Jenna didn’t used to be so sarcastic. She
used to cry all the time. But when the Misfits—an insult her four
friends proudly accepted—had taken her in and treated her as a true
friend, she got some gumption back.

“
Don’t encourage her!” she
scolded Val.

“
And you!” She turned her
fury to Kit, who was still scratching his soon-to-be hobo beard.
“Why aren’t you saying anything?”

“
Ugh!” Sadie groaned. “Just
move your desks away from her! We can do this assignment all on our
own!”

Their desks were already two feet away, but
Val and Kit obliged Sadie, and moved another two feet. Alone, in
the middle of the classroom, Jenna was a boat without a paddle in a
sea of unfriendly or indifferent ships. No one seemed to notice she
was adrift. Not even Mr. Graves, who’d finished circling and was
now dozing off with drool running down his salt-and-pepper stubbly
chin.

Jenna almost wished that she’d go into
another trance. Even if she saw herself killing another person, it
was worth it to escape her tormenters. No matter how much sass she
spilled, how many feelings she hurt, or how much she showed their
taunts didn’t matter, at the end of the day, lying awake in bed at
night, there was a part of her that still mourned for the life she
once had—for the boyfriend she once had.

In the beginning, he’d seemed perfect as all
handsome guys do. He’d been nice and sweet until she’d said no.
He’d asked again. And she’d still said no. He’d asked a third time,
not so nice and sweet. She’d wavered, thinking, but then said “no.”
Refusing to have sex with Valentine Lockhart had cost Jenna all her
friends. He’d been enraged, calling her a “tease,” and through some
sort of wicked persuasion, had convinced all her friends to disown
her. Jenna didn’t think he could be so cruel, and her friends could
be so malleable.

To ease her suffering, she’d remembered her
late grandpa’s words of wisdom:

Her former friends were clearly weak,
believing every lie and half-truth about her.

But Jenna was weak too.

She’d resolved to never show her wounds,
pretending like they weren’t there, but in reality, they were just
hidden with a flimsy bandage. She wanted to be strong, to heed her
grandpa’s advice, but at seventeen with a past life destroyed, a
present life with no direction, and a future of no promise, well,
that’s just a great big recipe for weakness.

The bell finally rang, announcing lunch. The
students scattered out and Mr. Graves woke up from his nap. Jenna
thought that she was the last to leave, but Val caught her by the
arm as she exited the classroom. Sadie and Kit were ahead in the
hall, looking on, confused—just as Jenna was.

Jenna jerked her arm from his grasp. “Why?
’Cause you’re so great?”

He gave her a malicious smile. “You’ve gotten
fat. If you were still with me, I would’ve kept you looking
good.”

No girl likes to be called “fat,” but she
kept her cool, throwing an insult back at him. “If I would’ve
stayed with you, I would’ve got a venereal disease.” She pushed
past him. “Now if you’ll excuse me, I have to find my friends.”

She walked casually by Sadie and Kit as if
their presences weren’t toxic.

Sadie kept quiet, but wrinkled her nose at
Jenna as if she smelled. Kit kept scratching at his beard.

Val easily caught up and blocked her exit.
“You’re such a loser, Jenna.”

Jenna smiled, showing how strong she could
be. “Yes, I was a loser—when I went out with you—but not anymore.
I’ve gotten over it. Apparently, you haven’t.”

She wasn’t being entirely truthful. Valentine
Lockhart was beyond gorgeous with fairy tale golden locks and
Tahitian blue eyes. A part of her still swooned every time she saw
him. But the memories of their relationship and how it’d ended
brought her back from the brink of insanity where she almost
believed that he was her soul mate.

Jenna shrugged. “Whatever helps you sleep at
night.”

She found a space in the crowd and moved
around Val, casually walking away—but she really wanted to run.

“
I sleep fine!” His voice
carried down the hall. “You’re the one tossing and turning over me!
No wonder you come to school looking like a freaking
zombie!”

He was throwing insults like curveballs, but
Jenna kept catching them in her it-doesn’t-bother-me glove as she
walked down the hall.