Read Call Down the Stars Online

Call Down the Stars 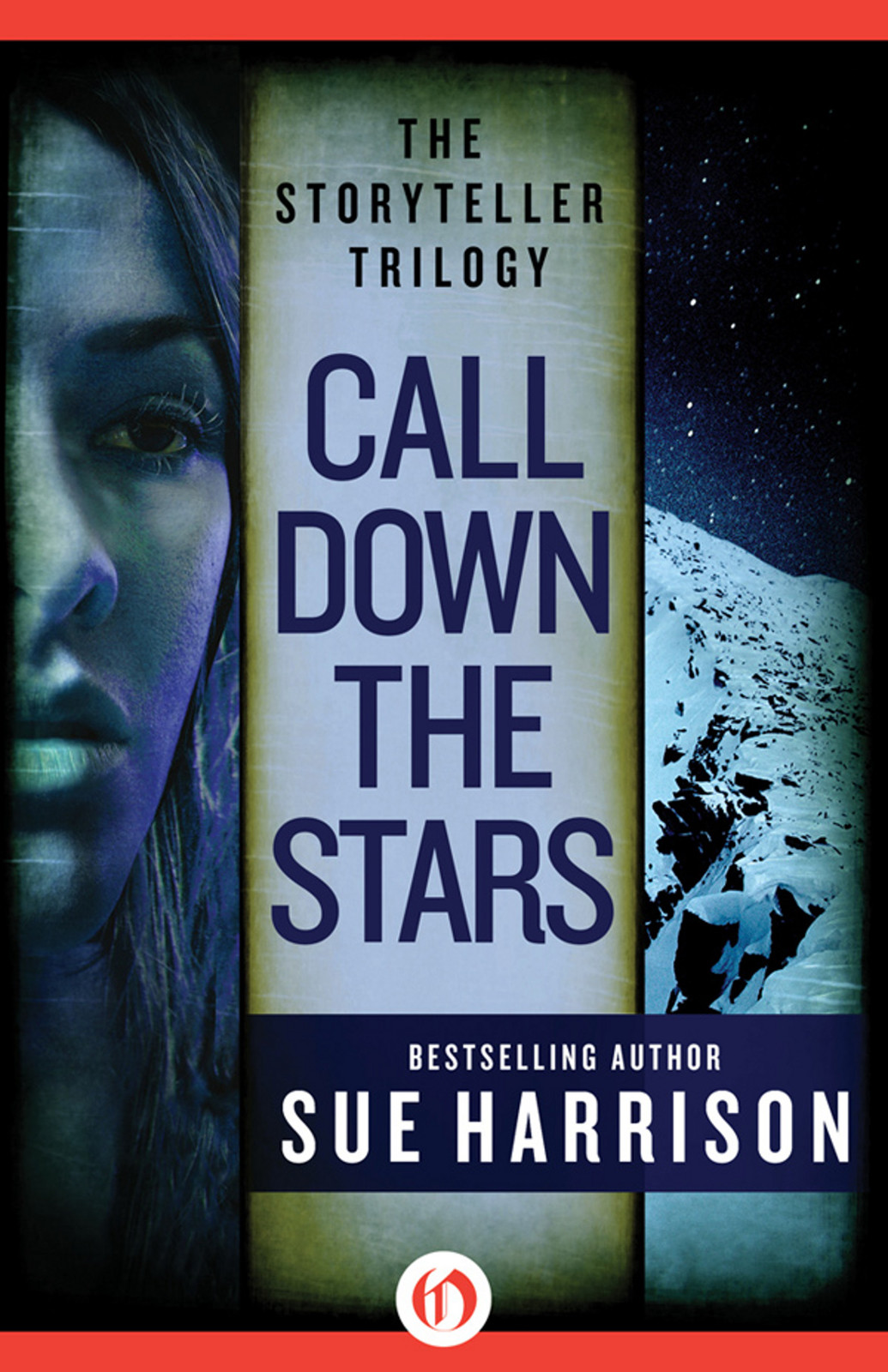 Call Down the Stars
The Storyteller Trilogy
Sue Harrison

To my husband, Neil, and

Encouragers and teachers all!

A Biography of Sue Harrison

Cries-loud, son of Sok, husband of Yaa, stepson of Dii, brother of Carries Much

Sok, brother of Chakliux, husband of Dii, father of Cries-loud and Carries Much

Dii, wife of Sok, stepmother of Cries-loud and Carries Much

Carries Much, son of Sok, brother of Cries-loud

Cen, husband of Gheli, father of Ghaden and Duckling, stepfather of Daes

Duckling, daughter of Cen and Gheli, sister of Daes

T
HE OLD WOMAN’S BONES
protested against the tight space where she lay. She shivered and looked up at the oiled sea lion skins stretched taut little more than a handbreadth above her nose. She worked her way farther into the bow, shifting her hips, scooting with hands and heels.

The traders had not allowed her to use hare fur blankets as padding, but rather had given her fur seal. Fur seal was thicker and warmer, they had told her, and she knew they were right, but it was foreign to her nose, and she longed for the good earth smell of hare pelts.

You think you would be able to stand the cold if the traders had given in to your wishes, old woman? she asked herself. And she was disgusted at her own childishness, allowing her wants to blur her reason.

She wrapped her arms over her chest and braced herself as Yikaas climbed into the iqyax, thrusting strong legs on either side of her. She heard his paddle as he pushed it against the shore, the grating of gravel on the bottom of the iqyax, and the sudden sway of the craft as the land released them.

Her stomach twisted, and she held her eyes wide, as though by stretching her lids open, she could see the sky through the yellow wall of skin that covered the iqyax’s red-dyed wooden frame. Though Yikaas’s body gave off heat, the cold stole in from the sea, and her ankles began to ache, crossed as they were to fit at the point of the bow.

She thought back to the last time she had traveled in such a way, like ballast rock, dead weight in a man’s iqyax. Then her husband had been alive, and she was young, though she had felt old, her womb empty for some seven winters, her oldest child grown and a hunter, her youngest certainly able to live a summer without her. Her husband had decided to take her to the Traders’ Beach so she could visit with other storytellers, some from villages as far away as the Whale Hunters’ islands.

She had been shy, saying little, listening much, but their stories had stretched her mind and sent her on journeys of words that made the world she had known seem small.

Over the past few winters, she had watched as Yikaas became a man. His shoulders grew wide, and even his otter foot took on strength. Young women honored him with coy glances, lured him with boldness, and he wore his pleasures as proudly as a warrior bears the scars of his battles.

He was Dzuuggi, already knew the secrets of the River People, but like many young men, he had become too full of himself. She had no choice but to show him how large were the boundaries of the earth, how small his understanding.

He had seen the journey as an adventure, come willingly, and now they had traveled for more days than she could count. Each morning they joined traders from the River villages, and these past few days even a few Sea Hunters had traveled with them. Each morning she berated herself for her foolishness in choosing to come with Yikaas. After all, he was young and strong. He could have made the journey alone.

She had been teaching the boy the few words of the Sea Hunter language that she knew, and now she brought those words into her mouth, held them there, thick in her throat, as an amulet against the power of the sea. Each day on this journey she had told herself Sea Hunter stories of Chagak and Shuganan, Kiin and Samiq, called those ancient people to dance above her, silhouetted against the sea lion skins like shadows cast in a caribou hide lodge by those who live within. Today, though, to help her forget her fear and discomfort, she would rely on the tales of Chakliux, that great storyteller, and his wife, Aqamdax.

The old woman, Kuy’aa, spoke softly, filled the inside of Yikaas’s iqyax with whispered words, and by midday, the movement of the paddle, the comfort of the stories allowed her to sleep. She fell into dreams, and her mother’s voice came to her. For a little while, she became an infant, new in the world to which she had been born, bound in a cradleboard, knowing the rhythm of her mother’s body.

Suddenly the iqyax lurched, and her belly knotted in fear. She was old again, her hands reaching in reflex to scrabble at the iqyax’s carved ribs. She felt the bump of something beneath them. Animal, she thought, and could not remember whether she had checked her feet for stray bits of grass before they started out that morning. Sea Hunters said that a bit of grass caught between the toes was all sea animals needed to take offense. Then they would come from the depths in anger to bite holes in iqyax walls.

Her toes were numb, cold and stiff as wood, but she thought she could feel long strands of grass between them, tickling the bottoms of her feet, prickling her ankles.

Another bump, this one so strong that the iqyax frame bent and groaned; the knotted joints moved and heaved like the bones of a skeleton. The old woman cried out, and when she did, the Sea Hunter words she had been holding as amulet in her throat escaped into the iqyax, and the air around her was suddenly so thick with them that she could scarcely breathe.

Then she heard Yikaas’s voice, like a parent calming a child. “We are here, Aunt,” he said. “At the Traders’ Beach. It’s low tide, and we’ve found a few rocks. If it’s too rough for you, I’ll wait in the bay until the sea rises.”

The old woman lifted her fingers to her lips, pushed a path through the Sea Hunter words, and said, “Go in now, if you are able.”

She pulled the fur seal blanket like a caul over her face, wrapped her arms around herself, and tried to become small, so Yikaas could guide the iqyax, not only with his paddle but with the shifting of legs and buttocks.

Finally the hull ground into sand, and Yikaas untied his hatch skirting. A rush of cold air slid into the iqyax, released the stories, the words, her fear. Then his strong hands were under her arms, drawing her out, peeling away the layers of the fur seal blanket. He helped her stand, and she spread her feet wide on the earth to keep her balance.

“You have brought your grandmother?” someone asked. He spoke in the River language, but his voice carried the accent of a Sea Hunter.

Extraordinary Losers 2 by Jessica Alejandro
A Cast of Killers by Katy Munger
Under My Skin by Sarah Dunant
Legacy of a Dreamer by Allie Jean
The Memory Palace by Mira Bartók
1635: A Parcel of Rogues - eARC by Eric Flint, Andrew Dennis
Vive y deja morir by Ian Fleming
Post Office by Charles Bukowski
Die Dog or Eat the Hatchet by Adam Howe
Fallen Angel by Kevin Lewis