Read Can't Get There from Here Online

Can't Get There from Here 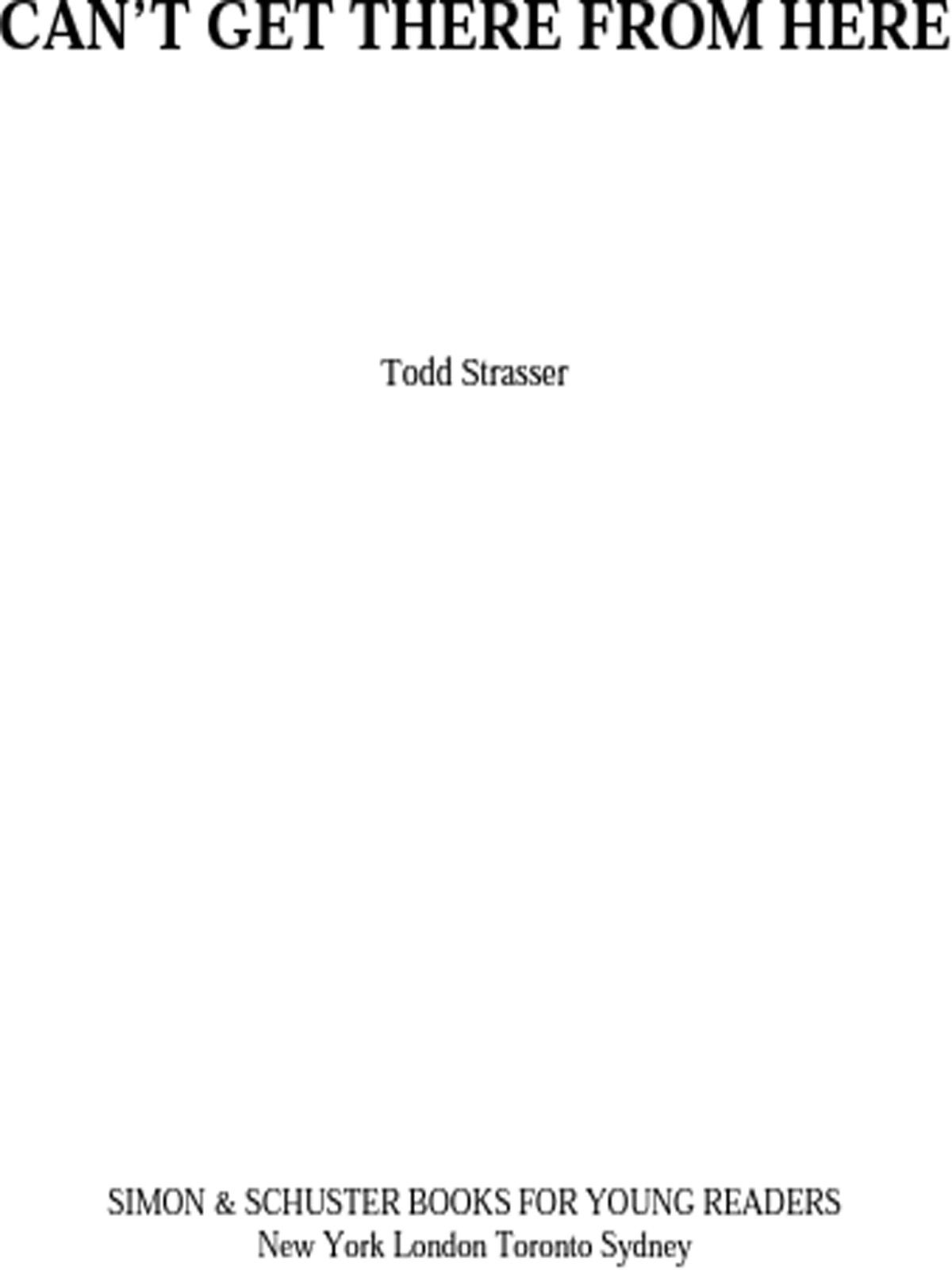 CAN’T GET THERE FROM HERE

CAN’T GET THERE FROM HERE

The text for this book is set in Life BT.

Can’t get there from here / Todd Strasser.

Summary: Tired of being hungry, cold, and dirty from living on the streets of New York City with a tribe of other homeless teenagers who are dying, one by one, a girl named Maybe ponders her future and longs for someone to care about her.

To “the real” David Gale

And thanks to Dr. Petra Deistler and Lauren Honigman for their valuable contributions
.

Maggot said we should go up to Times
Square to watch the ball drop and pick some pockets, but we never got around to it. Instead we hung out in front of the Good Life Deli like we always did. Maggot, Rainbow, 2Moro, and me. A cold mist drifted out of the dark, the little droplets sparkling in the streetlights. Maggot and me sat under the awning of the newspaper stand on the corner. The damp matted down our hair. Black puddles dotted the street and steam rose like ghosts from the manhole covers. Rainbow sat crosslegged against the wall, loose strands of blond hair falling out of a blue wool cap, her head nodding almost down to her lap. 2Moro leaned against the streetlight with her arms crossed, not saying anything to anyone, just waiting for someone to say something to her.

It was one of those nights when there wasn’t much traffic on the streets of New York. Most of the New Year’s partiers were done with their stupid celebrations and back in the four-walled cells they called apartments. Prisoners of the system, Maggot said. Now, only the newspaper delivery trucks and taxis passed, their tires making squishy sounds on the wet, black pavement. Out
here in the cold where we weren’t walled in, we were free to go where we pleased.

“Guess the cops have the night off,” Maggot said, his brown dreadlocks stringy from the mist; his breath a small cloud of fog.

“The rest of the world, too,” muttered 2Moro. She was wearing a red-and-orange patchwork jacket, a tight black skirt, and high black boots. Her short dyed red hair was matted down on her forehead like a cap. The piercings in her ears and eyebrow and nose glinted in the streetlight. Tattooed around her neck was a circle of black barbed wire.

I sipped cold coffee from a paper cup. At night we drank coffee to stay awake. It was safer to sleep during the day.

A man and a woman came around the corner wearing raincoats and sharing a red umbrella. They slowed down when they saw us. The woman slid her arm through the man’s and said something in his ear. Probably wanted him to turn around and go another way. But the man shook his head. Taking stiff strides, they walked toward us.

When they got near, the woman wrinkled her nose like something smelled bad.

The couple broke stride. “Yes, we did,” the man answered.

“Day after that it’s back to the old nine-to-five grind,” Maggot said.

“You could say that,” answered the man.

“Happy New Year,” said 2Moro, not in a friendly way.

“Same to you,” said the man. He and the woman hurried past. She kept glancing over her shoulder at us until they reached the next corner.

“Robots,” Maggot said. “Just following the rules. Work till they die. Then new robots replace them.”

“Check this.” 2Moro tilted her head down the sidewalk. A man came toward us, unsteady, dragging the toes of his shoes. The shoulders of his suit were dark with water and his white shirt collar was open, a blue-and-red tie hanging like an upside down noose. His face was clean-shaven, and even though his wet hair fell flat on his forehead, you could see that it had been recently trimmed.

We watched as he stumbled along, not yet aware of us. When he passed under a streetlight, something gold glinted on his wrist and light reflected off his wet polished leather shoes.

From her seat against the wall Rainbow raised her head. “Oh, Maggot, you’re so full of it. You never rolled a drunk in your life.”

“People do it all the time. How hard could it be?”

“The bigger they are, the harder they fall.” Maggot rose to his feet. “He’ll never know what hit him.”

“Let’s do it,” said 2Moro. She crossed the sidewalk and joined Maggot in the shadow of the newsstand awning.

Rainbow pressed her hands against the ground and tried to push herself up. “Come on, Maybe. Time to get outta here.” But she lost her grip and slid back down.

“Try again.” I put my hands under the arms of her black leather jacket and helped her up. Out of the corner of my eye I saw the drunk guy a dozen yards away down the dark, wet sidewalk. He looked up, saw us, and stopped. I got Rainbow to her feet, turned her by the shoulders, and started to lead her away.

We were halfway down the block when the scuffle began. Maggot and 2Moro trying to wrestle the drunk down. Maggot pulling at the guy’s jacket from the front. 2Moro hitting him from behind. Only the drunk didn’t seem to get the idea. 2Moro and Maggot barely came up to his shoulders. He swung his arms and Maggot went down. Then he grabbed 2Moro and threw her so hard she disappeared between two parked cars. The drunk took a step, tripped over Maggot, and fell to his hands and knees. Maggot got up and jumped on his back. 2Moro came out from between the parked cars and started to kick the guy in the sides.

The guy yanked Maggot down to the sidewalk and straddled him. 2Moro was still kicking and hitting him,
but the guy hardly seemed to notice. Pinned on his back under the drunk, Maggot flailed with open hands. The drunk slammed his fist into Maggot’s face. Down the block Rainbow and me heard the crunching sound and saw Maggot go limp on the sidewalk. The drunk grabbed 2Moro by the wrist. She tried to shake free, but he wouldn’t let go. He staggered to his feet and pulled his fist back like he was going to hit her next.

“Hey, don’t!” I yelled and ran back toward them. I hated it when kids got hit. Got hit too many times myself. Not just with fists, neither.

Still holding 2Moro by the wrist, the drunk turned to look at me. I stopped a dozen feet away. “Please don’t hurt her, Mister. Please?”

“They jumped me,” the guy said.

“Didn’t mean it? You crazy? They were kickin’ and hittin’ me. They wanted to rob me.”

Maggot sat up on the sidewalk, hands covering his mouth and nose, dark red blood seeping out between his fingers. The drunk still had 2Moro by the wrist. She kept swinging, trying to hit him.

“Let me go!” she screeched.

“You kiddin’ me? She’s twice as bad as him.” The drunk pointed at Maggot.

“If I let go, you gonna go quietly?” the drunk asked.

He yanked her arm up behind her back. 2Moro let out a squeal and went limp. “Okay, okay,” she whimpered. The guy let go and 2Moro stumbled away, cradling her arm. The whole thing must have sobered the guy up, because he stood straighter and tightened the blue-and-red tie around his collar. He looked down at his suit. The knee was torn. “Look what you kids did.”

“Sorry?” he repeated. “Your friends jump me and you’re sorry?”

“They just wanted some money.”

“Then they should’ve asked.” He looked around. 2Moro was rubbing her sore arm. Maggot was sitting on the sidewalk, staring at the blood on his hands. Down the block Rainbow was leaning against another wall, her head and shoulders again dipping toward her waist.

“Just a bunch of punks out to roll some drunks on New Year’s Eve,” the guy grumbled in disgust.

“Well, you picked the wrong drunk.” The guy started
to walk away through the mist. He reached into his pocket and tossed out a handful of loose change. As the coins clattered onto the sidewalk, he said, “Happy New Year.”

Country Club was lying in Piss Alley next to a Christmas tree someone had thrown out a window of the apartment building next door. The Christmas tree was on its side; Country Club lay on his back. His eyes were open. Glassy and dull. Like he was staring straight up at heaven. Sometimes on sunny days Country Club’s eyes looked green. But on this cold gloomy day his eyes were as gray as the clouds overhead.

Under a film of dirt Country Club’s skin was pasty and almost green. He had a wispy light brown beard, thin so you could see through it to his jaw and chin. On his left cheekbone was a long, crusty brown scab. On his right cheek was a small black tattoo of a spider’s web. His long, tangled brown hair was spread out on the ground, mixed in with the torn papers and candy wrappers and bent straws that littered the alley. Bits of paper and dirt and a single strand of silver Christmas tinsel clung to his beard. His arms were spread out. One hand turned up, the other turned down. His hips were twisted sideways, his legs bent at the knees like he was running.

But he wasn’t going nowhere.

Piss Alley smelled like pee because the restaurants and stores wouldn’t let us use their bathrooms. OG was on his knees beside Country Club, sobbing. The tears left light trails down his filthy cheeks. When street people cried, their tears were filmy with grime.

OG’s hair was long and dirty blond, dreadlocked, and he had a bushy blond beard. One of his earlobes was stretched to the size of a quarter and had a clear round
plastic plug in it. He wore bars and rings in his eyebrows, nose, and lips. OG and Country Club were partners. They traveled all over together.