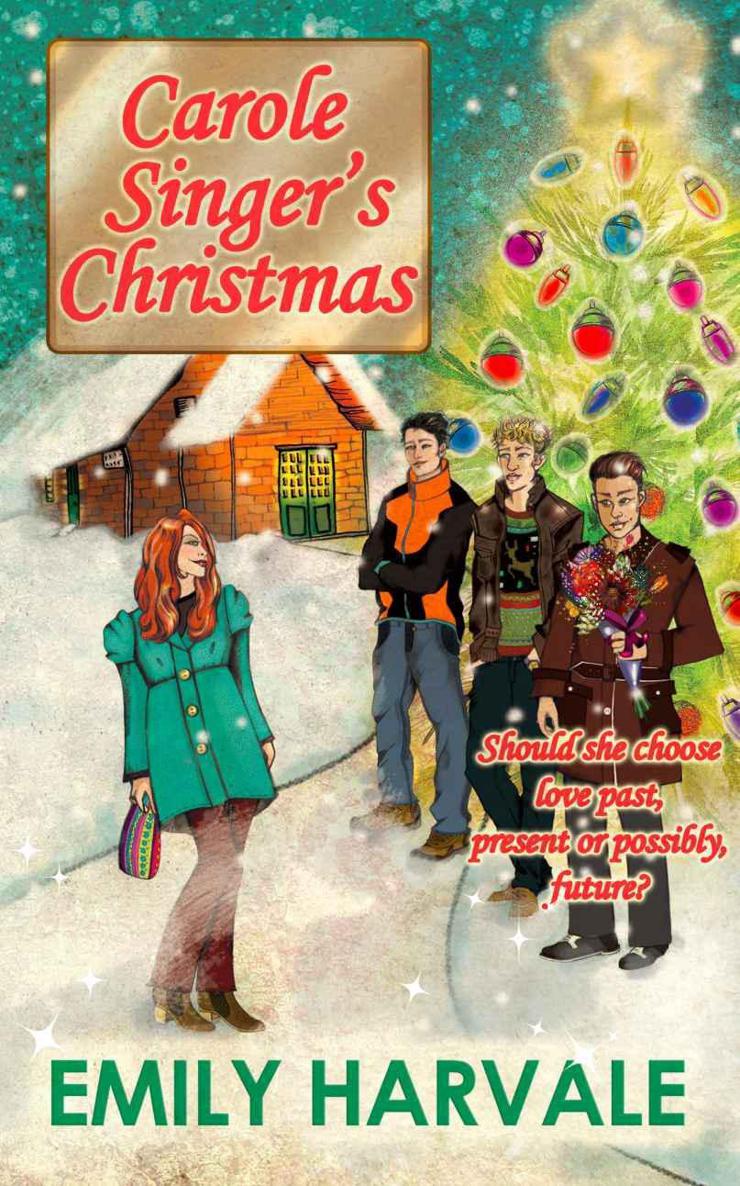 The right of Emily Harvale to be identified as the author of this work has been asserted by her in accordance with the Copyright, Designs and Patents Act 1988.

No part of this publication may be reproduced, stored in a retrieval system, or transmitted, in any form or by any means, without the prior written permission of the publisher and author.

Author contacts and Also by

Thanks, as always, to my wonderful friends for their support and friendship.

Massive thanks to Karina of Miss Nyss
www.missnyss.com
for another gorgeous cover.

Grateful thanks to Christina Harkness for editing this novel and for her greatly appreciated input.

Heaps of thanks to David of DC Creation for all the clever things he does for my website, blog, launch events, bookmarks and designs. I don’t know what I’d do without him.
www.dccreation.com

And to you, the reader, wherever you may be, for buying this book – Thank You.

In memory of Charles Dickens for giving the world,

A Christmas Carol
and providing me with the inspiration for this book.

Thank you for choosing this book. I hope you’re looking forward to Christmas as much as I am. I simply adore this time of the year. I love the sparkle of the lights; the colours of the decorations; the glow of burning coals; the smell of Christmas spices; the taste of mince pies warm from the oven; the Christmas traditions: stirring the cake mixture three times and making a wish, kissing under the mistletoe, burning a yule log; the magic in the air;  Christmas music blaring in overcrowded shops; buying singing Santas and dancing turkeys and the thrill of finding the perfect gift for someone special; cold, crisp mornings and long, dark nights; sipping sherry; knocking back the Baileys; spending time with family and friends and telling ghost stories around the fire; fond memories of those no longer with us. I love it all. I hope you enjoy reading this book and it fills you with the Christmas spirit! I wish you a Christmas and New Year full of happiness, warmth and love.

By the way, the Geminids meteor shower mentioned in this book is real. It takes place on the nights of December the 13
th
and 14
th
and is a spectacle well worth watching. I’ll be saying the rhyme in the book and making my wish. I hope you will too.

This book was written and edited in British English, including all spelling, grammar and punctuation.

‘Carole!’ Dominic yelled from the sitting room. ‘Will you
please
come and sit down for just one minute? There ... there’s something I need to ask you.’

Carole stopped in her tracks. She hovered on the threshold of the utility room, her eyes alight with eager anticipation. There was something about Dominic’s tone.

Was this
it
? Was he actually going to propose at last? They’d been dating for almost three years now. Surely, it was time? And she’d given him enough hints – not that Dom had seemed to notice.

She drew in a deep breath and hesitated for a few seconds before dropping the washing on to the floor of the utility room. Ignoring the flashback to her mother’s house where piles of washing, magazines, books, pictures, shoes and empty wine bottles were akin to exhibits in the Tate Modern, Carole marched into the sitting room. The washing could wait. A few dirty clothes on the floor didn’t mean she was turning out like her mother, and nothing was more important than this moment. She could sort the whites from the colours later.

‘Of course, darling,’ she said, smiling as she cast a reassuring glance around the room. She was nothing like her mother. Not even a speck of dust was visible.

‘Come and sit here,’ Dominic said, plumping up Carole’s favourite cushion and placing it almost reverently back on the sofa.

He licked his lips and Carole watched him closely as she sat down. He always did that when he was nervous. This was it. This
must
be it! She would finally be able to get rid of the name that had been a weight around her neck for her entire life; the name that had made her the butt of so many jokes and stupid remarks especially around this time of year. Oh, joy of joys! She could finally bid goodbye, once and for all, to the awful, horrendous, ghastly ...
CAROLE SINGER
!

She eyed Dominic hopefully. Why wasn’t he getting down on one knee? Why was he pacing the room and rucking up the new rug she’d bought last week? And why do this now? As eager as she was for him to pop the question, their sitting room wasn’t the most appropriate place to propose. She’d been hoping for the whole enchilada: a romantic dinner at a posh restaurant; roses; champagne; a violinist. No, a violinist was tacky these days; it would have to be a harpist. Oh, why didn’t he just get on with it? She longed to be plain old, Carole Smith.

Well, she didn’t long to be old. It was bad enough that she had almost four years on Dominic as it was and the fact that she’d be thirty-five next birthday just made things worse. Thirty had been terrifying but thirty-five! That was almost forty – and … she was still single.

‘Dominic?’ she coaxed, in what she hoped was a sexy drawl. ‘I won’t bite, darling. You know you can ask me ... anything.’ She gave him an encouraging smile.

He let out a long sigh, dragged a hand through his short brown hair and smiled sheepishly.

‘The thing is this,’ he said. ‘I ... I know we agreed to spend this weekend together, Christmas shopping, but the lads have got tickets to see
Rob The Rich
on Saturday – in Manchester – and you know they’re my all-time favourite band. I’ve been trying to get tickets for months, you know I have. Jerry is friends with one of the bands’ sisters or something and he’s scored us backstage passes. Can you believe that? I can’t miss this, babe. I just can’t! You don’t mind, do you? Carole? Are you okay? You ... you’re not angry are you? You know I’d understand if the roles were reversed and your friends got you tickets to see ... Michael Bubbly or someone.’

Carole’s eyes met his. ‘It’s Michael Bublé, not Bubbly,’ she said, not quite sure what had just happened.

‘Whatever. It’s okay if I go, isn’t it? You can go and visit your gran. You’ve been saying for a few weeks now that you wanted to see her. I’ll come down on Sunday afternoon if you want. Oh ... on second thoughts, that probably isn’t a good idea. I expect we’ll go for a few bevies after the concert and you wouldn’t want me to get stopped for drink driving, would you? The coppers are really hot on that this time of year and alcohol stays in the system for at least twenty-four hours or something. Besides, it’d be a real rush to get back from Manchester and drive down to Sussex.’

‘What?’ Carole blinked several times as she tried to clear her muddled brain. How had Dominic gone from proposing to her, to telling her he was going away for the weekend – without her?

‘What’s wrong, hun? You seem to be on a different planet. I was saying that it would be best if I didn’t come down to your gran’s. She’ll prefer to have you to herself anyway. And she never lets us share a room so there’s no point in me driving all that way. I’m sure she doesn’t like me even after all this time. Anyway, I’ll be leaving on Friday evening and I’ll be back late Sunday night, possibly early Monday – in which case I’ll go straight to work. Why are you looking at me like that? ... Carole? ... Er ... isn’t that your mobile ringing?’

‘What?’ Carole said for a second time. ‘Oh, yes.’ She stood up and grabbed her phone, snapping herself out of her stupefied state. ‘Hi Gran. We were just talking about you. How are you?’

Dominic raised his eyebrows, tutted and strolled into the kitchen.

‘Hello sweetheart. I’m fine thanks. How about you? Is ... is everything going well?’

Carole thought she detected a hint of tension in her grandmother’s voice and instantly felt guilty for having left it so long between visits.

‘No, no, I’m fine. Really. I couldn’t be better. I suppose you’re rushed off your feet as usual?’

‘You know me, always making more work for myself than I need to,’ Carole joked.

She knew she was a perfectionist when it came to her career as an illustrator and graphic designer and that she spent far longer on her drawings and designs than was absolutely necessary, but she could never let her work go out to clients until it was one hundred and ten per cent perfect – to her eyes. She also knew she devoted more time to the housework than most people, and cooking, and sewing and ... well, everything really. Anything she did, she did to perfection. That’s just the way she was, or the way she had become.

‘Yes, sweetheart. You take after your father in that respect. He was the same, God rest his soul. Everything had to be the best that it could be. It’s a pity some of that attitude didn’t rub off on your mother. How we all put up with her sometimes is beyond me. Have you heard from her this week?’

Carole sighed, remembering her father. He’d been dead for almost twenty years now but she still missed him dreadfully especially around Christmas time. He loved Christmas and everything that went with it, and now that she thought about it, so had she – until he passed away. She hadn’t even minded the jokes about her name before that.

‘I spoke to Mum yesterday. She’s invited us all up to Scotland for the Christmas holidays. I’m not sure I can face it to be honest and Dom
really
doesn’t want to go. We were thinking of saying that we wanted to have a quiet Christmas here, just the two of us, and that we’d be popping down to you as usual, but you know what Mum’s like. I’m sure she’ll try to badger us all into going. Of course, if you want to go, we’ll come down and get you and drive you up there.’

‘Good Heavens no! Spend the whole of the holidays with my daughter? I may as well just give myself salmonella now. Louis Pasteur would have been proud of her! There are more bacteria thriving in her house than in any laboratory, I’m sure of it. Those germs would have me
for
their
Christmas dinner, and as much as I love her, I really can’t face it. Spending just one day tidying up after her was bad enough but at least when she lived in Essex, I could leave at the end of it and come home. I can’t do that in Scotland. I don’t think I’ll ever understand why she and that new man of hers wanted to move all the way up there. Anyway, I’m staying put – and I’ve told her so in no uncertain terms.’