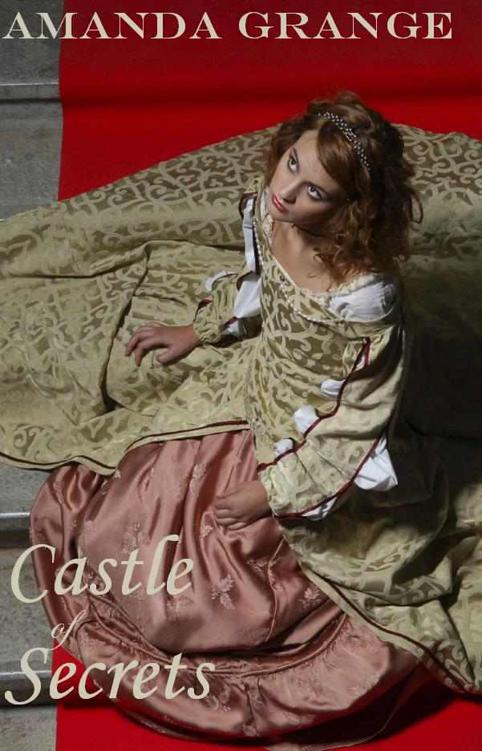 The moral
right of the author has been asserted

No part of
this publication may be reproduced, stored in a retrieval system, or
transmitted in any form or by any means without the prior permission in writing
of the publisher. Nor be otherwise circulated in any form of binding or cover
other than that in which it is published and without a similar condition
including this condition being imposed on the subsequent purchaser.

This book is
a work of fiction. The characters and incidents are either fictitious or are
used fictitiously. Any resemblance to any real person or incident is entirely
coincidental and not intended by the author.

First
published in hardback by Robert Hale Ltd. under the title of
Stormcrow
Castle

or
on Amazon US

“Hits the Regency language and tone on the head” –
Library
Journal

Helena Carlisle rested her valise on
the dry stone wall and peered into the gathering gloom. The March daylight was
fading and she was beginning to feel uneasy. The carrier had told her it was
only two miles to
Stormcrow
Castle
but she had already
walked three miles across the moor. She strained her eyes but there was no sign
of the castle, nor was there any sign of a house at which she could ask for
directions. Looking over her shoulder, she wondered if she should retrace her
steps, but it was a long way back to the nearest town and she decided to
continue on her way. She picked up her valise and walked along the rutted road,
bending her head against the icy wind and praying it would not snow.

A sound
disturbed the silence and, looking back, she saw a speck in the distance. As it
drew closer she could see that it was a coach, racing towards her. Four black
horses were pulling it, and it was swaying from side to side. She stepped aside
to let it pass, but as it drew level with her, the horses were reined in and
the coach rolled to an abrupt halt. The door was flung open and a man's voice
said: 'Get in.'

She was about
to back away when she caught sight of the gentleman inside. She heard her
aunt's voice in her memory: "Like a portrait, he is, with his gaunt face
and his long, pointed chin. He should have been living in 1617, not 1817. Lord
Torkrow his name is, but no one calls him that hereabouts. They all call him
Stormcrow."

Late
? she thought uneasily.
But
I didn’t tell anyone I was coming
.

She hesitated,
but she had to reach the castle, and as she was already weary, she lifted the
hem of her cloak and climbed inside. He slammed the door shut and rapped on the
floor with his cane, then the coach pulled away, quickly building up speed and
racing on again.

As she settled
herself opposite him,
Helena
regarded Lord Torkrow covertly. He had no pretensions to
being handsome. His face was thin and sharp, and his eyes looked as though they
held secrets.

'Well?' he
asked suddenly. 'Does my visage please you?'

Helena
realized she had been
staring.

He raised one
eyebrow in silent challenge.

His lips
curled. 'A good choice of word. It means precisely nothing. But let it pass.'
He regarded her appraisingly. 'You're very young to be a housekeeper.'

‘A
housekeeper?’ she asked, startled.

‘I have been
waiting two weeks for the registry office to send me a replacement. They have
been very lax. If they do not do better in future, I shall use Jensen’s office
instead.’

She felt a
cold chill, and pulled her cloak about her. Why did he think she was a
housekeeper? Her  aunt was the housekeeper at
Stormcrow
Castle
.

‘The registry
office did tell you the vacancy was for a housekeeper? Or did they describe the
post as a chatelaine?’ he asked with a grimace. ‘If you are imagining the
castle to be a fashionable establishment, you will be sorely disappointed.
There are no fine rooms; no army of servants; no touring visitors calling at
the doors and begging to be shown round.’

‘But I thought
Mrs Carlisle was your housekeeper?’ she said cautiously, wondering if she had
mistaken him, and he was not Lord Torkrow after all.

‘They have
sent me a half-wit!’ he muttered under his breath, then out loud he said: ‘Mrs
Carlisle left my service. She went to nurse her sister and will not be
returning. That is why I need a replacement.’

Helena
felt disoriented. Her
aunt could not possibly have left to nurse her sister, for she did not have a
sister.

‘You do have
experience as a housekeeper?’ he asked.

‘Yes,’ said
Helena
, recalling the six months
she had spent working for Sir Thomas Alderley, before his new wife had decided
she was too young for the position.

‘That is
something, at least. You should have been here yesterday.’

She remained
silent, considering what to say. If she revealed who she was then she would
learn nothing more, for he had already told her that her aunt had left his
service, and he would stop the carriage and expect her to return to town. But
if she went to the castle in the guise of the new housekeeper, then she would
have an opportunity to speak to the other servants and perhaps learn more about
her aunt’s sudden departure.

He leant back
against the red squabs and his cloak spread across them like a cloud blotting
out the sun.

The coach
lurched as it turned off the main road and onto a narrow track. She glanced out
of the window, but there was nothing to be seen; nothing but the endless
expanse of moor, gradually losing all colour in the fading light. At last the
coach began to slow its pace. Up ahead, she dimly perceived the outline of a
high stone wall, and then they were plunged into darkness as the coach passed
beneath an archway. She felt her hands grow clammy. One heartbeat . . .  two .
. .  three . . .  then the darkness lifted and they emerged into a courtyard. A
turning circle enclosed a patch of lawn which might once have been fine, but
which had now grown wild. Coarse grass had embedded itself amongst the smooth
grass, as the moor had encroached on the civilized world.

'We're almost
there,' he said.

The coach
finally rolled to a halt. The coachman opened the door and lowered the step.
Lord Torkrow climbed out.
Helena
followed him, and looked up at the forbidding walls of
Stormcrow
Castle
.

It was a long,
low building with a central square turret and two wings arranged symmetrically
on either side. The door was arched, and above it there was a sickly yellow
light shining from a rose window. Crenellations ran along the top of the roof,
thrusting their way into the sky like broken teeth.
Helena
felt a frisson of anxiety. There was
an atmosphere surrounding the castle. Isolated and exposed, it seemed
malevolent, and she shivered, reluctant to go inside.

'A little,'
she said, trying to speak bravely.

With these
cheery words he led her up to the door. Without waiting for a servant to open
it he seized the iron ring and turned it, then pushed the heavy oak door
inwards. He disappeared into the gloom and she followed him, finding herself in
a cavernous hall with tapestries decorating the walls, and a huge fireplace,
which was large enough to swallow her whole. The floor was bare, and was made
of massive stone flags, discoloured with centuries of use.

‘You will have
plenty to do,’ he said, taking a candelabra from a table next to the fireplace
and removing one of the candles, putting it into a separate holder before
handing it to her. ‘The castle has been neglected for some time.’

Helena
looked at the thick dust
on the table and wondered how long it was since her aunt had left.

His cloak
stirred as it was caught by a draught, and it billowed around him as he set off
at a brisk pace across the hall. The candles were small haloes of light in the
gloom, revealing the dim outlines of suits of armour, plated and riveted in the
semblance of men, gleaming dully in the fading light. Their silver was darkened
with age and fantastic crests were embossed on their breast plates, whilst
above them hung weapons and shields. They had a sullen look about them, as
though they resented the fact they were no longer used, like savage animals
that had long since been caged.

Helena
turned her head away from
the warlike sight and looked straight ahead, but it was little better, for the
cavernous space was ominous and she felt suddenly very small. Above her, the
ceiling was too high to be seen. Lord Torkrow expected her to match his pace
and she had to run to keep up with him.

At the far end
of the hall they came to a massive stone staircase. The steps were wide and
shallow, worn to a hollow in the centre with the passage of countless feet, and
they led upwards into the darkness.

Lord Torkrow
began to climb, and
Helena
followed. Her legs felt like lead long before she reached the top, for the
steps were numerous, and she had already walked a long way that day. She paused
to rest at the top, but a curt: ‘Don’t dawdle,’ set her hurrying after the earl
again.