Read Castle of the Wolf Online 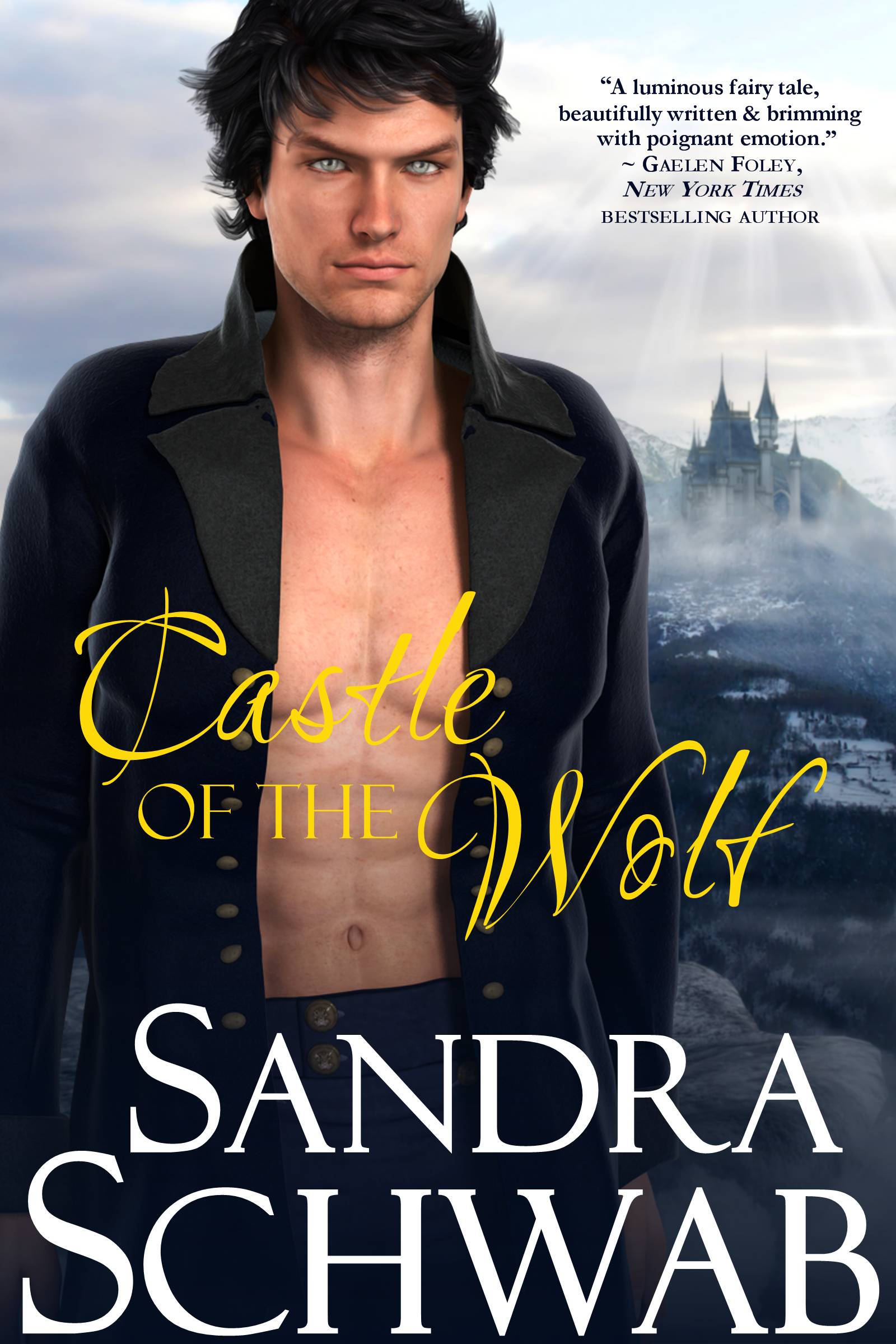 A Love for Every Season

This e-book is licensed for your personal enjoyment only. The e-book may not be re-sold or given away to other people. If you would like to share this book with another person, please purchase an additional copy for each person. If you’re reading this book and did not purchase it, or it was not purchased for your use only, please return it and purchase your own copy. Thank you.

All rights reserved. No part of this publication may be used, copied, or reproduced in any manner without written permission of the author except for the purpose of reviews.

This is a work of fiction. Names, characters, places, and incidents are either the product of the author’s imagination or are used fictitiously. Any resemblances to actual people or events are coincidental.

Celia Fussell's father was dead, and she was reduced to the status of a poor relation in the house of her brother - the new baron - and his shrewish wife. A life of misery loomed ahead.

But no, there was hope. Deep in the Black Forest was Cissy's inheritance. Among fir trees so dark they almost looked black, the Castle of Wolfenbach rose, a skeletal ruin adorned by gargoyles where even the locals feared to tread. It was a fortress of solitude, of secrets, of old wounds and older mysteries. But it was hers. And only one thing stood in her way: its former master, the hermit, the enigma - the man she was obliged to marry.

Will Celia manage to unravel the secrets of the castle and redeem the beast?

Find out in this delightful Beauty and the Beast story!

I wrote
Castle of the Wolf
over ten years ago, and the novel was first published by Dorchester in 2007. In this new edition, the text of the original remains unchanged—I merely corrected one or two continuity mistakes, got rid of some typos, and restored some phrasing that was lost during the copy editing process.

In loving memory of my grandfather, Karl Heinbuch,

who took me on so many walks through the Black Forest

when I was still a child.

The man was walking the ramparts while unseeing eyes followed his progress. Time moved sluggishly for them, and emotions dripped into them slowly. But through the years his despair had filled them, had saturated their very being. Now his desolation churned through them, grinding their hearts just as his.

Water poured from the skies and shrouded the world in gray. Raindrops drummed on the fold-back roof of the old gig, wormed their way through the ancient material and dripped onto the hats of the three passengers. Wetness glinted on the back of the shaggy mare and dye ran down her sides, leaving black oily puddles on the muddy country lane.

Huddled in one corner of the gig, her brother’s elbow digging into her side as he handled the reins, Miss Celia Fussell wiped another errant raindrop off her cheek. Her sister-in-law’s high-pitched complaints grated on her nerves.

“…could have decked the village in some more
noir
, if you ask me.” Dorinda had to speak quite loudly in order to be heard over the rain. “My dear Hailstone, will you look at that?”

Cissy grimaced. So quickly her sister-in-law had internalized the transition from Mr. Fussell to Hailstone. So quickly, so effortlessly…

“My dear Hailstone, I believe your poor sister is crying,” the nagging voice continued. “Are you crying,
me chère
? Did I not tell you that you had better stay at home? Such
énervement
is surely too much for your constitution. Now, of course, it is too late. But
me dieu
, what shall the people think?” Dorinda wrung her hands in artificial agitation.

What indeed?
Cissy ground her teeth.
Puffed-up peagoose!
Upon Dorinda’s insistence, the funeral had been postponed so they could send for crêpe, hat bands, and ostrich feathers from London. A hearse had to be built, the little gig painted black and the horses dyed.
Dyed
. Just so the funeral would be pompous enough for the Baron Hailstone.

As if her father had ever been pompous. A shy, bookish man, he had forever preferred the library to the world outside. A pompous funeral with ostrich feathers and mutes and shield bearers was the last thing he would have wanted.

“Hailstone, did I not tell you that your sister should stay at home? A funeral is no place for a woman. I, of course, have to be there. As the
nouveau
baroness I have to inspire new confidence and hope in
toutes les braves gens
.”

Another raindrop trickled down Cissy’s neck. “Be so kind and drive on, George,” she forced out between gritted teeth. “I assure you, I am perfectly fine.”

For a moment, her brother turned his round, red-cheeked face and soulful brown eyes to her. “If you say so, Cis.”

Forever the lost-puppy look
. Inwardly, Cissy sighed. “Don’t worry.” She patted his arm and wondered, not for the first time, what in all the world George saw in his wife. A thin, pale creature with a thin, sharp nose and affected airs, Dorinda Miller, the Widow Miller’s only daughter—but else of dubious parentage—had snatched up the baron’s son three years ago, soon after she had returned home from a convent in France.
Allegedly
from a convent in France. Her French was a disaster, her blond bouncing corkscrew curls the result of her skill with the curling tongs and probably with bleach, too. But, of course, George, sweet, apple-cheeked George, never saw beyond the carefully constructed façade.

Irritated, Cissy wiped her finger over the tip of her nose, while her sister-in-law’s whining voice droned on and on, all the long, long way from the manor house to the village church. The squelching wheels of the gig ploughed on through the mud, and the splash of the horse’s hooves sprayed dirt on shoes and clothes. Slowly, steadily, the rain flattened the bundle of ostrich feathers between the mare’s ears into an unruly second mane.

The wind picked up and made Cissy shiver, a harsh reminder that the golden days of summer were long gone—in more ways than one. She had to close her eyes for a moment as the pain threatened to overwhelm her. Never again would she find refuge from the world in her father’s arms. Never again would she press her face against his soft housecoat and inhale the reassuring scent of mild tobacco and dusty old books that clung to its folds, while his heart beat strongly and steadily under her ear. Never again would her father pat her cheek in his absent-minded manner and leave traces of black ink on her skin.

Cissy slowly inhaled and let her breath go in a heavy sigh.

And what would become of her now? The new baron’s spinster sister, a maiden aunt for his future children. She imagined a lifetime under one roof with Dorinda Miller, and a shudder tore through her.

“Cis?” Her brother’s worried voice cut through her bleak reverie. “Are you really all right?”

“Did I not tell you, Hailstone,” Dorinda repeated, “that your
sœur
had better stay at home?” Her black veil fluttered in the wind as she leaned forward to cast Cissy a disparaging look.

Abiding like the rain, the woman’s whining continued, and even in church it carried on, in whispers and muttered complaints. Trying to shut her out, Cissy stared straight ahead at her father’s coffin, which disappeared under black velvet.

Sent for from London, too.

It did not help that she could feel the disapproval radiating from the villagers. Disapproval not because the old baron’s funeral had been turned into a farce—no, they had even admired the stupid ostrich feathers, which the rain had transformed into broken, spiky things; had admired the rough-hewn hearse, the blotchy oily-black horses, the tiny old gig that stood in as mourning carriage. As if the attempt at a fashionable funeral somehow raised the importance of the village itself. But what the people, the men, disapproved of was the presence of two women at the funeral. Cissy could not help noticing the frowns, the deploring looks.

All at once, tears welled up in her eyes. She had so hoped they would understand her need to honor her father this last time. Instead, even the vicar shot her dark looks, his face stern and forbidding.

Later, when at last the coffin was lowered into the earth, they all stared at her as if they expected her to break down, to rave and rant against fate, which had stopped her father’s heart. Instead, she stood alone under her old umbrella, her eyes burning, and did not utter a sound. Dorinda, meanwhile, sniffed from time to time and prettily wiped her eyes behind her elegant black veil. She had snuggled up to George under his umbrella, the image of sad, sincerely desolate heirs.

To Cissy this sight seemed a vision of her future: standing alone and always apart from the new baron and baroness, forever condemned to a life as Miss Celia Fussell. She had no illusions in that respect. If her father had only been able to afford one London season for his daughter, then the new Baroness Hailstone would hardly agree to waste money on another stay in Town. Besides, how could Cissy ever hope to pass muster next to the young, fresh debutantes whose foreheads had never been touched by sorrow and whose mothers spent a fortune on their daughters’ dresses and shawls and gloves and reticules?

No, Cissy had no illusions: at twenty-seven, stranded in the north of England and thus far from any fashionable town or city, with no prospects of marriage, she was firmly on the shelf. When her father had still been alive, it had not seemed to matter. She had acted as his secretary and librarian; he had taught her Latin and Greek, French and German, and the beautiful languages of the Middle Ages so she could read all his favorite books to him. While he had not been able to afford real travels, he had taken her on the most wonderful journeys of the mind, had shown her the wild beauty of the old North, the mysteries of the Forest of Broceliande, the marvels of King Arthur’s court. Most of all, she remembered her father sitting in his worn armchair, puffing his pipe like a merry, oversized dwarf.

Cissy squeezed her eyes shut. “Cw
æ
don
þ
at he w
æ
re wyruld-cyninga, manna mildust and mon-
ð
w
æ
rust, leodum li
ð
ost…” she whispered.
They said that he was of all the world’s kings the gentlest of men and the most gracious, the kindest to his people…
Tears seeped from under her closed eyelids and rolled in a searing path down her cheek.

After the funeral, they drove back to the manor, retracing the deep grooves in the mud where the heavy hearse had crushed the wet earth down. And still rain fell, a fine gossamer of water and coldness, rendering the world gray and dreary. It seemed appropriate that even the land should be in mourning for the old baron.

Wolf Creek Enforcer by Jo Ellen
Sidney Chambers and the Perils of the Night by James Runcie
The Casting Couch by Amarinda Jones
The Blood of Heroes: The 13-Day Struggle for the Alamo--and the Sacrifice That Forged a Nation by Donovan, James
Chasing Atlantis by Coughlin, Kelly
Big Bad Easy by Whistler, Ursula
Secrets of the Wee Free Men and Discworld by Linda Washington
The Game Changer by L. M. Trio
Eleven Days: An Unexpected Love by Lora Lindy
The Last Painting of Sara de Vos by Dominic Smith