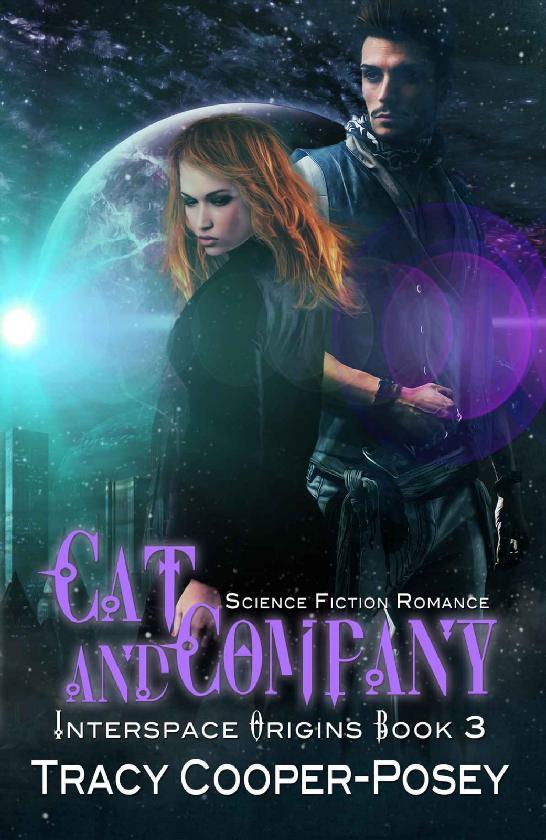 About Cat and Company

Praise for the Interspace Origins series

About
Cat and Company

Can Bedivere win Cat back?
Bedivere is trapped in a snare of drugs and violence, deep in the bowels of the galaxy, while Catherine works with Devlin Woodward, who campaigns tirelessly for Varkan rights. Devlin’s great deeds make him the most influential man in the known worlds.
When human and Varkan life is shattered by the emergence of the Periglus from the Silent Sector and their ruthless annexation of human worlds, Devlin’s Varkan allies may be the only people who can save the galaxy.
Can Bedivere claw his way back to civilization and win Catherine back, despite the Periglus, Devlin’s power and Bedivere’s own flawed humanity?
This book is part of the Interspace Origins science fiction romance series:
Book 1:
Faring Soul
(Award Winner)
Book 2:
Varkan Rise
Book 3:
Cat and Company

Praise for the Interspace Origins series

I know Tracy is a great writer but I was not much into science fiction. Well, now I am!!
I loved Catherine Shahrazad, who is a strong, in charge female.
I'm amazed by the creativity of not only the characters but the detail of sights, sound and interaction.
If you have read any of Tracy's other books you know what awaits you....sheer reading pleasure.
This is truly science fiction at its best.

Head of the Cartel on Soward.

The Birgir Stoyan was a shipmind that became aware during the early years of the Staff of Ammon purges. In response to the perceived threat of the Staffers, with no human to guide or direct it, the shipmind kills everyone aboard and escapes to an unknown location. It is the events of the Birgir Stoyan that consolidated the Staff of Ammon’s hold on human culture, directing human activities and thought for generations.

Undocumented reputation as the oldest person in the galaxy and direct descendant of Glave of Summanus.

Director of the Civil Obedience Bureau on Nicia (the gendarmerie)

President of the Oceania Securities Group and consultant investigator.

Former passenger aboard Catherine and Bedivere’s ship, originally from Soward

Mayor of the Celestial village on Charlton and Yennifer Charlton’s partner.

Created the mesh tether for Bedivere.

One of three Eistav (supreme commanders) of Cadfael College

Located at the far end of the Perseus arm, in the Aibos system, part of the Aibosian Cluster.

Cathain – the home world for the former Federation and the council.

Storth IV. Far out on the Perseus arm and close to the Last Gate in the Silent Sector.

What passes for fringe territories—high risk worlds (non-Terra) that no one goes to, but hold valuable resources that can be mined under the right circumstances.

Planet one light year beyond the Last Gate on the edge of the Silent Sector. Sixty percent beryllium ore. Only one colony on the planet.

Where the elite Ammonites (Staff of Ammon) enforcement cadre trained and lived.

The Federation council city within Cathain City. The inner, fortified city location for the Faring Federation.

What passes for fringe territories—high risk worlds (non-Terra) that no one goes to, but hold valuable resources that can be mined under the right circumstances.

Discovered mid-ninth millennium FY.
The tail end of the Outer Arm of the galaxy, where star systems are farther apart. Was once part of the Fringes. Now it is the only sector of the galaxy that people avoid, for ships go missing and those that do return come with strange stories. There are rumors that the remains of a long-gone alien race from a heavier world were found there.

Home of the Jourden Cartel, Kemp Rodagh and the best wine in the galaxy

The most recently colonized Terran style planet in the known worlds.

Home of Cadfael College. Cold Earth-like planet, mostly frozen. Third planet of the Gaios system, at the edge of the Galactic Bar, deep in the Federation Core.

Aliza = “Joyful.” Bedivere’s advanced ship that he uses for transporting people and freight.

Isaura Montanari is reputed to be Glave’s lover (possibly his wife) and his betrayer. Said to have lived in regret after Glave died. Wrote and preserved his teachings, a collection of stories and moral tales. Isaura’s work was lost during the Interregnum and the bible is a copy of heresy.

The Faithful of Mortal Divinity, through the College, influence everything. Civilization resumes post Interregnum, with the College providing education and directing the culture of the new, pure, humans. Children are supreme; the refreshing of the human gene pool is a priority.

High liner and commercial passenger carrier, one of the fastest in the galaxy.

Staffers on Egemon try to lynch Catherine Shahrazad as an imposter and for crimes against the scriptures of Glave. The city, however, is highly religious and Shahrazad treated with reverence. Th
e citizens turn on Staffers when they try to arrest Catherine, resulting in anarchy. No records exist of what happened to the Shahrazad and it is assumed she escaped during the civil uprising.

Faithful of Mortal Divinity, The

The guiding “religion” that emerges post-Interregnum, when humanity realizes that Glave’s Precepts were correct. Humanity becomes the new priority, with procreation the ultimate service to humankind.

Faring Year 1 is considered to be the year that wormhole gate technology was perfected and put into commercial use by the original corporation that would become the Faring Federation. All other dates are based on this reference.

An evangelist biologist living long before the Interregnum (circa mid-sixth millennium FY), during a time of extreme transhumanism and a slowing down of the human diaspora, known as “The Decline”.

The Folly by M. C. Beaton
Black Rabbit and Other Stories by Salvatore Difalco
Crushing Crystal by Evan Marshall
Cartography for Beginners by Jones, Jenna
Attack on the High Seas! by Brian James
The Secret Heiress by Judith Gould
The Derring-Do Club and the Year of the Chrononauts by David Wake
The Yearbook by Carol Masciola
Z. Raptor by Steve Cole
Without You: Book 1 of the Changing Hearts Series by Yesenia Vargas