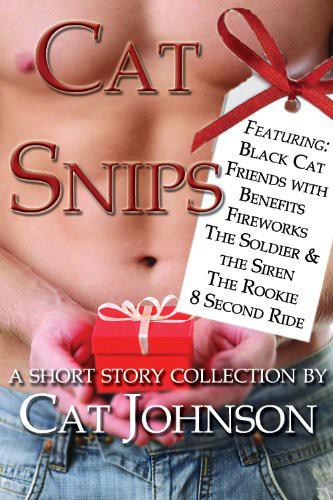 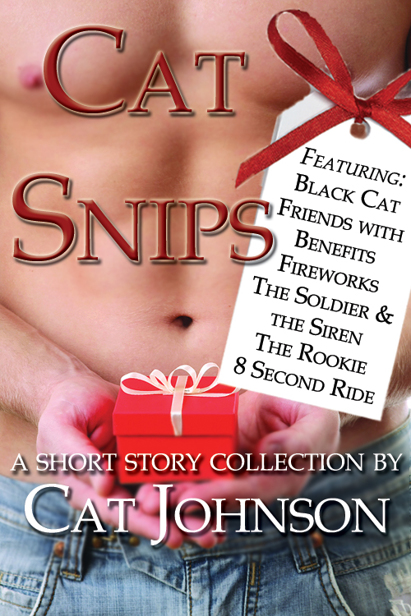 Lar has existed as a cat for a
thousand years, with all the discomforts and indignities that go
along with it. But when he’s adopted by Belinda and wakes up no
longer a cat, but as a man and in her bed, can his curse finally be
at an end? For more about the characters of Grace and Donna from
Black Cat
,
look for
Just Desserts
by Cat Johnson.

Meg
thinks she’s getting the best of both worlds when she and her
friend Jeff decide to start having sex with no strings attached,
until Meg suddenly finds that, strings or not, she’s become
attached to Jeff. The question is, does Jeff feel the same, or is
there a new woman in his life?

The
last thing Brad wants to do is attend leadership school over the 4th
of July holiday. How could the Army think it was a good idea to
schedule training in Georgia in July? When his roommate Joe suggests
they go see the fireworks and they run into Mary Jo, Joe’s
first love there, Brad soon realizes things are only going to get a
whole lot hotter. Especially once he discovers that Joe likes to
share.

The
Soldier and the Siren

After having his heart torn out
by a Dear John letter while deployed, David returns home without much
hope of things getting better. Then he heard her voice and his whole
world changed.

The
Rookie (a Studs in Spurs series deleted scene)

Young pro bull rider Chase Reese
learns a lesson about women the hard way, but makes a friend in the
process in this high energy, action packed 3,000 word single scene.
Written as a "thank you" to the fans of the Studs in Spurs
series who requested more of Chase. See more of Chase and his fellow
bull riders Slade and Mustang in the Studs in Spurs series by Cat
Johnson and don’t miss Chase’s book
Ride
(Studs in Spurs, Book 3).

This
eBook is licensed for your personal enjoyment only. This eBook may
not be re-sold or given away to other people. If you would like to
share this book with another person, please purchase an additional
copy for each recipient. Thank you for respecting the hard work of
this author.

The
Soldier and the Siren

The
Rookie (a Studs in Spurs series deleted scene)

Someone was singing, a woman.
Sweet and melodic.

Well, that settled it. He must be
in heaven. But then why did his head ache so? His arm too, now that
he thought about it. There shouldn’t be pain in heaven. Then
his blurred brain realized. He must be in hell.

It shouldn’t surprise him,
really. He was a warrior. Killing was part of his life. And even
though it was in the name of his king, killing was killing.
He remembered now the
battle that had finally ended his life. The sound of horses’
hooves thundering around him, vibrating his skull as he lay
helplessly on the cold October ground. The pungent mingled smells of
earth, sweat, and fresh blood, his own and that of others, increasing
the ever present throbbing in his head. Seeing from his vantage point
on the ground other bodies strewn across the field of battle. The
slow moving human vultures as they preyed upon the fallen, one by
one.

He had tried to push himself up
with his one arm that wasn’t broken, but his chain mail was too
heavy and his body too weakened from his injuries. Finally, accepting
his fate, he had simply closed his eyes. He’d said a quick
prayer as the blessed darkness took over and erased his pain…and
his life.

Now the pain was back. He was
surely in hell. So be it. If he were in hell, he would just have to
learn to live with it, so to speak.

But that still didn’t
explain the singing. He pried open one eye. Even just the light of
the flickering flame of the fire felt like a knife cutting through
his brain. If this pain were to be his fate for eternity, it would be
extremely unpleasant, to say the least.

His vision cleared enough for him
to take in his surroundings. Apparently hell, for him anyway, was a
small cottage filled with many cats and lots of herbs hanging from
the ceiling. A woman faced away from him, cooking something in a
cauldron over the fire in the hearth.

Odd. The priests who preached of
hell had mentioned fire and brimstone, but not this deceivingly
domestic scene. Although whatever the woman was cooking smelled like
it could only have originated in hell. He wrinkled his nose against
the foul odor.

She ceased her singing and
turned. “Ah, finally he wakes.” She came closer and
peered at him. One work-roughened hand grasped his chin so she could
angle his face toward the light.

“
Tell me my fate, oh
mistress of hell.” He squinted his eyes against the pain in his
head and noted that the neckline of her dress was cut so low he could
almost see the tops of her nipples. Hm? But of course, hell wouldn’t
be filled with virtuous women, now would it?

“
Mistress of hell? That’s
the thanks I get for saving your miserable life? I knew I should have
taken the fat ugly one instead. The pretty ones are never grateful.
Isn’t that right, Sebastian?” She seemed to be speaking
now to one of the cats. She cackled, seemingly amused at her own
jest, the meaning of which escaped him.

He tried to see past the agony in
his skull to get a better look at her. The only way to describe her
was…ageless. She didn’t seem young, but somehow she was
not old either. Definitely, she was not what he would define as
beautiful. Far from it. But yet, he found it impossible to look away.

Her eyes appeared as black as her
hair and he couldn’t break from their gaze.

Spellbound. That was how he felt.

She ladled some of the foul
smelling liquid she had been cooking into a small bone cup and used
her breath to cool it. Stronger than she looked, with one arm she
raised him easily into a sitting position on the bed and pressed the
cup to his lips. He drank, in spite of the fact he had no desire to
do so.

As he swallowed all of it, the
bitter evil brew had the strangest effect upon him. Suddenly, his
head no longer ached and his arm ceased its throbbing, feeling almost
as good as it had before he broke it in the battle. He was just
thinking that perhaps hell wasn’t going to be so bad when he
felt a familiar stirring between his legs. He watched in amazement as
the blanket covering his manhood rose. His face grew hot as his hands
instinctively moved to hide the source of his embarrassment.

The woman only nodded, looking
pleased. “Magic is strong during Samhain. My warrior is
stronger than I’d hoped. Isn’t he, Sebastian? Perhaps I
did pick the right one. And you know I do like them pretty.”
She laughed again and pulled the blanket from him, exposing his
nakedness. “Time to thank me for saving your life, warrior.”

He watched in horror, unable to
move as she raised her skirts and straddled him.

“
I’m not dead?”
he managed to croak as she grabbed him and began stroking,
intimately, almost lovingly.

“
Dead? No. You’re not
dead. But you are mine for as long as I wish it. So please me well
and live to see another day, warrior.” She turned to the cat
again, “Isn’t that right, Sebastian?”

The cat turned and walked away,
but the warrior could have sworn he saw a look of human sympathy in
its feline eyes.

He lay helpless, as if in a dream
world. And though his mind whispered that something was wrong, that
if he were really alive and well he needed to leave this strange
place and return to his men immediately, his cock beneath her touch
screamed for satisfaction far more loudly.

His mind and his body warred
until something snapped within him, something strong enough to fight
the effects of whatever was in what she had given him to drink.
Finding strength he didn’t think he had, he flung the woman off
of him and jumped to his feet. She landed on the floor with fire
shooting from her eyes. She rose slowly, her face suddenly hideous to
him as she mumbled words in a language he didn’t understand.

Her chant grew louder and
stronger until it seemed to vibrate the very walls of the cottage.
Clay pots fell off shelves while the cats scattered for shelter. Then
a pain tore through him the likes of nothing he had ever felt before
and he heard a blood curdling scream rip through the air.

He realized the scream was his
own as he fell and writhed on the floor.

Then, just as suddenly as it had
come, the pain was gone and he could stand again. He rose on four
fur-covered feet and stood, eye-to-eye, with Sebastian.

“
What have you been doing
to yourself, Belinda? Girl, you’ve got more knots in your
shoulders than are listed in the Boy Scout handbook.”

Belinda lay face down on the
masseuse table as Gene worked on a particularly painful muscle. “I
haven’t done anything to myself.”

“
Well, knots like these
don’t come around all by themselves. There’s something
going on with you. Did you stop using two pillows and only sleep with
one, the way I told you last time you were here?”

“
Yes,” she mumbled
into the head support that was shaped disturbingly like a toilet
seat.

“
And have you started
alternating which shoulder you carry your purse?”

“
Um. Yeah.” Boy, she
was a bad liar. She didn’t even believe herself.

“
Liar.” Apparently,
neither did Gene. But since he was the top masseuse at one of the top
spas on the east coast, she should probably listen to what he had to
say. Or at least feel guilty when she didn’t.

“
Okay. No, I didn’t.
But I just can’t switch. It’s more than habit. My bag
falls off my shoulder if I try to put it on the other side. But I did
empty out everything that wasn’t absolutely necessary and now
it’s much lighter. I swear.” Why did she feel like she
was ten years old and had been called into the principal’s
office?