Authors: The Cricket on the Hearth 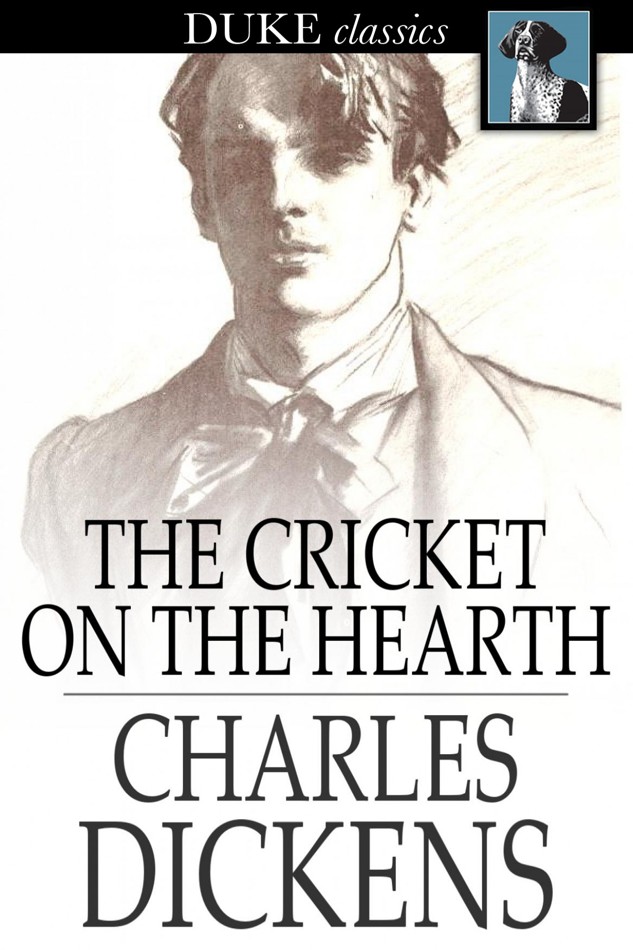 As if the clock hadn't finished striking, and the convulsive little
Haymaker at the top of it, jerking away right and left with a
scythe in front of a Moorish Palace, hadn't mowed down half an acre
of imaginary grass before the Cricket joined in at all!

Why, I am not naturally positive. Every one knows that. I
wouldn't set my own opinion against the opinion of Mrs.
Peerybingle, unless I were quite sure, on any account whatever.
Nothing should induce me. But, this is a question of act. And the
fact is, that the kettle began it, at least five minutes before the
Cricket gave any sign of being in existence. Contradict me, and
I'll say ten.

It appeared as if there were a sort of match, or trial of skill,
you must understand, between the kettle and the Cricket. And this
is what led to it, and how it came about.

Mrs. Peerybingle, going out into the raw twilight, and clicking
over the wet stones in a pair of pattens that worked innumerable
rough impressions of the first proposition in Euclid all about the
yard—Mrs. Peerybingle filled the kettle at the water-butt.
Presently returning, less the pattens (and a good deal less, for
they were tall and Mrs. Peerybingle was but short), she set the
kettle on the fire. In doing which she lost her temper, or mislaid
it for an instant; for, the water being uncomfortably cold, and in
that slippy, slushy, sleety sort of state wherein it seems to
penetrate through every kind of substance, patten rings included—
had laid hold of Mrs. Peerybingle's toes, and even splashed her
legs. And when we rather plume ourselves (with reason too) upon
our legs, and keep ourselves particularly neat in point of
stockings, we find this, for the moment, hard to bear.

Besides, the kettle was aggravating and obstinate. It wouldn't
allow itself to be adjusted on the top bar; it wouldn't hear of
accommodating itself kindly to the knobs of coal; it WOULD lean
forward with a drunken air, and dribble, a very Idiot of a kettle,
on the hearth. It was quarrelsome, and hissed and spluttered
morosely at the fire. To sum up all, the lid, resisting Mrs.
Peerybingle's fingers, first of all turned topsy-turvy, and then,
with an ingenious pertinacity deserving of a better cause, dived
sideways in—down to the very bottom of the kettle. And the hull
of the Royal George has never made half the monstrous resistance to
coming out of the water, which the lid of that kettle employed
against Mrs. Peerybingle, before she got it up again.

It looked sullen and pig-headed enough, even then; carrying its
handle with an air of defiance, and cocking its spout pertly and
mockingly at Mrs. Peerybingle, as if it said, 'I won't boil.
Nothing shall induce me!'

But Mrs. Peerybingle, with restored good humour, dusted her chubby
little hands against each other, and sat down before the kettle,
laughing. Meantime, the jolly blaze uprose and fell, flashing and
gleaming on the little Haymaker at the top of the Dutch clock,
until one might have thought he stood stock still before the
Moorish Palace, and nothing was in motion but the flame.

He was on the move, however; and had his spasms, two to the second,
all right and regular. But, his sufferings when the clock was
going to strike, were frightful to behold; and, when a Cuckoo
looked out of a trap-door in the Palace, and gave note six times,
it shook him, each time, like a spectral voice—or like a something
wiry, plucking at his legs.

It was not until a violent commotion and a whirring noise among the
weights and ropes below him had quite subsided, that this terrified
Haymaker became himself again. Nor was he startled without reason;
for these rattling, bony skeletons of clocks are very disconcerting
in their operation, and I wonder very much how any set of men, but
most of all how Dutchmen, can have had a liking to invent them.
There is a popular belief that Dutchmen love broad cases and much
clothing for their own lower selves; and they might know better
than to leave their clocks so very lank and unprotected, surely.

Now it was, you observe, that the kettle began to spend the
evening. Now it was, that the kettle, growing mellow and musical,
began to have irrepressible gurglings in its throat, and to indulge
in short vocal snorts, which it checked in the bud, as if it hadn't
quite made up its mind yet, to be good company. Now it was, that
after two or three such vain attempts to stifle its convivial
sentiments, it threw off all moroseness, all reserve, and burst
into a stream of song so cosy and hilarious, as never maudlin
nightingale yet formed the least idea of.

So plain too! Bless you, you might have understood it like a book-
-better than some books you and I could name, perhaps. With its
warm breath gushing forth in a light cloud which merrily and
gracefully ascended a few feet, then hung about the chimney-corner
as its own domestic Heaven, it trolled its song with that strong
energy of cheerfulness, that its iron body hummed and stirred upon
the fire; and the lid itself, the recently rebellious lid—such is
the influence of a bright example—performed a sort of jig, and
clattered like a deaf and dumb young cymbal that had never known
the use of its twin brother.

That this song of the kettle's was a song of invitation and welcome
to somebody out of doors: to somebody at that moment coming on,
towards the snug small home and the crisp fire: there is no doubt
whatever. Mrs. Peerybingle knew it, perfectly, as she sat musing
before the hearth. It's a dark night, sang the kettle, and the
rotten leaves are lying by the way; and, above, all is mist and
darkness, and, below, all is mire and clay; and there's only one
relief in all the sad and murky air; and I don't know that it is
one, for it's nothing but a glare; of deep and angry crimson, where
the sun and wind together; set a brand upon the clouds for being
guilty of such weather; and the widest open country is a long dull
streak of black; and there's hoar-frost on the finger-post, and
thaw upon the track; and the ice it isn't water, and the water
isn't free; and you couldn't say that anything is what it ought to
be; but he's coming, coming, coming! -

And here, if you like, the Cricket DID chime in! with a Chirrup,
Chirrup, Chirrup of such magnitude, by way of chorus; with a voice
so astoundingly disproportionate to its size, as compared with the
kettle; (size! you couldn't see it!) that if it had then and there
burst itself like an overcharged gun, if it had fallen a victim on
the spot, and chirruped its little body into fifty pieces, it would
have seemed a natural and inevitable consequence, for which it had
expressly laboured.

The kettle had had the last of its solo performance. It persevered
with undiminished ardour; but the Cricket took first fiddle and
kept it. Good Heaven, how it chirped! Its shrill, sharp, piercing
voice resounded through the house, and seemed to twinkle in the
outer darkness like a star. There was an indescribable little
trill and tremble in it, at its loudest, which suggested its being
carried off its legs, and made to leap again, by its own intense
enthusiasm. Yet they went very well together, the Cricket and the
kettle. The burden of the song was still the same; and louder,
louder, louder still, they sang it in their emulation.

The fair little listener—for fair she was, and young: though
something of what is called the dumpling shape; but I don't myself
object to that—lighted a candle, glanced at the Haymaker on the
top of the clock, who was getting in a pretty average crop of
minutes; and looked out of the window, where she saw nothing, owing
to the darkness, but her own face imaged in the glass. And my
opinion is (and so would yours have been), that she might have
looked a long way, and seen nothing half so agreeable. When she
came back, and sat down in her former seat, the Cricket and the
kettle were still keeping it up, with a perfect fury of
competition. The kettle's weak side clearly being, that he didn't
know when he was beat.

There was all the excitement of a race about it. Chirp, chirp,
chirp! Cricket a mile ahead. Hum, hum, hum—m—m! Kettle making
play in the distance, like a great top. Chirp, chirp, chirp!
Cricket round the corner. Hum, hum, hum—m—m! Kettle sticking to
him in his own way; no idea of giving in. Chirp, chirp, chirp!
Cricket fresher than ever. Hum, hum, hum—m—m! Kettle slow and
steady. Chirp, chirp, chirp! Cricket going in to finish him.
Hum, hum, hum—m—m! Kettle not to be finished. Until at last
they got so jumbled together, in the hurry-skurry, helter-skelter,
of the match, that whether the kettle chirped and the Cricket
hummed, or the Cricket chirped and the kettle hummed, or they both
chirped and both hummed, it would have taken a clearer head than
yours or mine to have decided with anything like certainty. But,
of this, there is no doubt: that, the kettle and the Cricket, at
one and the same moment, and by some power of amalgamation best
known to themselves, sent, each, his fireside song of comfort
streaming into a ray of the candle that shone out through the
window, and a long way down the lane. And this light, bursting on
a certain person who, on the instant, approached towards it through
the gloom, expressed the whole thing to him, literally in a
twinkling, and cried, 'Welcome home, old fellow! Welcome home, my
boy!'

This end attained, the kettle, being dead beat, boiled over, and
was taken off the fire. Mrs. Peerybingle then went running to the
door, where, what with the wheels of a cart, the tramp of a horse,
the voice of a man, the tearing in and out of an excited dog, and
the surprising and mysterious appearance of a baby, there was soon
the very What's-his-name to pay.

Where the baby came from, or how Mrs. Peerybingle got hold of it in
that flash of time,
I
don't know. But a live baby there was, in
Mrs. Peerybingle's arms; and a pretty tolerable amount of pride she
seemed to have in it, when she was drawn gently to the fire, by a
sturdy figure of a man, much taller and much older than herself,
who had to stoop a long way down, to kiss her. But she was worth
the trouble. Six foot six, with the lumbago, might have done it.

'Oh goodness, John!' said Mrs. P. 'What a state you are in with
the weather!'

He was something the worse for it, undeniably. The thick mist hung
in clots upon his eyelashes like candied thaw; and between the fog
and fire together, there were rainbows in his very whiskers.

Inside Out by Mason, Nick
Foreigner: (10th Anniversary Edition) by C. J. Cherryh
Falling Sky by Lisa Swallow
Only the Gallant by Kerry Newcomb
Grace (The Family Simon Book 5) by Juliana Stone
Out of Position by Kyell Gold
Veil of Night by Linda Howard
Toeing the Line (The Complete Serial) by Allyson Lindt
The Time Baroness (The Time Mistress Series) by Georgina Young-Ellis
Clarkton by Howard Fast