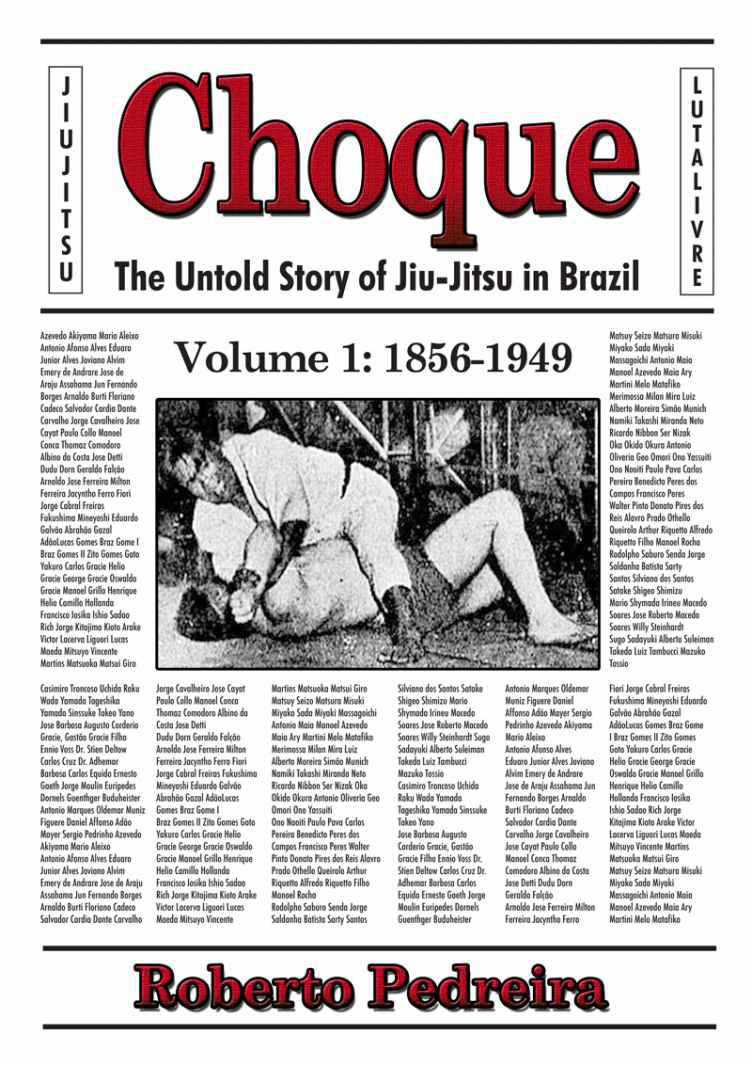 The Untold Story of Jiu-Jitsu in Brazil

To those who are about to rock.

Epilogue:
T
he Past and Future of Jiu-Jitsu

Choque: The Untold Story of Jiu-Jitsu in Brazil
(hereafter
Choque
) began as a short historical introduction to
Jiu-Jitsu in the South Zone 1997-2008
. After writing 60 pages I realized that I hadn’t included a single concrete, specific, reliably referenced fact for anything that happened before 1951. The limited information available was uniformly of questionable quality, and was almost entirely marketing and advertising materials for one particular school or another. The combination of misinformation, dubious sources, gaps, and contradictions, made it difficult to write a historical introduction.

The occasional exception was suggestive rather than reliable. In a series of articles written between 1997 and 2008 and published between 2000 and 2008,
The Global Training Report
(GTR) internet site provided some alternatives to the prevailing view. But GTR did not claim to be authoritative. GTR simply reported what its representative, Robert Pedreira (the author of
Jiu-Jitsu in the South Zone
and
Choque
, saw, read, and was told while in Brazil between 1997 and 2008. No one was trying to deceive him. They simply didn’t have the answers. In most cases they didn’t care.

With rare exceptions, the source of almost all available information was the same in every case. That was Rorion’s Gracie’s “documercial” (a commercial disguised as a documentary), known as
Gracies in Action
in two volumes, released in 1988 and to a lesser degree Pat Jordan’s 1989
Playboy
article on Rorion Gracie. The handful of articles written in Brazil addressing history were written after UFC 1 in 1993. They were unavoidably influenced by Rorion Gracie’s version of events, primarily because it was the only version there was. In most cases, they had no other sources of information. At least one individual with first-hand knowledge regarded the story as fantasy. Others disagreed with particular aspects of the story, mainly in the matter of who should get credit for what.

The only way to find out the truth about jiu-jitsu in
Brazil was to go back to independent sources, and as far back as the sources went. That is what
Choque
is about.
1

Choque
is organized chronologically rather than thematically. Rather than focusing on a particular event or individual, it describes everything of relevance within every year between 1856 and 1949, with the following exceptions. Chapter 1 treats the period from 1856 to 1899. During this period, organizational structures, venues, expectations, and cultural practices were established. They included the novel European concepts of “leisure”, “family entertainment”, “sport” and “physical culture”, among others. Essential forms of media, transportation, and technology evolved. Slavery was abolished (May 13, 1888) and the First Republic was created (November 15, 1889) which contributed to the formation of an incipient middle-class with modest amounts of disposable income, which stimulated the growth of professional fighting as one form of spectator entertainment. Certain individuals who would play major roles in the later evolution of the business of professional jiu-jitsu appeared. Paschoal Segreto was foremost among those.

Chapter 2 delves more specifically into this topic, which is absolutely essential for understanding what followed. Chapter 3 deals with the rise and fall of the first jiu-jitsu representative in
Brazil, in 1909. He was Sada Miyako. Chapter 4 focuses on the period 1910-1913, when jiu-jitsu was an obscure and little-practiced amateur sport championed by an
esgrimista
[fencer] named Mario Aleixo. Chapter 5 deals with Mitsuyo Maeda (more commonly called Conde Koma in Brazil) and his first “troupe” of jiu-jitsu fighters in São Paulo in 1914. Chapter 6 deals with Conde Koma and his second troupe in Rio in 1915. Chapter 7 treats the period from 1915 to 1927, up to the arrival of the next Japanese master, Geo Omori.

After chapter 7, all subsequent chapters focus on periods of a single year (the one exception being chapter 22, the war years (1942-1945), in which for obvious reasons, professional sports and entertainment were curtailed or modified to meet the objectives of the war effort.

Appendix 1 lists every known jiu-jitsu representative in Brazil between 1856 and 1949, as well as all of their opponents from rival styles (including those who did not have a style). The list also includes important promoters, managers, writers, organizations, referees, and the names and addresses of major venues, gyms, and academies.

Appendix 2 provides a list of all known and confirmed contests between jiu-jitsu representatives and any other stylist. Contests that were announced before and on the scheduled day, but no report of a result has been found, are included as “unconfirmed”.

Appendix 3 attempts to reconstruct lineages of teachers and students.

Appendix
4 is a historical glossary, containing words used between 1856 and 1949 to describe jiu-jitsu and other fighting techniques, and other relevant terminology.

The epilog
ue sums up the story in very general terms and sets the stage for
Choque: The Untold Story of Jiu-Jitsu in Brazil, Volume 2 1950-1999
.

S
ources are provided in the Notes section. Substantive notes are also included.

The Illustrations section contains newspaper clippings from 1879 to 1922 and after.

E-books do not have page numbers, but readers can find most of what they need by using Appendices 1 and 2 and then referring to the appropriate chapter. The print version of
Choque
contains a conventional, old-school index.

Some readers may feel that
Choque
contains too much information and too much detail. It is true that there are copious amounts of both. That was a deliberate decision. In view of how little reliable factual information there is on the subject, I resolved to include everything of potential interest for the benefit of future researchers. Much of the detail and specifics (including most of the original Portuguese material) is contained in the notes section. Readers who do not need this information or level of detail can feel free to ignore it.

Spelling in Brazilian newspapers was erratic, and essentially a matter of personal preference. There was no national standard, particularly before 1943, and the earlier we look, the more idiosyncratic the spelling appears. Newspapers had their own spelling conventions and sometimes asked their readers what they preferred. One newspaper conducted a survey in March of 1940, offering a chance to win a 6-valve Fada radio in a lottery, for readers who would say whether or not they preferred a newer simplified orthography.
2
The result revealed that a majority (75%) preferred a simplified orthography, which the newspaper adopted from April 16.
3

In some cases, or many, no one really knew how a name was spelled, and it might be written two or three or more different ways in the same article (and still other ways in headlines and photo captions). I made no attempt to modernize or standardize spellings, especially names, where in many cases there probably was no one correct spelling. The selections quoted are reproduced as they were originally printed, including errors, as it is generally impossible to distinguish between errors and the normal spelling style of the time. Exceptions are when the meaning of the content is significantly altered or unintelligible. In those cases, I provided a clarifying note, if possible, or the legend [
sic
], meaning “that’s the way it was”.

T
he conventions of international copyright law and the
Lei de Direito Autoral (Lei 9.610 de 19 de fevereiro de 1998
) have been observed in reproducing photographs that might conceivably still be protected by copyright, or whose status is unascertainable.