Read Cinderella in the Surf Online

Cinderella in the Surf 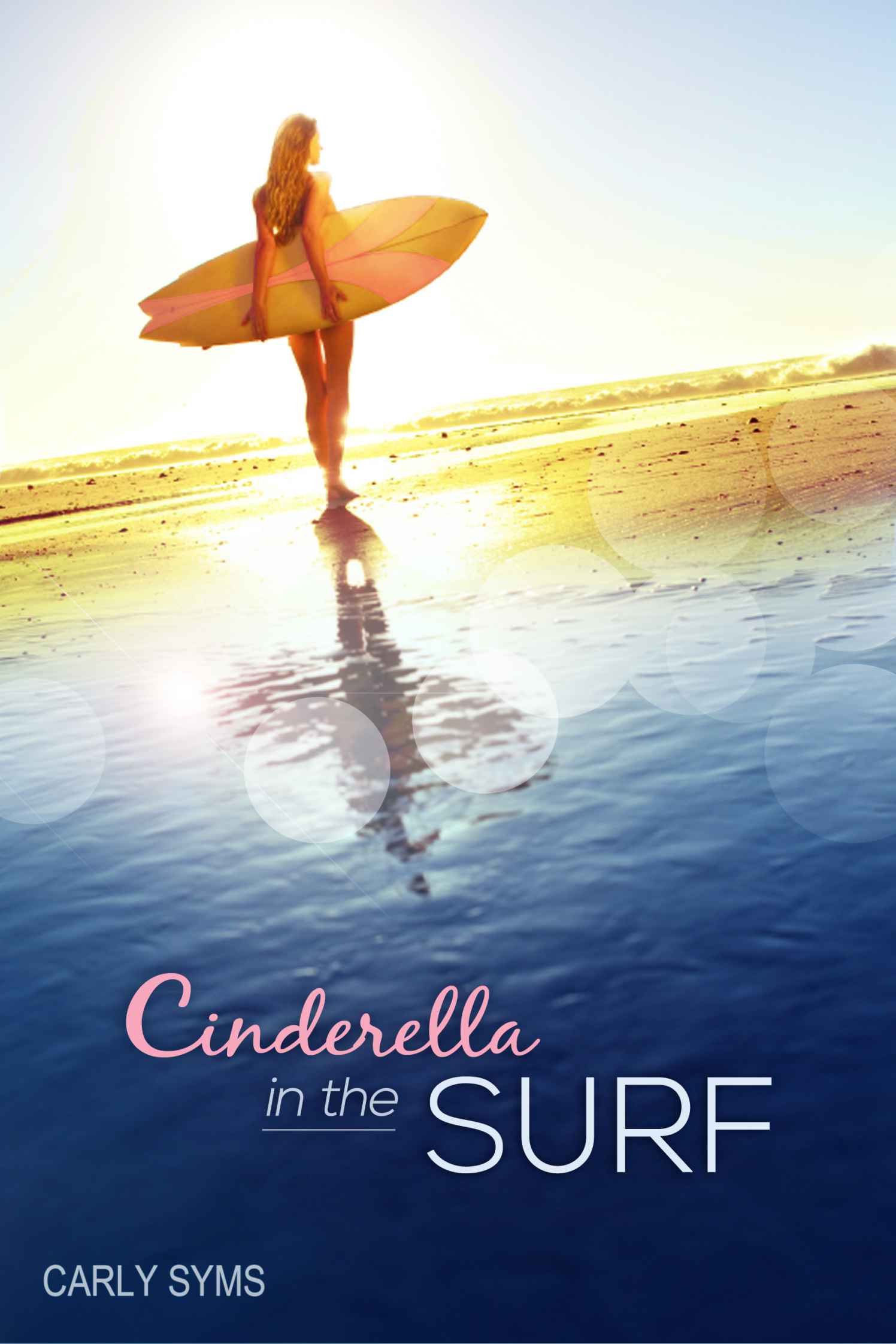 To those who are no longer with us.

Cinderella in the Surf

All events are a work of the author's imagination. Any Any resemblance to any people and events is purely coincidental.

The frisbee slams into my face with so much force I'm pretty sure my eyeball is rolling around somewhere on the sand.

At worst, I'm gonna need to invest in an eyepatch. At best, I'll be covering up one heck of a bruise tomorrow morning.

It takes a second for the fog to lift out of my brain so I can figure out what's going on, but I'm pretty sure the pink disc now resting harmlessly in the sand next to my feet is the culprit.

I reach down and pick it up, then scan the beach for whoever it is that needs to work on their aim.

I don't have to look very hard.

I'm staring at the guy who's now standing in front of me, hand over his mouth, eyes wide.

"Oh, dang," he breathes when he gets a good look at my face, and I have to tell you, this doesn't exactly fill me with confidence.

I take a good look at him and feel my eyebrows shoot up. He's probably a little bit older than me, college-aged if I had to guess, and has short, buzzed blonde hair, green eyes and a surfer's tan.

But the hint of accent in his voice tells me one thing for sure -- he's definitely not from these parts of Southern California.

Maybe that explains his total lack of frisbee skills.

He's dressed in white shorts, a red T-shirt and tan work boots, but everything he's wearing is covered in a rainbow of bright paint splotches.

"Uh," he hesitates, biting down on his lip and looking like he wishes scientists had gotten their crap together and figured out the whole teleportation thing by now. "You know, I've seen worse."

"Well, great. As long as I'm a step up from the worst you've ever seen, we're all good here."

He laughs. "Nothin' some ice won't fix up. I'm working on a building up the beach. I'll get some for you."

"No offense, but I'm the one lookin' at your face right now, and you're gonna want something cold on that pretty fast."

I sigh, my quiet afternoon on the beach already fading far from view as I climb to my feet. He reaches out a hand to help me up, but I'm already standing by the time I notice it.

He smiles and starts to walk up the beach when we hear shouting.

He turns and looks at the group of guys he'd been throwing it around with and takes it out of my hand. He sails the frisbee back in their direction, and they return to their game, hopefully with a little bit more finesse this time.

"So, are you lost?" he asks me, and I frown, not sure I've heard him right. Lost? I live on this beach. What's he talking about?

"What? What kind of question is that?"

His green eyes shimmer before he shrugs. "Dunno," he says, and the southern drawl I thought I heard before is much more noticeable now. "I've been watching you out here for the last half hour and you haven't done anything. Most people at least got somethin' they do on the sand. Music or a book or who knows what. But not you."

I don't know how long I've been sitting outside today, watching the waves roll into shore, steady and rhythmic, fluid and dependable. They're calm today -- easy -- the way I'm used to seeing them.

Not at all how they were the last time I was in the ocean.

I've been trying to get better about losing track of time, but it looks like I've let it get away from me again.

I reach into my bag and pull out a copy of the book I'd tossed in there this morning, even while knowing full well I won't crack its spine today.

"Satisfied?" I ask, waving it in front of his face.

"But you weren't reading."

"What're you doing out here then?"

I glance at the ocean behind us, then back at him. I take my time thinking about his question. He doesn't need to know the truth; not all of it, anyway.

"Watching the water," I tell him, and I'm proud of myself because this isn't a lie.

"Yeah." We're walking toward the boardwalk now. "Where are we going?"

"We're painting a pizza place on Gull," he says, pointing to a strip of buildings on the other side of the street that lines the beach. That explains the rainbow on his clothes. "We were supposed to go all afternoon, but the boss had to bail, so we grabbed the frisbee."

He looks over at me. "Walker," he says, wiping his palms on the front of his white shorts before holding his hand out to me. "Walker Gracin."

"Walker, who has really crappy aim with a frisbee," I say, but I don't take his hand. He looks down at it, gives a small shrug, and stuffs his palms into the pockets of his shorts.

Maybe it's rude of me; in fact, I know it's rude of me, but I don't get close to people, not anymore. Touching him feels like too much of a connection.

"Actually, I don't think you've said sorry at all."

He looks at me like I've slapped him, so I offer a half-smile to show I'm mostly joking.

"I'm really sure I'll be fine waiting until I get home to grab some ice," I say when the silence hits awkward levels. "I live right up the beach. You don't have to take pity on me because you hit me in the face."

He laughs, but it's high-pitched, and I'm pretty sure he's nervous. "That's not what I'm doing. Your eye just looks like it needs some work."

"You look lonely," he says out of nowhere, and I shudder at his words and at what feels like a plunge in the temperature even though I don't know this guy and what he says about me shouldn't mean a damn thing.

But he isn't wrong.

"Are we far from the pizza place?" I ask.

"It's just up the street," he says as we reach the boardwalk. "We can cross here."

"Do you live out here?" I ask when his accent becomes too much for my curiosity to ignore. I've never heard anyone talk like he does if they're native to the beach.

Plus, it's rare, at least for me, to meet someone out here who doesn't disappear by the end of the week. There are a lot of hit-and-runs, so to speak, in this town.

Walker shrugs again. "Kind of, yeah. For the summer, anyway."

"My uncle owns the painting business that's working on the pizza joint. My parents thought I should get away from home and help out."

He pushes open the door to Johnny's, one of my favorite downtown restaurants, despite the closed sign hanging out front, and we step cautiously around ladders and drop cloths and open, half-empty paint cans, and into the back where he rummages around for a cup and some ice.

"Where are you from?" I ask, hoisting myself up onto the counter.

"When did this turn into an interrogation of me?" he asks, but he's smiling, that same glimmer still in his eyes. "I'm just messin' with you. I'm from Tennessee."

So that explains the whole twang thing.

He snorts like there's a joke here but I'm not lucky enough to be included. "Something like that."

I watch as he digs a cup out of a cardboard box and walks over to the ice machine. I wait to see if he'll continue.

Walker pinches the bridge of his nose between his index finger and his thumb, and suddenly I'm ready to run right out of here because I'm obviously hitting some kind of nerve with this guy.

But then he looks over at me and I frown when I catch sight of the smile creeping back onto his face, even though it doesn't reach his eyes.

"I don't even know you and already I can see you're a piece of work."

It's not what I'm expecting him to say, and I'm tempted to ask him who he is to talk to me like this, because what kind of guy smacks a girl in the face with a frisbee, then tells her she's a pain in his butt?

The kind from Tennessee, apparently.

And I'm not so sure what to make of this.

But even more, what kind of girl is actually sorta intrigued by it all?

"I should be going," I say, pushing myself to my feet.

"Wait. The ice. Get back on the counter."

I let out a sigh, but do as he says, mostly because I'm not interested in looking like I lost a battle with my fist tomorrow morning.

He walks over and then he's standing right in front of me, a cup of ice in one hand and a bunch of paper towels in the other.

He wraps up some cubes and presses the towel-wrapped ice gently against the skin right under my eye.

"Yikes," I exclaim, quickly whipping my head away from him. "That's cold."

Walker reaches out and tilts my face back so it's facing him, and I'm suddenly sucking in my breath and intensely aware of every inch of myself -- and every inch of him.

I let him hold the ice against my cheek for a few minutes until the silence becomes too much and I feel an urgent, overwhelming need to get the heck out of here.

I push him back by the chest and stand up, gathering my bag and not looking up at his face.

"Take this with you." He holds the damp towels out to me.

"I'm sorry about your face."

"I really do have to leave."

I hear him sigh. "It was nice meetin' you, miss," he says, his drawl even thicker now.

"Miss?" I wrinkle my nose. It doesn't sound right, not even coming from a southern guy like him.

I'm about to introduce myself when something -- I don't know what -- stops me, and I turn to leave.

"See you around," I tell him instead.

I hurry out of Johnny's, a familiar place that doesn't feel so familiar anymore.

But for some reason, I know what I've said to him is true.

I walk home along the shoreline, close enough to the wet sand that the water sprays my ankles when each wave rolls in, but not so near that the ocean rushes over to me and pools around my body. I don't want to feel it envelop me completely.