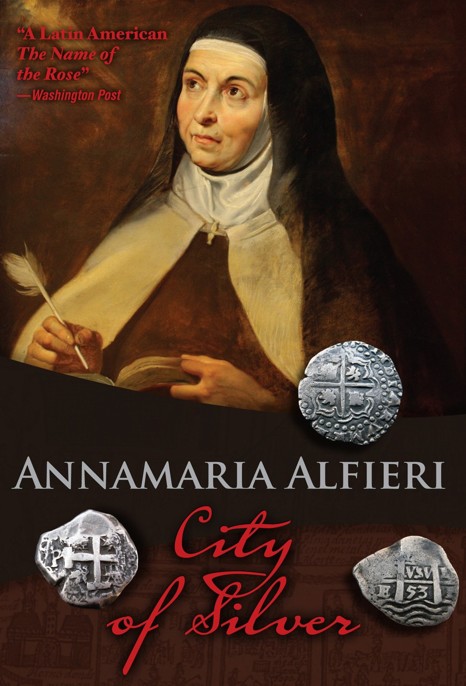 This is a work of fiction. All of the characters, organizations, and events portrayed in this novel are either products of the author’s imagination or are used fictiously.

Toni Plummer, my editor, and Nancy Love, my agent, for making this happen; Robert Knightly, the best writing buddy ever; Katherine Hogan Probst, Ph.D., life-long friend, and Latin scholar; and especially Steve Strobach and Naty Reyes, who took me to Potosí.

THOUGH THE CHARACTERS and plot of this story are fictional, the background history and the city of Potosí are real. In 1650, as part of the Spanish Viceroyalty of Peru, it was the largest city in the Western Hemi sphere, with a population equal to that of London. In 1987, UNESCO declared Potosí a Patrimonio de la Humanidad (Patrimony of Humanity). Its glorious architectural masterpieces, which are the scenes of this novel, still exist. Many of them have been lovingly restored and can be visited in this, the world’s highest city, at an altitude of more than 4,000 meters (more than 13,000 feet), in what is now Bolivia.

THE CITY OFFICIALS OF POTOSÍ

Felipe Ramirez,
Tester of the Currency

Jerónimo Antonio Taboada,
member of the Cabildo, ally of Morada

Juan Téllez,
member of the Cabildo, ally of Morada

Domingo Barco,
Mayordomo of the Ingenio Tovar (mine and smelting works)

Rosa,
his wife, cook in the Tovar household

IN THE CONVENT OF SANTA ISABELLA DE LOS SANTOS MILAGROS

Sor Eustacia,
Sister of the Order

THE MEN OF THE CHURCH

Fray Ubaldo DaTriesta,
local Commissioner of the Holy Tribunal of the Inquisition

Those who think it is not easy for a woman to succeed in whatever she attempts are mistaken, for many women have surpassed men in valor, in use of arms, and in knowledge
.

A man who has acquired great wealth through excessive greed, taking advantage of the sweat of the poor, might better have met his obligations
.

Peace is the offspring of Justice, and one cannot obtain where the other is not meted out
.

SANTIAGO YANA APPROACHED the mine by night. He had climbed the steep, winding path worn smooth over a hundred years by the hooves of llamas and mules and the barely shod feet of thousands of Indians like himself. Up the Cerro Rico in the weak gray light of the waning moon. His barrel chest heaved. He gulped the icy, rarefied air. Below, the great stone-and-stucco city of Potosí sprawled out at the base of this silver mountain, like the train on a Spanish woman’s gown. On the near side of the river, an occasional torch flickered in the yards of the refineries. Across, in the grid of streets surrounding the central plaza, dull candlelight glowed in the windows of the many rich houses. Spaniards burned wax as if it were cheap as stones.

Santiago paused at the mouth of the mine. Always before, he had gone down in daylight, with his comrades. Standing shoulder to shoulder among them, he sensed himself as part of one large animal, a beast courageous enough to descend the deep main shaft. At the bottom, he became a digit on that powerful creature’s hand, making it possible for him to thread himself
through the tight, dusty tunnels and, in the gloom and the din of iron banging on stone, to tear away chunks of silver to be refined and sent to the King of Spain.

The Autobiography of James T. Kirk by David A. Goodman
MMA Romance: Path to Submission by T. A. Lesner
The Reunion Show by Brenda Hampton
Extreme Exposure by Pamela Clare
Jealous in July (Spring River Valley Book 7) by Wynter, Clarice
The Jade Boy by Cate Cain
Urban Venus by Downing, Sara
Galapagos Regained by James Morrow
The Greatness Guide: One of the World's Most Successful Coaches Shares His Secrets for Personal and Business Mastery by Sharma, Robin
Atone by Beth Yarnall