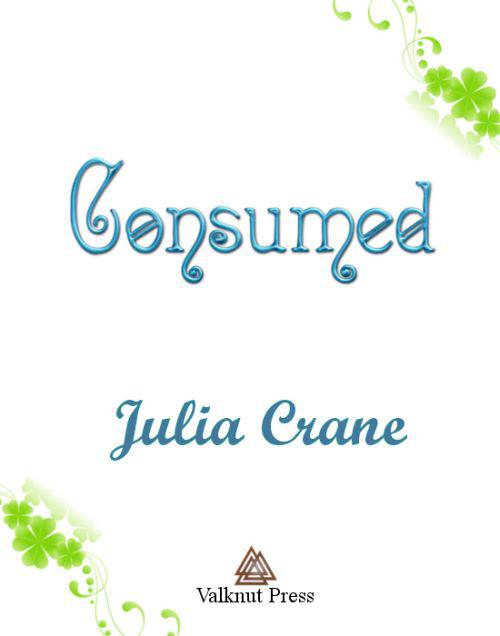 This book is protected under the copyright laws of the United States of America. Any reproduction or other unauthorized use of the material or artwork herein is prohibited. No part of this book may be used or reproduced in any manner whatsoever without prior written permission of the author.

This novel is a work of fiction. Any references to historical events; to real people, living or dead; or to real locales are intended only to give the fiction a sense of reality and authenticity. Names, characters, places, and incidents either are the product of the author’s imagination or are used fictitiously, and their resemblance, if any, to real-life counterparts is entirely coincidental.

K
eegan rushed for the door. Stopping briefly in the doorway, she turned to stare at Rourk with slight smile playing across her face. Her chosen was beautiful. The sun gleaming through the open windows reflected off his soft, rust colored hair. His cool grey eyes met hers and her heart raced. It took every ounce of her self-control not to return to his arms.

Donald deserved more than that. She had to find him.

“Keegan, don’t.” Rourk’s voice was filled with pain. He took a single step forward, his khaki pants rustling in the dead silence of the room. Keegan gazed a moment longer, taking in his messy hair, his plain black t-shirt—everything that made him Rourk.

“I’ll be back. I promise.” She tore her eyes from him and she was gone.

It was cool outside. Fall had arrived early for Tennessee; it was usually still hot for Keegan’s birthday. She pulled the long sleeves of her sweater over her hands, shivering. It was still warmer than Alaska.

Keegan glanced around in the hope of seeing Donald, but he was in his tiger form so he was probably long gone. Her family’s property was huge—he had so many places to hide. The woods spread around her, dim and thick even under the bright afternoon sunshine. He could be anywhere.

Frustration and confusion rushed through her body. She wanted to talk to Donald, but she also longed to be inside with Rourk.

She had never expected her bond with Rourk to come back or to hurt Donald, the shy and sweet shape shifter she’d had started to fall for over the past year. The Great Battle —being killed and brought back to life with black magic— severed her bond to Rourk. Afterwards, she couldn’t even remember meeting Rourk, let alone their time together. She’d broken one good man’s heart, and now, with the bond restored, she was about to break the heart of another.

Suddenly, everything had changed again. She groaned, ran her hands through her tangled mess of auburn hair, and headed towards the woods.

After an hour of walking, she knew it was useless. She couldn’t really blame Donald for disappearing; if she had been in his position, she probably would too. Sitting down on the enormous trunk of a fallen tree, she sighed and looked around, rubbing at the goosebumps on her skin. The leaves were turning vibrant shades of red, orange, and yellow, and were just starting to fall off the trees. She grabbed a leaf from the ground at her feet and spun it around between her fingers.

It was hard for her to believe a year ago today on her seventeenth birthday her life path had changed so dramatically.

Suddenly, she felt fur rub up against her arm.
How had he snuck up on her?
She turned and rubbed his head with both hands, giving him a sad smile.

“Turn back into your human form so we can talk,” Keegan pleaded.

The tiger shook its head, his feet shuffling among the leaves as he circled her.

“Fine.” She closed her eyes, letting her hands rest in her lap. “I’m so sorry. I really never dreamed this would happen. You know an elf’s bond to their chosen is too strong to fight. I’ve never heard of an elf that was able to resist their chosen. My aunt Brigid tried for a while, but even she gave in.”

The tiger lay down at her feet, warming them. She opened her eyes. His big blue eyes were sparkling and a tear ran down his face. She moved to wipe it away, but he jerked his head back.

“I could lie to you and tell you that we can try,” she told him quietly. “I think we both know it would not work. It would just be prolonging the inevitable. Donald, you are very special to me and always will be. This last year that I spent with you gave me some of the happiest times of my life.” Keegan leaned to run her hand through the soft fur of the tiger’s back. “I will never forget the time we’ve had together. I just don’t think it’s fair of me to lead you on. I think we need to accept that our time is over.”

The tiger laid his head between his paws and moaned as if he were in pain, avoiding her eyes.

The tiger rose up to his full form and walked around her body, nudging her as he went. His fur felt so soft and warm against her skin. Keegan wrapped her arms around the big cat’s neck and pulled him close to her. It sounded as if he were purring.

“I’m sorry.” Keegan wiped her tears with one hand, still clinging to him.

The tiger pulled away. He let out a loud roar that echoed through the trees and sprinted off, his powerful body moving so fast he was gone before she knew it. Keegan’s heart ached at the thought of causing such pain to someone she cared for. She hoped someday he would be able to forgive her.

Once he was out of sight, she slowly made her way back to the house. She wasn’t sure she was ready to face Rourk. Although, just thinking of him made her pulse race and her face flush. As much as she cared about Donald, he had never had this affect on her. As she reached the door, her stomach was in knots. She took a deep breath before she pushed the heavy wooden door open.

Thaddeus and Rourk were sitting in the living room when she walked in. Rourk’s brow was furrowed, his hands gripped his thighs. She met his gaze, and saw his concern melt into relief. He let out a deep sigh, and his body visibly relaxed.

Thaddeus stood up, tugged his hooded sweatshirt down over his blue jeans from where it had bunched against the couch. “I’m going to play Xbox. I’ll see you later, Rourk.”

“Not so fast.” Keegan glared at him, her hands planted on her hips. She wanted to scream at him for keeping his secrets so well, but she tried to calm herself instead. It wouldn’t be nice to freeze him accidentally. “Why didn’t you tell me about all of this? You could have at least given me a warning, or heaven forbid, a choice.”

“You
could
tell me thank you.” Thaddeus raised an eyebrow and gave her one of his famous impish grins.

“You crushed Donald.” Keegan wrapped her arms around herself and looked down at her feet, trying to erase the memory of the tiger’s sad eyes.

“Donald will be fine.” His tone was matter-of-fact.

“How can you be so sure? Did you have a vision?” Keegan looked up, her eyes wide.

“Let’s just say there’s a white tiger in his future. I know it’s hard for you to believe Keegan, but he will get over you,” Thaddeus said sarcastically, and with that, he turned and headed up the stairs.

Keegan was surprised to feel both relief and a pang of jealousy at the thought of Donald loving someone else. She glanced over at Rourk, who had been staring at her silently during the exchange.

“I still don’t think this is fair.” Keegan pouted, folding her arms across her chest.
And I want to know what you’re thinking, Rourk. Can you still love me?

As if hearing her unspoken question, Rourk stood up and crossed the room until he was in front of her. He was bigger than she recalled, and the softness of youth in his features had been replaced by the harsher angles of manhood. It had been almost a year since the last time she saw him. She stared up at his rugged face, thrilled and apprehensive to realize he was there to claim her. Everything about him was intense; his gaze, his muscular body, the tension and energy between them. She looked up into his eyes and knew she would follow him anywhere. The moment he touched her, she allowed her body to melt into his.

He really is mine, this time, forever.

“I’ve waited so long for this day.” His voice sounded rough. He rested his chin on her head and pulled her closer, his strong arms cradling her waist in a way that made her feel special, cherished. It was futile to resist their connection, and she wondered how strong black magic was to counter what she felt in her mate’s arms. She’d been an oblivious fool, but no more.

As of now, their fates were sealed. They belonged to each other.

K
eegan’s mother came through the door with her hands filled with groceries. Her pale cheeks were flushed from the chill outside and her ginger, pixie-style hair was windblown. She stopped mid-step and grinned, balancing the largest of the bags on her hip. “Well, hello Rourk. I hope you are staying for dinner?”

“If it’s ok with Keegan. I would love to stay for dinner. Here let me help you.” He stood from the couch in one smooth movement and crossed the living room. Taking the bags from her mom, he headed towards the kitchen.

Keegan’s mom waited until he was out of earshot, her eyes lit with excitement, and then said, “Keegan! Does this mean what I think it means?”

“You are not happy about this?”

“I don’t know, Mom. It’s all so sudden. I just broke Donald’s heart. I barely know Rourk, but I’m so drawn to him I can’t do anything
but
be with him.”