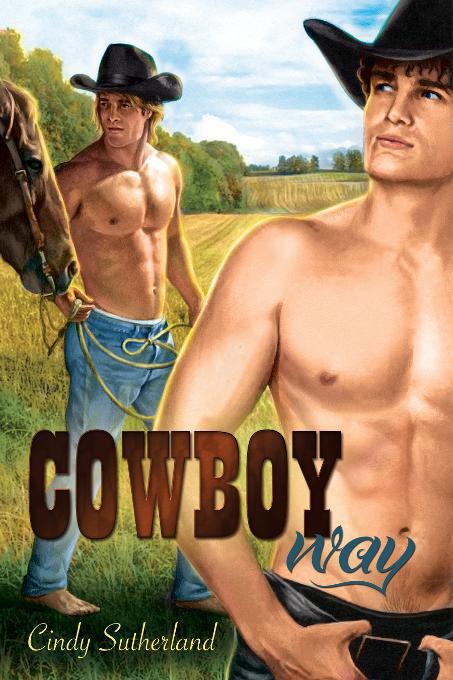 YAN
turned his old truck into the driveway of the ranch and pulled up to the house. He turned off the engine and put his head down on the steering wheel, hoping against hope that this job would work out. He was a day early, but the drive hadnt taken as long as he thought, mainly due to the fact that his truck had decided to keep running, for once. When hed seen the ad for ranch work in Wyoming, hed been over the moon. It had been impossible for him to stay at the place hed been, after one of the other hands had found out he was gay. No one seemed to notice that he had never hit on anyone, or even looked at them. All they cared about was that he was a “fag.” They said it like their mouth was full of shit.

Not all of them had cared, he supposed, but the ones who didnt certainly didnt feel the need to stick up for him, either. One of the things he liked about this job was that there were no other hands, just the owner. Jake Evans said he needed help with some horses he had just acquired, plus some handy work around the place. If Ryan could be there in three days, he could give it a try. Ryan was trying to be optimistic. Maybe his luck had changed

He sat up, looked out the window, and realized that, nope, his luck was worse than ever. Riding up on the most beautiful palomino horse he had ever seen, was the most beautiful man he had ever seen. He appeared to be in his mid-twenties and was wearing very old, very worn jeans that hugged every curve of his lean body and a straw cowboy hat pulled low over his eyes. That was it—no shirt, no boots, nothing. The horse didnt have a saddle or a blanket, just two strong-looking legs clenched around its sides. Ryans mind stuttered, trying not to dwell on the word “bareback.” The rider looked up and saw him sitting there, and Ryans eyes connected with the most captivating pair of blue eyes he had ever seen. Shit, shit, shit. He had to get out of the truck now. He opened the door, grabbed his hat off the seat, and stuck it on his head like armor, before getting out. If this was Jake Evans, he was in so much trouble.

spoke on the phone?”

The man looked at him from on top of the horse for a few seconds before swinging a leg over and sliding off, landing lightly on the ground a couple of feet in front of Ryan. He saw Jake give him the once-over before holding out a hand in greeting. “Good to meet you. Youre a day early, you know.”

Ryan shook his hand before moving back a step. “I know, but things went better than I had hoped. Is it a problem? I could go back to town and get a room for the night, if it is.” He wasnt sure if he wanted him to say yes or no. A night to get a grip on himself might be the smart way to go.
“Nah, its okay. I just would have put shoes on if I knew you were coming.” Jake grinned at Ryan, blissfully unaware of the effect that thousand-watt smile was having on his new hand. “Come on, Ill show you where you can sleep.” He led the way toward the house, which surprised Ryan a little and worried him a lot. Jake turned back. “You gonna grab your gear?” Ryan hoped Jake couldnt see him blush as he turned back and grabbed his bag and his boots out of the back of the truck.
The ranch house was small and had two stories. It had a big front porch with a swing on it, and it was painted red with white trim, and the paint was obviously new. The screen door squeaked a little when Jake opened it, but the inside door was open.
“Follow me. Its just through here.” He went through the living room into the kitchen and through a door. The whole time, Ryan was looking around. It was one of the neatest farm houses he had ever seen. Some of the furniture was old, but serviceable, and it all seemed to fit like it was made for the place. In the kitchen there was a well-used and obviously well-loved table and matching chairs that he was pretty sure were hand carved. And it was spotless. The whole kitchen was. Wow, someone was a neat freak. He pushed through the swinging door, to find himself in a small hallway with a couple of doors. He kept walking and found the first one led to a bathroom that was surprising in its size. It had a small walk-in shower and a huge claw-foot tub. Ryan hurried out of there.
He found Jake in the next room. It was a medium-sized bedroom, comfortably furnished with a queen-sized bed, dresser, and in the corner, there was a sitting area set up with a chair and a table, right by the window. It looked homey and inviting. Jake looked at him. “You comin in? Or are you just gonna stand there all day?” Ryan gave his head a shake and moved into the room. He put his bag on the chair, having left his boots out on the porch. “Nice room, but I have to admit to being a little surprised. Hands dont usually sleep in the house. Your wife wont object?” Ryan was desperately hoping Jake had a wife.
Jake held up his left hand. There was a pale mark in his ring finger, but no ring. “Nope, no wife. And I dont have anywhere else for you to sleep. Theres no bunkhouse, and the barn is barely fit for the horses. Thats one of the jobs we will be getting to, by the way. My room is upstairs, as well as my bathroom, so we wont be in each others way. I am usually up at five, but you can have till six, if you want. Coffeell be on, and Ill get breakfast, if youre up then. If not, fend for yourself. Help yourself to anything in the kitchen, but dont eat all the cookies! Those oatmeal ones take too long to bake, and they are my favorites.” Jake smiled, to show he was kidding. “Anything you need, let me know. Im headin out to the barn, if you want a tour when youre done unpackin.”
He had a bit of a drawl in his voice, and it flowed like honey over Ryans skin. Jake headed for the door that they had come through, at the end of the hall. He stopped for a second and looked back.
“Glad youre here, Ryan. I have a lot to get done before winter sets in, and Ill surely be glad for the help.” He turned and left, and the only thing Ryan could think was, it was a shame to see him go, but so nice watching him walk away.

YAN
looked around and decided the best thing to do was get unpacked, take a deep breath, and go out for that tour. He was going to have to deal with this man every day, so he might as well get a handle on it now. He pulled his clothes out of his bag, put most of them in the dresser, and hung up the few things he owned that needed it. He stowed the bag in the closet, dropping his journal on the table beside the window. Ryan walked into the bathroom, washed his face, and took a couple of deep breaths before walking back the way he came in. He put on his boots and headed out to the barn.

Ryan could not decide if he was happy or sad that Jake had put on a T-shirt and some boots. No, happy, right? He was happy, because there was no way he was gonna stand here and lust after his new boss. “Hey, so lets have the tour.”

AKE
walked over and sat on the railing that surrounded the porch, having grabbed his own beer on the way out. He sat there, back against a post, one foot propped up on the railing, knee bent, sun setting behind him, having no idea of the effect he was having on Ryan. Or so Ryan thought.

Jake had been chatting with the owner of the last ranch Ryan had been on, and the old guy was not as unsympathetic to Ryans situation as hed thought. Hed told Jake that Ryan was a good worker, fantastic with animals, and was someone who always did what he was asked and never turned down extra work. The old guy had been sorry to see him go, but it was either him or firing a bunch of guys he really needed around at the moment, so he had been kind of relieved when Ryan had said he was going. He had told Jake, “Dont make no never mind to me, whether he was gay or not. But I guess to some, its still an issue. Hope it dont matter to you, Mr. Evans, because I would hate to think I jeopardized his chances by telling you that!” Jake assured him that it didnt matter to him in the least before thanking him for his honesty and hanging up.

Letters From Al by Pieper, Kathleen
Taking Tessa by Aria Cole
The Fire Chronicle by John Stephens
So Not a Hero by S.J. Delos
Hallowed Circle by Linda Robertson
The Beast of Blackslope by Tracy Barrett
The Lorax by Dr. Seuss
Taboo2 TakingOnTheLaw by Cheyenne McCray
Peace Work by Spike Milligan
An Indecent Longing by Stephanie Julian