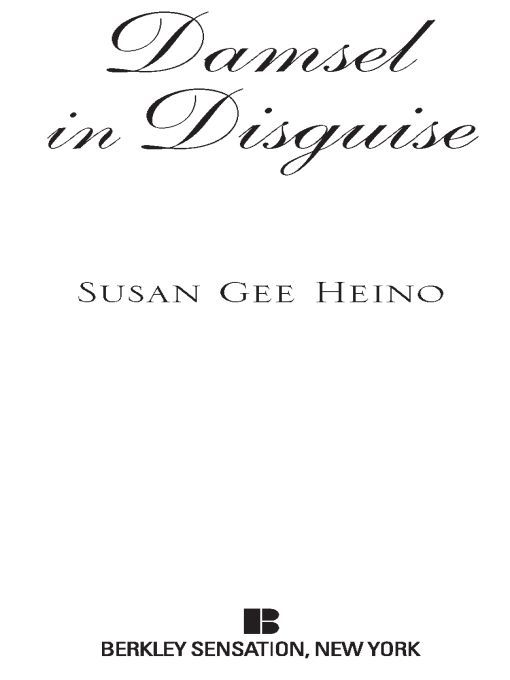 Table of Contents
Title Page
Copyright Page
Dedication
Chapter One
Chapter Two
Chapter Three
Chapter Four
Chapter Five
Chapter Six
Chapter Seven
Chapter Eight
Chapter Nine
Chapter Ten
Chapter Eleven
Chapter Twelve
Chapter Thirteen
Chapter Fourteen
Chapter Fifteen
Chapter Sixteen
Chapter Seventeen
Chapter Eighteen
Chapter Nineteen
Chapter Twenty
Chapter Twenty-one
Chapter Twenty-two
Epilogue
Teaser chapter
“So what do I owe you for the rescue, my lord?” she asked, wriggling into a more upright position, her knees pulled tightly toward her chest.
“You can’t even approach what you owe me, Julia.”
“Very well, then. I’ll simply say thank you and leave it at that.”
Leave it at that?
Indeed, he supposed he should. But he wouldn’t.
“Not on your life,” he said and was foolish enough to touch her.
He stroked her shoulder where the skin was exposed. A bolt of unexpected lightning coursed through his veins and his fingers flexed. She was warm, soft. Somehow he hadn’t expected that. It seemed after becoming Mrs. Fitzgelder she should have turned as cold and serpentlike as her damned husband. But she hadn’t. Her skin was as perfect as he remembered it.
His hand ached for more of her, so he slid his fingers down to hook the blanket. Slowly, he dragged it lower until it hung off her shoulder, and she had to clutch it against herself to remain covered. She glared at him, her dangerous eyes tempting and warning at the same time. He’d be an absolute fool to continue.
Then again, he’d always been her fool, hadn’t he? He’d believed her lies; he’d fallen for her deception. He’d promised to make her his wife, for God’s sake. And even after three years, the woman still occupied his mind and tortured his dreams.
PRAISE FOR
Mistress by Mistake
“Sparkling with superbly crafted characters, humor, and deliciously sexy romance, Heino’s debut . . . is splendidly entertaining.”
—
Booklist
Berkley Sensation Titles by Susan Gee Heino
MISTRESS BY MISTAKE
DAMSEL IN DISGUISE 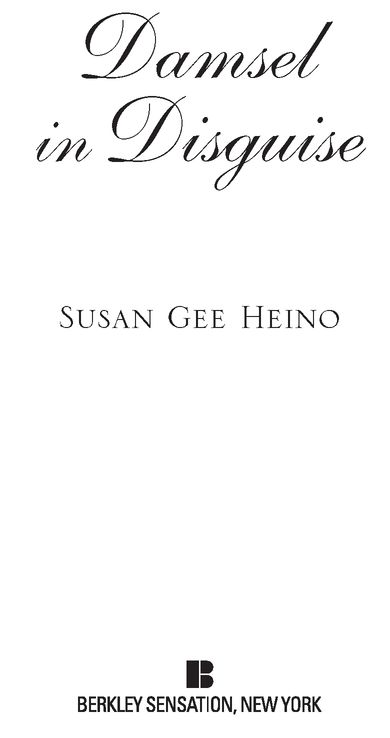 For Jack. I’m so lucky to be the damsel in dis guy’s life.
Chapter One

WARWICKSHIRE, ENGLAND,
15 JUNE 1816
Julia St. Clement had never tried to eat soup through a mustache before. It was dashed difficult, she found. No wonder the awful embellishment had gone out of favor with modern men. Three days now she’d hidden behind the blasted thing, and already she felt weak and malnourished from struggling to strain any decent sustenance through it. Why ever had she let Papa talk her into this dreadful disguise?
Because she’d had no other choice—that was why. Papa had whacked off her long dark hair, fashioned a sorry little mustache from a lock of it, and threw a pack of clothing at her.
“Change quickly,
ma chérie
!” he’d ordered. “Fitzgelder will know my face, but he’s not seen you before. With this, he’ll never suspect who you are.”
And it was true. The man they both feared—for good reason—had been completely deceived. He’d not caught a glimpse of Papa, and Julia had faced Fitzgelder alone. She was properly introduced as Mr. Alexander Clemmons, and the foul little man had no reason to guess his new friend was as much a sham as the shabby facial hair. Papa had escaped. This bloody mustache, it seemed, had saved his life.
And now, God willing, it would save a few others’. Hopefully, Julia’s would be one of them. Provided, of course, she didn’t succumb to starvation first.
“You’ve got soup on your whiskers,” her pretend wife, Sophie, announced with a girlish giggle.
“Of course I do,” Julia grumbled. “I’ve got soup on my chin, soup in my cravat, soup everywhere but in my mouth. Blast this disgusting mustache!”
“But you look quite dashing, you know,” Sophie said as she daintily spooned plenty of soup safely into her own mouth. “Really, it’s a pity mustaches aren’t more the style.”
“I feel wretched, and I look worse,” Julia assured her. “It’s a monstrous thing, and Papa will never hear the end of it when we finally meet up with him again.”
“
If
we meet up with him,” Sophie corrected, her sweet voice quavering. “The coachman has been so slow, miss. What if Mr. Fitzgelder catches us?”
“He won’t. Surely that locket you stole from him isn’t so important he’d come chasing us all the way out here.”
“I didn’t steal it!” the girl insisted for at least the dozenth time. “When he attacked me, it must have torn off in the struggle and fallen into my apron.”
“Little that will matter to him, will it? But I doubt he’ll be looking for you, Sophie. That locket is the least of Fitzgelder’s worries just now. He’s got bigger things on his mind, I’m afraid.”
“Such as killing your friend, you mean.”
Julia shushed her. They were sitting off alone in the crowded common room of the posting house, but still it couldn’t hurt to be cautious. There was no telling who might be listening in. Fitzgelder had men out and about, and they could be anywhere right now. The room was quite full of strangers, not all of them respectable-looking.
“Anthony won’t be killed if I can help it,” Julia muttered under her breath.
Sophie gave a dreamy sigh. “He must be very special to you.”
Lord, she’d quickly disabuse the girl of that deranged notion. “The man is a selfish lout who doesn’t have an honest breath in his body,” she announced. “He very nearly deserves to be murdered.”
Sophie wasn’t swayed. “Then why have we spent the last three days traveling all the way out here to warn him?”
“I said
nearly
,” Julia had to admit. “No one deserves what Fitzgelder has planned for him; murdered on the highway by cutthroats and left there to rot.”
Sophie shuddered, momentarily forgetting her soup. “Are you sure we shouldn’t just find the local magistrate and tell him? I’m not too keen on all this cutthroat business.”
“I told you to wait back in London, didn’t I?”
Now the girl was offended. “What? And leave you to come out here alone? I couldn’t do that, Miss Clement! You saved my life.”
“Well, I certainly didn’t save you from Fitzgelder just so his hired thugs could do you in on the road,” Julia said and stared longingly at the two shriveled potatoes in her bowl. “It’s getting dark. I think we should let the mail coach go on without us and spend the night here.”
“Here? But surely we’re getting close to—what’s that place where your gentleman friend is staying?”
“Hartwood; it’s likely some musty old estate. The lord of the manor had Rastmoor stand up at his wedding, and no doubt they’re all still reveling. Since we’ve not yet passed through Warwick, and as difficult as the roads have been, it’s bound to be another full day’s travel for us.”
Sophie sighed. “Well, I suppose we ought to stay here, then. I just hope, for the sake of that selfish lout you want to rescue, we get there in time.”
“So do I, Sophie,” Julia agreed, making another brave go at the soup. “So do I.”
Almost as irritating as this blasted mustache was the worry that Fitzgelder’s men had already reached the destination and accomplished their goal. True, she and Anthony, Viscount Rastmoor, had not parted on the best of terms, but she’d give anything right now to see that he was alive and well. If he could just walk through that door safe and sound, she’d . . . well, she’d be very relieved.
Then she’d knock him on his arse and ask what in the hell he’d been thinking three years ago when he’d wagered—and lost—her at the gaming table. Good God, as if she was chattel he could own and barter at will! Well, he’d owned her, all right—owned her heart and soul—right up until that night when Fitzgelder marched up to Papa, waving Anthony’s vowels and claiming that
he
was her fiancé now. As if such a thing could be legally binding.

The Troubles by Unknown
Foundation by Aguirre, Ann
The Redeemed by Jonas Saul
Bleeding Heart by Liza Gyllenhaal
Moonrise by Terri Farley
CAPTURED INNOCENCE by Hickey, Cynthia
The Serpent by Neil M. Gunn
Redemption Road: A Novel by John Hart
Return to Paradise by Simone Elkeles
The Realm's Mystics [Mystic Women of The Realm Series Book 3] by Robbie Collins