Read Dancing With the Devil Online

Dancing With the Devil 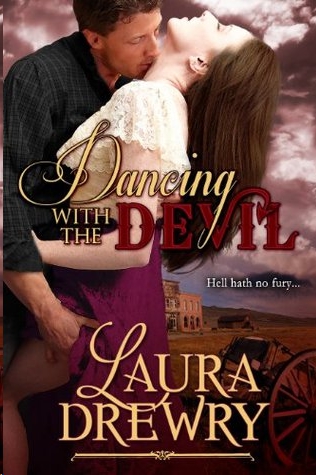 DANCING
with the
DEVIL

Other
Leisure
books by Laura Drewry

Rhea was determined she would not find him charming; she would not smile back at him. But if Deacon wanted to work at her store, she’d darn well work his hide off. “You can organize the stock back here, but you will not, under any circumstances, come out front.”

“Believe me, I’d rather sit down to dinner with Gabriel and his cronies than set foot on the other side of that curtain.”

Rhea sputtered and gaped, and when she couldn’t contain it anymore, she laughed right out loud at the absurdity of it all. Angel Gabriel indeed.

“Can I open up now?” She pushed out of her chair again, but he still wouldn’t let her pass.

“Not yet.” His eyes, still sparkling, held her gaze steady. “Let me be nice to you…”

H
ell hath no fury…” Deacon paused at the bottom of the steps and eyed the ramshackle cabin. The last time he’d seen it, he’d all but expected it to collapse under a great sigh of aged wood and chipped paint.

He should have known better.

Much like its tenant, the house remained standing, determined to survive, daring something—or someone—to try and knock it over.

Sparse patches of weeds and brilliant yellow dandelions dotted the narrow yard, all fenced in by rickety wooden rails that looked like they’d blow over with the first big gust. From around back came the constant clucking of chickens and a faint waft of cow dung.

Ah, to be back among the mortals again.

Deacon had no sooner lifted his freshly polished boot to the bottom step when the front door banged open, and out she blew with twenty-four inches of Winchester leveled at his forehead. Even
she
couldn’t miss at this range.

Gazing down the length of the sleek black barrel, he dared to climb the first step.

“Hello, Rhea.” He moved up one more, eyeing that twitchy trigger finger of hers.

He stopped, chuckled softly. “Just got back, actually.”

Rhea’s coffee-colored eyes narrowed; her heart-shaped face seemed thinner than usual and her lips, usually full and smiling, were drawn together in a tight line. Much of her long brown hair had fallen from its loose braid and now hung in chaotic waves over her shoulders and across her forehead. Her dress, an abominably ugly black rag, draped from her frame as though she were nothing more than a post it had been tossed over.

Deacon frowned. To look at her now, one would never believe she had a waist, let alone curves that could send a man over the edge of sanity.

Shifting the rifle a little, she adjusted her grip and steadied her stance. “What d’you want?”

Best start with something small. He tipped his face up to hers and smiled slowly. “I suppose it would be too much to expect dinner?”

A loud snort ripped from her delicate throat. “The only meal you’ll get from me is a mouthful of lead.”

Deacon fought back a laugh. She’d never been overly concerned about the powers he wielded or what he could do to a little spit of a thing like her. No, that had never been Rhea’s way.

He twirled his black bowler hat casually in his hands, but never took his gaze away from her or her rifle. “That’s not very hospitable of you.”

“If it’s hospitality you want,” she spat, “you best go see your friend Salma.”

He lifted his right shoulder in the barest of shrugs. “She never meant anything to me.”

Another snort. “She meant enough that you took her to bed.”

“Pfft. That’s how it would seem, yes.” He considered moving up a step, but the look in her eyes kept him still. “But I can explain about that and how things have changed.
I’ve
changed.”

The sound of her cocking the rifle echoed across the dry, deserted yard. Deacon backed down the steps slowly, his palms up.

“How about a cup of coffee? That’s not asking too much, is it?”

The first shot sprayed loose gravel across the toes of his shiny black boots. All that time he’d spent buffing and polishing them…What a waste.

The second bullet hit the dirt between his feet. Damn, she could cock that thing fast.

The third shot would have hit him directly in the groin if he hadn’t anticipated it and leapt out of the way.

He almost laughed at the absurdity of the situation, but choked it back when she stopped to reload.

She lifted the rifle and set the sight directly at his chest. “No.”

She squeezed her right eye closed and focused her left on the gun sight. “One…”

“Two…” Her fingers curled tighter around the barrel.

“Thr—” The word died behind the blast of her next shot.

Burning pain ripped through his right shoulder and
sent him staggering back into the fence, the echo of the last shot taunting him as it repeated across the dry land.

Blinking, he frowned at his shoulder, then back at Rhea. Eyes wide with shock stared back at him in disbelief. Her mouth opened in a small
O
, but she didn’t lower the rifle.

After a second, she blinked hard and gave her head a quick shake. “You should’ve moved.” Another blink, this one followed by a stiff swallow.

“I tried!” He pulled a neatly folded handkerchief from his breast pocket and pressed it against the open wound, never taking his eyes off Rhea.

She shook the hair back from her face. “No you didn’t. You could have just…you know…
appeared
…over there.”

“In case you weren’t listening,” he snarled, “things have changed.”

She didn’t look convinced, but her death-grip on the gun loosened slightly. “How?”

His boots were filthy, his jacket was ruined, and
now
she wanted to talk. Women!

“He took my powers…” Good thing the fence was there to lean on.

Deacon dared look away from her, knowing full well she could easily take him down with one more shot and probably would. Damn, his shoulder burned.

“I was supposed to…” His now-scarlet handkerchief seeped blood over his hand and down the sleeve of his ruined jacket. A body only had so much blood, and there seemed to be an awful lot of it flowing down his arm in warm red rivers. That couldn’t be good. “I, um…”

All this blood was enough to make a mortal man queasy. Good thing he wasn’t…Oooh, what was that?

His stomach dipped and shifted, causing an even odder reaction in his knees. He lifted his head to look back at Rhea—and instantly regretted it. The ground beneath him began to spin in slow, lazy circles. Daylight faded to shadows until he could see nothing except a tiny dot of light directly in front of him. And in that dot stood Rhea, the rifle still cocked and ready.

He shook his head to clear it, but that made everything worse. The ground spun faster, the shadows grew darker and tighter, and his stomach threatened to revolt any second. If he didn’t find his balance soon, he’d end up on his backside in the dirt.

“Maybe you should sit down.” Rhea’s voice, guarded, but concerned, seemed a hundred miles away. “You don’t look so good.”

“Don’t…be…” He gripped the fence rail tighter. Each breath was more difficult than the last. “I’m f—”

The son of Satan.

But how…and why hadn’t he moved? He’d always loved to do that disappearing and reappearing thing on her, but he hadn’t done it this time.

And now he lay completely motionless in her yard.
Was he dead?

She blinked hard, shook her head.

There was no way the shots had gone unnoticed, so it would only be a matter of time before someone came to investigate.

That was the problem in a town this small; a person couldn’t burp without everyone knowing about it.

One step at a time, she made her way down the stairs,
barely blinking, keeping the rifle cocked and at the ready. The Deacon she knew would never allow dirt on his clothes, so he was either really hurt or she was in a heap load of trouble.

His bowler hat lay a few feet away, covered in dry Texas dust; his boots were scuffed and dirty from her bullets and from scraping against the ground when he fell. And his jacket…

Oh no, Deacon would never allow blood—especially his own—to stain his precious suit. She pushed the toe of her boot against his hip and then jumped back, braced for his attack.

She did it a second time, but still he didn’t move. Finally she lowered the rifle and nudged the barrel right up against his ribs. Not so much as a flinch.

After another long moment, she crouched beside him, torn between what he deserved, what would make her life infinitely easier, and what she knew must be done.

There had been a time when she was convinced she loved the lying cur and that he loved her. She’d been so stupid back then. Stupid and blind. He’d seduced her with such finesse, she hadn’t even realized it was happening until it was too late.

Rhea shook the memory free and swiped her sleeve across her eyes. If she had any sense, she’d let him bleed to death right there in her yard.

But she’d never been terribly sensible when it came to Deacon.

She crouched over him, frowning at the changes she hadn’t noticed before she’d shot him. His golden brown hair, always kept short and neat, tickled the tops of his ears and curled slightly against his neck. His usually smooth complexion now creased slightly across his forehead and around the corners of his eyes. Rhea’s fingers
twitched against the urge to touch his square jaw, to caress the bone structure she’d memorized so thoroughly and ease each one of those lines from his perfect face.

Native American Songs and Poems by Brian Swann
Tyler, Lynn - Be With Us (Siren Publishing Ménage Amour) by Lynn Tyler
The Plum Tree by Ellen Marie Wiseman
Black Dawn by Rose Wulf
Murder in Thrall by Anne Cleeland
What You Wish For by Fern Michaels
Every Heart a Doorway by Seanan McGuire
Death's Privilege by Darryl Donaghue
Guarding Sophie by Julie Brannagh
Blackouts and Breakdowns by Rosenberg, Mark Brennan