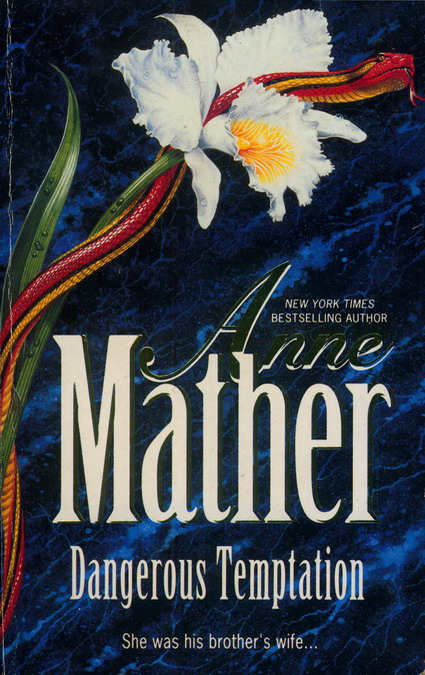 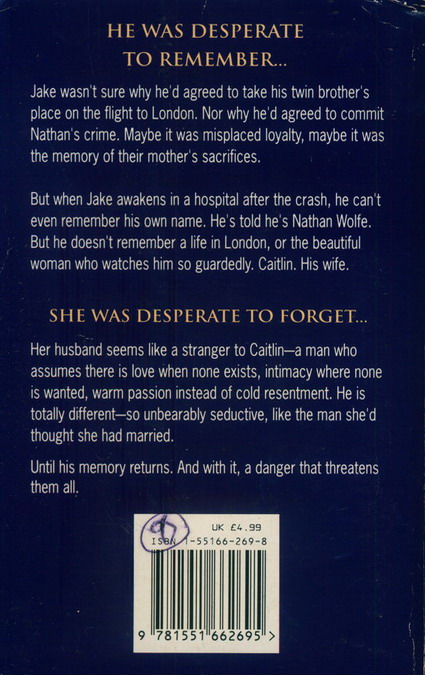 Why was she calling him Nathan?

That wasn't his name. It was his brother's name, for God's sake!

He stared at the woman beside him with tormented eyes. She was familiar—yet not familiar. Where was he? And more to the point, what had he done?

Forcing himself not to panic, he quickly glanced around him. He was on a bed, of course, but he had known that. But whose bed was it? He didn't recognise it. Nor the room around him—though he felt he should.

"Are you all right, Nathan?"

There she was again, calling him by his brother's name, her soft hands like silk against his jaw.

He looked at her again. His lips parted to tell her she'd made a mistake, that whatever she'd thought, he wasn't Nathan, but that he'd be more than happy to continue to take his place. She was so beautiful. He'd always thought so. Ever since his brother had shown him her picture, right after the wedding.

Their wedding… He swallowed. He knew who she was. She was Caitlin. Caitlin
Wolfe
. His brother's wife.

Anne Mather is a
New York Times
best-selling author with an outstanding 60 million books in print. Her first novel, CAROLINE, was published in 1966 and met with immediate success. Since then she has written more than 130 novels all of which have received international acclaim. Her novel LEOPARD IN THE SNOW was made into a film. Anne Mather was born in the north of England and still makes her home there. She is married with two children.

MIRA is a registered trademark of Harlequin Enterprises Limited,

The afternoon was hot and sultry. A storm had been threatening earlier, but it had moved away, leaving overcast skies and air as thick as cotton wool. It was an effort even to breathe, and most people were taking it easy until the heat of the day had passed.

In the small hospital the maternity ward was quiet now. The babies had been fed and changed, and put down for their rest, and the new mothers were taking a well-earned break, relaxing on their beds. Most of them were dozing, catching up on their sleep, although the heat in the narrow ward was stifling even with all the windows open. But in Blackwater Fork, North Carolina, air-conditioning was still a luxury.

In the end bed, nearest the swing doors, Alice Connor shifted restlessly. Unlike the other mothers, she was not enjoying the chance to get some rest. Being able to rest meant she was able to think, too, and right at this moment Alice didn't want to think at all.

Beside her, in twin bassinets, her two sons slumbered peacefully. Alike as two peas in a pod, the babies knew nothing of their mother's turmoil. They'd been fed, their diapers were clean, and they were content. In their world, they had no worries, not even where their next meal was coming from.

But for Alice, life was not so simple. Having another baby at all was going to mean the rest of them would have to make sacrifices; having
twins
was an eventuality she'd never even considered.

What Fletch would say when he came back from his trip, God alone knew. Persuading him that the child was his had not been easy. Imagining what he'd say when he found out about the twins didn't bear thinking about. He was suspicious of her already, putting the hex on any man he thought might look at her twice. If he ever found out about Jacob—

Her breath caught in her throat, and turning it into a cough, so as not to alert the other women in the ward of her uneasiness, she rolled onto her side. Now she could see her babies, small and vulnerable in the well-worn gowns the hospital had provided. But she'd come into the hospital to deliver
one
baby. The gowns she'd brought for just one baby hadn't been nearly enough for two.

It was just as well Fletch was away, she thought gratefully, delivering another load of lumber to New Mexico. It gave her a few days to come to terms with the situation, even if she still had no idea what was going to happen to them all.

At least the babies didn't look like Jacob. Oh, they were dark-haired, of course, just like him, but their small, pouty features were exactly like the other four babies she had birthed. Unfortunately, as far as she knew, there were no twins in the Connor family tree. No twins in the Hickory family tree, either, she thought, wincing at the pun. Whereas Jacob had told her he'd had a twin brother, who'd died just a few days after they were born.

The thought seeded—and was quickly suppressed—that it might have been easier for her if one of her babies had died. She'd have been upset, of course, but that might have made things easier with Fletch. There was no chance that she could have kept it a secret, though. In a little place like the Fork, there was no way to keep a secret like that.

But at least Fletch wouldn't have had to feed it. And there was always the possibility that he might have become attached to the one that remained. After all, he didn't have any sons, only four daughters. She caught her breath. Which was just another reason why she was so on edge.

It was eight years since Joanne, her youngest daughter, had been born, and she and Fletch had agreed then that they couldn't afford any more children. That was why he'd been so furious when she'd told him she was pregnant; so suspicious, too, that the baby wasn't his.

But, somehow, she'd convinced him that it was, even if she had got a beating for her pains. But that was nothing new. Fletch often beat her when he'd had too much to drink. And at least the fact that he drank too much had given her an excuse. She doubted he knew exactly what he did when he'd swallowed more than a quart of whisky.

Things had gotten harder after she'd had to give up her job at the diner. By the time she was six months pregnant, Ben Garrett had decided she was no longer an asset to his business. The timber bosses and travellers who used the diner wanted a pretty woman to serve their needs. Not one boasting a stomach that stretched the buttons of her overall.

These past three months had been bleak. Fletch grumbled all the time about how they were going to continue paying the rent, and he stayed out later and later, drinking and playing cards with his cronies. The girls were needing new shoes for the coming winter, and the eldest, Lisa, was desperate to go to college. But how could they afford that, Alice fretted, when they barely had enough to eat? How were they going to feed one baby let alone two?

One of the babies stirred, small lips sucking at some nonexistent teat, one star-shaped hand unfolding to expose a milky palm. Oh, God, they were so beautiful, she thought, stretching out her hand to touch a downy head. Dark hair clung to her fingers; a soft scalp shaped itself to her palm.

A hand touched her shoulder. "Alice?"

She started violently, turning to face the man behind her with wide, unguarded eyes. "Jacob!" Her mouth was dry, and she looked anxiously over his shoulder. "Oh, God, Jacob, what are you doing here? Do you want to get me hanged?"

"I just heard." Jacob Wolfe's voice was soft and soothing, his eyes moving beyond her stiffening form to where the two babies lay together, their cribs side by side. "Oh, Alice, they're amazing! Why didn't you tell me you were going to have twins?"

Alice looked around the ward with panic-stricken eyes. But thankfully, most of the women appeared to be asleep. Those she knew, or knew her anyway. The others couldn't know that Jacob wasn't her husband. Or at least she prayed they didn't. But that didn't mean that he could stay.

"You've got to go," she said, her voice low and anguished. "You shouldn't be here. If anyone sees you, if anyone recognises you—"

"They won't." Ignoring her fears, the babies' father hooked his hip onto the bed. He took her resisting hands in his. "How are you? They told me at the diner that you'd been admitted last night."

"Hey, there aren't that many twins born around here," he declared softly. "Of course, it's a talking point." He smoothed his thumbs over her knuckles. "I didn't ask any questions. Nobody suspects."

"Fletch will," said Alice unsteadily, drawing her hands out of his grasp. "There are no twins in his family. Mine neither, come to that."

"No." Jacob turned his head and looked almost enviously at the two sons he could never claim as his own. "Are they both strong? Are they healthy?"

Lion Heart by A. C. Gaughen
The Whirling Girl by Barbara Lambert
Time After Time by Elizabeth Boyce
Through the Eyes of a Male Submissive by Lea, Andie
Revealing Revelations by Nero, Ric
Linda Barlow by Fires of Destiny
Daughters of Babylon by Elaine Stirling
Bradbury Stories by Ray Bradbury
Please Me: Parisian Punishment by Jennifer Willows
Dark Voyage by Alan Furst