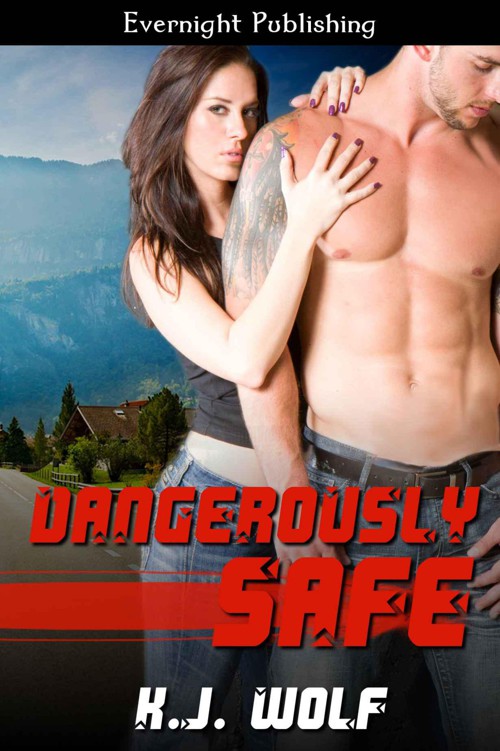 Hannah Monroe pounded her fist against the storm door for the third time. The glass shuddered as she hit it, making her reflection vibrate in the dimming light. Her stomach growled, and she shivered. She wasn’t dressed to stand in the cold, hadn’t eaten all day, and her dinner plans depended on Chris. He needed to get his butt in gear.

At least she’d had the night off from working at the bar. Her boss, Roxy, knew about her hatred of all things Valentine's Day.  She also knew why love was the last thing in the world Hannah wanted in her life.

Roxy had grown up in a violent household with screwed
-up parents, too.  Hannah's folks had ignored her when they weren't putting her down, while her father smacked her mother around until she hit the bottle.  Roxy also knew about the attempted rape of Hannah and did whatever she could to make her feel safe, including keeping her from being exposed to romance's number one holiday.

The last thing
Hannah wanted to do was spend her time watching lovey-dovey couples pretend to give a crap about each other. What a crock.

His truck was parked in the driveway, so she knew he was home. That man never went anywhere unless it was in his truck surrounded by all the things he thought he might need. Chris worked as a carpenter. Apparently you never knew when you’d run into a carpentry emergency and need your tools, stat.

That quirky trait might have bothered others or left them scratching their heads, but it was one of the things she loved most about Chris. He was dependable. Safe. He lived life the way she wanted to feel. Stable. Secure.

She listened for footsteps before she opened the outer door and banged on the interior one. “Damn it, Christopher Worth! Open the door!”

As she raised her fist again she heard the faint muffled sound of steps on hardwood floors. His pace sounded heavy and determined.
Good
, she thought. At least he wasn’t ignoring her anymore.

The door flew open with such force she hopped backwards. She could see Chris’s white t-shirt reflecting what little light was left, but his face remained in the shadows. Seconds ticked by while she waited for him to say something.  He didn’t.

“What do you want?” His voice came out flat and tired.

“I came to see you, Chris. You weren’t answering your phone.” She opened the storm door wide and moved closer. “Come bar hop with me, and maybe we’ll both get lucky.”

Chris leaned into the fading light, and he lowered his chin to look at her. His shadowed eyes looked glassy and cold. She fought the urge to cup his cheek with her hand. “Go away, Hannah. I’m not in the mood tonight.”

She took a deep breath and wagged a finger in his face. “You’re better than this, Chris. She’s not worth it. Stop wallowing and come out with me!”

His hand shot out, and he grabbed her finger. “I’m not in the mood, Hannah,” he snarled. She could smell the beer on his breath.

“Are you drinking? I’ll join you.” She yanked her finger out of his grasp and turned sideways to slink through the narrow opening at his side, sliding along his solid frame. Every nerve ending in her body came alive at the contact. No matter how many years they’d been friends, the thrill of brushing against his body hadn’t faded.

She ignored him, threw her jacket towards the hall closet floor, and strode straight back through his small bungalow house into his kitchen. The cool air hit her bare skin, and she cursed herself for not dressing more appropriately. Chris liked his house cool. Really cool. Every time she came over she’d shudder with chills if she hadn’t worn layers. The white tank top that showed off her red bra underneath and tight jean ensemble had been intended to draw attention to her assets, not keep her warm in the arctic chill of his house.

Light spilled out of the fridge and into the kitchen. She grabbed a beer and turned, smacking into Chris’s solid chest. “Damn it! Don’t sneak up on me like that!”

She reached behind her to close the door until she saw the features of his face for the first time in the light. He looked like shit.

Chris stood at his full height of six-foot-four, but everything about his posture made him appear shorter, from his slumped shoulders to his hanging head. His always perfectly disorganized brown hair now stood pressed to his head in some places while sticking straight up in others.  The dark circles underneath his eyes made the normally vibrant green irises appear dull.

She hadn’t seen stubble on his face since his high school years when he’d wanted to show off his new banner of manhood, but it was back. The urge to run her fingers along his strong, angled jawline and over to his lips consumed her. She cleared her throat.

Seeing him in such bad shape threw her, and she didn’t get it. She wanted to take his pain away.

Taking his clothes off and soothing his sensitive parts with her hands and tongue seemed like the perfect way to do just that.
Dammit
. She cleared her throat.

“What the hell, Chris? You look like crap.” They’d known each other for more than ten years, and he’d never let a breakup get to him like this before. He’d been a little down but not to the point he didn’t want to see her. Nothing had ever shaken him.

Chris was the rock in her life. It was the reason she wanted to keep him as a friend. Sure, he was beyond hot, and the way he smelled like sawdust and cologne had become her favorite smell in the world. But having Chris as a friend was worth way more than a quick roll in the hay, right?

He’d seen her through the toughest years of her life with her parents’ violent fighting, the attempted rape in school, and every other bump in the road she’d gone over since they’d met. She didn’t know how she’d survive losing him if they wandered out of the friend-zone.

Not that he wanted her like that. Nothing he’d ever done gave her any reason to think he was interested in her “that way.” She’d been there for him when he’d broken up with the two girls he’d been serious about and any other tough times in his life. He treated her like one of the guys. It felt right that way. Safe.

He reached behind her for a beer, and his arm grazed the side of her breast as he pulled back. Her nipples strained against the lace of her bra, causing a tug in the sensitive bundle of nerves between her legs.

“I’m tired, Hannah. I’m not up to whatever you have in mind. Just go on without me.”

“Go on without … don’t walk away from me, Christopher Worth!” The fridge door closed as she followed him leaving the room dark. She bumped her shoulder on the wall on her way to the living room. “Damn! What is going on with you?”

Her eyes adjusted to the darkened room, and she saw his outline sitting on the sofa. She plopped down next to him and cracked open the beer. It hissed and foamed over the edge.

“Shit. Sorry!”  Her tongue darted out to catch the foam sliding down the can and over her fingers.

Chris’s index finger touched her chin and turned her face to him. She held her breath. “Don’t worry about it. It’s fine.” He sighed, dropped his hand, and rested his head on the back of the couch. “What are you doing here, Hannah? I’m not great company. You should go out with everybody else.”

She twisted her lips to the side. “Hello? Everybody else has someone else, and it’s Valentine’s Day! We have a deal. I’m not going anywhere without you.”

He closed his eyes and sighed. “Yeah. I know. “

His apathetic response stung more than it should have. Wasn’t he the one who suggested they make a pact that whenever they were both single on Valentine’s Day, they would spend it together? It had been his idea, and now he wanted to sulk and regret it. Hell, no.

Any other girl might have taken the hint and walked away. She couldn’t leave Chris like this. And spending Valentine’s Day without him would just plain suck. Pact or no pact, they were best friends. She was there to stay.

“Chris, talk to me.” He didn’t say a word. She was going to need the help of alcohol to keep her cool with him. The cold beer hit her stomach, chilling her body another degree. Wiping her mouth with the back of her hand, she set the can on the table with a thump and moved to get another from the fridge. Chris placed his hand on her arm to stop her. Butterflies fluttered in her stomach.

“If you’re staying, you’re drinking the good stuff with me.” He reached over the armrest, and she heard sticky plastic pulling apart. There was a cooler next to him.

Chris turned on the lamp behind the sofa before he plunked two frosted shot glasses onto the coffee table. He poured from a tall, dark bottle and handed one to Hannah. She lifted it to her nose. “Jameson?”

He grinned. “Is there any other whiskey? Now down the hatch like a good girl,” he said before throwing his drink back into his mouth.

Hannah could drink like the rest of the guys most of the time, but something about that particular brand of whiskey got to her and fast. She also had an empty stomach. If she threw it back like Chris, she’d be a slobbering mess in no time. She knew she should take her time and sip it, but he was watching and waiting. The silence between them grew into an unspoken challenge.

The Scarlet Derby and Midnight Jay - Volume 1: Gallery of Rogues by Mike Cervantes
Jabberwocky by Daniel Coleman
The Transatlantic Conspiracy by G. D. Falksen
A Scone To Die For (Oxford Tearoom Mysteries ~ Book 1) by H.Y. Hanna
The Desperate Deputy of Cougar Hill by Louis Trimble
Inside Out by Grayson Cole
A Perfect Grave by Mofina, Rick
Finding Home (Montana Born Homecoming Book 2) by Snopek, Roxanne
The Unfaithful Queen: A Novel of Henry VIII's Fifth Wife by Erickson, Carolly
Flight from the Dark by Joe Dever