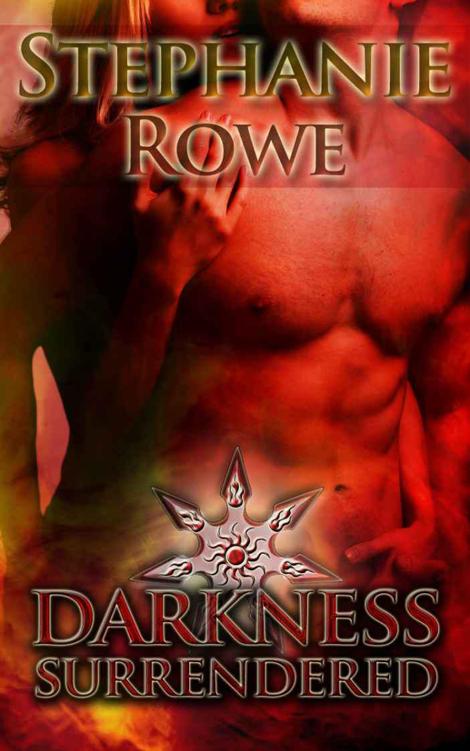 Sneak Peek: KISS AT YOUR OWN RISK

The Order of the Blade

“Book three of the Order of the Blades series is…superbly original and excellent, yet the passion, struggle and the depth of emotion that Ana and Elijah face is so brutal, yet is also pretty awe inspiring. I was swept away by Stephanie’s depth of character detail and emotion. She bared the souls of her characters allowing us the privilege to not only see and feel the characters, but to understand them… This was much more raw, more fierce and many ways more real compared to the characters that we’ve previously known and loved (who we still see and continue to enjoy in
Darkness Surrendered
).” ~
Becky Johnson,
Bex ‘n’ Books!

“[D]ark, edgy, sexy … sizzles on the page…sex with soul shattering connections that leave the reader a little breathless!...
Darkness Seduced
delivers tight plot lines, well written, witty and lyrical - Rowe lays down some seriously dark and sexy tracks. There is no doubt that this series will have a cult following. ” ~
Guilty Indulgence Book Club

“
Darkness Seduced
is a fabulous story with all the right elements: a strong sexual attraction, a struggle against that attraction, a tender love, a horrendous battle against unimaginable evil and a fight to save the world. You’ll love Lily and Gideon. This is the kind of story you can’t put down because you’re so anxious to see what happens next.” ~
Jeanne Stone Hunter,
My Book Addiction & More

“Dark paranormal romance with passionate warriors, a cursed destiny, heartbreaking sacrifice and a gripping storyline. What I wouldn’t give to hear the “crack” of a Calydon warrior’s weapon as he protects me...swoon!” ~
Sharon Stogner,
Love Romance Passion Reviews

“A fast-paced plot with strong characters, blazing sexual tension and sprinkled with witty banter,
Darkness Awakened
sucked me in and kept me hooked until the very last page.” ~
Literary Escapism

“Stephanie Rowe does it again!
Darkness Awakened
is an exciting journey full of fast and furious action, sizzling attraction, bad-ass Immortals and strong women with the power of Illusion. Immerse yourself in this fascinating new world and don’t be surprised if you never want to leave!” ~
Book Addict,
When Pen Met Paper Reviews

“Rarely do I find a book that so captivates my attention, that makes me laugh out loud, and cry when things look bad. And the sex, wow! It took my breath away. The author keeps the tension high from page one. The pace kept me on the edge of my seat, and turning the pages. I did not want to put this book down...
[Darkness Awakened]
is a must read.” ~
D. Alexx Miller,
Alexx Mom Cat’s Gateway Book Blog

“Darkness Awakened
unfurled a two thousand year old history and mythology. Full of action and suspense, I couldn’t stop turning the pages!
Darkness Awakened
is... wait for it... dark. But, underneath the darkness is the promise of light. Faith and love that can overcome fate. Don’t miss out on this fabulous adventure!” ~
Tamara Hoffa,
Sizzling Hot Book Reviews

All rights reserved. No part of this publication may be reproduced, disseminated, or transmitted in any form or by any means or for any use, including recording or any information storage and retrieval system, without the prior written consent of the author and/or the artist. The only exception is short excerpts or the cover image in reviews.

Please be a leading force in respecting the right of authors and artists to protect their work. This is a work of fiction. All the names, characters, organizations, places and events portrayed in this novel or on the cover are either products of the author’s or artist’s imagination or are used fictitiously. Any similarity to real persons, living or dead, is purely coincidental and not intended by the author or the artist.

For all the people who thought they’d never make it, but refused to give up anyway, and for all the people still fighting the battle. The power of perseverance is extraordinary. You rock. Don’t ever forget it.

Special thanks to my core team of amazing people, without whom I would never have been able to create this book. Each of you is so important, and your contribution was exactly what I needed. I’m so grateful to all of you! Your emails of support, or yelling at me because I hadn’t sent you more of the book yet, or just your advice on covers, back cover copy and all things needed to whip this book into shape—every last one of them made a difference to me. I appreciate each one of you so much! Special thanks to, Jeanne Hunter, Sharon Stogner, Jan Leyh, Summer Steelman, Teresa Gabelman, D. Alexx Miller, Holly Collins, Janet Juengling-Snell, and, Jenn Shanks Pray. There are so many people I want to thank, but the people who simply must be called out are Denise Fluhr, Alencia Bates, Rebecca Johnson, Karen Roma, Nicole Telhiard, Denise Whelan, Tamara Hoffa, and Ashley Cuesta. Thank you also to the following for all their amazing help: Judi Pflughoeft, Deb Julienne, Julie Simpson, Mary Lynn Ostrum, Shell Bryce, Jodi Moore, and Mariann Medina. You guys are the best! Thanks so much to Pete Davis for such an amazing cover, and for all his hard work on the technical side to make this book come to life. Mom, you’re the best. It means so much that you believe in me. I love you. Special thanks also to my amazing daughter, who I love more than words could ever express. You are my world, sweet girl, in all ways.

Don’t you dare die on me, Elijah. I’m coming.

Caked in dust, her muscles quivering from exhaustion, Ana Matthews willed herself up the hill, her feet slipping on the loose shale. The rocky incline hadn’t seemed big twenty-seven hours ago, but now it felt like a ruthless mountain, taunting her, grinding her into capitulation.

Ana fought against despair as she grabbed small boulders to pull herself up the steep slope. She and the eight remaining Calydon warriors from the Order of the Blade had been searching for their teammate Elijah Ross since yesterday at dawn. They’d found no sign that Elijah had survived when the maze of tunnels below ground had collapsed.

But dear God, it was getting hard to have faith.

The cast on Ana’s right foot banged against the rocks, her muscles so fatigued that she could no longer summon the strength to keep the plaster from dragging in the dirt. The plastic bag she’d had over it was long shredded. She could feel sharp pain on the bottom of her foot from the pebbles that had worked their way in and were grinding into her skin with each step.

There was a faint trickle of blood staining the cast below by her little toe. Her palms were scraped and covered in dirt, just like her feet.

She didn’t bother to wipe them, despair accentuating her exhaustion as she crested the hill and saw the sinkhole that stretched more than a mile across the Oregon high desert. Somewhere beneath the thousands of tons of rubble was Elijah, one of the three oldest living members of the Order of the Blade. Buried alive because she’d failed him…twice. Her soul mate, the male she was destined to be with, dying at her hand. How could he still be alive? She had no idea, but there was no way she was going to fail him a third time.

She was going to search for him until she found him, no matter what. There was no other option.

Ana clasped her hands atop her head, her legs shaking with fatigue as she watched Quinn Masters and Gideon Roarke, the two Order members who were blood bonded to Elijah, making the same measured path across the sinkhole as she was. Like Ana, they were trying to use their mental connection with Elijah to locate him beneath the dirt.

But after over a day of vigilant searching, they hadn’t found him, and she saw by the hunch of their shoulders that they were losing hope. If they didn’t find Elijah, the future was so grim.

The forbearer of the Calydon race, a man who’d tapped into the demon taint that coursed through the veins of all his descendants, had nearly destroyed mankind two thousand years ago. Three days ago, he’d escaped from his prison during the battle that had buried Elijah.

Ezekiel was free, with two thousand years of bitterness to twist his already evil mind, and the only being who had the chance of stopping him was Elijah. Without Elijah, there was no hope, no future, and no respite for anyone.

But for Ana, Elijah’s death meant so much more, a failure that was slowly, inexorably eating away at her soul. That moment when Elijah had looked into her eyes, and she’d seen the anguish and pain in his soul, her heart had broken for him. He’d had the chance to run, to save himself from the monster who’d had him trapped. But he’d chosen not to escape, because he’d been unwilling to leave her behind with the psychopath who’d been beating her so badly.

Elijah had stayed to protect her, and then Ana’s illusion had brought him down in a brutal reward for his heroic decision. God, the illusion she’d created that night had been terrible, a horrific hell.

As an Illusionist, she was “gifted” with the ability to create illusions, false images powerful enough to kill even the strongest Calydon. She could create an illusion of a wolf ripping a man’s throat out, and the man would believe it was true and shred his own throat with his hands, trying to pry the jaws of the wolf off his neck. Her illusions were so powerful that they were virtually impossible to overcome; even if the viewer
knew
they were fake, it would be impossible to convince the mind of it. She was that good.

As a child, she’d been the aberration that could create only good, happy illusions that brought peace and serenity to all those who saw them. Rah, rah, Ana.

But not anymore. Not since the Calydon warrior Nate Tipton had figured out how to tap into the side of her she’d thought she’d been spared. Once he’d kidnapped her and started using her to kill other Calydons, her happy illusions had vanished. Now, the images she created were so horrific, so deadly, and she couldn’t stop them.

The night Elijah had died, as he had held her in his arms, she’d unleashed the most horrifically violent and tragically graphic illusion, a memory that still haunted her. She could still see that look on his face when he’d seen it, so powerful that no mind on earth would be able to break it and convince itself that it was fake. While Elijah had been fighting for his life and hers in the flood of blood cascading from the sky, Nate had slipped in and sliced Elijah’s throat. Nate had used her distraction to kill a man he never would have been able to defeat if Ana hadn’t been bringing him down.