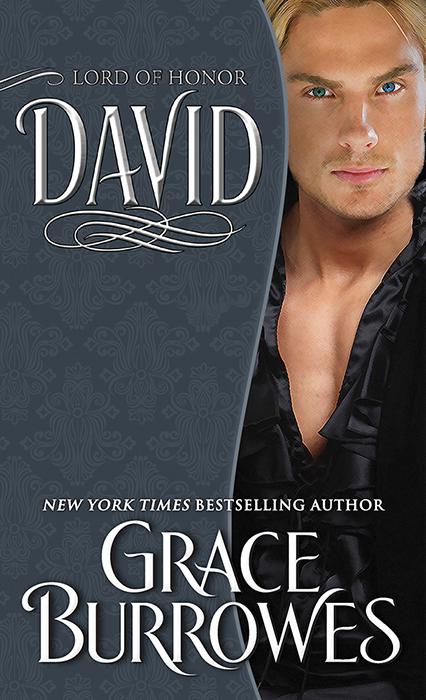 To my ridin’ buddy Donna, friend to me and to my ponies

Owning a brothel, particularly an elegant, expensive,
exclusive
brothel, ought to loom as a single, healthy young man’s most dearly treasured fantasy.

Perhaps as fantasies went, the notion had merit. The reality, inherited from a distant cousin, was enough to put David Worthington, fourth Viscount Fairly, into a permanent fit of the dismals.

“Jennings, good morning.” David set his antique Sevres teacup down rather than hurl it against the breakfast parlor’s hearthstones, so annoyed was he to see his man of business at such an hour—again. “I trust you slept well, and I also trust you are about to ruin my breakfast with some bit of bad news.”

Or some barge load of bad news, for Thomas Jennings came around this early if, and only if, he had miserable tidings to share and wanted to gloat in person over their impact.

“My apologies for intruding.” Jennings appropriated a serviette from an empty place setting and swaddled a pilfered pear in spotless linen. “I thought you’d want to know that Musette and Isabella got into a fight with Desdemona and are threatening to open their own business catering to women who enjoy other women.”

Not a spat, a tiff, a disagreement, or an argument, but a
fight
.

Please, God, may the girls’ aspirations bear fruit.
“I fail to see how this involves me.” David paused for a sip of his tea, a fine gunpowder a fellow ought to have the privacy to linger over of a cold and frosty morning. “If the women are enterprising enough to make a go of that dodgy venture, then they have my blessing.”

Though
dodgy
wasn’t quite fair. London sported several such establishments that David knew of, and each appeared to be thriving.

“Bella told Desdemona you had offered to finance their dodgy venture,” Jennings informed him, taking an audible bite of pear and managing to do so tidily.

“Not likely.” Was there a patron saint for people who owned brothels? A patron devil? “Felicity and Astrid are the best of sisters, but they wouldn’t understand my involvement in that sort of undertaking, and, worse yet, their spouses would find it hilarious. I’ll suggest the ladies apply to
you
for their financing.”

He shot a toothy smile at Jennings, who’d taken a seat without being invited, a liberty earned through faithful service that dated back well before David’s succession to the Fairly viscountcy.

“I could,” Jennings mused, “but having seen the challenges facing my employer, I will decline that signal honor.” He saluted with his pear.

“Such a fate would be no more than you deserve,” David said, pouring Jennings a cup of hot tea and sliding the cream and sugar toward him. “Those women positively fawn over you.”

Jennings lounged back, long legs crossed at the ankles as he devoured another bite of perfect pear. He managed to look more dangerous than attractive much of the time, but in his unguarded moments, his brown eyes and dark hair could be—and were—called handsome by the ladies. Then too, Thomas Jennings had a well-hidden protective streak roughly equal in breadth to the Pacific Ocean.

Jennings paused halfway around his pear. “Despite your strange eyes, the ladies are unendingly fond of you, too. No accounting for taste, I suppose.”

“Their regard is a dubious blessing, at best. Will you at least accompany me to the scene?” Because the physician in David had to see for himself that matters had been resolved without injury to anything more delicate than feminine pride or the occasional crystal vase.

Jennings rose, pear in hand. “Wouldn’t miss it. I have never been so well entertained as I have since you inherited that damned brothel.”

While David had never been so beleaguered.

When he’d dispatched matters at The Pleasure House—a round of scoldings worthy of any headmaster, followed by teary apologies that would have done first formers proud—he departed from the premises with a sense of escape no adult male ought to feel when leaving an elegant bordello.

As cold as the day was, David still chose to wait with Jennings in the mews behind The Pleasure House for his mare to be brought around. Why David alone could address the myriad petty, consummately annoying conflicts that arose among his employees was a mystery of Delphic proportions.

“I’ve been meaning to mention something,” Jennings said as David’s gray was led into the yard. With a sense of being hounded by doom, David accepted the reins from the stableboy.

“Unburden yourself, then, Thomas. The day grows chilly.” And a large house full of feuding women and valuable breakables sat not fifty feet on the other side of the garden wall.

“Do you recall a Mrs. Letitia Banks?”

“I do,” David replied, slinging his reins over the horse’s head as an image of dark hair, slim grace, and pretty, sad eyes assailed him. What had Letty Banks seen in David’s late brother-in-law that she’d accepted such a buffoon as her protector?

“You sent me to advise her regarding investment of a certain sum upon the death of her last protector,” Jennings went on as a single snowflake drifted onto the toe of David’s left boot. “I did that, and she’s had two quarterly payments of interest on her principle since then.”

David swung up into the saddle, feeling the cold of the seat through his doeskin breeches. “All of which I am sure you handled with your customary discretion.”

Jennings sighed. “I have.”

From his perch on the mare, David studied Thomas, a fellow who, on at least two occasions, had wrought mortal peril on those seeking to harm his employer. “This is a historic day. You are being coy, Thomas.”

Jennings glanced around, making the day doubly historic, for Jennings displayed uncertainty no more frequently than he appeared coy. “She spends it.”

Coy, uncertain, and indirect was an alarming combination coming from Jennings. “Of course she spends it. She is a female in a particular line of business, and she must maintain appearances. Whether she spends the interest or reinvests it with the principle is no business of mine.”

“She’s not spending it to maintain appearances,” Jennings said. “I believe, despite this income, the lady is in difficulties.”

David masked his astonishment by brushing his horse’s mane to lie uniformly on the right side of her neck. He wasn’t astonished that Letitia Banks was in difficulties—a courtesan’s life was precarious and often drove even strong women to excesses of drink, opium, gambling, and other expensive vices. What astonished him was that Jennings would comment on the matter.

“Thomas, I would acquit you of anything resembling a soft heart”—at least to appearances—“but you are distressed by Mrs. Banks’s circumstances. Whatever are you trying to tell me?”

“Might you be less cryptic? If there is looking to be done”—and Mrs. Banks made for a pleasant look, indeed—“then are you not in a better position to do it than I? I’ve met the lady only once.”

Months ago, and under difficult circumstances, and yet, she’d lingered at the back of David’s mind, a pretty ghost he hadn’t attempted to exorcise.

Jennings’s features acquired his signature scowl, which might have explained why the stableboy remained a few paces off with the black gelding. “I haven’t your ability to charm a reluctant female, and my efforts to date meet with a polite, pretty, lusciously scented stone wall.”

Had Jennings noted that the luscious scent was mostly roses?

“You mustn’t glower at the lady when you’re trying to tease her secrets from her, Thomas. You aren’t really as bad-looking as you want everyone to think.”

Jennings took the reins from the groom, and gave the girth a snug pull. “Since coming into that money, she’s let a footman and a groom go, sold a horse, and if I’m not mistaken, parted with some fripperies. She’s reduced to taking a pony cart to market.”

“Thomas,” David said gently, “she is a
professional
. She would likely accept you as her next protector, and her financial worries would be solved. In her business, these periodic lapses in revenue happen. She’ll manage.”

Though the soft-spoken, demure ones usually managed the worst.

Thomas sighed again, a sigh intended to produce guilt in the one who heard it. “I am
asking
you to look into her situation.”

Jennings never asked for anything. He collected his generous pay, occasionally disappeared on personal business, and comported himself as a perfect—if occasionally impertinent and moody—man of business. He was both more and less than a friend, and David was attached to him in some way neither man believed merited discussion.

And really, David could not muster a desire to argue with Jennings on this topic, not even for form’s sake.

“I will look into it,” David said, touching the brim of his hat before trotting off to his next destination.

On this frigid, overcast day, the part of Town where the jewelers’ shops clustered was in want of traffic. David perused the offerings at three different establishments, not seeing anything that appealed for his purpose. At the fourth shop, a less pretentious and ever so slightly musty incarnation of the previous three, he wandered between glass cases of yet more uninspired bracelets, rings, and necklaces, none of which were appropriate to a very young lady.

“She looks lonely to me,” a male voice taunted.

“Lonely?” another man answered. “Or grieving. Does a mistress grieve? Mayhap we should offer her consolation.”

“She grieves the loss of a man’s money,” a third added snidely. “Though look you, my friends, at a woman who is buying herself yet more jewelry when she has no one to give it to her.”

Bullying.
David knew the sound of it, from childhood on. While blond hair fit in well enough, and even some extra height might escape comment, a presumed bastard with one blue eye and one green eye was intimately familiar with bullying in all its forms.

And these three young sprigs were merely warming up.

A willowy brunette stood at the shop counter, her back to David, her reticule and gloves on the case before her. She was the object of this gratuitous meanness, though she knew better than to respond. She wasn’t going to fight or flee; she was instead holding her ground.

David made a pretense of looking over the items in the display, hoping his simple presence would deter the young men from further mischief.

“Don’t suppose this place has anything adequate for the likes of
her
,” the boys started back in. “I heard Lord Amery never denied her anything.”